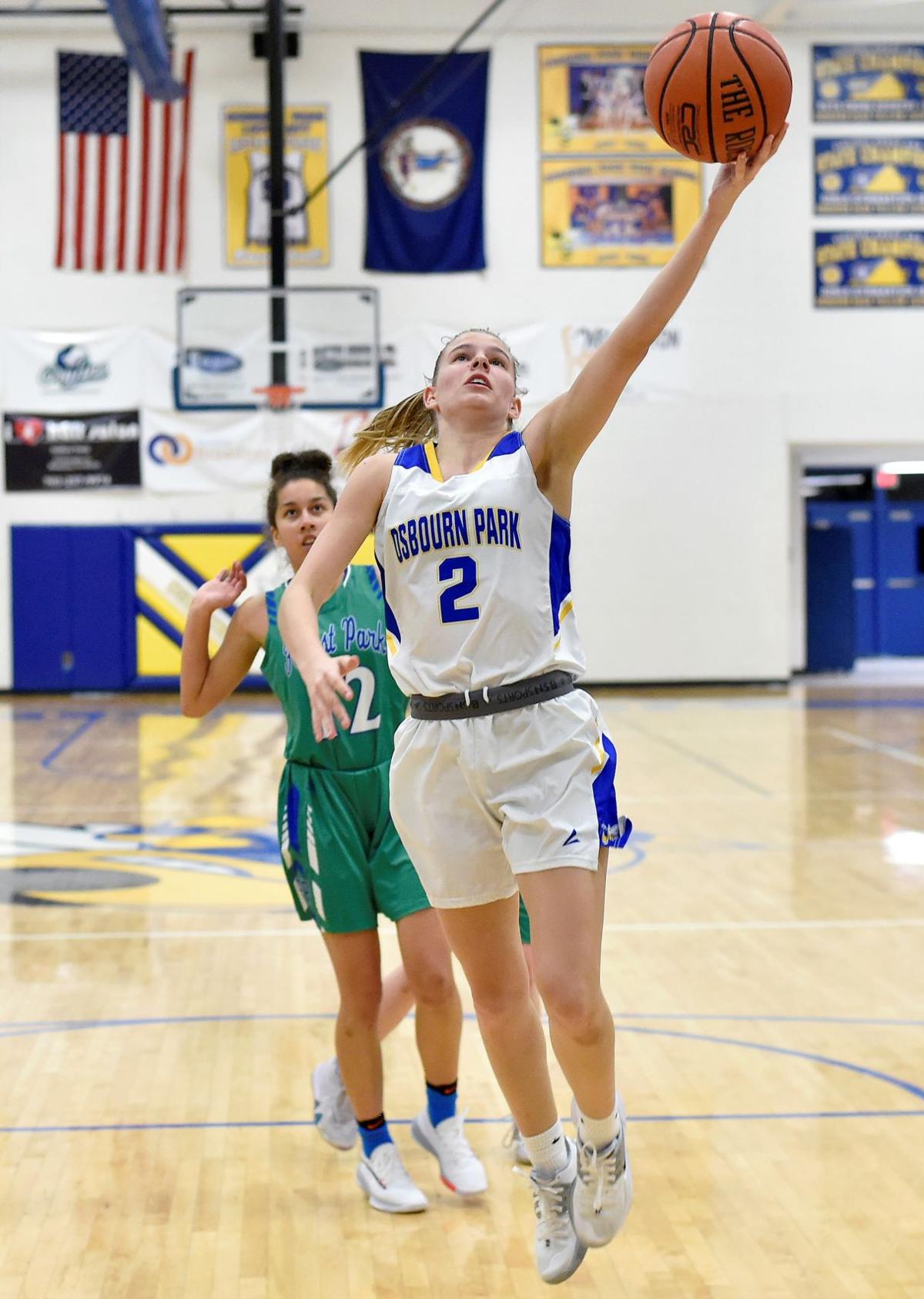 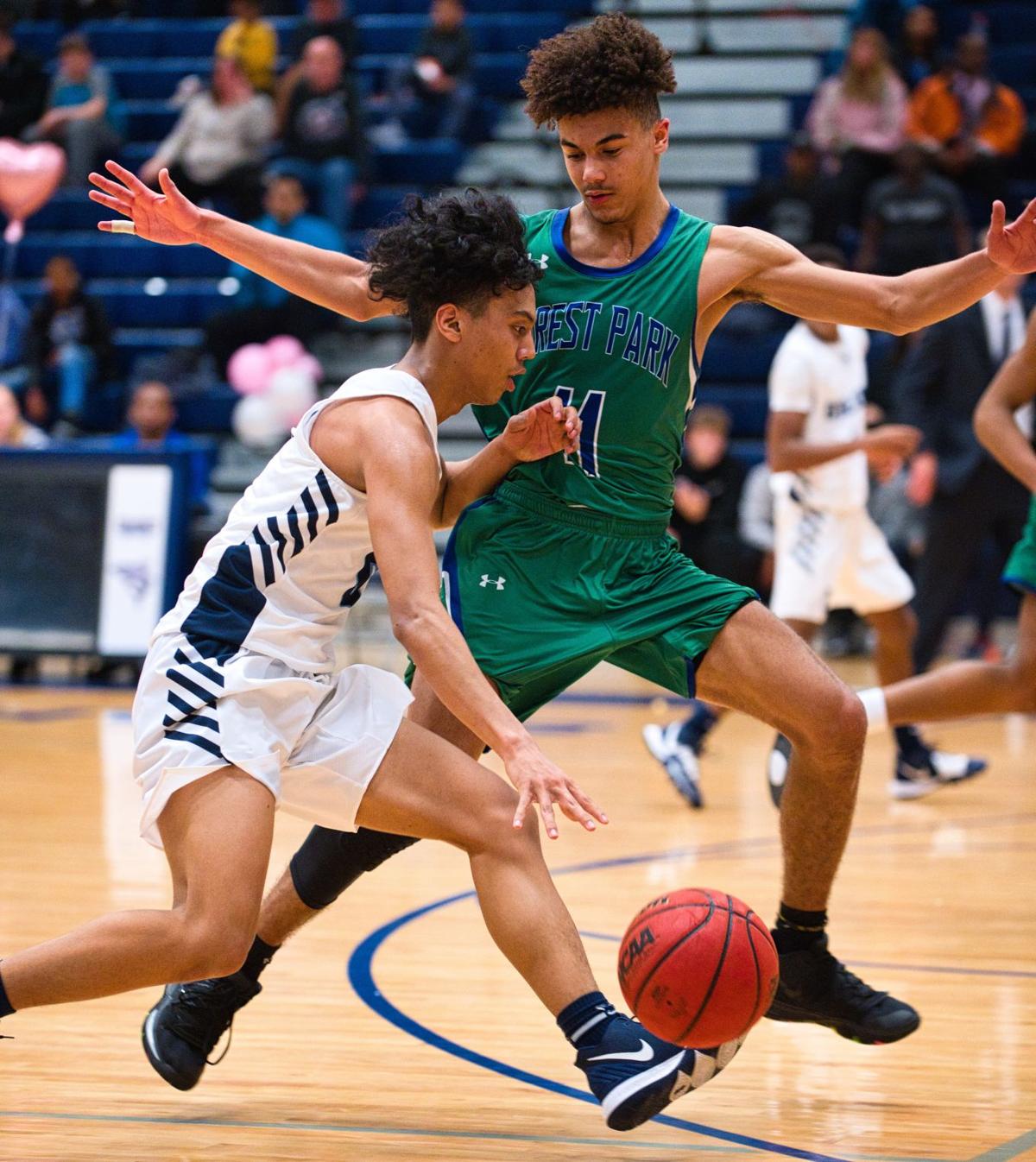 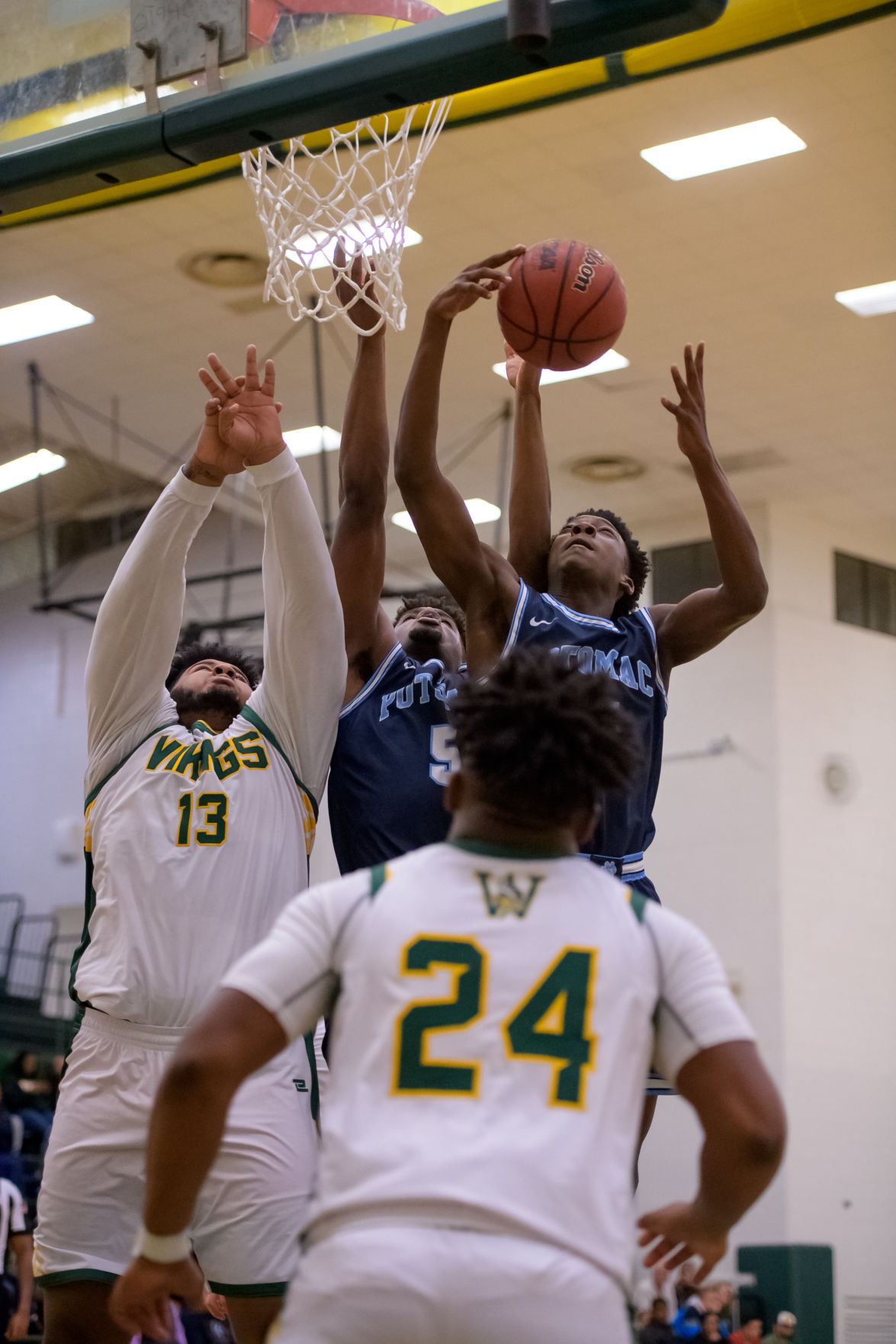 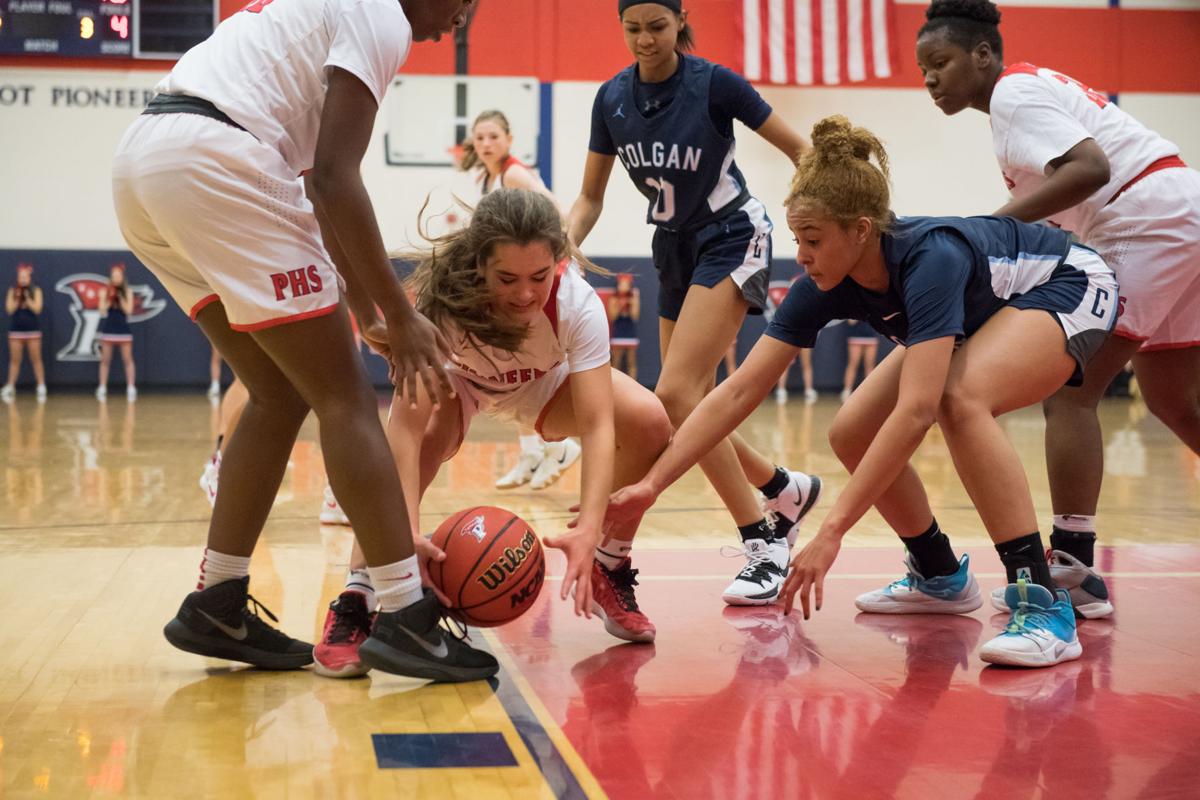 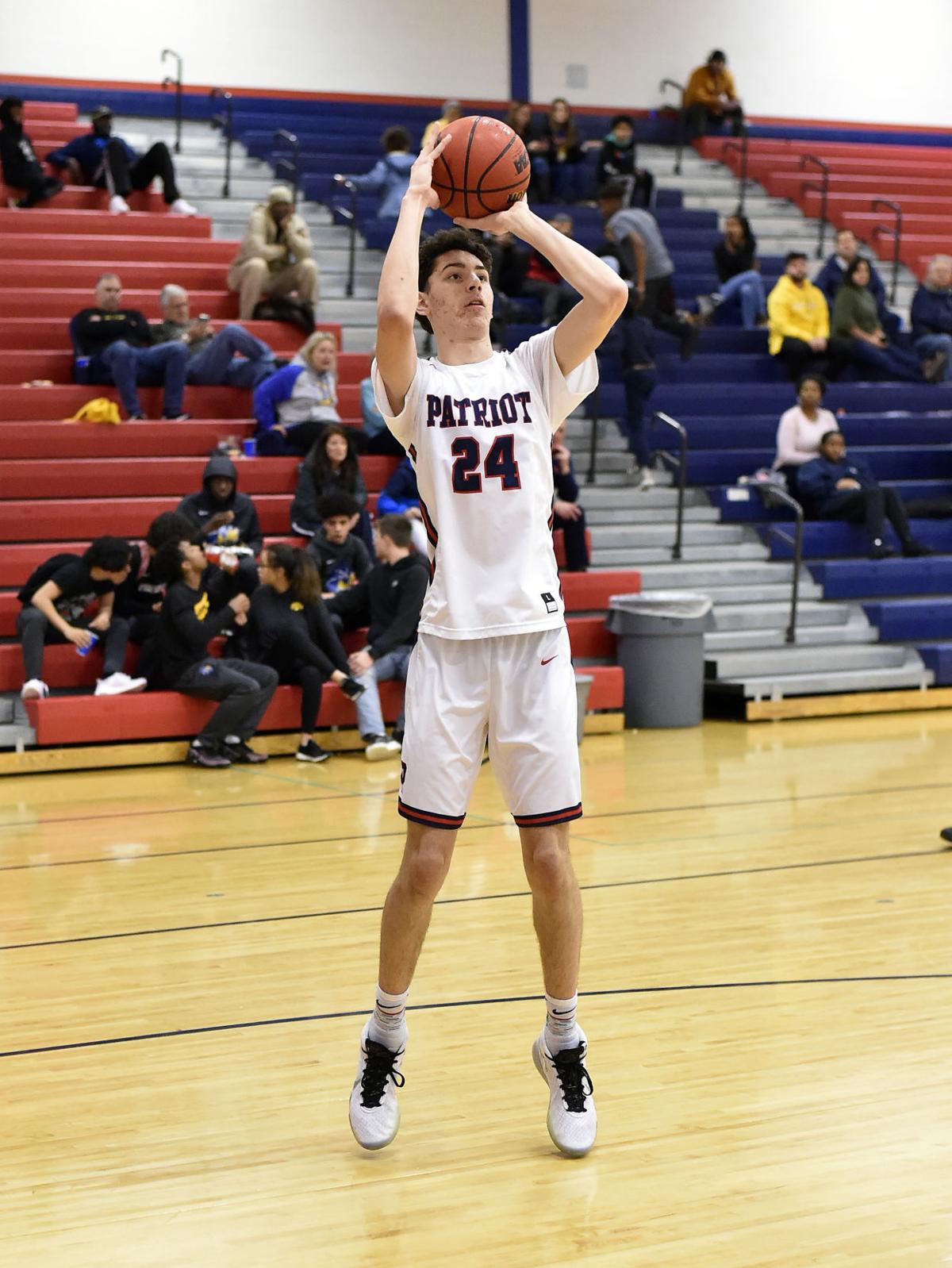 They finished with 12 steals, including four from Mary Caiafa, as John Paul the Great improved its record to 10-5. Washington also had 15 points with nine each from Caiafa and Alissa Turner, while Briaan Wydajewski had six.

Wydajewski added 11 rebounds with five apiece from Turner and Katie Bochonok, while Washington had five assists, Caiafa had four and Wydajewski had three. Wydajewski also had three blocks.

The Osbourn Park Yellow Jackets began the second half of their Cedar Run District schedule Friday with a 47-38 victory over Battlefield’s girls basketball team at home in Manassas.

So they remained undefeated in district play at 6-0 and improved to 13-5 overall by holding an opponent under 40 points for the 13th time in their past 15 games.

For the Bobcats, Kat Jenks had 19 points with 7-for-8 free-throw shooting and Anna Tekampe had five points with four each from Sofia Miller, Julia Mitchell and Reese Burch. Tekampe also had eight rebounds, Miller had seven and Burch had five, while Miller had three blocks.

The Forest Park Bruins extended their winning streak to four games Friday with a 48-40 victory at home over Gar-Field’s boys basketball team.

Kenyani Lee and Kenneth Clark scored 11 points each to give Forest Park a 10-7 record with a 5-3 mark in the Cardinal District while the Indians fell to 2-15 and 0-8. The Bruins built an 11-6 lead in the first quarter, a 24-15 advantage at halftime and a 33-21 lead entering the fourth period.

After dominating Woodbridge’s boys basketball by 41 points in December, the Potomac Panthers needed to rally from a seven-point deficit Friday to beat the Vikings 65-60 at home in Dumfries thanks to a career-high 20 rebounds by Tyrell Harris.

The Panthers fell behind 21-14 in the second quarter, but they rallied for a lead as large as 41-32 in the third period. Woodbridge narrowed its deficit to 60-58 late in the fourth quarter, but Potomac’s Kyle Honore scored the next three points, followed by a pair of Harris free throws, to seal the victory. So the Panthers improved their record to 7-1 in the Cardinal District and 14-3 overall while the Vikings fell to 5-3 and 10-8.

Harris finished with 23 points and 10 offensive rebounds – also a career high – while Honore had 16 points and four assists. Anthony Jackson added 11 points and Caleb Satchell had seven, while Lorin Hall and Rakim Lamarre had five rebounds each. Satchell also had five steals.

Alden Yergey scored 23 points Friday to give the Brentsville Tigers a four-game winning streak with a 63-26 victory over Manassas Park’s girls basketball team at home in Nokesville.

Gabby Garrison added four 3-pointers for 12 points as the Tigers boosted their record to 13-3 overall with a 4-2 mark in Class 3 Northwestern District play. Cai Smith also had 12 points and Cara Vollmer had 11, helping Brentsville build a 27-15 lead by halftime.

The Tigers made 9 of 12 free throws with Vollmer going 2-for-2 and Kendal Meunier and Yergey going 3-for-4 each. For Manassas Park, Cierra Davis has seven points and Navaeh Maynes had six as the Cougars fell to 1-11 and 1-4.

The Patriot Pioneers made 6 of 12 3-pointers Friday to break a three-game losing streak with a 56-42 win over John Champe’s girls basketball team on the road in Aldie.

Taylor Booker went 2-for-2 on 3-pointers to lead the Pioneers with 10 points as they boosted their record to 8-9 overall and 3-3 in the Cedar Run District. Addisyn Banks added nine points, Lauryn Moore had eight, Caitlin Blackman had seven and Emily Casey had five. They helped Patriot take a 13-7 lead in the first quarter and a 27-15 advantage at halftime before entering the fourth period with a 40-28 lead.

Banks also had 13 rebounds, Moore had nine, Blackman had seven, Kayla Amoah had six and Malorie Upperman had five. Upperman added four assists and Blackman had three steals, while adding two blocks each were Booker, Upperman and Moore.

The Forest Park Bruins rebounded from their first loss of month to beat Gar-Field’s girls basketball team 48-19 on the road.

They shut out the Indians in the first quarter, 14-0, to give Forest Park a 7-1 record in the Cardinal District with a 10-6 mark overall after its six-game winning streak ended Jan. 22 with a 53-50 loss to Stonewall Jackson. Against Gar-Field, the Bruins built a 23-7 lead by halftime and entered the fourth period with a 37-13 advantage.

Bella Gomez led Forest Park with 14 points on three 3-pointers while Shania Glenn had seven points, as did Kayla Burton and Ebele Okuadido. Mattie Ross added six points on two 3-pointers and, for the Indians, London Jackson had five points.

The Stonewall Jackson Raiders rebounded from their first Cedar Run District loss of the girls basketball season by beating Osbourn 69-33 Friday on the road.

Against Osbourn, Hannah Williams scored more than 29 points for the third time this winter, finishing with 31 points on 12-for-18 field-goal shooting to give her 22.3 points per game this season. Williams and Maryan Yusuf each made 3 of 5 3-pointers as the Raiders finished 9-for-16 (56 percent) as a team.

Yusuf ended with nine points and Zoe Kanti had 15 with six each from Ana Umana and Amanie Bonchu-Stokes. Kanti made 7 of 13 field goals, while Williams had 10 of Stonewall's 15 steals, seven rebounds and six assists.

The Patriot Pioneers handed John Champe its first Cedar Run District loss of the boys basketball season by beating the Knights 63-52 at home in Nokesville.

So the Pioneers moved into a tie with John Champe atop the district standings with matching 5-1 records while the Knights improved to 13-4 overall and Patriot improved to 14-4. The Pioneers also avenged a Dec. 10 loss to Champe, 61-56, as Chad Watson and Trey Nelson scored 13 points apiece in the rematch.

Nelson also had four assists while Blue and Nelson had two steals apiece. They helped the Pioneers build a 12-6 lead in the first quarter, a 29-21 advantage at halftime and a 44-38 lead entering the fourth period.

Alyssa Andrews scored a season-high 31 points Thursday to give the Colgan Sharks a 70-56 victory over Wakefield’s girls basketball team at home in Manassas.

She boosted her season-scoring average to 21.7 points per game as Colgan improved its record to 10-5 overall and 5-2 in the Cardinal District. Andrews made 10 of 10 free throws to help the Sharks go 19-for-20 as a team, while Kennedy Fuller made 7 of 8 for 22 points and Josie Rodas had 12 points on four 3-pointers.

They helped Colgan compose a 36-24 run in the second half after entering halftime with only a 34-32 advantage.