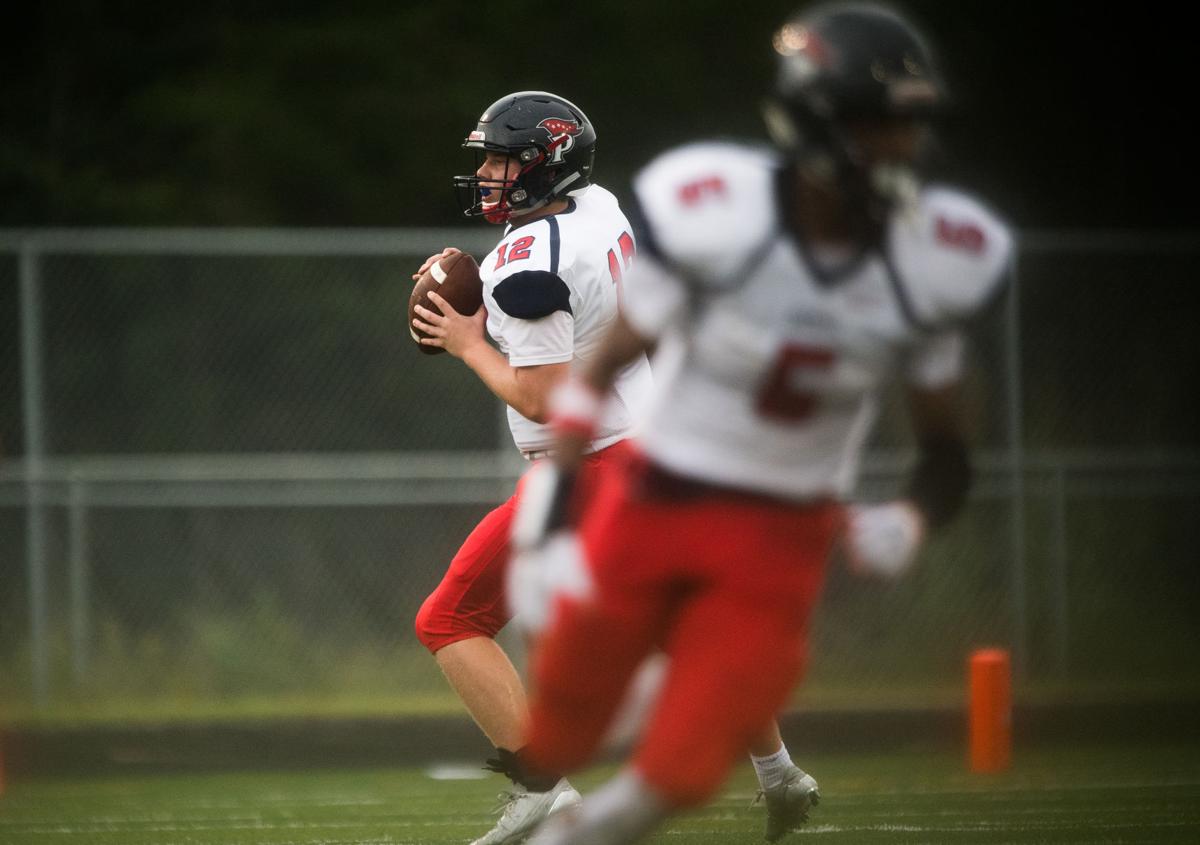 Patriot's Chris Sonnenberg threw for 264 yards and two touchdowns Thursday during a 28-14 win over Battlefield. 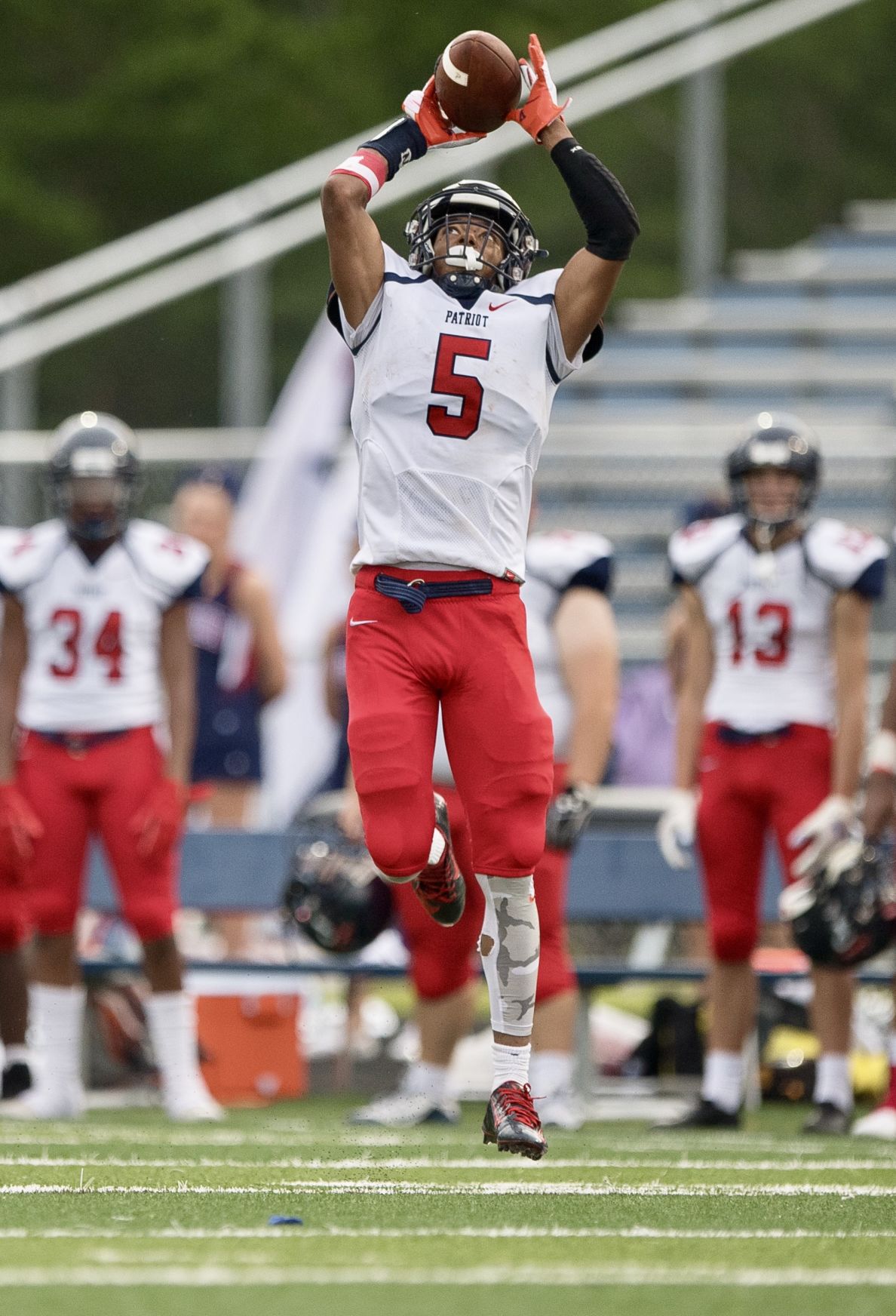 Patriot's Chris Sonnenberg threw for 264 yards and two touchdowns Thursday during a 28-14 win over Battlefield.

The Pioneers began their game against Battlefield with three punts and an interception during the opening 11 minutes of a scoreless first period as the Bobcats often aggressively played underneath routes run by Patriot’s receivers, including Settle. So he ran an out-and-up route about five minutes into the second period with a pump fake by quarterback Chris Sonnenberg helping sell the double-move along the right sideline.

Settle created a lot of space between him and his one-on-one defender before catching the deep pass for a 61-yard touchdown that began a Pioneers’ 21-point run in the second quarter en route to a 28-14 win at home in Nokesville during the regular-season finale for both teams.

Settle knew he would score that first touchdown of the game immediately after catching the pass.

“As soon as I turned around, I saw him in the dust,” Settle said of a Battlefield defensive back. “And after that play, our energy went up.”

Settle began the game running a few 10-yard out routes with a Battlefield defensive back mirroring his cuts toward the sidelines each time. So the Bobcats limited Sonnenberg to 2-for-9 passing during the Pioneers’ first four possessions, but Settle noticed Battlefield’s defensive trend.

“He was the one that encouraged us to run the out-and-up,” Patriot coach Brud Bicknell said. “He came off and said, ‘If we want to throw that, it’s there’” for a big play.

And much more. Settle’s double-move touchdown catch began a 15-for-20 completion stretch for Sonnenberg, which included a 32-yard reception by Jalen Smalls early in the fourth quarter. Smalls made that catch with the Pioneers facing a second-and-25 situation from their own 12-yard line while leading only 21-14 after a 71-yard touchdown drive by Battlefield.

Smalls caught that pivotal 32-yard pass for a first down by, of course, using an out-and-up route. Patriot scored a touchdown eight plays later to build a 14-point cushion that the Bobcats never overcame.

So the Pioneers clinched the Cedar Run District championship for the third consecutive season, finishing 4-0 in league play.

“It means a lot. That doesn’t really happen too often around here,” Patriot senior defensive back J.T. Allen said. “I feel like we accomplished a lot.”

The Pioneers’ victory also potentially improved their seed entering the Class 6 Region D tournament. They qualified for those playoffs thanks to a 7-3 record and the No. 6 spot in the latest Region 6D standings with the top eight teams earning postseason bids.

Battlefield entered the game ranked No. 9 with a chance of claiming a region berth via a win over Patriot. Instead, the Bobcats’ loss dropped their record to 5-5, which kept them out of the postseason for the first time since going 4-6 in 2006, ending an 11-season streak of playoff berths.

“The guys are disappointed,” Battlefield coach Mark Cox said.” There are three games that we thought we should’ve won that we lost.

“Not being in the playoffs, it’s tough when you look back and say, ‘Wow, if we had just maybe put a little bit more effort into it and not made as many mistakes,’” he said.

The Pioneers, meanwhile, didn’t feel too much sympathy after earning only their fifth region bid in history, albeit in seven seasons.

“That felt great,” Allen said of ending Battlefield’s streak. “Always want to do that.”

Regardless, Patriot will likely enter the region quarterfinals as an underdog with a game on the road.

But “I feel like we can make a run,” Settle said, “if we put full effort in.”

Settle certainly did that Thursday while leading the Pioneers’ receiving corps with 95 yards and two touchdowns on three receptions to give Patriot the all-time lead in its rivalry against the Bobcats at 4-3.

In a way, though, it was. Settle logged his first multi-touchdown performance of the season.

“I guess I just like playing Battlefield,” he said.

Battlefield’s offense, meanwhile, finished with 247 total yards. In fact, the Bobcats amassed only 17 yards over their first six possessions, leading to a 21-0 deficit thanks to a Patriot touchdown with 76 seconds remaining in the second quarter.

“The defense was outstanding,” Bicknell said of the Pioneers.

Chris Fritis, Jahmia Marcelle, Da’Vonte Roberts and Tyler Negron each finished with at least one tackle-for-loss, while Allen led Patriot with three tackles-for-loss.

Allen produced two of those tackles-for-loss in a span of less than 40 seconds. As a special teams “gunner,” he launched Battlefield’s punt returner backward for a 1-yard loss midway through the second quarter.

Two plays later, Allen tackled a Bobcats running back for a 2-yard loss. Then, on Battlefield’s next play, the 6-foot-1 Allen leapt up to deflect a pass away while in one-on-one coverage against 6-5 Bobcats tight end Ryan Coll.

Better yet, Battlefield’s next possession began with an Allen tackle-for-loss. That sparked a three-and-out punt by the Bobcats and Patriot took a 21-0 lead only four plays later.

“It’s one of those special [moments] you get every now and again,” Bicknell said of Allen making four pivotal plays in the span of five Battlefield snaps. “He’s physical. He’s smart. He takes good angles to the ball. He’s a good coverage guy.

“He can do a lot of things, so he can make the defense [look good] a lot of times,” Bicknell said. “He’s played great all year.”

Patriot’s coaches put Allen in position to make a lot of tackles Thursday by pushing the Pioneers’ defensive backs and linebackers toward the line of scrimmage against a Battlefield team that often relies on running the ball. So, when Bobcats quarterback Hunter Key threw the ball, receivers often faced one-on-one coverage.

“I felt real comfortable [doing that] until they hit a couple big plays,” Bicknell said with a laugh.

Key threw a 36-yard touchdown pass to Kevin Zieleniewski as time expired in the first half to cut Battlefield’s deficit to 21-6. They again connected for a 31-yard touchdown pass early in the fourth quarter to make Patriot’s lead only 21-14 after a Key two-point conversion run.

Yet Key completed only 10 of 28 passes for 135 yards in the game while often moving out of the pocket, in part by design and in part due to pressure by Battlefield’s linebackers and linemen. Key also led the Bobcats in rushing with only 46 yards on 10 carries with Trajon Richards adding 37 on 11.

“We made good tackles and we kept the edge,” Allen said of Patriot’s defense. “That’s the main thing because they’re kind of a power-running team.”

So the Pioneers won despite losing 90 yards on penalties, compared to Battlefield’s 50, while also losing the turnover battle 2-0 (Mitchell Hong interception, Sean McCarthy muffed punt return recovery). In fact, Patriot needed to convert a fourth-and-5 pass from the Bobcats’ 20-yard line midway through the fourth period to give it a two-possession lead.

Even then, the Pioneers appeared to narrow their deficit to 28-21 with more than two minutes remaining in the fourth, but a penalty negated a 26-yard touchdown pass from Key to C.J. McDonald. That infraction led to a Battlefield turnover on downs, which clinched Patriot’s victory.

“We had our chances,” Cox said. “But our guys put up a good fight tonight. I’m proud of the way they played. … Our guys never quit and they played their hearts out.”