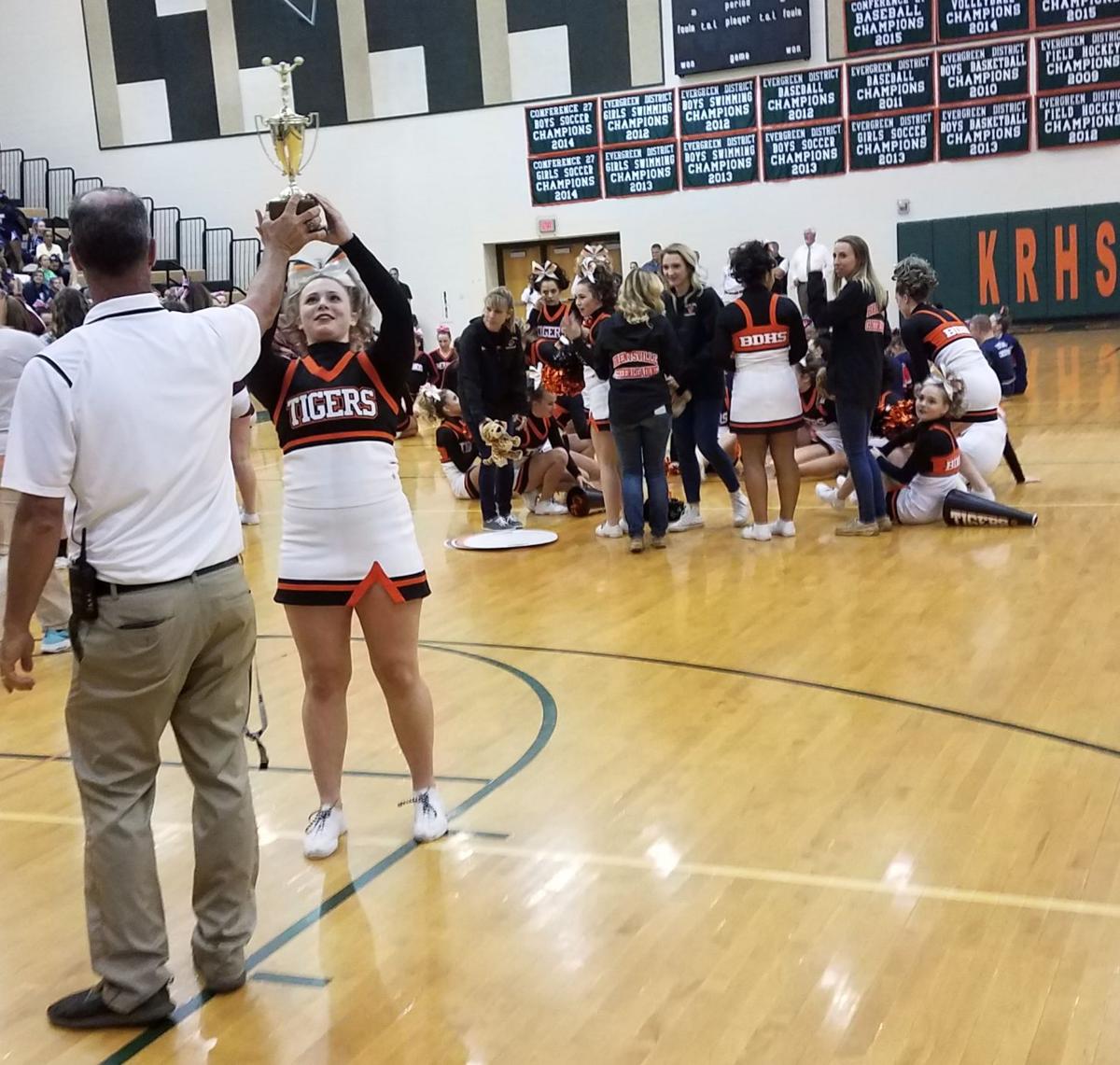 Her orange and black soft toy was the latest in a long line of tiger talismans that Witt has carried to cheer events since early in her 18-year tenure at Brentsville.

“I started it because the original group [of cheer girls] just was having trouble with spirit and energy,” she said after winning the Class 3 Northwestern District championship at Kettle Run High, where Liberty claimed the district’s Class 4 title. “So I gave them a tiger to carry and remember: ‘You need to make sure you have your tiger spirit all the time.’”

Something has certainly given Brentsville sustained success, so why not give those tiger trinkets a smidgen of credit? Brentsville won four consecutive Conference 28 championships, 2013-1016, before switching to the Northwestern District this season and continuing the streak.

“We’ve been very fortunate to do very well throughout my years,” Witt said. “I’m very blessed to have such hard working and talented kids.”

Although Liberty co-coaches Katie Waddle and Alicia Schrank don’t have a comparable good-luck charm, they’re helping the Eagles build a legacy similar to Brentsville’s. The Eagles’ Class 4 district title Wednesday gave them a third conference-level championship in the past fourth seasons.

They won a Conference 22 championship in 2016 and 2014. Liberty also finished last season as that 4A state runner-up, giving the Eagles their fourth top-three state finish in program history. They previously won the 2001 and 1999 AA state titles with a state runner-up finish in 2000.

An eight-year state drought followed, but Liberty seems to have revived its program recently. In fact, Wednesday, the Eagles finished with a higher score than Brentsville during the Northwestern District meet, which included seven teams in the Class 4 division and six in Class 3.

“They believe more in themselves [the last few years] than we have in the past,” Waddle said of the Eagles. “We talked a lot last year about a legacy.

“We put on them: ‘We are a program, and you have a name to uphold,’” she said. “There’s a lot of pride in that. They are proud to be Liberty cheerleaders. I think that has a lot to do with it.”

During the first round, Brentsville led the 3A division with a score of 215.5 with Manassas Park fourth at 164, but due to the new VHSL alignment, all six 3A Northwestern teams advanced to region play while only four of the seven 4A teams moved on.

In the district’s Class 4 first round, Liberty’s 216 score led with Sherando second at 213, James Wood third at 211.5, Kettle Run fourth at 205 and Fauquier sixth at 185. So the Cougars earned the last region berth in Class 4.

“They have put in the work, so it’s so exciting to see them rewarded for it,” said Kettle Run coach Joann Shipe, whose roster doesn’t have any seniors after losing eight to graduation following last season. “This was definitely their best performance of the [2017] season, so it’s exciting to see them show what they can do.”

The Cougars won the 4A state championship in 2015, but they have since taken a backseat to Liberty.

In the second round Wednesday, the Eagles posted a score nearly nine points better than their first round tally, in part thanks to zero deductions after judges took three points from their initial performance of the night.

“First Round, I don’t think was our best performance, but they really came out strong Second Round,” Waddle said. “We’ve been practicing for weeks to be a second-round team. We’ve always kind of struggled in that area.”

The Eagles likely also felt at ease knowing they had already earned a region berth by winning the district’s Class 4 regular season championship. So they excelled Wednesday in the cheer and crowd-leading criteria, which have been a large part of their focus over the past few seasons.

“That’s kind of our thing,” Waddle said. “We get a lot of [judge] comments about their energy and their excitement.

“Emma really had to step up for us when we had an injury early in the year,” Waddle said. “She’s done an impeccable job. I’m super impressed for her never having cheer experience.”

For Kettle Run, meanwhile, Shipe similarly credited her Cougars for scoring points in the cheer and crowd-leading criteria.

“They brought their energy, finally,” Shipe said. “It’s a pretty athletic team, but it’s not a very [emotionally expressive] team, and they’ve really had to work on that all season.

“That’s something hard to do if it doesn’t come natural,” the coach said. “So I really think something clicked and they really brought it and just upped their energy.”

The Cougars finished the first round with only a one-point deduction compared to three other teams that lost at least three points each to deductions, including Liberty.

“She’s definitely our strongest flyer on the mat,” Shipe said. “Hitting the most elite skills.”

“She brings a lot of personality and energy, naturally,” Shipe said of Harrison. “With great tumbling skills and strength as a back spot.”

Kettle Run finished with one deduction point in the first round. Brentsville, meanwhile, had five deduction points between its first- and second-round performances, but the Tigers still had plenty of leeway in the judges’ scoring thanks to the difficulty of their performances.

“We have a very tough routine,” Witt said. “A lot of teams are making their routines easier to make it much more sharp and clean.

“We have kept our difficultly level up,” she said. “Our stunting and tumbling, we push ourselves to do tough stuff. We want to show the skills we’ve been working on.”

Yet Witt refused to specially praise her best athletes and leaders in a lineup that lacks seniors.

Nonetheless, Witt hopes the Tigers can win the Class 3 Region B championship in their home gym. They will face the same six Class 3 Northwestern District teams, in addition to Spotsylvania, with the top two teams advancing to state.

“Hopefully, if we keep bringing it like this [district meet] we will come home with that [bid to] state again,” said Witt, whose team qualified in 3A last fall.

The Eagles, of course, also hope to earn a state bid in Class 4 during the Region C meet Oct. 24 at Riverside High.

“They’re our family from the other side of the county, so we’re excited to do this with them,” the coach said. “These girls have fun.”

Tigers and Bobcats each entered as a region champion

“Being able to share this with them was amazing”