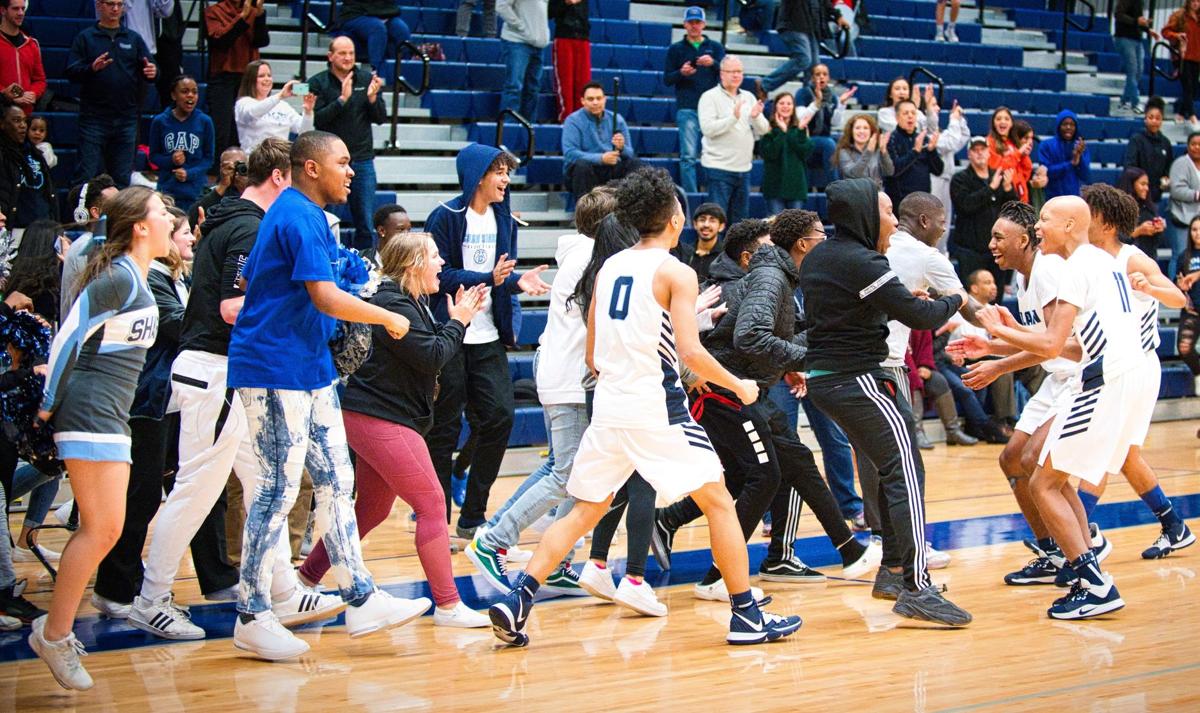 Micah Ferguson (11) and Tazir Smith (behind) celebrate with Colgan fans Friday during the Sharks' 62-59 win over Potomac at home in Manassas. 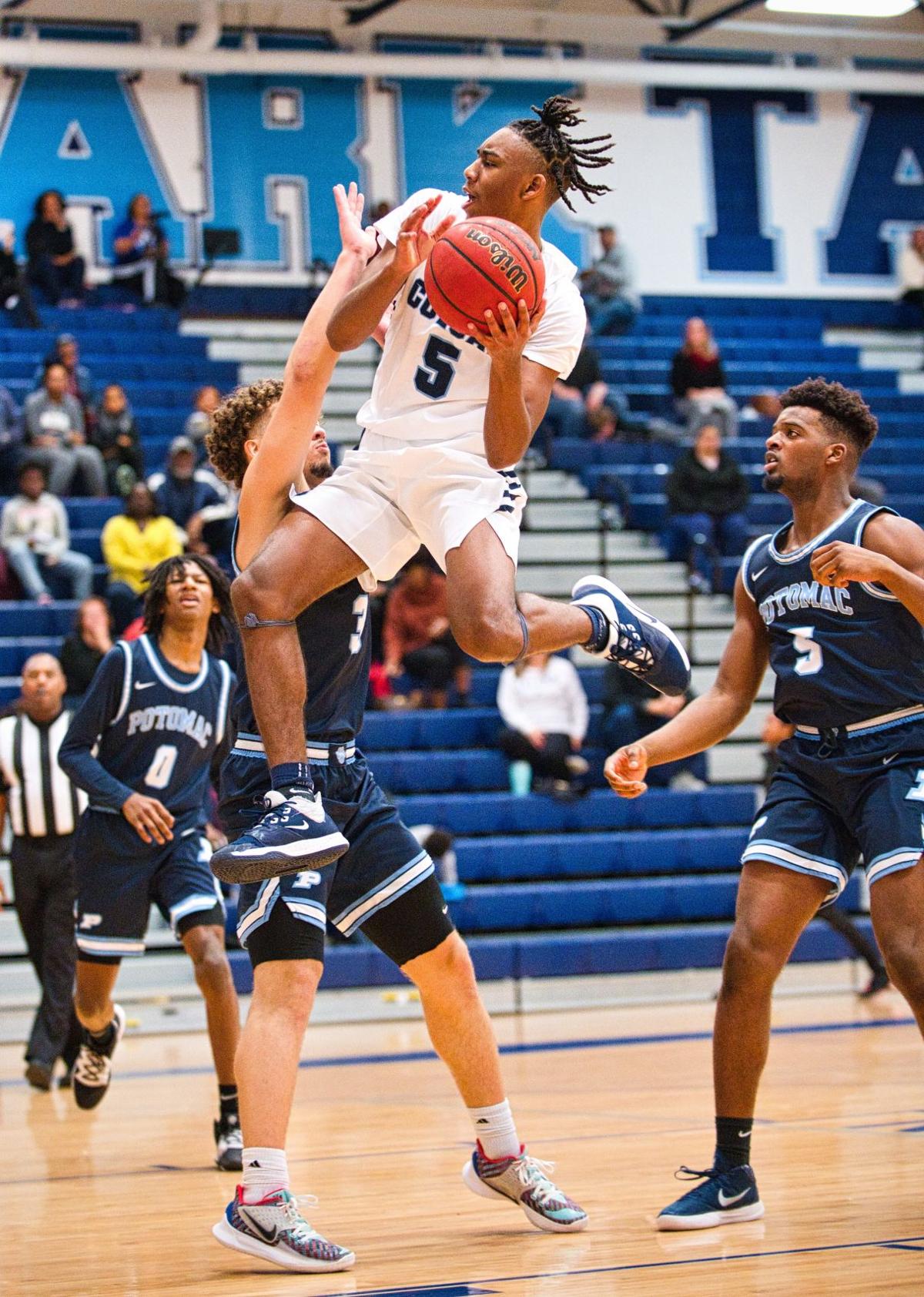 Tazir Smith elevates toward the basket Friday during Colgan's 62-59 win over Potomac at home in Manassas. 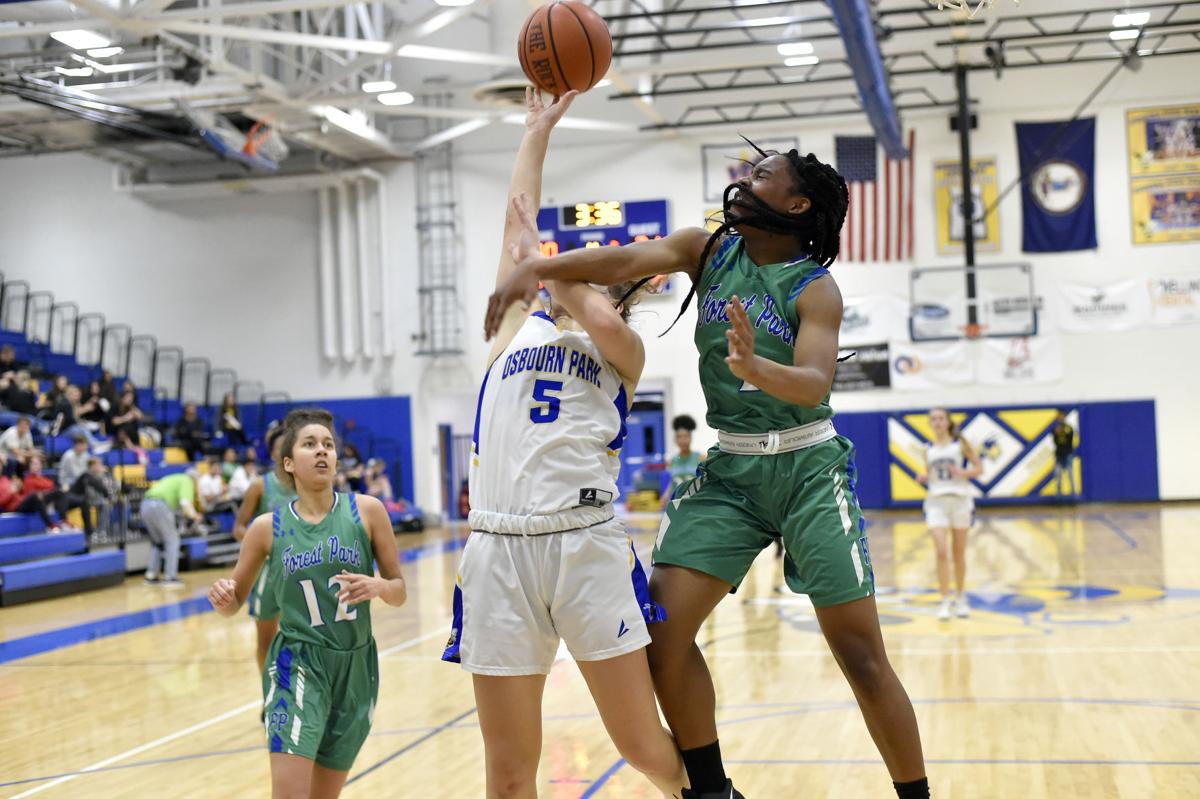 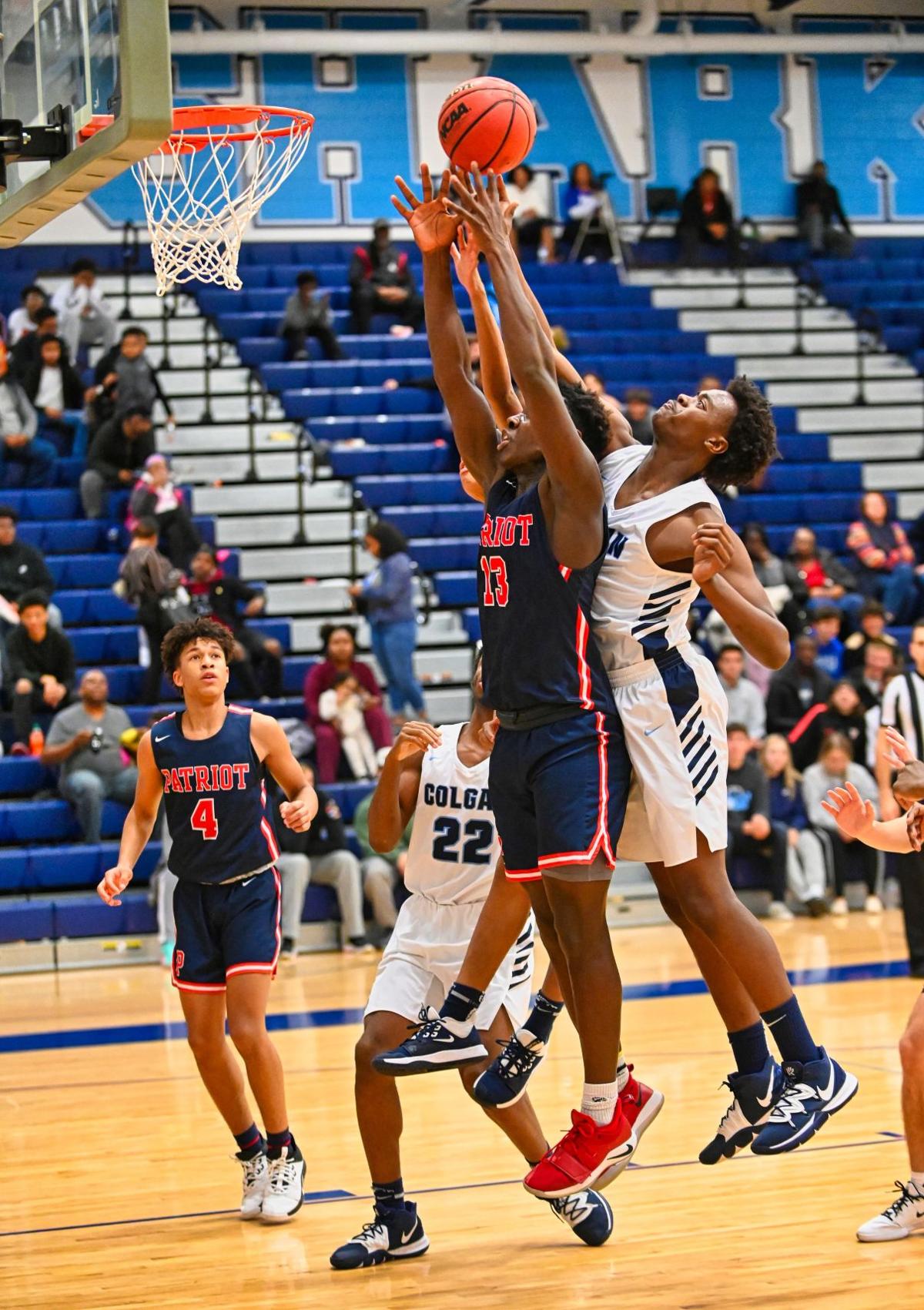 Tazir Smith made 11 of 12 free throws in the fourth quarter Friday to ensure his Colgan Sharks would beat Potomac’s boys basketball team for the first time in history, winning 62-59 at home in Manassas.

The Panthers cut a 13-point deficit to only three in the fourth quarter, but Smith scored most of Colgan’s 18 points in the period to secure the victory and end a four-game losing streak against Potomac. So the Sharks improved their record to 7-6 overall and 2-2 in the Cardinal District while dropping Potomac to 9-3 and 3-1.

The Sharks took a 15-8 lead in the first quarter, a 32-19 advantage at halftime and a 44-31 lead at the end of the third period. Then Anthony Jackson cut Potomac’s deficit to 57-56 with a 3-pointer late in the fourth, but Colgan responded with a field goal and 3-for-4 free-throw shooting to hold off the Panthers.

Smith finished with a game-high 28 points, including 15-for-16 free-throw shooting while Noah Wheatley had 19 points with 4-for-4 free-throw shooting. They helped Colgan make 22 of 26 free throws as a team while Adric Howe added seven points and D.J. Chandler had six.

For Potomac, Jackson finished with 17 points on 5-for-14 3-point shooting while Tyrell Harris had nine points with eight apiece from Kejahn Rainey and Kyle Honore. Harris also led the Panthers with 10 rebounds and six assists while Rainey had four assists and Honore had three.

The Osbourn Park Yellow Jackets maintained a share of the lead in the Cedar Run District standings Friday by beating John Champe’s girls basketball team 45-25 on the road in Aldie.

Jo Raflo led them with 13 points as they improved to 2-0 in the district and broke an overall two-game losing streak for an 8-5 record.

Angel Jones made 5 of 6 field goals and 3 of 3 free throws to help the Forest Park Bruins beat Freedom's girls basketball team 57-30 at home.

So she finished with 13 points, five steals and four assists as Forest Park improved its record to 3-1 in the Cardinal District with a 6-5 mark overall, including a three-game winning streak, while the Eagles fell to 1-2 and 2-9.

Belinda Glenn added 16 points, Kayla Burton had 13 and Michelle Chambers had 10 as the Bruins built a 22-4 lead in the first quarter, a 33-14 advantage at halftime and a 54-26 lead entering the fourth period. Like Jones, Burton had an efficient game, going 6-for-8 from the field.

Chambers also had seven rebounds and Burton had six while Janiah Jones had five assists, Jones had four and Glenn had three. Plus, Jones had three steals with two apiece by Glenn, Lauren Palmateer and Jones.

The Forest Park Bruins held each of Freedoms’ boys basketball players under 10 points Friday en route to a 66-50 victory over the Eagles on the road.

The Bruins, meanwhile, had three double-digit scorers as they improved their record to 7-5 overall and 2-2 in the Cardinal District while dropping Freedom to 3-7 and 1-2. Kenneth Clark led them with 20 points, Kyle Bond had 11 and Tyler Smith had 10. Evan Reed added nine points and Kenyani Lee had seven.

They helped Forest Park build a 16-10 lead in the first quarter, a 35-20 advantage at halftime and a 48-39 lead entering the fourth period. Bond finished with three blocks while Smith had seven rebounds and two blocks.

For the Eagles, Devontae Boyd and Markel Williams had nine points each while Jordan Perkins had eight with six apiece from Nasir Kelly and Ryan Tallent. Williams also had 12 rebounds while Eric Downing and Justice Dixon had two assists each.

The Patriot Pioneers limited Stonewall Jackson to only five points in the second quarter Friday to earn their first Cedar Run District victory of the boys basketball season by beating the Raiders 68-48 at home in Nokesville.

Jackson Ford led Patriot with 15 points while Chad Watson had 11, Allen Davis had eight, Ellis Nayeri had seven and Darrel Johnson had six. Ford made 7 of 10 field goals and Watson made 3 of 5 3-pointers.

Olszewski led them with 35 points as they improved their DAC record to 4-0 with a 9-5 mark overall, including a three-game winning streak. He made 10 of 11 field goals (90 percent) and 15 of 17 free throws (88 percent) en route to a double-double with 13 rebounds and three assists.

John Paul Vander Woude added 14 points on 5-for-7 shooting, helping Seton make 56 percent of its field goals in the game (29-for-52). He also made 2 of 3 free throws to help the Conquistadors finish 22-for-25 (88 percent), while Jack Vander Woude finished with 13 points, Bobby Vander Woude had 12 and Andrew Nguyen had 11.

The Heritage Christian Patriots maintained their share of the lead in the Old Dominion Association of Church Schools Conference boys basketball standings Friday by beating Fairfax Baptist 64-44 on the road.

The victory gave Heritage a 2-4 record with a 2-0 mark in the conference, matching Evangel Christian atop the standings, while Fairfax fell to 1-3 and 2-4 overall.

Junior point guard Hayden James led the Patriots with 20 points, bumping his season average to 18.3 points per game. He also had seven assists and four steals Friday, giving him 3.8 and 5.0 per game.

Hannah Williams scored 23 points Friday to keep the Stonewall Jackson Raiders in a tie for first place in the Cedar Run District girls basketball standings by beating Patriot 54-39 on the road in Manassas.

She also finished with nine steals and seven rebounds to boost Stonewall’s record to 2-0 in the district and 8-4 overall while dropping the Pioneers to 7-6 and 1-1. Maryan Yusuf added 10 points and Nataezja Gaskins had seven as nine Raiders scored.