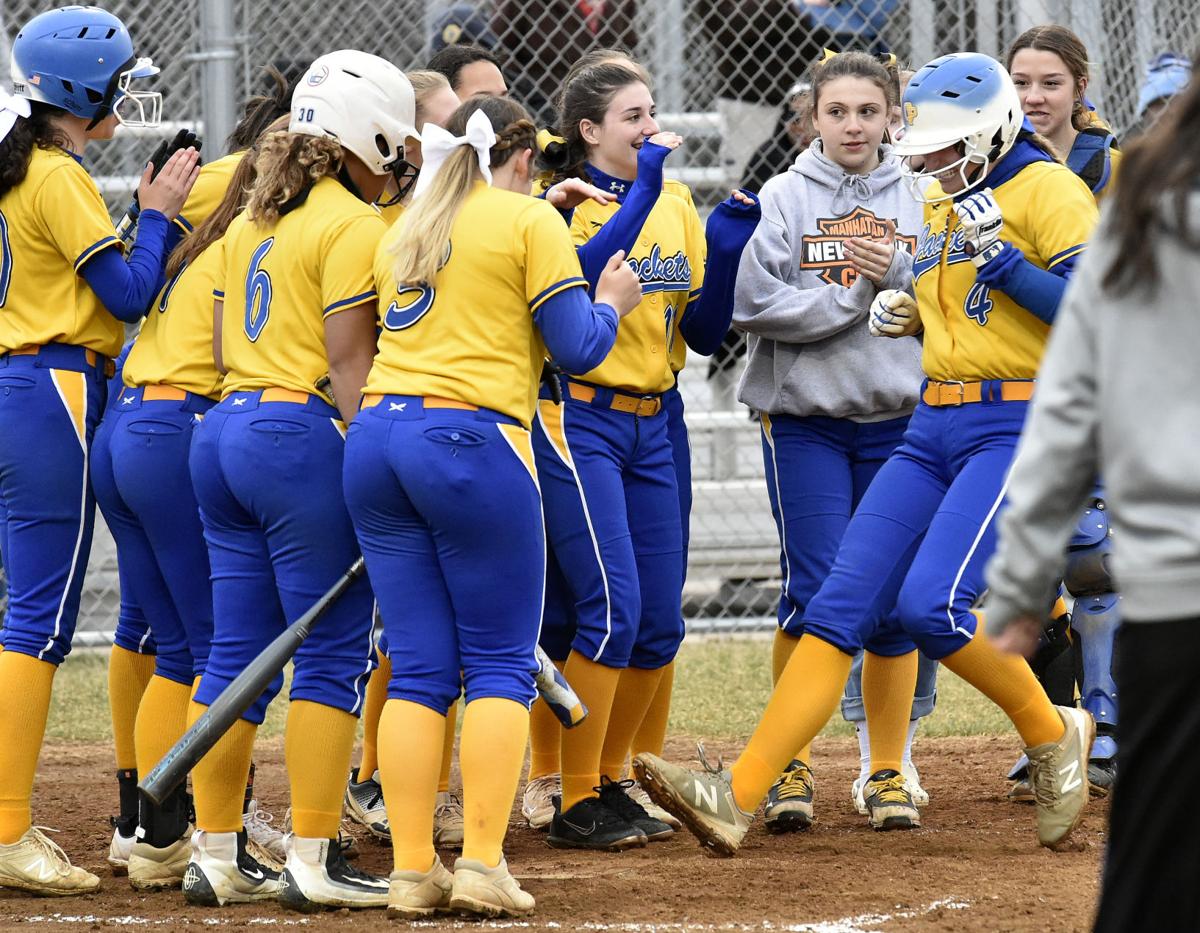 Lilly Burns reaches the plate to celebrate a home run with her teammates Tuesday during Osbourn Park's 18-2 win over Osbourn on the road in Manassas. 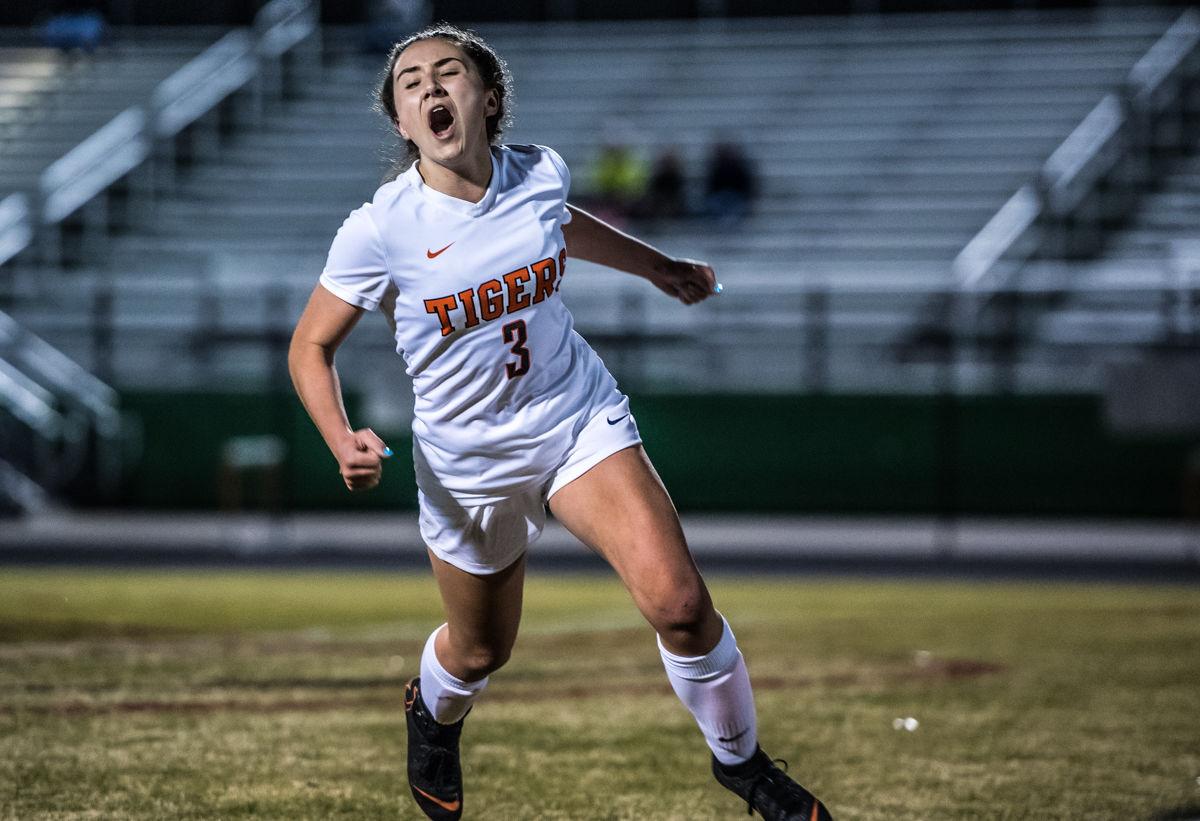 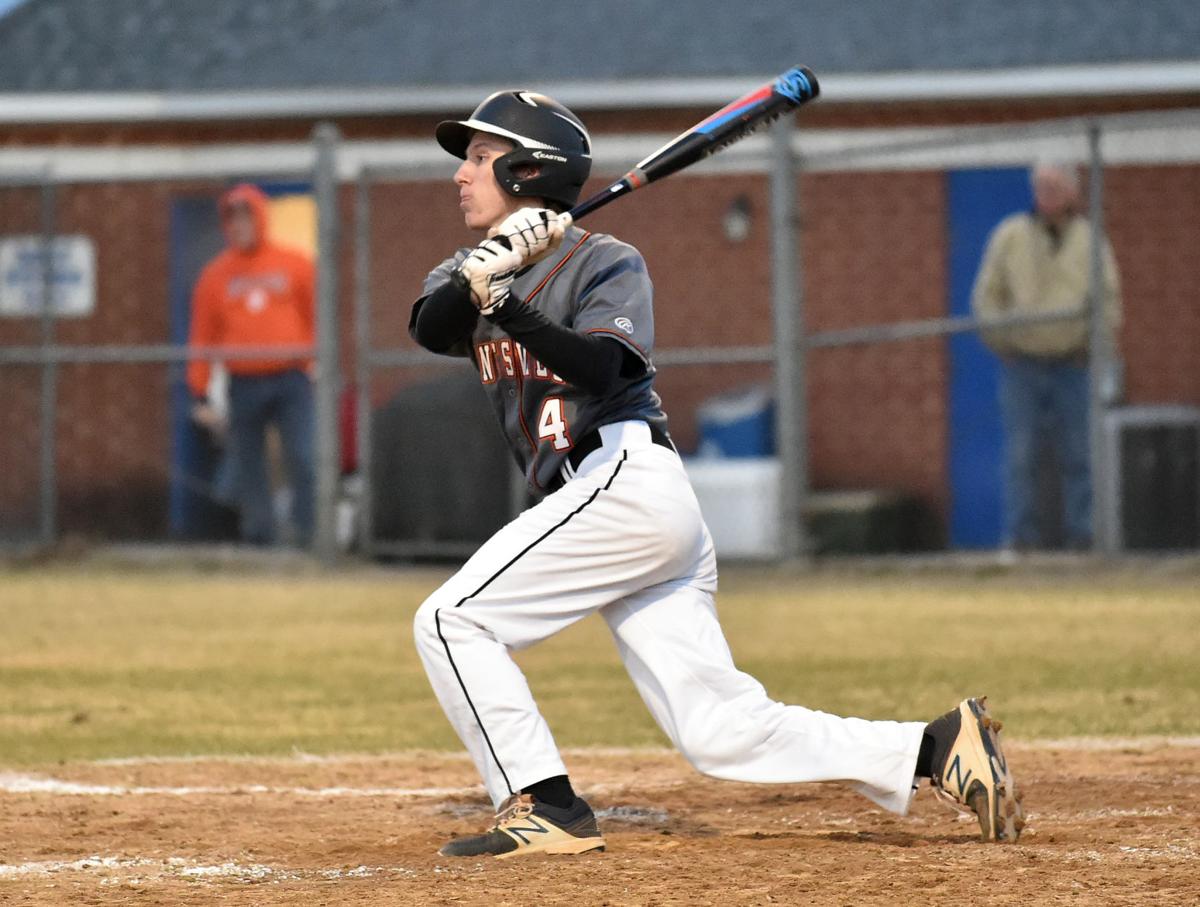 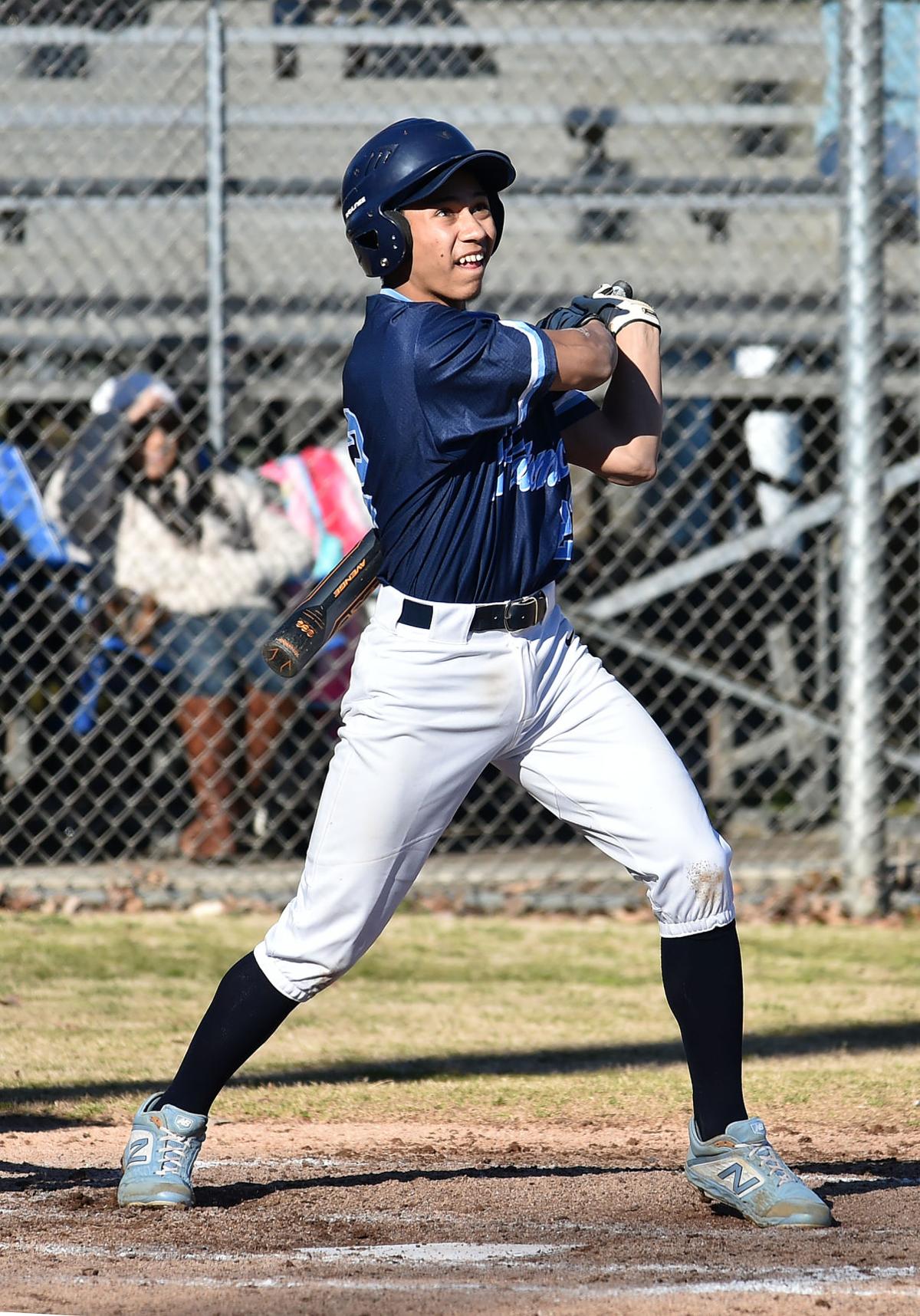 Kalei Grebin had two runs, two walks and a triple on 1-for-1 hitting during Potomac's 13-3 win over Colgan.

Lilly Burns reaches the plate to celebrate a home run with her teammates Tuesday during Osbourn Park's 18-2 win over Osbourn on the road in Manassas.

Kalei Grebin had two runs, two walks and a triple on 1-for-1 hitting during Potomac's 13-3 win over Colgan.

Allison Zentz pitched a two-hitter and amassed four RBIs offensively to give the Osbourn Park Yellow Jackets an 18-2 victory on the road over Osbourn’s softball team in five innings via 10-run mercy rule.

As a No. 9 hitter, she went 2-for-4 with a double and run to keep OP undefeated at 9-0 with a 2-0 mark in the Cedar Run District while dropping the Eagles to 4-3, 0-1. Zentz also pitched five innings with four strikeouts, allowing only one earned run on two hits and one walk.

Jessika Seader scored a run with three walks and 0-for-1 hitting, helping OP amass seven runs in the top of the first inning and 10 in the second.

For the Eagles, Alyana Tennant hit a solo home run and finished 1-for-2.

The Colgan Sharks hit five home runs Tuesday en route to a 24-4 victory over Freedom’s softball team on the road in Dumfries with the game ending in three innings.

They finished with 12 extra-base hits and improved their record to 6-2 overall and 3-1 in the Cardinal District.

Ava Johns, meanwhile, was the winning pitcher who struck out three while allowing two runs on two hits and zero walks in the first inning.

For Potomac, Wynema Thomas went 2-for-2 with a steal and RBI, while Taylor King had one run on 2-for-3 hitting.

Madison Fitzpatrick scored a pair of goals Tuesday to keep the Brentsville Tigers undefeated with a 5-0 victory over Culpeper’s girls soccer team on the road.

So their record improved to 3-0-1 with three consecutive shutouts behind the play of goalkeeper Emily Cipolla.

Catharine Forst scored the winning goal with an assist from Cheyney Hite early in the first half, giving her five goals this season, which matches Fitzpatrick for the team lead. Adding one goal each Tuesday were Taylor McGovern and Madeline Bohan, while Maria Mendo and Abby Lewis had one assist apiece.

Their streak of no-hit pitching ended Tuesday at 92 consecutive batters, but the Potomac Panthers still remained undefeated with a 13-3 win over Colgan’s baseball team in five innings via 10-run mercy rule at home in Dumfries.

They entered the evening with four consecutive no-hitters, but the Sharks’ Brandon Cassedy broke that steak in the top of the third inning with a single. So Potomac finished with 22 2/3 consecutive innings without allowing a hit over six games, amassing 46 strikeouts.

Regardless, the Panthers beat Colgan to boost their record to 7-0 overall and 5-0 in the Cardinal District while dropping the Sharks to 3-4 and 2-2. Brody Mack earned the win by pitching five innings with four strikeouts, allowing three runs on three hits and two walks. So he now has a 5-0 record with a hand in three no-hitters and a 1.56 ERA with a 0.52 WHIP and 31 strikeouts over only 23 innings.

Offensively, Potomac used a 10-run third inning to overcome an early 3-1 deficit. Matt Drumgold led the way with three RBIs, a run and double on 2-for-3 hitting, while Josue Cumba had three runs, three steals, two RBIs, a double and walk on 1-for-3 hitting.

For Colgan, Brady Carter had two RBIs and a double on 1-for-2 hitting, while Brandon Cassedy went 1-for-2 with a run and steal.

The Brentsville Tigers continued their undefeated start to the baseball season by beating Culpeper 7-1 Tuesday at home in Nokesville.

Vince DiMauro pitched a complete game three-hitter with 11 strikeouts to give the Tigers a 5-0 record overall with a 2-0 mark in the Class 3 Northwestern District. He allowed only one run and two walks over seven innings for a 3-0 recordindividually. So DiMauro has 38 strikeouts in only 20 innings, helping give him a 1.35 ERA and 0.60 WHIP.

Offensively, Billy Hoad went 3-for-4 with two runs, a triple, double, RBI and steal, while Braedaen Deslippe went 2-for-4 with two runs, two RBIs and a double. Alex Seymour added two RBIs on 2-for-4 hitting, while Sam Beard had two walks on 0-for-1 hitting. They helped the Tigers score three runs in the third inning and four in the fourth for a 7-0 lead.

They Hylton Bulldogs used a four-run first inning to remain undefeated in Cardinal District play with a 4-2 victory at home over Woodbridge’s baseball team.

Three Hylton pitchers combined to throw a two-hitter with starter Riley Arndt carrying most of the weight to boost the Bulldogs’ record to 4-0 in the district and 5-2 overall while dropping the Vikings to 1-3 and 1-4. He allowed two runs on six walks and two hits while striking out six over 6 2/3 innings. Then Ethan Marotske claimed the save by enticing a double play on a ground ball against the only batter he faced in the bottom of the seventh.

Woodbridge took a 1-0 lead in the top of the first inning, but the Bulldogs loaded the bases to begin the bottom of the inning, setting up their rally. Scoring Hylton’s runs were Byron Coleman (1-for-3, steal), Diego Barrett (0-for-2), Marotske (0-for-2) and Angeles Pierpont (1-for-3, RBI).

The Hylton Bulldogs used a four-run third inning Tuesday to give Woodbridge its first Cardinal District loss of the softball season by beating the Vikings 8-3 at home.

Kendall Gobin hit an RBI single in the third inning en route to finishing with three RBIs and a run on 3-for-4 hitting to give the Bulldogs a 3-1 district record with a 7-1 mark overall while dropping Woodbridge to 3-1 and 4-4.

For the Vikings, Sarah Medellin hit a two-run home run in the seven inning to finish 1-for-3, while Kasey Pope went 2-for-3 with a double and RBI. Gabrielle Grubbs added two steals, a run and walk on 0-for-1 hitting.

The Yellow Jackets did it differently on the baseball field, though, scoring nine runs in the top of the seven inning to boost their record to 6-1 overall and 2-0 in the Cedar Run District while dropping Osbourn to 3-3 and 1-0.

Jed Barrett had three runs, three steals and two walks on 1-for-2 hitting, while Mario Duarte went 1-for-3 with three RBIs two steals and a double, and Ben Riddick went 2-for-3 with a steal.

On the mound, Cameron Mozingo-Morales was the winning pitcher thanks to eight strikeouts and only two runs on five hits and zero walks over five innings. Against him, John Zimmerman hit a two-run double, finishing 1-for-3.

Riley Eikhoff’s four RBIs led the Patriot Pioneers to an 11-4 victory Tuesday over Stonewall Jackson’s baseball team on the road in Nokesville.

The Pioneers took an early 4-0 lead before Stonewall had a three-run third inning. Patriot responded with three runs in the fourth inning, one in the fifth and three in the sixth. So Serrano earned the victory as the Pioneers’ starting pitcher, allowing three unearned runs on three hits and two walks while striking out three over four innings.