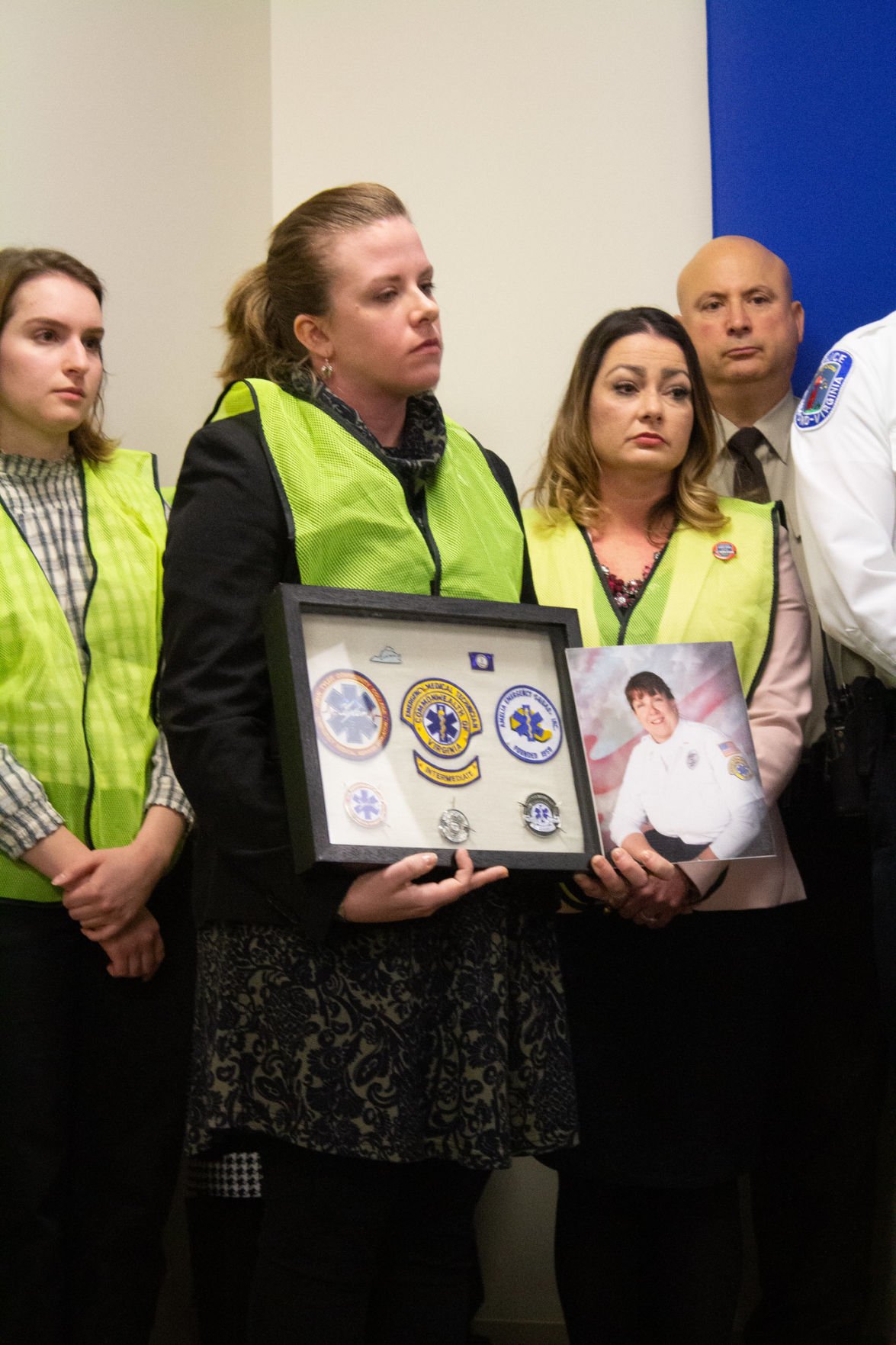 Meredith Spies holds a photo of her mother, Karen Giles, who was killed last year in a motor vehicle accident. 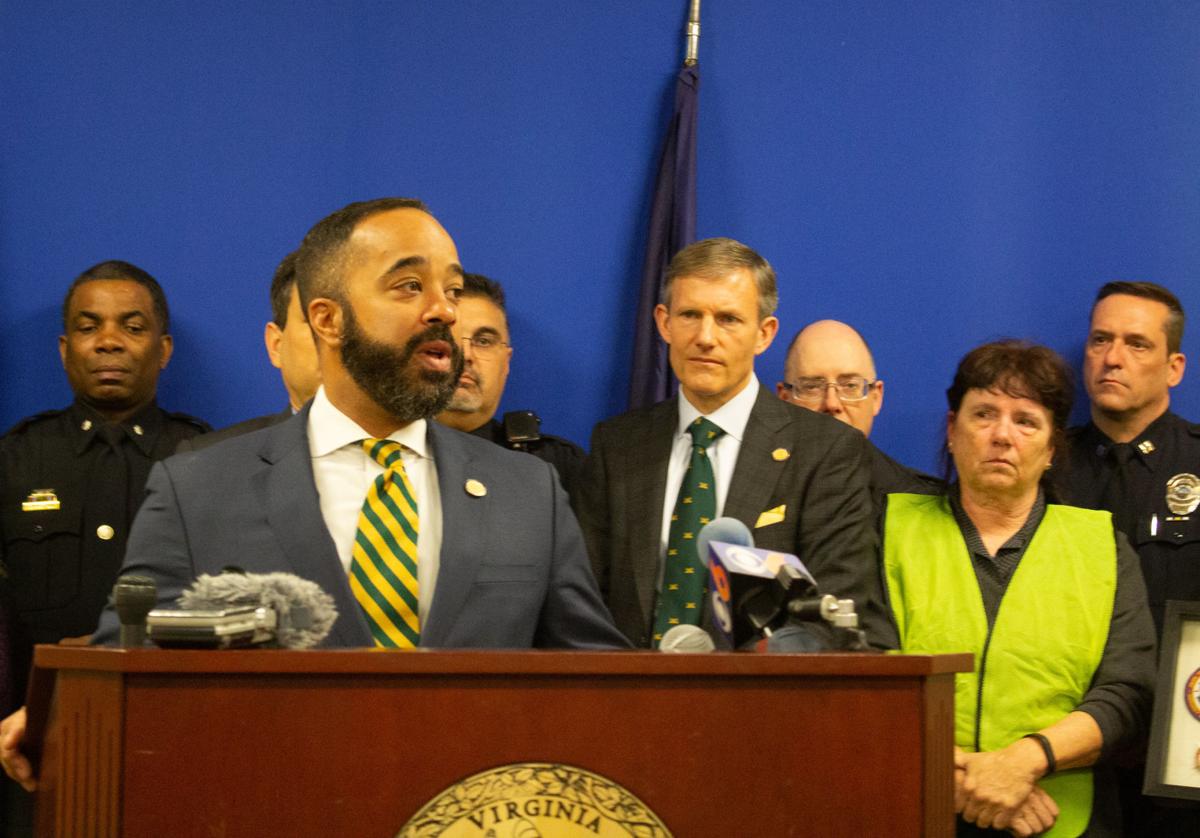 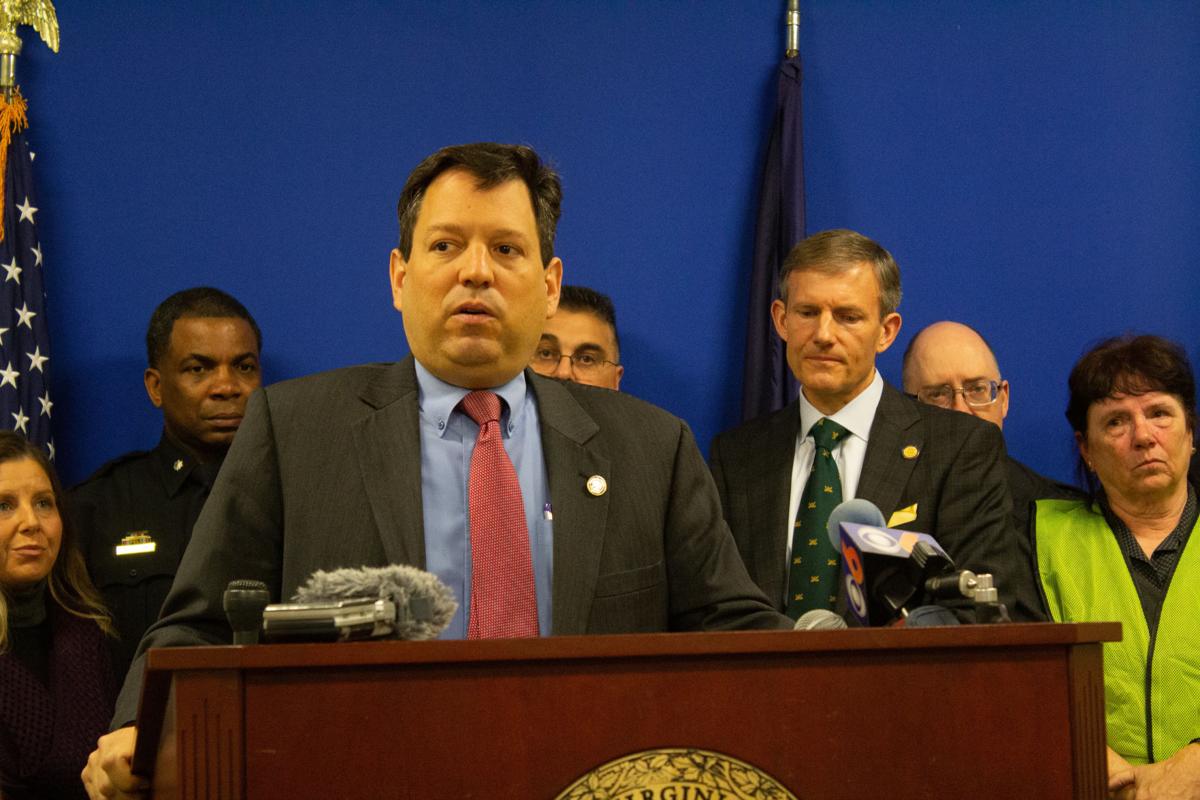 Karen Giles was proud of her 30 years as a volunteer firefighter and emergency medical technician, her daughter said, until she was killed last February when a dump truck driver looked down at his phone to text a friend about a Valentine’s Day gift.

Giles’ daughter, Meredith Spies, said she now forgives that driver. But in a press conference Tuesday, she also said the current sentencing guidelines are not harsh enough.

Spies spoke in support of House Bill 874, currently being considered in the Virginia General Assembly. The bill would prohibit holding a handheld personal communications device while driving a motor vehicle.

Current law prohibits reading or typing messages on a personal communications device while driving. However, holding such a device is legal, except while driving in a work zone.

The sponsor for House Bill 874, Del. Jeff Bourne, D-Richmond, called the resolve of Spies and others who are pushing for legislation to prevent distracted driving “truly inspiring.”

“Too many people are being affected, being killed, being harmed,” Bourne said. “Families are being tormented by distracted driving and those accidents that result from that.”

Last fall, Richmond City Council unanimously passed an ordinance to ban using mobile devices while driving. A bill that would have curbed distracted driving passed the Senate but failed in the House during the 2019 General Assembly session. If HB 874 can make it out of the House and Senate this session, then a signature from Gov. Ralph Northam would make the same policy statewide law.

“We want to make sure that everyone is safe and that distracted driving goes down rather than up,” Bourne said.

Richmond Police Chief Will Smith said during the press conference that his department supports HB 874 and that anyone with children shouldn’t be surprised by the proposal.

“One of the very first things that we all talk about with our kids is, ‘make sure that you leave your phone out of your hand and don’t text, don’t call until you get to your destination,’” Smith said. “Yet we, as an adult society, tend not to obey our own advice.”

Smith said there were more than 1,000 accidents involving distracted driving in the city last year, up from 950 in 2018. He said the ordinance passed by the Richmond City Council last year mimics HB 874.

“We see this as a very positive opportunity to improve the safety of our traveling public, those who are pedestrians on our sidewalks and our cyclists in the streets,” Smith said.

Sen. Scott Surovell, D-36th, who represents parts of Fairfax, Prince William and Stafford counties, said during the press conference that using phones while driving has become an epidemic.

It’s currently legal to drive and use a phone to play “Angry Birds, or while browsing the internet,” he noted.

Surovell said he believes HB 874, now in the hands of the House motor vehicles subcommittee, has a strong chance of becoming law. He thanked Bourne for his support of similar legislation over the past four years.

“While I certainly can’t tell the future,” Bourne said, “I’m very, very confident that at some point in 2020, we’ll all be together again, watching the governor sign this bill into law.”