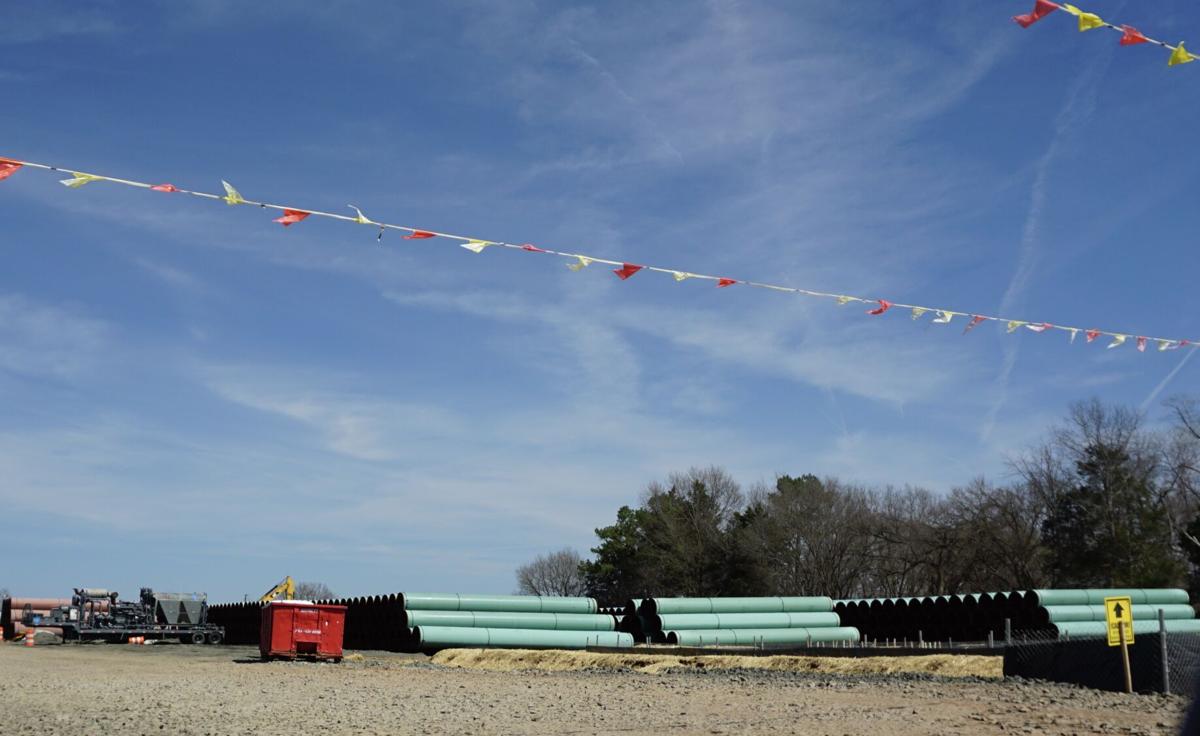 A construction staging area in Catlett, Virginia utilized during the construction of the Transco pipeline expansion in Fauquier and Prince William counties earlier this year. The expansion was completed in November 2020. 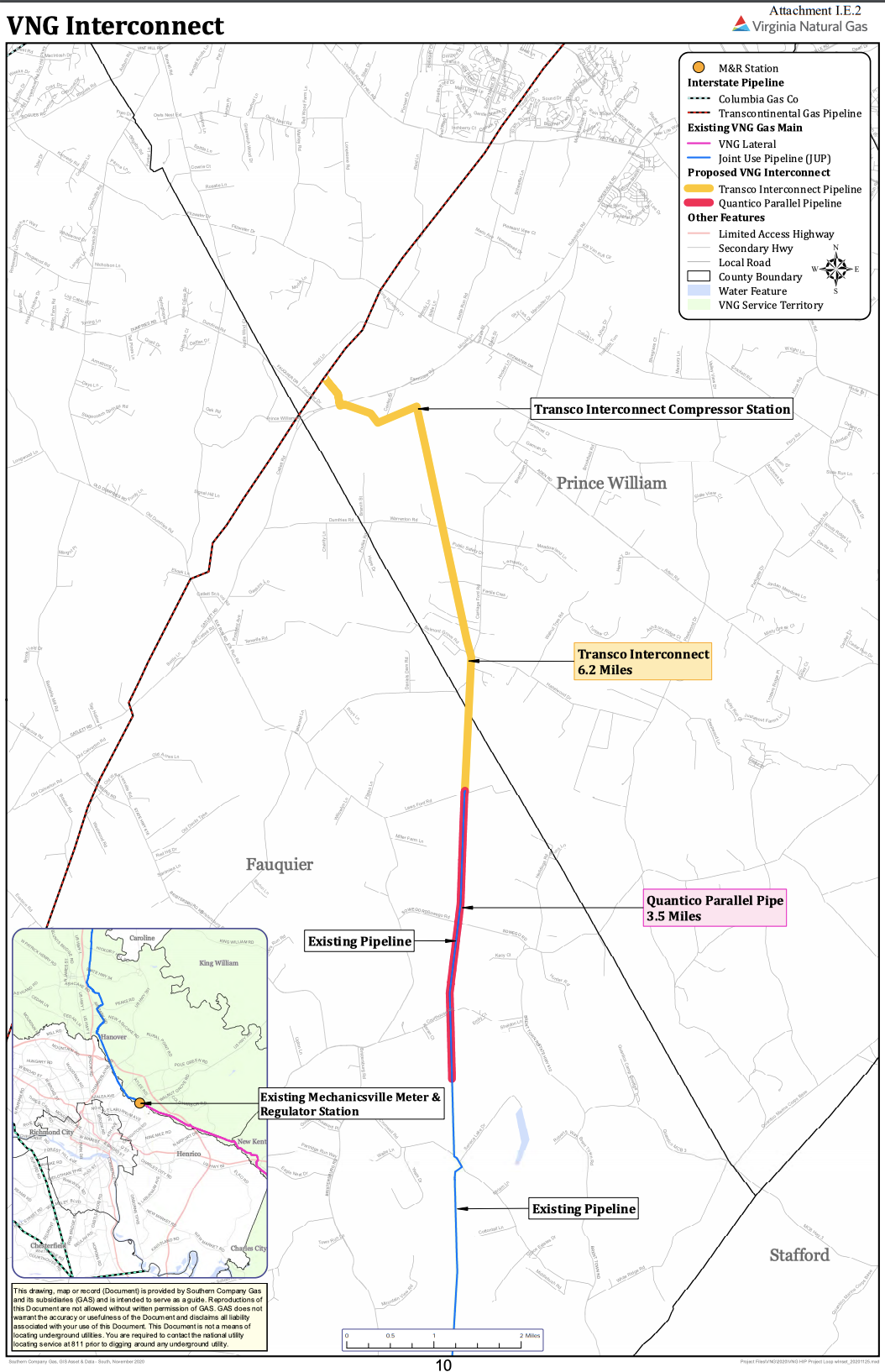 The Virginia Natural Gas Interconnect would add nearly 10 miles of new pipeline in Prince William and Fauquier counties as well as a natural gas compressor station off Va. 28 near Nokesville.

Virginia Natural Gas is back with plans for a $205 million natural gas expansion project that would add about six miles of new natural gas pipeline and a compressor station in Prince William County’s “rural crescent,” four miles of pipeline in Fauquier County and upgrades to a metering station in Hanover County.

The application for the project comes only weeks after a much larger Virginia Natural Gas expansion project, known as the "Header Improvement Project," was dismissed by the State Corporation Commission when plans for a new power plant in Charles City County, which the pipeline project would have serviced, failed to materialize.

The new pipeline project, called the "Virginia Natural Gas Interconnect," is a scaled back version of the original proposal and cites increased demand from Columbia Gas of Virginia and Dominion Energy subsidiary Virginia Power Services Energy as the primary reason for the expansion.

The new pipeline would start at an interconnect station along the existing Transco pipeline near the Prince William-Fauquier county line and traverse six miles through Prince William County and four miles through Fauquier County along a utility corridor before connecting with an existing pipeline in the Quantico area.

The compressor station, an industrial facility that aids in the transportation of natural gas from one location to another, would be built on 36 acres of land just off Va. 28 in the Nokesville area, near Center Street and Farmview Road. The new infrastructure would add about 245,000 dekatherms per day of capacity.

The expansion is expected to raise rates for the nearly 300,000 customers in the Virginia Natural Gas service area, which includes the coastal plain and tidewater regions of Virginia.

Under the proposal, Columbia Gas of Virginia and Virginia Power Services Energy will pay for 86% of the project’s $205 million price tag with the remaining 14% of the capital cost covered by Virginia Natural Gas customers. Virginia Natural Gas expects the net cost of the new facilities to cost $285 million over their lifespan, with the company’s customers on the hook for $40.5 million of that total.

It is also expected to generate $158 million in economic activity and support over 1,400 jobs in Virginia, according to company press release.

The project comes even as Virginia has begun to shift away from fossil fuels like natural gas in favor of renewable energy. The Virginia Clean Economy Act, passed by the Virginia General Assembly in 2020 with the support of Gov. Ralph Northam, requires Virginia’s electric grid to be powered by only nuclear and renewable energy by 2050.

Already, Virginia Natural Gas’ latest proposal has received pushback from some environmental groups, including the nonprofit Food and Water Watch.

Jolene Mafnas, an organizer with the group’s Virginia chapter, said in a press release that the project would hinder communities from achieving a transition to “safer, cleaner energy sources, like solar, which can bring in an equal amount of sustainable high-paying jobs for the local community.”

“It’s time Virginia stops allowing companies like [Virginia Natural Gas] to waste ratepayer money on projects that will harm communities’ right to clean air, water and a livable climate, while preventing them from fully reaping all the benefits of a clean, renewable energy economy,” Mafnas said.

Environmental organizations far and wide have decried the continued dependence on fossil fuels for energy, including natural gas, because the burning of fossil fuels creates harmful greenhouse gas emissions that trap heat and make the planet warmer.

The largest source of greenhouse gas emissions from human activities in the United States comes from burning fossil fuels for electricity, heat and transportation.

The project application was just recently filed and will need to be approved by the SCC, the members of which are elected by the Virginia General Assembly for six-year terms. It's not clear when the three-member commission will take up the application.