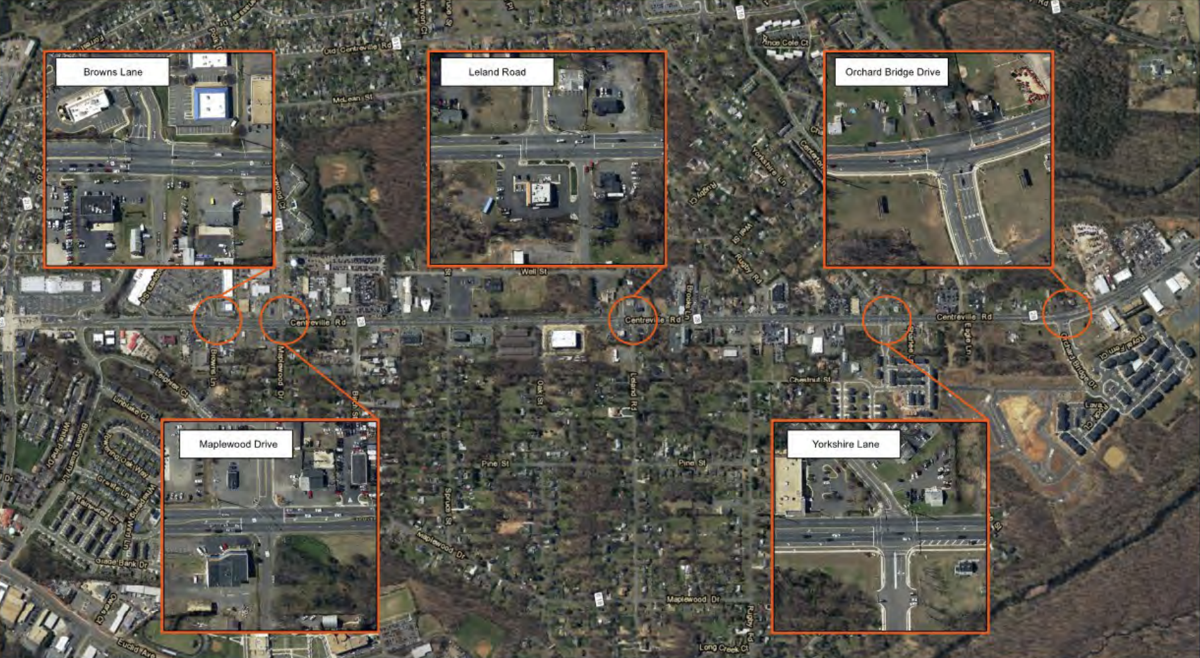 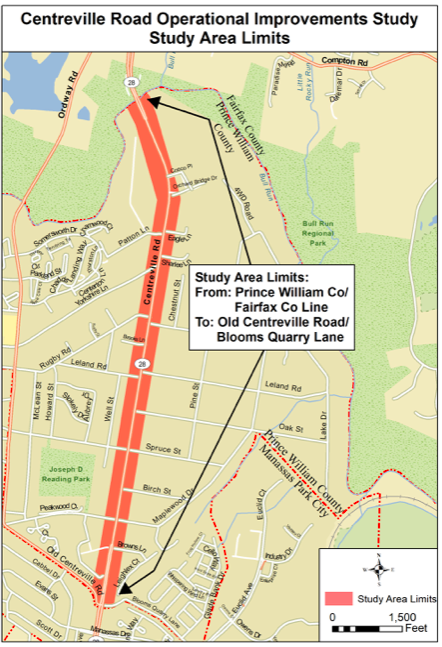 The study focused on a 2-mile stretch of Va. 28 through Manassas Park.

A closer look at the intersection improvements VDOT recommended for Va. 28 in Manassas Park. 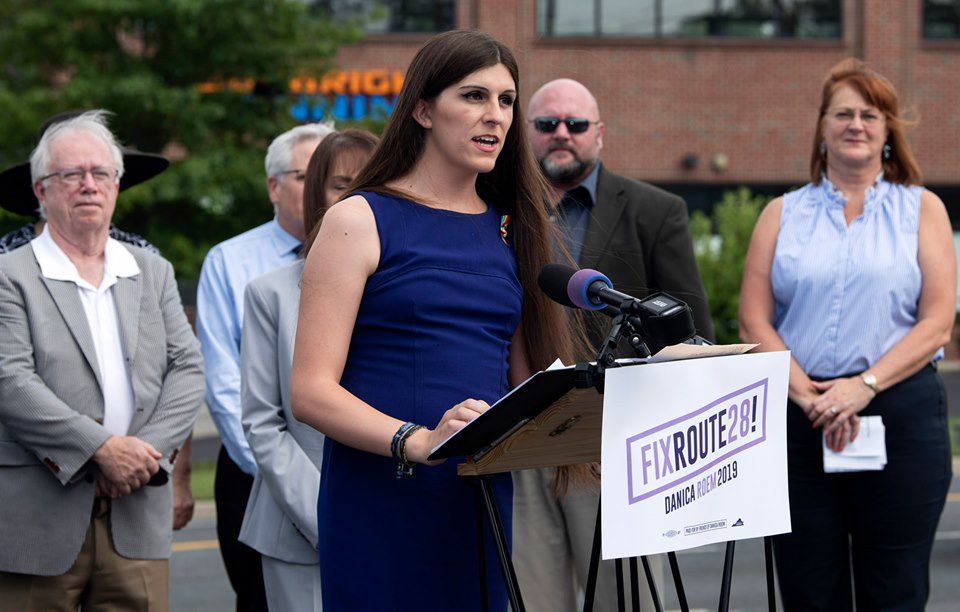 The Virginia Department of Transportation is recommending $38 million in intersection and pedestrian improvements along a 2-mile stretch of Va. 28 between Fairfax County and the City of Manassas Park that they say will make trips safer and quicker.

The Va. 28 corridor in the Manassas Park area has been plagued by heavy traffic and vehicle crashes for years as the number of new residents in the area has grown.

A VDOT study of the area, completed this week, outlined several options for improving safety and travel times along the corridor. VDOT recommended creating a series of “R-cut” intersections at key interchanges that will restrict left turns, as well as a continuous median and multi-use pedestrian path that will connect to Fairfax County. The estimated cost of the project is $38 million.

The options were presented to the public at two  information meetings last fall that were attended by a total of about 160 area residents. Additionally, two online surveys were conducted that drew more than 1,300 participants.

The proposed R-cut intersections and improved pedestrian path design ranked high in surveys taken during the public meetings and via online, which was among the reasons VDOT recommended them, the study said.

The study was spearheaded by Del. Danica Roem, D-13th, who has made improving Va. 28 a focus of her political campaigns. Roem was appointed to the Northern Virginia Transportation Authority (NVTA) earlier this month.

“When I first ran for office in 2017, no major changes had been made to Route 28 in the 13th District since the mid-1980s despite Prince William County's population growing by more than 300,000 people since then,” Roem said in a press release.

Roem said the lack of improvements made along the corridor “has resulted in chronic backups and unsafe driving conditions for residents, commuters and first responders.”

The R-cut intersection design, she said, “will reduce the severity of accidents and the total number of accidents,” along the corridor, improving traffic safety as well as commute times.

Roem said in a phone call Wednesday that the improvements recommended by the study could cut down commutes by as much as 10 minutes. Roem said the City of Manassas Park is applying for state “Smart Scale” funding for the project but added that there are no guarantees that the project would receive funding. The Commonwealth Transportation Board will decide on the funding request next year. Any construction on major projects is at least a few years away.

As part of the study, VDOT gathered extensive data to assess congestion, traffic operations and safety concerns and found that annual crash rates along the corridor are 50% to 88% higher than the statewide average and that the 2-mile stretch has “extremely high” travel times and congestion levels.

The study aims to improve five major intersections in the area:

The study said the pedestrian improvements will allow for safe crossing of Va. 28 between residential and commercial areas “to encourage pedestrian trips between those areas.”

The study also identified several low-cost, short term corridor improvements, including flashing yellow arrows for left turns and other traffic signal system improvements, that could be implemented prior to any new corridor construction.

A separate effort is currently under way by Prince William County to assess the location and feasibility of either a bypass or widening of Va. 28. At this time, a federal environmental assessment has not yet determined if the bypass is feasible.

Prince William County residents voted in favor of a bond referendum in the 2019 general election authorizing the Prince William Board of County Supervisors to provide the additional funding for the project.

Both the possible bypass and Va. 28 widening are estimated to cost about $300 million, of which $200 million was authorized by county residents in the bond referendum. An existing $95 million in NVTA funds could also be used for the project.

Roem said the improvements to Va. 28 will not conflict with ongoing study for a potential bypass or road widening by Prince William County.

“Regardless of what happens with the county’s plan, this will move forward,” Roem said.

Update: This story has been updated to note that the Commonwealth Transportation Board will decide on Manassas Park's request for funding for the project next year.

Traffic-clogged Va. 28 will undergo another study to see if intersection upgrades or other c… 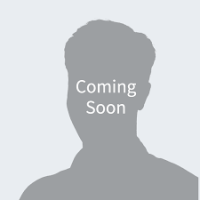 Yes, please! After learning about all the Transform 66 projects & impact to adjacent regions, it really depressed me to think the rt. 28 bottleneck would still exist. Glad to see serious solutions.

A bypass is the only solution. Anything else is worthless. Our politicians should be required to sit in the daily rt 28 disaster until the come up with a solution which actually makes sense.

In fact, a non-tolled bypass (extension of Godwin Dr) is not the only solution, and it's probably not the best one either.

The bypass would induce many new trips onto Centreville Rd through Centreville (and fuel new sprawl development west of Prince William County) that would otherwise use either Sudley Rd or Rte 234 (PW Pkwy) to reach I-66 (whose non-tolled general-purpose lanes will perpetually remain congested during peak commuting hours in the future).

In addition, many residents who live near or east of Centreville Rd would not be served by the bypass, so they would largely continue to endure traffic congestion along Centreville Rd in Yorkshire.

The best solution, which is presently not under formal consideration, might be to build a new parallel roadway through Yorkshire, roughly one block west of the existing Centreville Rd, and to operate the two roadways as one-way pairs, ideally with dedicated bus lanes.

The County could then develop a new small-area plan for Yorkshire to promote a roughly three-block width of mixed-use, transit-oriented development along this corridor, making bus commuting viable for many trips.