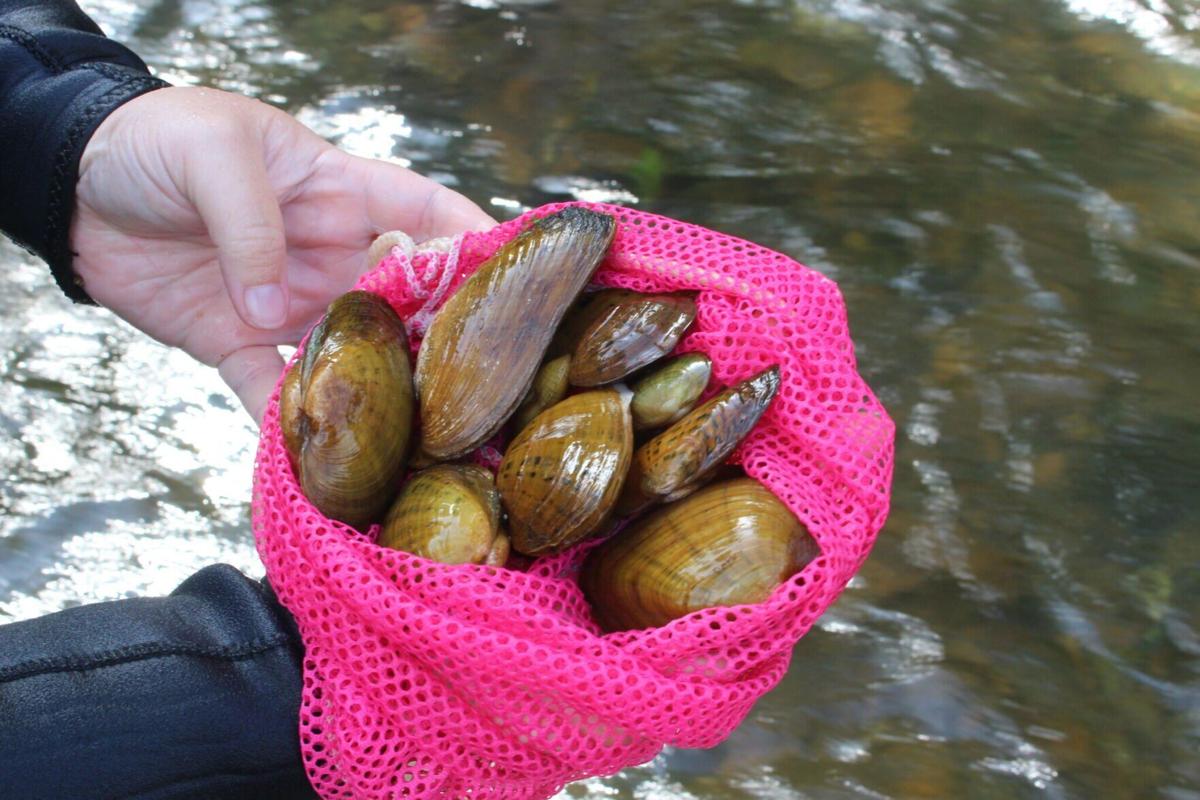 Freshwater mussels from the Clinch River 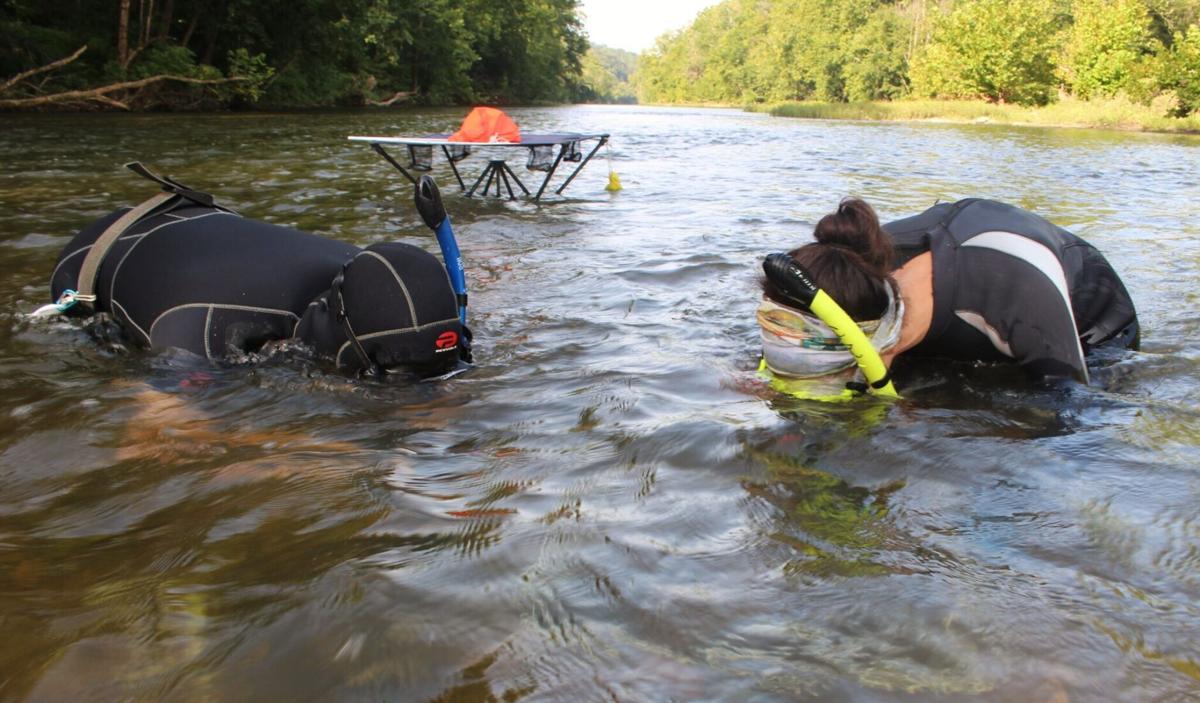 Scientists survey mussel density in the Clinch River where it crosses through Scott County, Va., in August 2021. The Clinch is home to one of the nation’s largest concentrations of freshwater mussels. 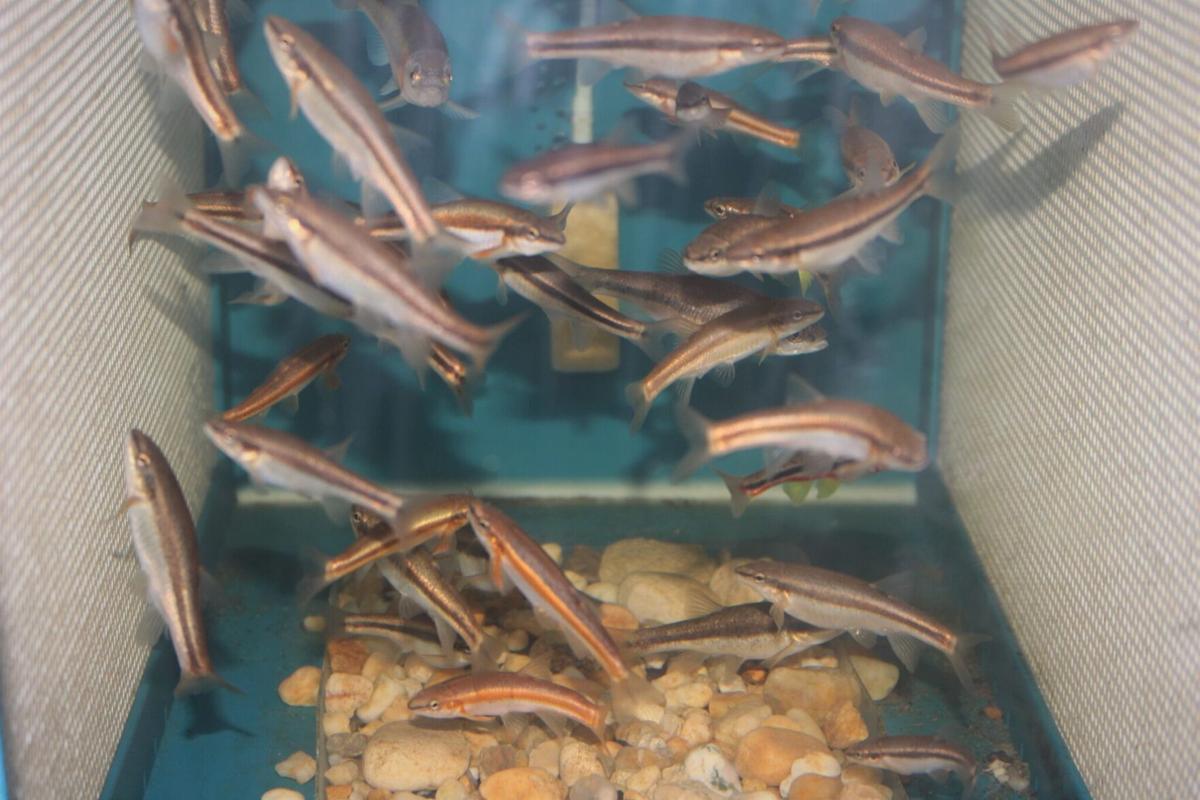 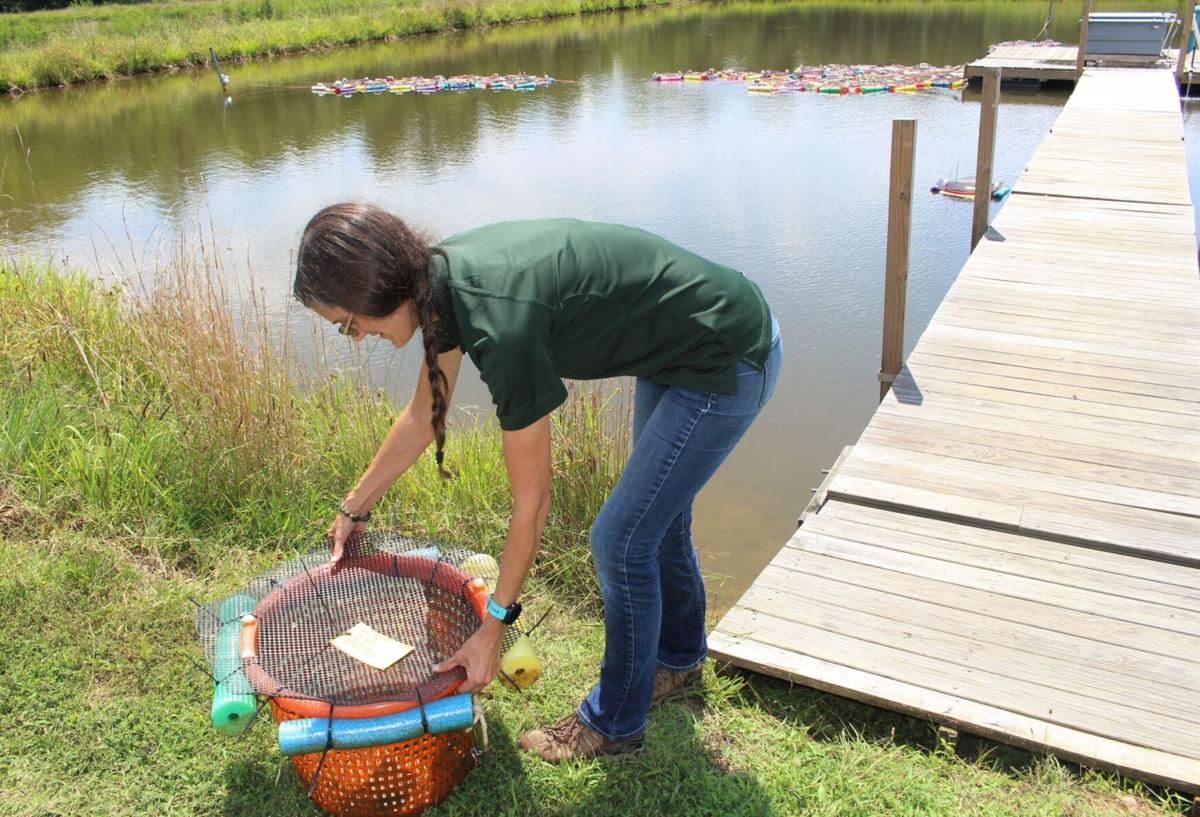 Amy Maynard of the Virginia Department of Wildlife Resources prepares to resubmerge a basket of freshwater mussels being raised at the Harrison Lake National Fish Hatchery in Charles City County.

In the last rocky shoals of the Clinch River before it crosses the invisible line separating Virginia from Tennessee, female mussels are biding their time.

They are waiting for fish, and they will stop at nothing to entice them. The birdwing pearlymussel will deploy her mantle so that it looks just like a snail relished by the greenside darter. The Cumberlandian combshell will extend hers to mimic the larvae of insects perched on her shell. The cracking pearlymussel will scatter packets resembling egg sacs on the river floor.

All of this subterfuge has one aim: to spread their offspring. Those fish that seize the lures in their jaws, hoping for a tasty treat, will be left empty-mouthed in a cloud of mussel larvae. The disappointed fish will then become the mussels’ unwitting nursemaids, carrying the larvae in their gills until the juveniles have grown large enough to drop back to the concealment of the stony river floor.

For millennia, this strategy of trickery served freshwater mussels in the U.S. well, and nowhere did they thrive more than in the Southeast. Of the almost 300 different species of freshwater mussels scientists have identified in North America, an estimated 90 percent call the Southeast home. More than 100 are found in the Tennessee River system that Virginia’s Clinch, Powell and Holston rivers feed. Altogether, roughly 80 species pepper Virginia’s waterways from the southwestern tip to the Atlantic slope.

“Here,” a mussel is “in its Eden,” said restoration coordinator Tim Lane of the Virginia Department of Wildlife Resources, standing knee-deep in the Clinch one August morning.

For most of Virginia’s freshwater mussels, though, that Eden is slipping away. According to the Department of Wildlife Resources, only 30 percent of the state’s freshwater mussels are considered stable. In the state’s portion of the Tennessee River system, a staggering 31 mussel species are designated by Virginia or the federal government as endangered or threatened; in Virginia’s portion of the Chesapeake Bay watershed, where freshwater mussels have received far less attention, six species bear those designations. “In many areas, mussel densities are so low that the eggs of females go unfertilized,” found a 2010 restoration strategy for the Upper Tennessee River basin.

Still other species have been lost entirely: this September, decades after its last sighting in the Clinch, the U.S. Fish and Wildlife Service proposed removing the green-blossom pearlymussel from the endangered list due to extinction.

“They’re just slowly living out their lives, but less and less of them,” said Lane.

For freshwater mussels, which have carefully evolved to fill particular ecological niches, pressures have come from all directions.

“The main reason” for declines “I would say is habitat loss, but there’s a lot of causes of the habitat loss,” said Brian Watson, Virginia’s chief malacologist, or mollusk scientist, with the Department of Wildlife Resources.

Increased runoff from agriculture or the development of forested land can fatally disrupt a mussel’s habitat in a stream. The cutting down of trees on riverbanks can choke waters with dirt while also heating waters to unsustainable temperatures by letting in too much light. Dams box out fish populations that mussels rely on to carry their larvae. And heavy industrial activity from coal extraction — historically the most important industry in Southwest Virginia — also has also left many waterways polluted.

“We’re causing impact after impact,” said Lane. “And now you throw climate change into that.”

Virginia hasn’t stood idly by as species have dwindled. Over the past 25 years, three hatcheries devoted to freshwater mussels have sprung up: the DWR-run Aquatic Wildlife Conservation Center near Marion, a joint DWR-U.S. Fish and Wildlife Service center at the Harrison Lake National Fish Hatchery in Charles City County and Virginia Tech’s Freshwater Mollusk Conservation

Collectively, the institutions have been responsible for propagating millions of juvenile mussels and releasing hundreds of thousands into waterways statewide.

Those stocks have helped stave off some of the most severe losses. But “the hatcheries don’t have enough juveniles to really restore all the sites” where efforts are focused, said Braven Beaty, an ecologist with the Nature Conservancy who specializes in mussels. Furthermore, rebuilding populations comes with some unexpected complications. Rachel Mair, a biologist with U.S. Fish and Wildlife who leads the mussel restoration efforts at Harrison Lake, said that while the hatcheries produce high volumes of mussels, “there’s high mortality.” More difficult still is that because mussels are so extraordinarily diverse, scientists still don’t fully understand many species.

Many scientists struggling to keep populations alive say that Virginia’s restoration efforts have largely been reactive rather than proactive due to a lack of both money and attention. For decades, freshwater mussels have lived in the shadow of their charismatic cousin the oyster. Unpalatable — those who have tasted them describe their flavor as “muddy” — and used only at intervals to make buttons, freshwater mussels are more often than not forgotten despite the fact that, like oysters, they filter huge quantities of water.

The lack of familiarity has been translated into a lack of funding. Mussel restoration dollars have tended to be tied to specific projects, such as cleanup from a 1998 tractor-trailer chemical spill in Tazewell that decimated mussel populations in a seven-mile stretch of the Clinch. But on an ongoing basis, “there really is not a lot of money that’s gone to this,” said Wood.

For many of the people working to restore mussel populations, the solution is clear: Virginia needs a statewide restoration plan.

“To me, the restoration plan is number one,” said Wood. “Let’s get some help identifying where we need protection of mussels and what does that look like.”

Conservationists are rallying behind the idea. The Virginia Conservation Network, one of the most important players’ in the state’s environmental community, has included the development of a statewide restoration plan in its 2022 agenda, as well as an ask for increased funding for hatcheries — two legislative priorities Wood said the Bay Foundation would pursue during the upcoming session.

“Freshwater mussels are an important part of Virginia’s natural heritage and they benefit streams and rivers by filtering water and removing pollutants such as nitrogen,” states the agenda, which is widely used to shape environmental priorities. “These valuable organisms have shown rapid decline, and investments and strategies are needed to protect and restore these populations.”

On that, Southwest Virginia is a step ahead of the rest of the state. Given the unusual concentration and high losses of mussel species in the region, DWR’s predecessor agency first developed a restoration strategy for the Upper Tennessee system around 2002 that advocates say could now serve as a blueprint for a more far-reaching roadmap. That larger plan, which state officials have never had the resources to develop, would cost roughly $400,000 in the Virginia Conservation Network’s estimate.

“It’s not like if we don’t have a plan we can’t do the work, but as we’re getting into more species and tackling more of the teeny species, it would be good to have a plan,” Watson said.

The Chesapeake Bay Foundation is particularly optimistic about what a more coordinated strategy could mean for that watershed’s freshwater mussels. Despite mussels’ importance for water quality and the high number of species in the bay’s footprint — the Potomac is home to 21 freshwater species, while the Rappahannock and York each have 18 and the James 17 — they’ve never been designated a priority species in watershed plans, a special Bay Program committee found earlier this year. That’s put them at a serious disadvantage when competing for federal wildlife funding.

Higher visibility for the species could be one of the main benefits of a statewide plan, said Watson

“That plan is not only looking to guide restoration in Virginia, but it’s also looking to get general information into the hands of decision-makers, so if we were looking to get some kind of dedicated source of funding for freshwater mussel restoration in Virginia, then they would have that in hand,” he said. “If they just don’t know the importance of mussels and how impaired they are, what the benefit would be of restoring them, it would be an easy decision to give the money to oysters.”

How receptive lawmakers will be to ramping up support for freshwater mussels this winter remains uncertain as problems linked to the ongoing pandemic and supply chain disruptions linger and lawmakers prepare to return to a divided General Assembly.

“I think the protection of freshwater mussels is something that a wide diversity of people care about,” he said. “The idea that there’s species that are here today that might not exist in 50 years, I don’t think that’s a partisan issue.”