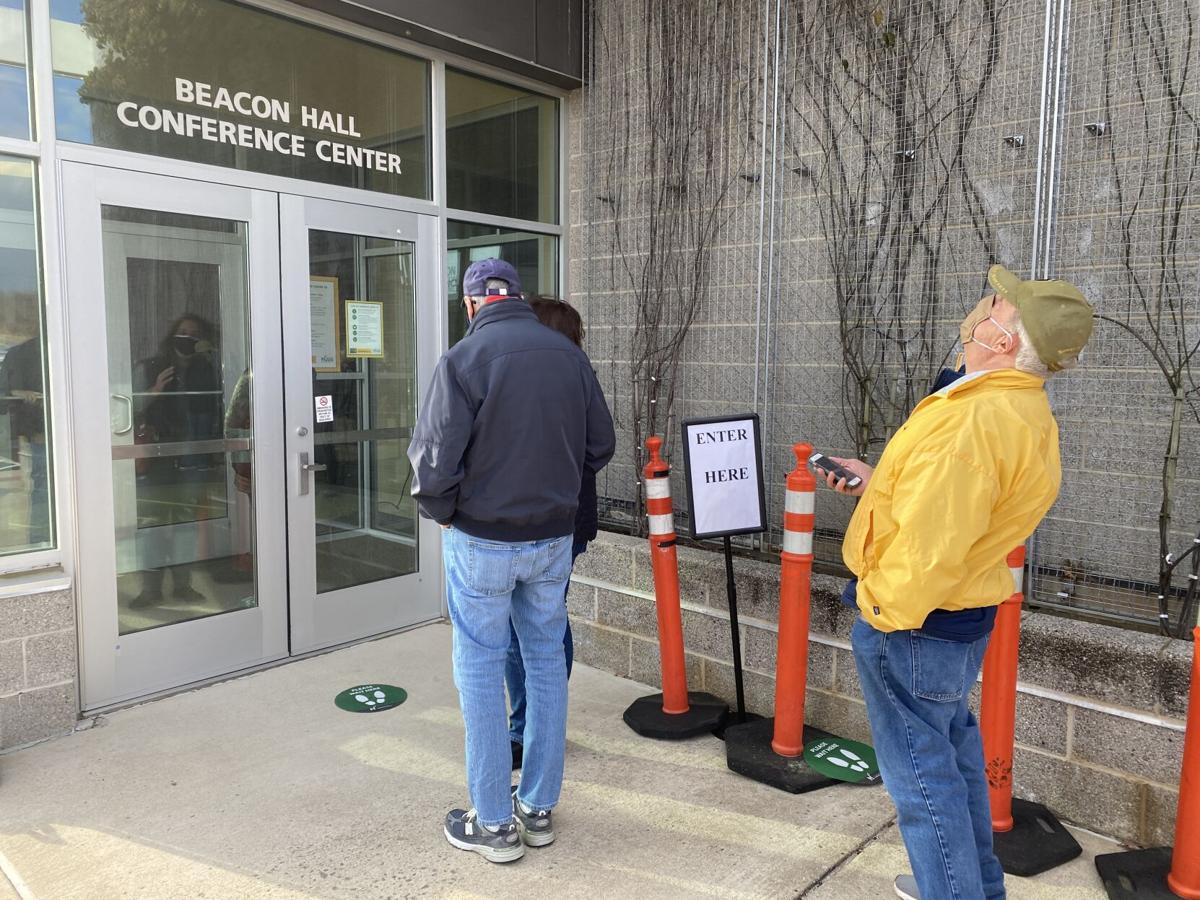 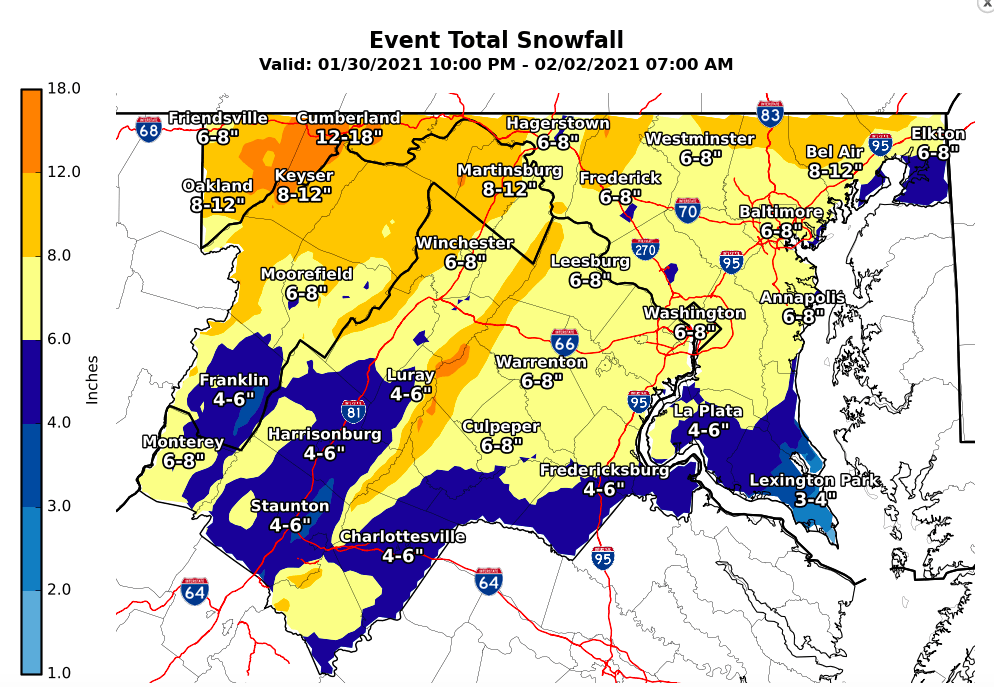 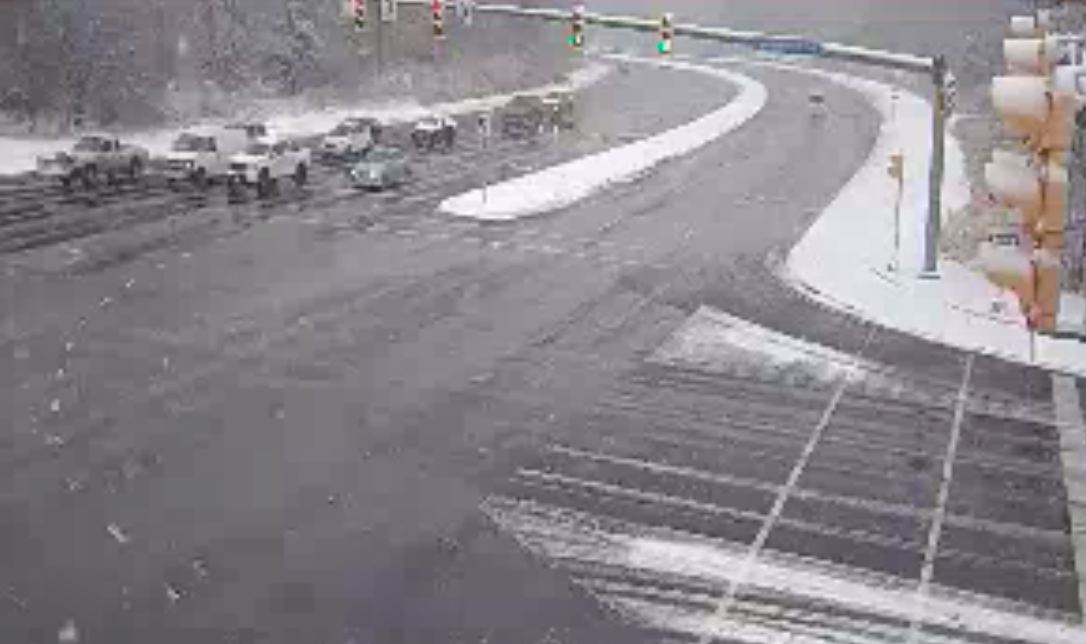 A screenshot from the VDOT camera at the intersection of Minnieville Road and Prince William Parkway.

UPDATED: The winter weather has canceled COVID-19 vaccinations and testing in Prince William County today, but those who were scheduled for vaccine today will receive new appointments scheduled over the next few days, according to the Prince William Health District.

Today, Monday, Feb. 1, was scheduled to be the opening day for a new health district vaccination clinic at Potomac Middle School. A third clinic is set to open tomorrow, Tuesday, Feb. 2, at the Edward L. Kelly Leadership Center in Manassas.

Those who were scheduled for shots at both Potomac Middle and Beacon Hall, the Prince William Health District’s existing vaccination clinic at George Mason University’s Manassas, were notified of the cancellations over the weekend.

They should watch their emails for rescheduled shots in the coming days, according to Kathy Stewart, spokeswoman for the Prince William Health District.

The health district is now expecting to receive about 6,000 vaccination doses each week from the Virginia Department of Health.

The county is still working through vaccinations for those in the 1a and 1b priority groups and is making appointments from a waiting list, which now contains at least 25,000 names.

It’s not clear how many shots the county health district expects to deliver on a weekly basis. The health department has so far not been able to disclose how many people are on the waiting list or how many shots are expected to be administered daily at the two new clinics, Stewart said Monday.

The vaccination clinic at GMU’s Beacon Hall is administering 360 shots a day, according to health district officials.

The Prince William Health District has so far received a total of 43,450 doses of vaccine and has administered 26,019 shots, or about 59% of the doses received, according to VDH data.

The number includes vaccinations administered by the health district and local hospitals as well as those administered in local nursing homes, assisted living facilities and group homes.

A certain number of doses are also being administered by community partners, such as the George Mason University’s Mason and Partners Clinic.

Those who were scheduled for shots today, Monday, Feb. 1, can also call the health district’s call center for assistance at 703-872-7759.

Those who are eligible to receive the COVID-19 vaccine and are not registered for the waiting list, can sign up at http://bit.ly/PWHDwaitlist.

Sunday, Jan. 31: Prince William County is expected to receive 6 to 8 inches of snow by Tuesday night, according to the latest predictions, and "icy patches" were being reported on several main thoroughfares Sunday morning.

The Virginia State Police continues to ask Virginians to stay off the roads if possible today as the snow is expected to intensify throughout the day before tapering off tonight.

As of 9 a.m. Sunday, the Virginia State Police was responding to 34 crashes across the state. "Fortunately, most only involve damage to vehicles and no injuries," the state police said in a tweet.

As of 9 AM, #VSP troopers across #Virginia are on scene of 34 traffic crashes - fortunately, most only involve damage to vehicles & no injuries...like this one from earlier today on I-95 in #Hanover Co. It's not worth the risk. #Stayhome #staysafe #WinterStormOrlena @VaDOTRVA pic.twitter.com/k4eUbsZPQr

The clinic delivered 230 inoculations in the first hour, and many teachers and staff members scheduled for shots today are coming in early, Lateef said.

The parking lot at the school has been plowed and the walkways have been shoveled. Teachers and staff may reschedule their vaccinations, however, if they feel unsafe driving to Unity Reed High School either today or tomorrow, Lateef said.

The Virginia State Police is asking residents to avoid travel if possible during the expected winter storm, which forecasters say will bring 4 to 8 inches of snow and up to one-tenth of an inch of ice to Prince William County and surrounding areas of Northern Virginia between early Sunday morning and Monday night.

A winter storm warning is in effect from 1 a.m. Sunday to midnight on Sunday night, according to the National Weather Service.

Snow is expected to overspread the area between 3 and 5 a.m. Sunday morning, with the steadiest snow falling through the afternoon before tapering off to an intermittent mix of light snow, sleet and freezing rain on Sunday night.

Additional snow is expected Monday through Monday night with additional accumulations of around 1 to 3 inches.

The two phases of the storm are expected to bring a total of 4 to 8 inches of snow to the area, the National Weather Service says.

“Travel will be very difficult Sunday through Tuesday morning due to a prolonged period of snow and wintry precipitation with temperatures near or below freezing,” the winter storm warning says.

The Virginia Department of Transportation has been working to pre-treat the highways today, but slick and dangerous conditions are still anticipated due to the forecasts calling for significant snow accumulations, ice and rain.

Those who must travel should check Virginia road conditions at www.511virginia.org or download the VDOT 511 app.

Drivers should clear all snow and ice from their vehicles’ roofs, trunks, hoods and windows before travel. Use your headlights and drive for conditions, including slowing speed and increasing traveling distance with other vehicles.

The state police asks that people not call 911 for road conditions in order to leave the lines open for emergencies.