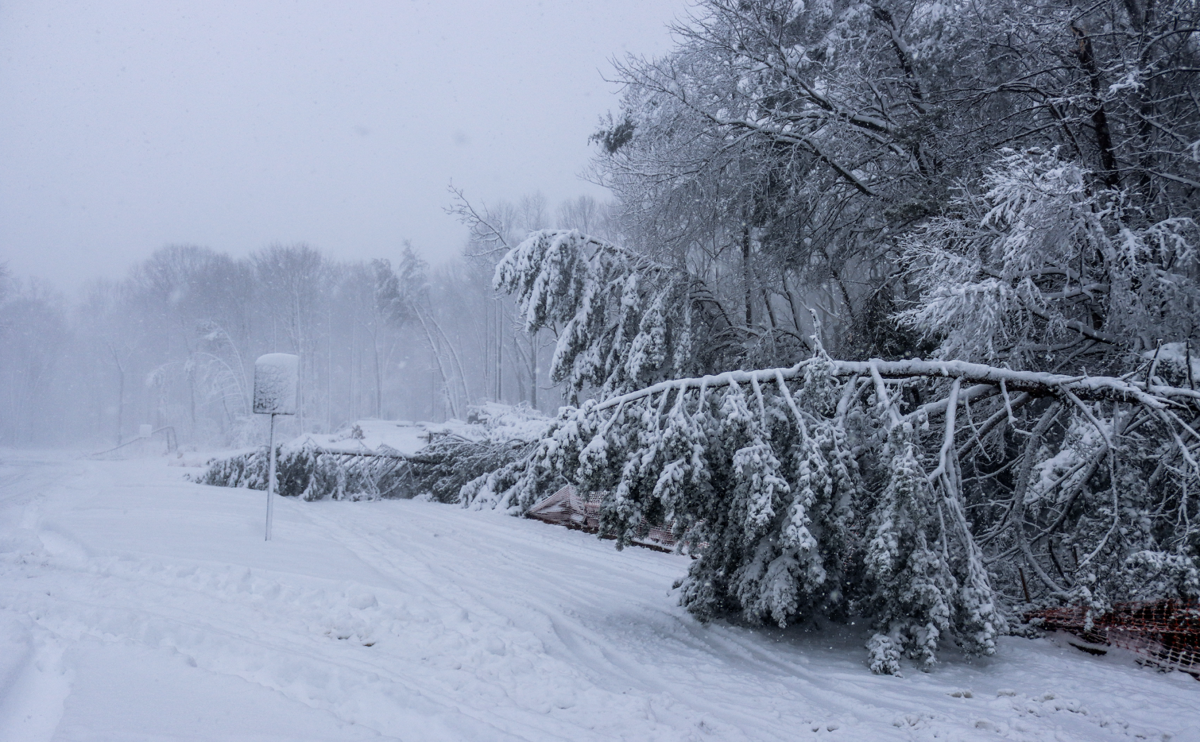 Dale City: A downed tree at Darbydale and Eastlawn Avenue. 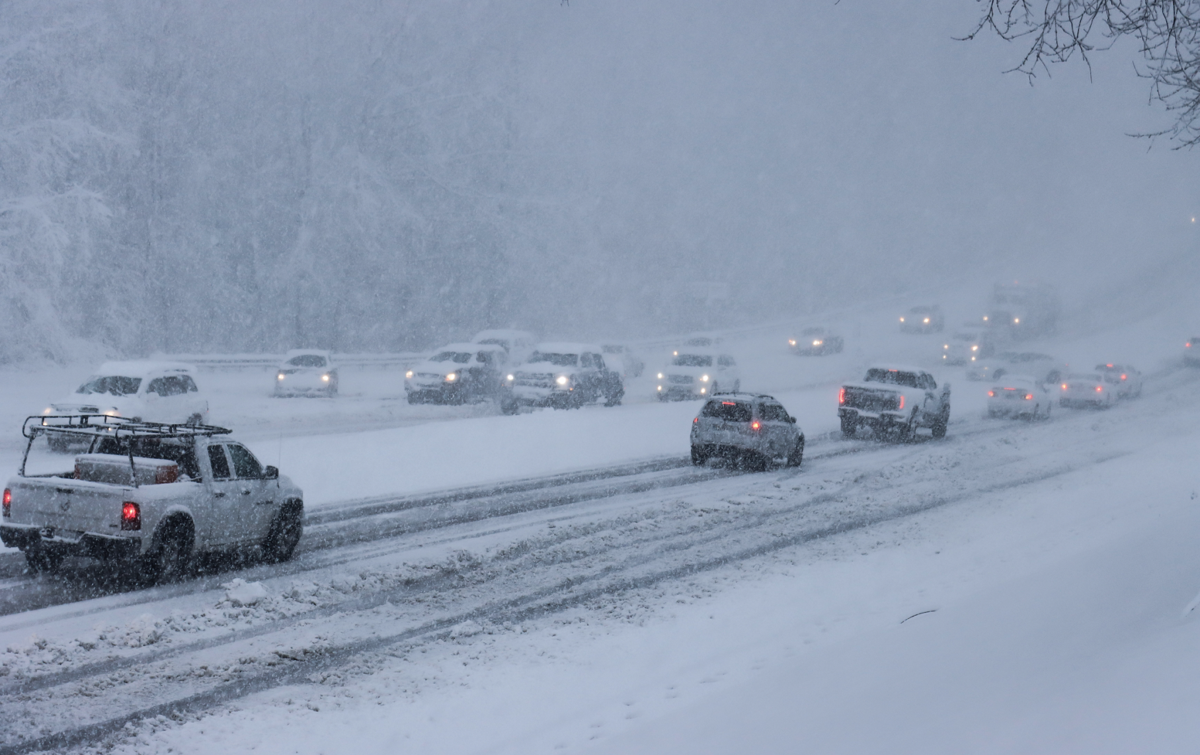 In response, Prince William County is opening two warming centers Wednesday -- one in the mid-county area and one in Dumfries, officials announced Wednesday morning.

The warming centers are open now and will remain open until 5 p.m. They are located at:

The facilities have heat, restrooms and power to charge mobile devices. Masks or face coverings are required, the announcement said.

Power outages in Prince William County continue to be centered around north Woodbridge, Dale City and Dumfries, according to the Dominion and NOVEC websites.

About 3,462 Dominion Energy customers remain without power in the county, including 389 homes in the Dale City area, 169 near Graham Park Middle School, 137 along Batestown Road and 62 along Possum Point Road.

NOVEC is reporting about 320 customers still without power in spotty outages around the county.

At the height of the storm's power outages on Monday night, about 20,000 Prince William County homes and businesses were without power.

According to Dominion, about 43,000 customers remain without power in Northern Virginia as of Wednesday, Jan. 5.

Dominion Energy officials warned late Monday that restoring power to all of its Northern Virginia customers would take "several days." That was proving true for about 6,600 area residents and businesses that were still without power Tuesday afternoon.

The number included about 4,800 Dominion Energy customers and about 1,800 NOVEC customers, according to the utilities' outage maps.

Areas around eastern Prince William -- including Occoquan, Woodbridge, Dumfries, Montclair and Triangle -- remained the most affected by outages Tuesday.

At least 500 were still without power around Dale City, while there were 32 separate outages around Woodbridge, some affecting dozens of residents.

Prince William County officials had opened three warming shelters around the county by noon on Tuesday. They were scheduled to remain open until 5 p.m., county officials said.

The shelters are available in the following locations:

The centers have heat and restrooms, power for charging mobile devices and public wifi access, according to a county news release.

It could be a long, cold night for about 20,000 Prince William County residents who remained without power late Monday. Restoration of power could take "several days," according to Dominion Energy officials, as crews from outside the state are not expected to arrive until Tuesday.

Meanwhile, traffic was still at a standstill on Interstate 95 near Fredericksburg as crews worked to clear stuck trucks and cars and clear roadways, according to the Virginia Department of Transportation.

We wish we had a timetable, ETA or an educated guess on when travel will resume on I-95. It's at a standstill in our area with multiple incidents. Its frustrating & scary. Please know our crews don't stop. Crews will work 24/7 until ALL state-maintained roads are safe for travel pic.twitter.com/HdAWTDEJ22

The National Weather Service has posted its first  preliminary snow totals for today's storm, which show totals ranging from about 5 inches in Manassas Park to 12 inches in Dale City and Dumfries.

As of about 10 p.m. Monday, about 15,300 Dominion Energy customers and about 5,300 NOVEC customers in Prince William remained without power, according to outage maps on both utilities' websites.

There were still about 99,000 Dominion Energy customers without power in Northern Virginia, according to Dominion spokeswoman Peggy Fox, who tweeted at about 9:45 p.m. Monday to say the effort to completely restore power would likely take "several days."

Restoration will take several days. Crews from other states arrive Tuesday to help.

Temperatures had dropped to the low 20s Monday night and were forecast to drop to a low of 19 degrees by 8 a.m. before rising to an expected high of about 36 degrees late Tuesday afternoon, according to the National Weather Service.

Totals in other parts of the county as of about 1 p.m. were:

The National Weather Service is warning of icy conditions Tuesday morning on still largely untreated roadways. Motorists are urged to use extra caution and assume that any surfaces that look wet or slushy may in fact be icy.

The snow seemed to have stopped falling across much of the county by about 2:30 p.m. Monday, but more than 20,000 remained without power, according to Dominion Energy.

Across Northern Virginia, more than 142,000 homes and businesses were still without power Monday afternoon, including 20,338 in Prince William County.

The highest number of remaining outages in Prince William County were occurring in the Triangle, Woodbridge, Occoquan and Dale City areas.

There were at least 50 separate outages in Dale City and Woodbridge; 37 in Dumfries and Triangle; 12 in Lake Ridge; 10 in the Manassas area; and 11 around Nokesville. Many of the individual outages were affecting hundreds of customers.

One positive note: In Woodbridge, a large outage in the U.S. 1 corridor affecting about 3,000 customers earlier in the day had been whittled down to about 1,100 customers as of 2 p.m. Power remained out between Rippon Boulevard and Featherstone Road. There was no estimated restoration time, according to the Dominion Energy outage map.

Meanwhile, multiple trees have been reported down across the county, some of which were blocking roadways.

Virginia Department of Transportation officials continued to respond to stuck vehicles and crashes throughout the state, including a crash involving six tractor-trailer trucks that closed southbound Interstate 95 in Stafford County at about noon Monday. The lanes were still closed as of about 2 p.m., VDOT tweeted.

I-95 SOUTHBOUND: I-95 SB remains closed for crash involving 6 tractor-trailers near exit 136 (Centreport Pkwy.) in #Stafford. Numerous SB motorists are stopped behind this incident. We will get traffic moving again + reach everyone. Plows + towing crews are working hard to clear. pic.twitter.com/EtgaTdODAf

Northbound lanes were also backed up as crews worked to help disabled tractor-trailer trucks and plow the roadway.

Road are continuing to deteriorate and nearly 14,000 residents and businesses were without power as of about 11 a.m. on Monday, Jan. 3, according to officials.

Dominion Virginia Power is reporting a total of about 90,000 Northern Virginia residents without power, including 13,879 in Prince William County.

Dominion is reporting at least 63 separate outages across the county, with the majority in the Woodbridge and Dumfries areas.

"Wet snow and gusty winds will continue to impact our service area until this evening," Dominion officials said in an alert posted on their website Monday morning.

"Crews are working around the clock to safely restore power to those customers affected by the storm."

Dominion is also encouraging its customers to download the Dominion Energy app from the Apple App Store or Google Play Store, call us at 1-866-DOM-HELP (1-866-366-4357), or report online by clicking here.

Road conditions are treacherous. Prince William County police are continuing to urge residents to stay off the roads if possible.

The county is reporting five road closures as of 10:30 a.m., including:

9:22 a.m.: Officials are urging residents to stay off the roads this morning if possible, as snow continues to fall across Prince William County and conditions deteriorate. The county is reporting at least six road closures, including major thoroughfares such as Dale Boulevard in Dale City and U.S. 29 and Interstate 66.

Heavy snow is expected to fall throughout the day until 4 p.m. Prince William County, Manassas and Manassas Park is forecast to receive 5 to 10 inches of snow with the heaviest amounts expected south of U.S. 50.

The heaviest snow will fall through early afternoon, according to the National Weather Service.

Visibility will be reduced to below one-half mile at times in heavier bands of snow. Those who must travel should keep an extra flashlight, food, and water in their vehicle in case of an emergency, the weather service says.

So far, power outages in Prince William County are limited. About 104 people are without power in the mid-county area north of Hoadly Road, according to the Dominion Power outage map.

Dominion is reporting about 40,000 customers without power across the state, with about 24,000 of those being in Northern Virginia. Most of the outages are in Fairfax and Stafford counties.