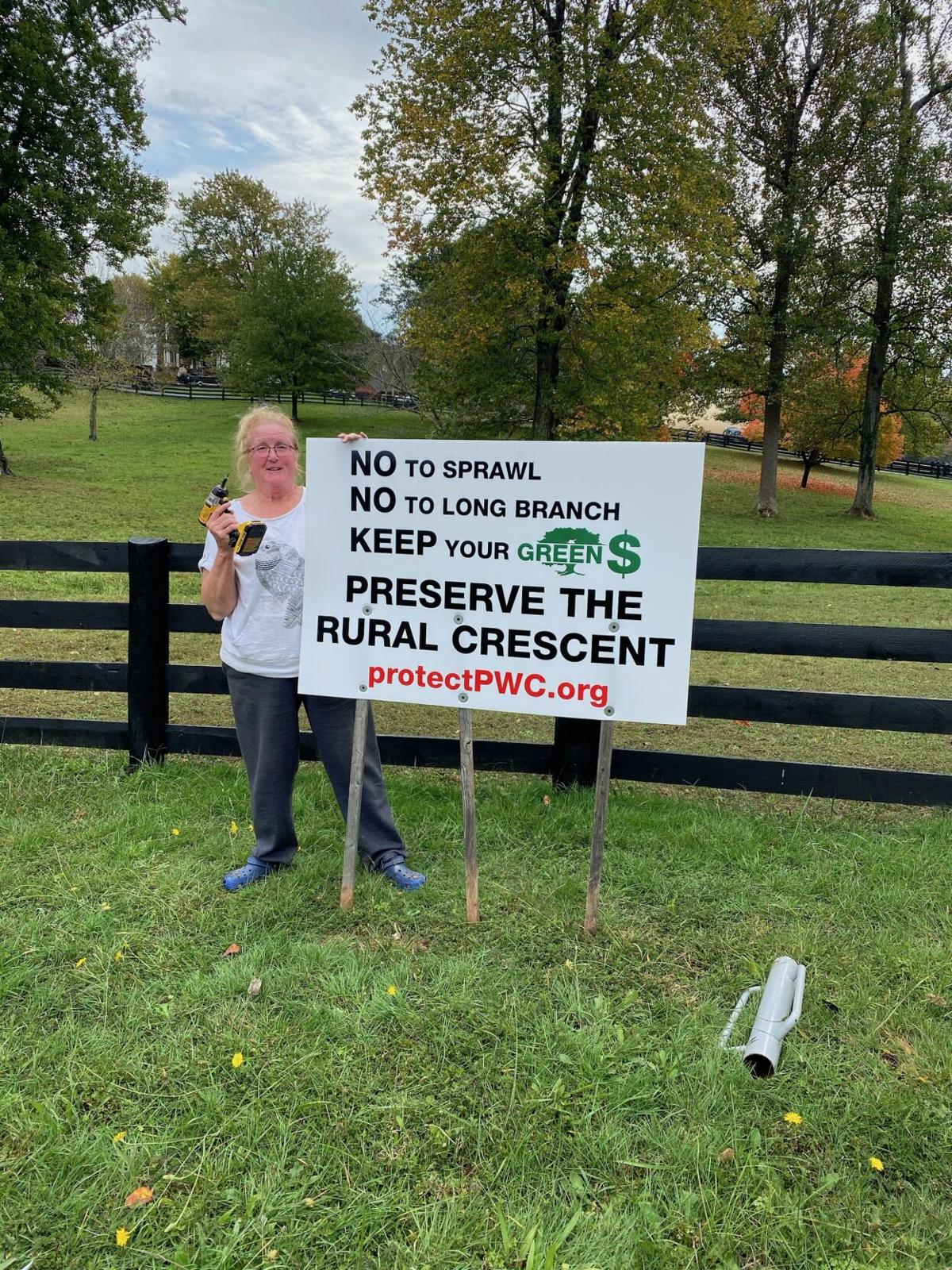 Karen Sheehan, a resident of the county’s rural area, with one of a handful of roadside signs recently erected to oppose the "Preserve at Long Branch" development which will be before the Prince William County Board of Supervisors on Oct. 20. 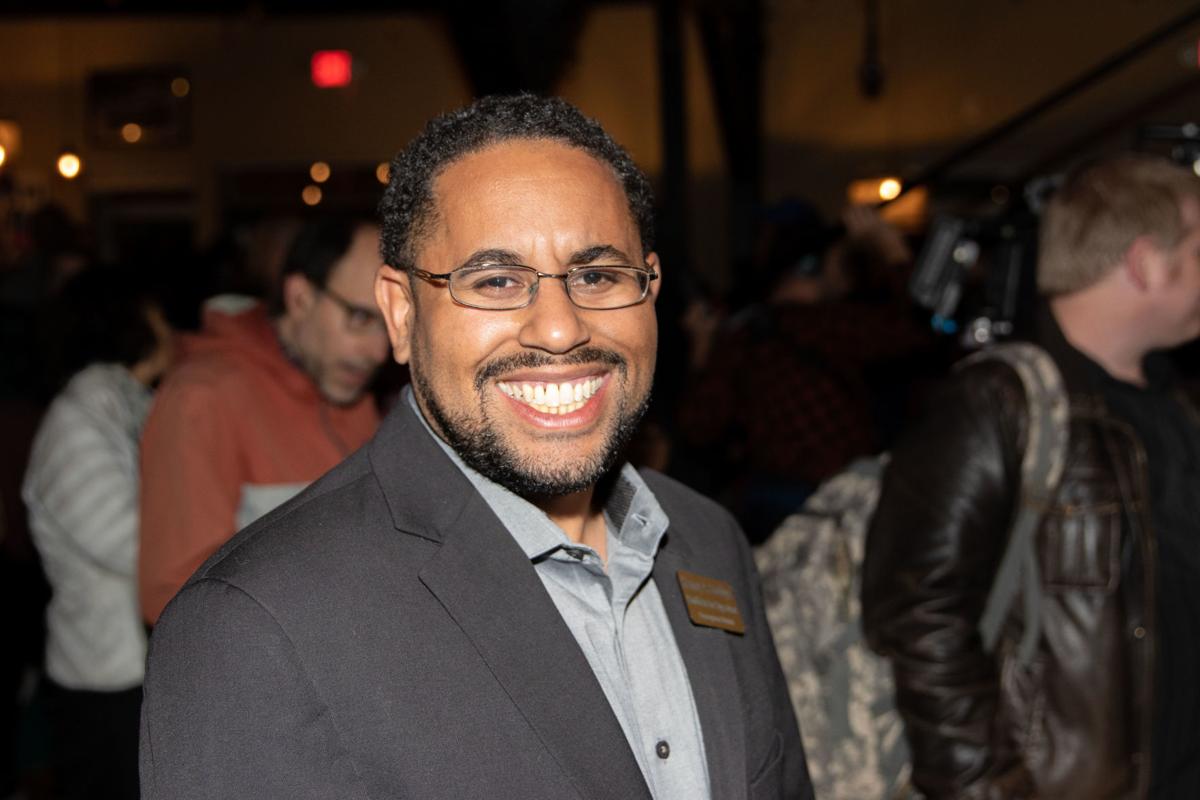 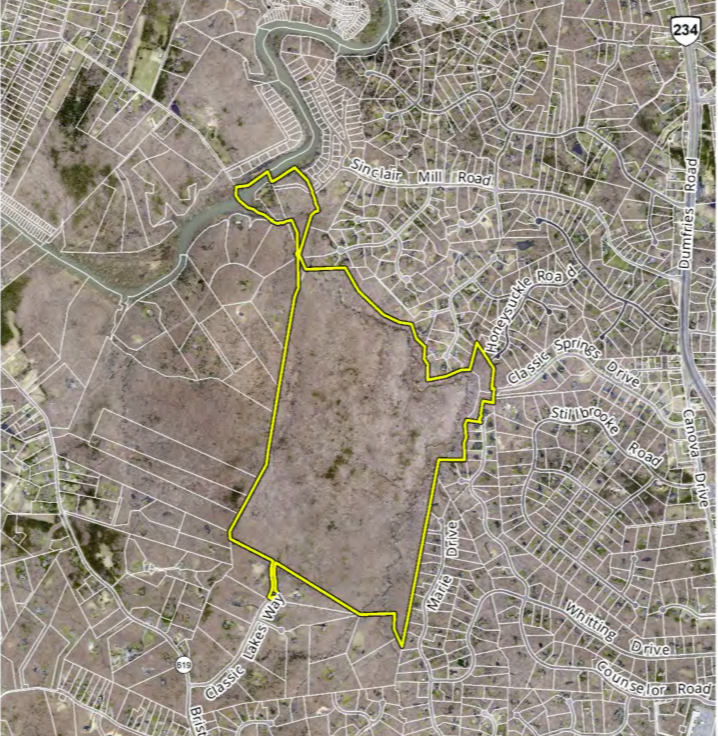 The "Preserve at Long Branch" proposes 102 homes on 1 to 4 acre lots on about 339 acres in the Independent Hill area, roughly located behind the Woodbine Woods, Wildwood Estates and Woodbine Forest subdivisions.

UPDATED: The developer behind the “Preserve at Long Branch,” which proposes 102 new homes in Prince William County’s rural area, confirmed Friday he requested the project be pulled from the board of county supervisors' Tuesday agenda.

Mark Granville-Smith said he requested the delay as a result of concerns he heard from area residents during recent virtual meetings with local citizens’ groups.

“We’re going to try to address any issues that might be outstanding, and we’re going to come back sometime later,” Granville-Smith said Friday. “The goal here is to get the best job done for our citizens and for the county. We’re going to do the best we can and see where we go.”

The Preserve at Long Branch requires both a comprehensive plan amendment and a rezoning from the Prince William Board of County Supervisors. The proposal was scheduled for a public hearing and vote during the board’s upcoming Tuesday, Oct. 20 meeting.

The project is controversial because it’s proposed for the county’s rural area, often called the “rural crescent,” where development is limited to one home per 10 acres and the extension of public sewer lines is generally prohibited.

Granville-Smith is proposing 102 new homes on lots of between one to four acres along with a 190-acre public park with trails and an access to the Occoquan River for non-motorized boats. The current zoning allows only about 31 homes by-right.

Granville-Smith first proposed the development back in 2012 under the name “Mid-County Park and Estates.”

The move comes a day after Supervisor Kenny Boddye said he would not support the needed rezoning and comprehensive plan amendment, in part because it would remove land from the rural area without replacing it.

Boddye, D-Occoquan, is considered a key vote on the project because the board’s three Republican supervisors have already indicated their opposition. Boddye’s vote against the project would have denied it the five votes needed to pass.

A proposal to allow a 102-home development within the county’s designated rural area, also known as the “rural crescent,” does not have the support of a key Prince William County supervisor, potentially putting the project in jeopardy as it heads to the Prince William Board of County Supervisors for a vote next week.

Supervisor Kenny Boddye, D-Occoquan, said during a community forum on land-use and transportation hosted by the Prince William Conservation Alliance Wednesday he does not currently support the “The Preserve at Long Branch” because of its impacts to the county’s rural area.

“Right now, there’s too many question marks with the Preserve at Long Branch and the precedent it sets,” Boddye said. “... I’m not in a place right now where I really support it.”

Boddye said he opposes the development  in part because the comprehensive plan amendment needed to move the project forward would remove land from the county’s rural area without adding it back elsewhere. In the past, the board has typically allowed changes to the county’s rural boundary only if more land is added back in another location.

“We’ve had other [comprehensive plan amendments] in the past that have done similar things where at least those CPA’s have added some land back to the rural crescent, whereas this one does not,” Boddye said.

The development, proposed for 339 undeveloped acres in the Independent Hill area behind the Woodbine Woods, Wildwood Estates and Woodbine Forest subdivisions, has sparked opposition from local conservationists since its first iteration was presented in 2012. They say its approval would set a precedent for allowing higher density development in the rural area, potentially raising infrastructure costs for new roads and schools.

The current policy for the rural area, adopted in 1998, allows only one home per 10 acres and generally does not allow extensions of the public sewer lines.

The development cannot be approved without the support of five of the board’s eight supervisors. The board’s three Republican supervisors  have largely opposed residential development and sewer extensions within the rural crescent, with few exceptions. A fourth “no” vote from one of the board’s five Democrats would deadlock the board, stopping the project from moving forward.

Mark Granville-Smith, the project’s developer, said Thursday that he is continuing to do outreach to supervisors ahead of the project’s public hearing, set for next Tuesday, Oct. 20.

“I’ve worked with the county and the citizens for over eight years to make this the best project it could be, and that’s what I’ve done,” Granville-Smith said.

Granville-Smith has made significant changes to the development since he first brought the proposal forward in 2012, including reducing the number of homes, offering $4.6 million in proffers and adding 190 undeveloped acres, which would be given to Prince William County for public parkland. Granville-Smith has promised the park would include a trail and non-motorized boat access to the Occoquan River.

“I’m giving the county a 190-acre park with access to the Occoquan River. And full cash proffers, which they would not otherwise get,” Granville-Smith said. “You’ve got to make a decision. Is this good for the county? is this good for the public benefit? Or do we keep this line in the sand that has been a division between the east and west ends of the county for 22 years?”

“The rural preservation study that was initiated in 2012 has yet to be acted upon after eight years,” Granville-Smith said. “The decisions that need to be made at the county board level are significant. They have to finish their review of the rural study.”

The board of county supervisors is expected to begin discussing changes to the county’s rural policies later this year or in early 2021 as part of the ongoing update of the county’s comprehensive plan.

During the Wednesday evening online meeting, Boddye said the county’s current land use policy is “not working.”

“One of our only mechanisms of preserving parkland and open space, or getting trails done, or really having anything ceded to the county to do things in terms of greenspace, is through the development process and through the land use process,” Boddye said.

“We just don’t have any mechanisms from a county and public perspective to preserve parks and greenspace right now.”

He will flip when the money is right for him. He doesn't care for the rural crescent.

He will flip. The dema need that tax revenue to continue the programs for welfare and illegals they got going on.

I doubt it, quit your conspiracy theories.

How long before the Democrats force him into flipping?

our supervisors are worthless, boddeye included