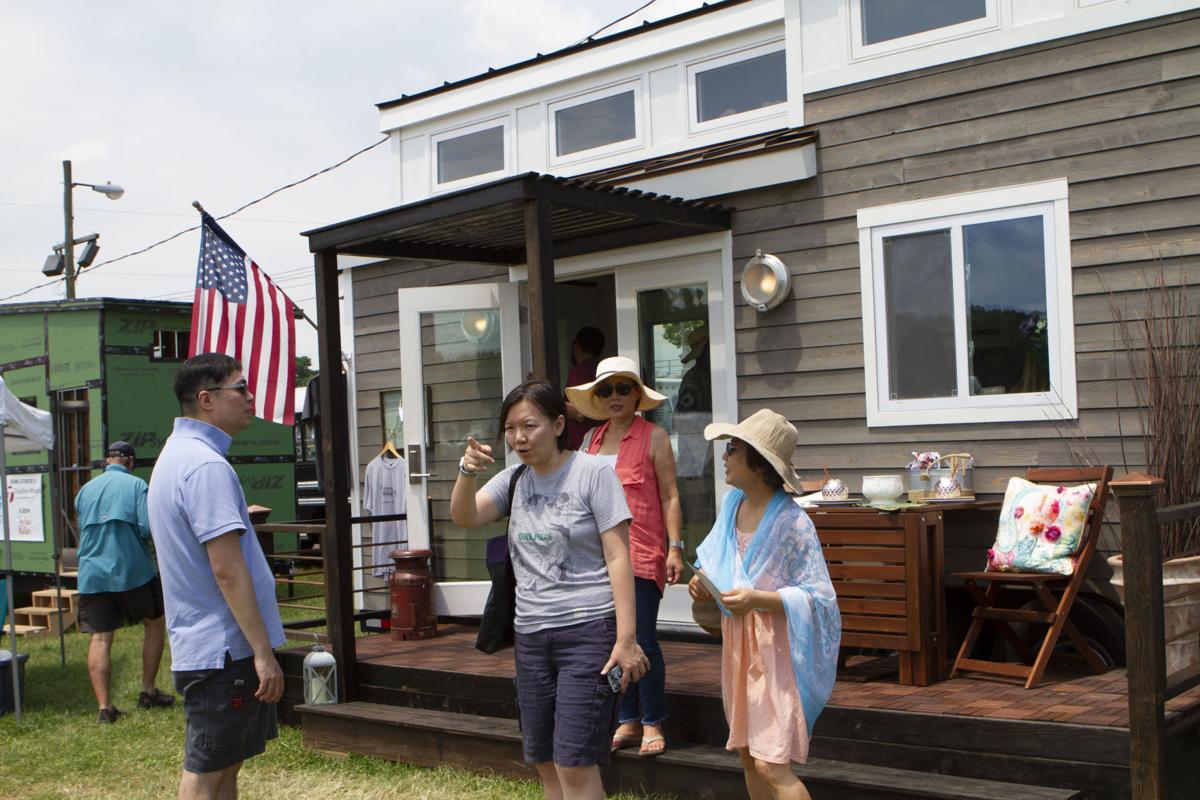 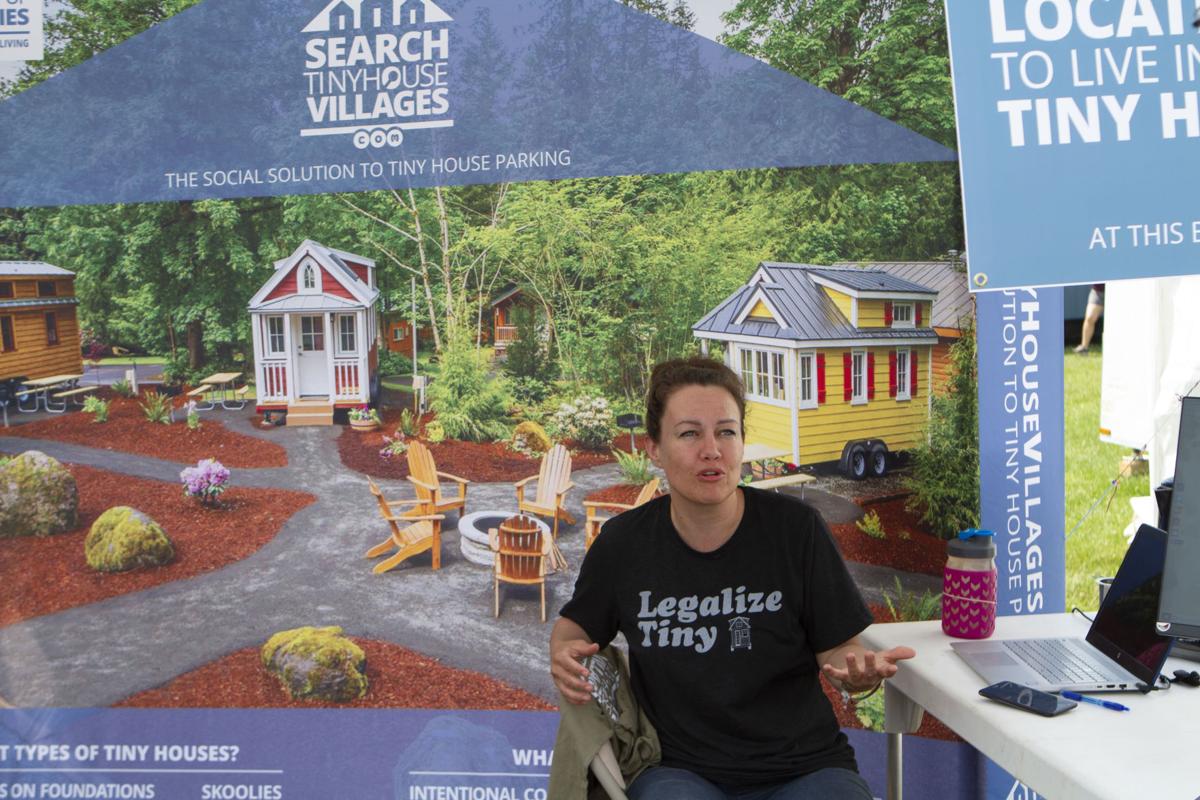 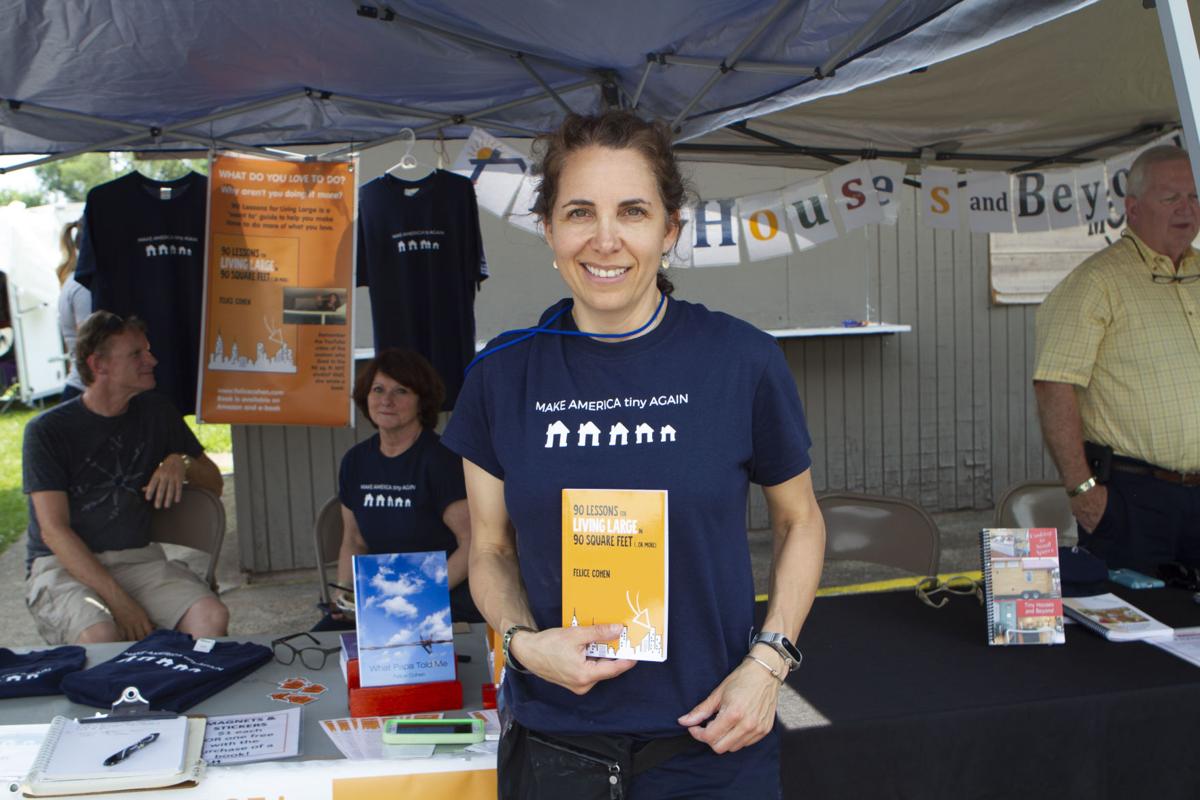 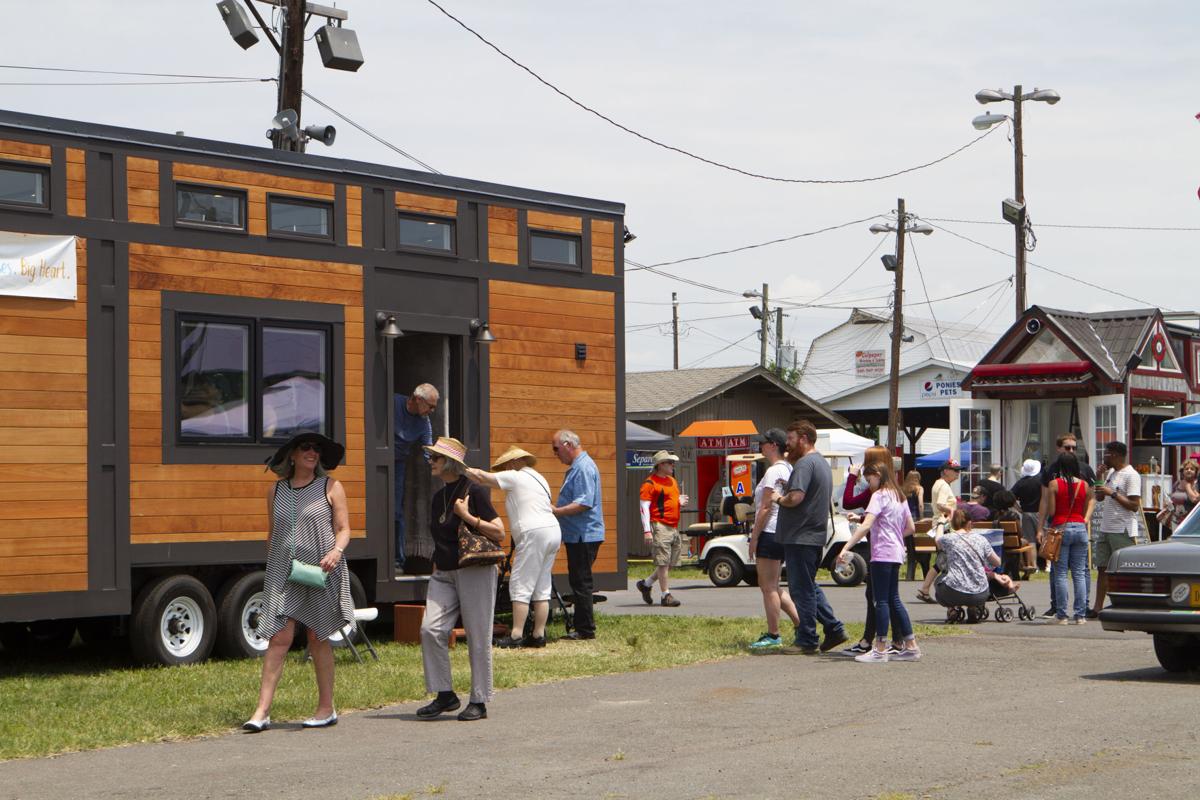 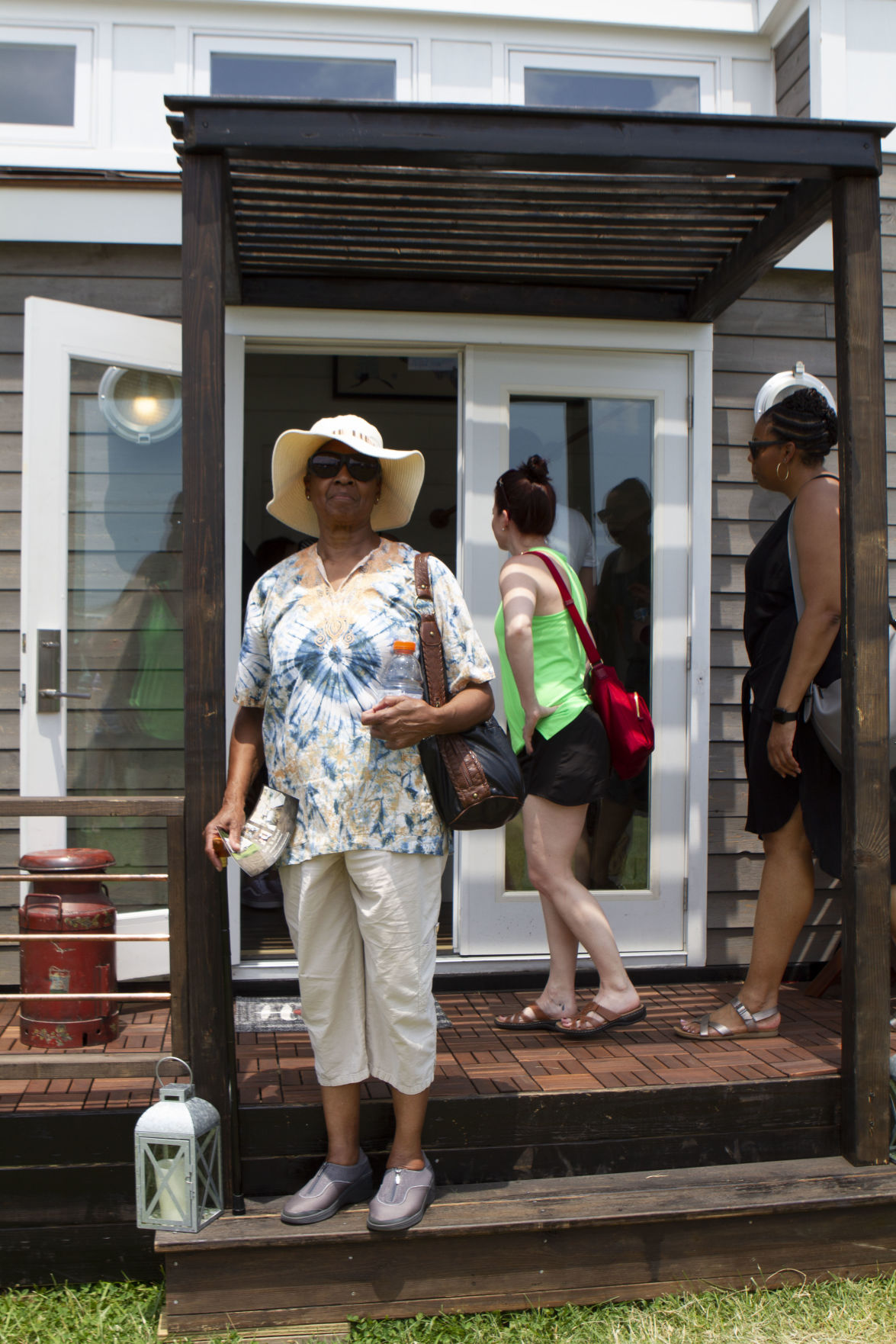 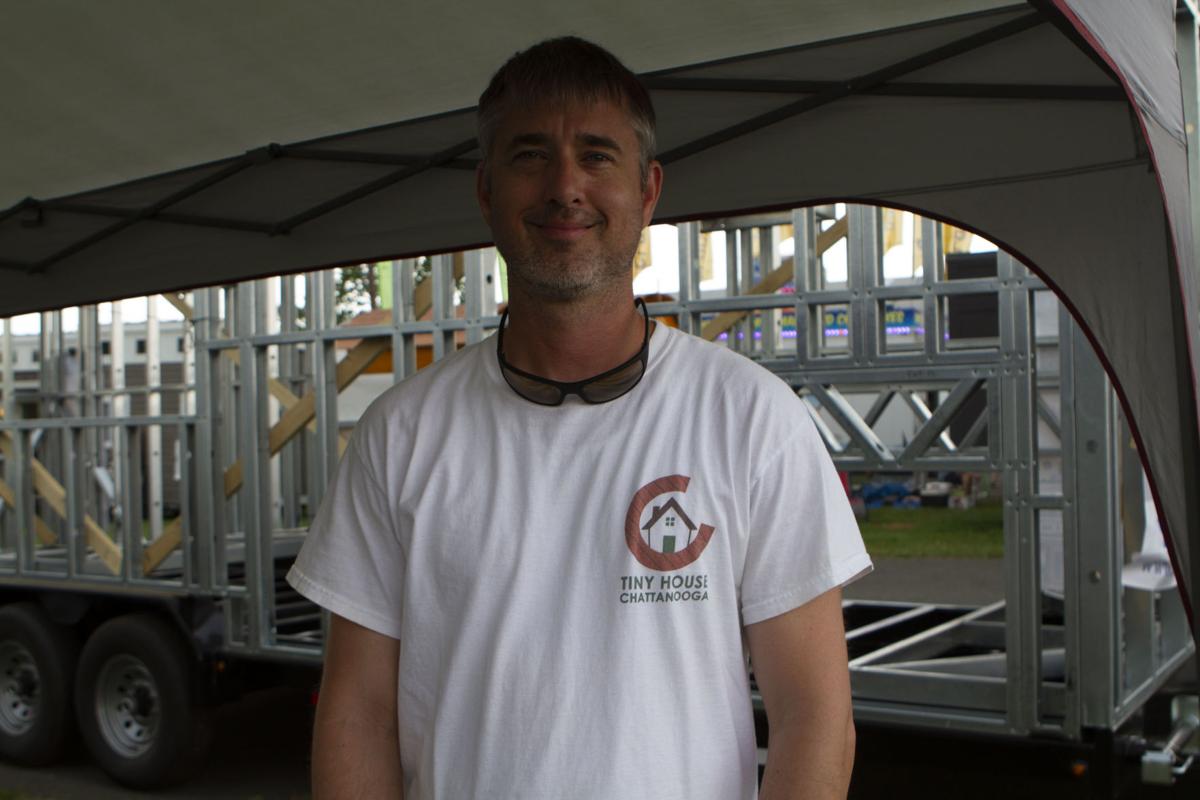 Whether it’s covered wagons, tents or tiny houses – micro-living is making a comeback around the country.

That trend was evident locally last month, when the Prince William County Fairgrounds teemed with folks interested in miniature abodes, despite the 100-degree bake.

“Oh, I’m just curious,” said Shirley Stewart, 79, from under a big hat. She drove up with a friend from Fredericksburg. “I would definitely need a bedroom on the first floor.”

This was not your hippy-dippy crowd.

“Most of my clients are between 40 and 50 years old,” said Mike Bedsole, standing under his living-room-sized awning. Bedsole owns Tiny House Chattanooga, which specializes in steel-structured tiny houses. He built the YouTube-famous Bryce Langston’s 16-foot tiny home.

“Lending is our biggest problem,” Bedsole said. Classified as RVs until now, tiny house sales have been stymied by a lack of financing options because lenders treated them more like vehicles than homes.

Well, that sounds promising. But let’s say you’ve picked the tiny home model you want, have the money in hand and live in the Fauquier or Prince William counties. Are you in for an uphill battle to reside, legally, in your tiny house?

In short, that depends on your definition of “tiny house.” In Prince William County, there are no special rules for tiny homes. They must comply with the rules for every other kind of single-family home.

No special rules for tiny homes

“The current view in Prince William County is that we don’t distinguish ‘tiny houses’ from other houses. Our focus is on single-family homes,” said Prince William building official Eric Mays. “The structure either meets the statewide building code, or it doesn’t.”

So, how small can a home be and still fall into legal single-family dwelling status?

Two massive paperbacks lie on the table, each one 3 inches thick. Can we look it up?

Currently, the Prince William County zoning ordinance allows tiny homes to be built only on lots zoned “non-conforming agricultural.” Those are lots that were zoned agricultural before the county ordinances limited building on such lots to one home per 10 acres, Fink-Butler said in an email.

The county has no requirement dictating that tiny homes should be a certain size, however.

“The minimum used to be 700 square feet, but that was changed,” Fink-Butler said. “There is no minimum now. It’s all a matter of how your structure is categorized.”

• Stick-built is your conventional house, of any size, built on a foundation. County approval of construction, placement, sewage system, utilities and water connections are all required.
• Industrial (factory-built and delivered) require state approval as well as county approval for sewer and water connections.
• RVs (drivable campers) are approved by Housing and Urban Development. They may be lived in at a campsite only, for no longer than 30 days, or parked in – but not lived in – a driveway. A manufactured mobile home/trailer that can become a permanent dwelling if tied down in an approved area.

Among other things, it instructs that tiny homes of just 88 square feet are legal according to the 2015 International Residential Code. That would include a living area/kitchen of at least 70 square feet and a bathroom of 18 square feet.

The rest of the document lists nine standards the build must meet. Minimum ceiling height, for example, must be 7 feet. And as long as there is 7 feet of standing room under a loft, one can sleep in the loft, although it must “comply with minimum opening dimensions” for emergency escape and rescue.

“We have always been of the opinion that [tiny houses] are principal dwelling structures, a permitted type of dwelling,” said Rob Walton, sitting in a nook of his jam-packed office.

Walton, chief of the county’s zoning and development services, spelled out a few things when asked about living in say, a yurt, or a reconfigured school bus.

“Zoning doesn’t allow living in RVs or buses, or anything with [license] tags, although if the RV is connected to water and sewer, and tied down, or on a permanent foundation, it can be lived in."

Electricity is optional, he said, but you do need a water sourceand a graywater disposal system. Tents over 900 feet require permits. And under 900? “You can’t live in them.”

Questions about composting toilets and recycling human manure (for the homesteaders) had to go to Environmental Health Manager Whitney Wright.

He further illuminated Fauquier County’s mindset about permitting waste systems. “Professional engineers, by code, are allowed to design systems that are outside of the box. We are happy to review them. With unconventional proposals,” he added, “basically everything comes down to the building official’s decision.”

‘Something had to give’

Jill Kanto was at the tiny house festival. This single mother of three and website designer built her own tiny house in Maryland because “something had to give.”

She couldn’t find any kind of compilation of legal tiny house sites on the internet, so she built her own at www.searchtinyhousevillages.com.

“Zoning is specific to the state and the county and even the township,” she said. “The mid-Atlantic area, in my experience, is the most difficult for living legally. Although, a new tiny house community just opened up in Lancaster, Pennsylvania,” she added. “And Asheville, North Carolina, is a mecca for tiny house villages.”

Felice Cohen was also at the tiny house show. She wrote a book about living in a 90-foot apartment in Manhattan, and of course, she’s on YouTube.

How can that even be legal, she was asked via email.