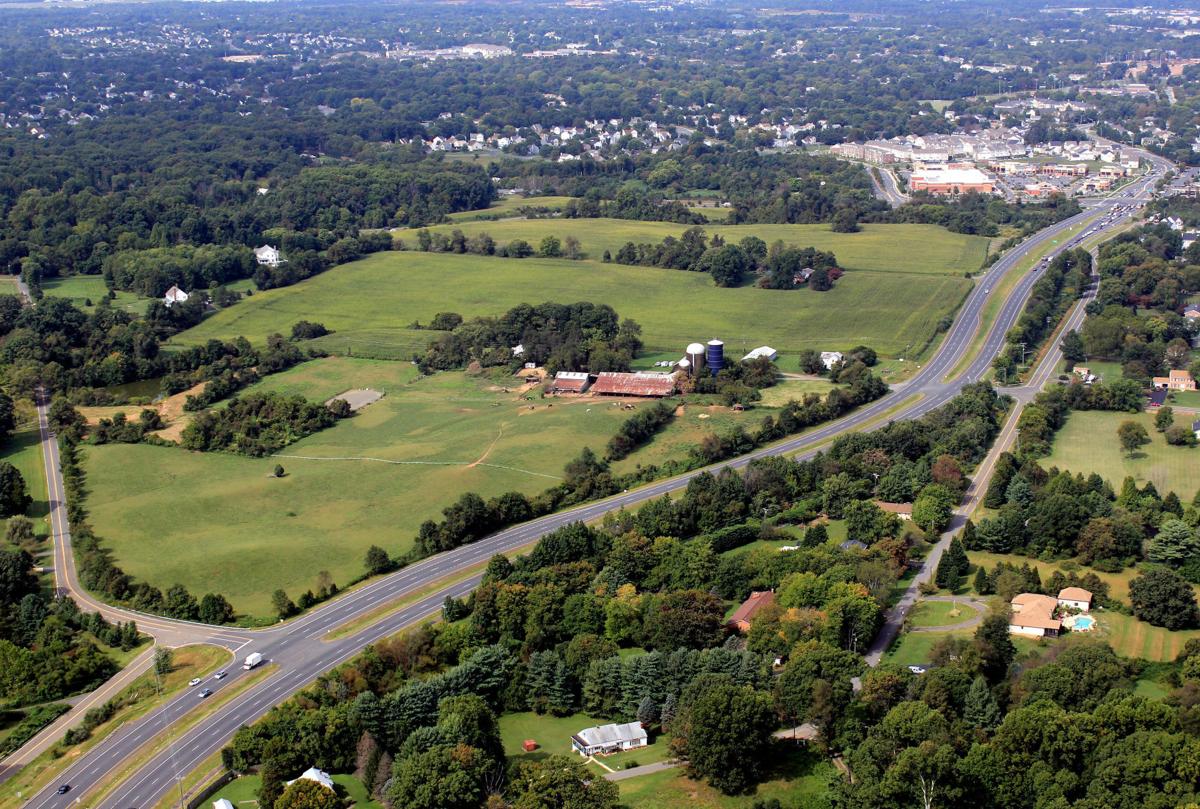 An aerial view of the Kline property outside Manassas where a developer has proposed more than 200 homes on 92 acres. The landowner has requested that the Prince William Board of County Supervisors re-designate the property for residential development through the upcoming comprehensive plan update. 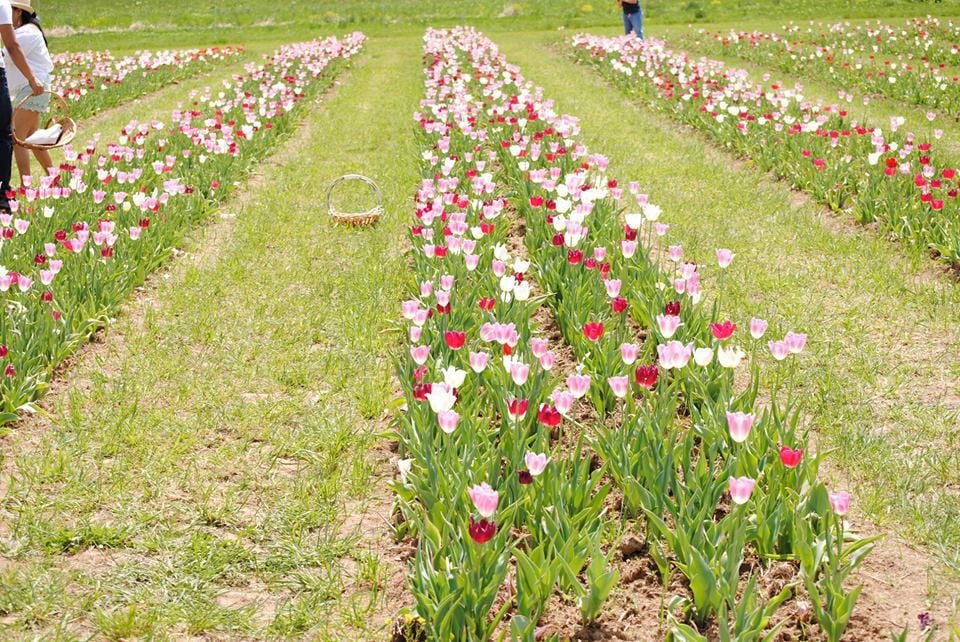 A view of the tulip fields at Burnside Farms, an agritourism pick-your-own flower farm in Nokesville.

Tucked in the rolling hills near Manassas battlefield, Brad Smith’s family has hammered out a living raising cattle for five generations. The family’s 210-acre property doesn’t look much different than when Smith’s great grandparents bought it in 1903, but Smith says the surrounding area has changed drastically as more people have moved in nearby.

“You don't feel safe going up and down the road with equipment and machinery anymore. I've actually been hit twice on a tractor,” Smith said.

Now, the family is planning to cash out, in no small part because of encroaching development. They want to sell their farm to a developer who could build up to 800 new homes on the property – but only if the county changes the underlying land-use designation to allow it. Under the current rules, only 21 homes can be built there.

“[We’re] trying to get out of here while the getting's good,” Smith said.

Smith said farming in the area has become increasingly difficult over the last two decades as the county’s population has ballooned in size, adding about 200,000 new residents since 2000. Smith said the family wants to move their operation to the Shenandoah Valley.

“People are tired... They just want out. They're tired of this area. It's not a farming community anymore,” Smith said.

Smith isn’t the only rural landowner who is looking to sell. Dozens of others are seeking similar changes to their properties as the county undergoes its first comprehensive plan update in more than a decade. In all, 35 landowners have filed land-use change applications for 1,871 acres of land, according to county documents. Taken together, the proposals could yield thousands of new residential units – and several data centers – in areas where they are not currently allowed.

More than half of the development proposals are in the county’s “rural crescent,” a designation created in 1998 that generally limits development to one home per 10 acres.

Among the landowners requesting increased housing densities are the owners of Burnside Farms and Walsh Farm in Nokesville; Kline Farm in Manassas; Smith Family Farm near Catharpin; and an assemblage of agricultural properties on Vint Hill Road near Marstellar Middle School.

Additionally, Dutch Land Farms in Nokesville, as well as 12 homeowners near Manassas Battlefield, want to allow data center development on their properties.

All the applications and a map of the proposed changes were made publicly available on the county’s website on Monday, June 21.

Land-use changes could be approved in one vote

County planners are currently reviewing the proposals to determine whether to include them in the updated comprehensive plan.

Once the staff's review is complete, the plan will head to the planning commission and board of county supervisors both of which will vote on the entire package of land use proposals later this year, a move that could jumpstart numerous developments in a single board vote.

Prince William Board of County Supervisors Chair Ann Wheeler, D-at-large, said the updated comprehensive plan will present “an opportunity for a cohesive vision for development in the county.”

“The comprehensive plan [update] is a way for the planning department to take into account the vision of the current board, as well as the market opportunities being offered to respond to our growing community. It can also respond to our need for a greater commercial tax base,” Wheeler said in a Tuesday, June 29 email.

Wheeler added that the process is more transparent than in past years. The public can view the applications on the county website, a feature that was not available during the 2008 comprehensive plan update.

During the county’s 2008 comprehensive plan update, landowners could petition the county’s Land Use Advisory Committee for land-use changes, but no formal application was required.

Mark Granville-Smith, a local developer who served on the county’s Land Use Advisory Committee in 2008, said the 2021 update is “more formal” than in the past.

“Citizens were allowed to come to the land use advisory committee [in 2008] and give notice to the committee if they felt that their parcel should actually be considered for a different use ... It was similar, but not as formalized in terms of a written application,” Granville-Smith said in an interview with Prince William Times.

Granville-Smith owns the land leased by Burnside Farms in Nokesville and is requesting land use changes on the property, which is located in the rural crescent, to allow a higher density residential development. His plan would place the land that holds Burnside Farms into conservation easement.

Some opposed to update process

The comprehensive plan update, and the county’s public map of the new proposed changes, is already facing scrutiny from some county residents.

Kim Hosen, executive director of the Prince William Conservation Alliance and a former planning commissioner, said the process will allow the land use changes to avoid both public scrutiny and a key development hurdle.

If the changes are approved in the comprehensive plan update, Hosen said the landowners applying for the changes will no longer be required to formally apply for a comprehensive plan amendment that requires each project be reviewed individually by the county, planning commission and board of county supervisors.

County officials confirmed last week that the land use changes sought by landowners, if adopted into the comprehensive plan, would relieve applicants of having to apply for formal comprehensive plan amendments. The projects would still require rezonings and special use permits, however, where needed.

The comprehensive plan's land-use chapter could head to the planning commission as soon as this month and would then move onto the board of county supervisors in late summer or fall, according to the county’s website.

Both boards will have to hold public hearings before adopting the land use chapter of the comprehensive plan, neither of which have been scheduled.

So let me get this straight...the Progressives on the BOCS will make a very very small umber of people multi millionaires while sticking it to the little family living in the Crescent.

Our votes won't matter cuz the BOCS Progressives will gain PAC dollars by the thousands.

The Pageland area will be filled with spewing truck fumes, the roads will be greatly expanded to include a 4 lane highway, the trees will be torn out, the grasses replaced with asphalt.

This Progressive board , should they go this route must turn in the Progressive business cards as they would destroy 1000s of acres and ruin 100s of families while pocketing funds from developers and the newly.minted millionaires.

Sounds.like.something the GOP would do but noooo they claim to.be Progressives but are Destroyers

It's a done deal. This will happen before the next PWC elections. 100% guaranteed. Next on the county agenda, 1,800 acres of affordable housing. The board of supervisors and the planning commission will be moving at lightning speed.