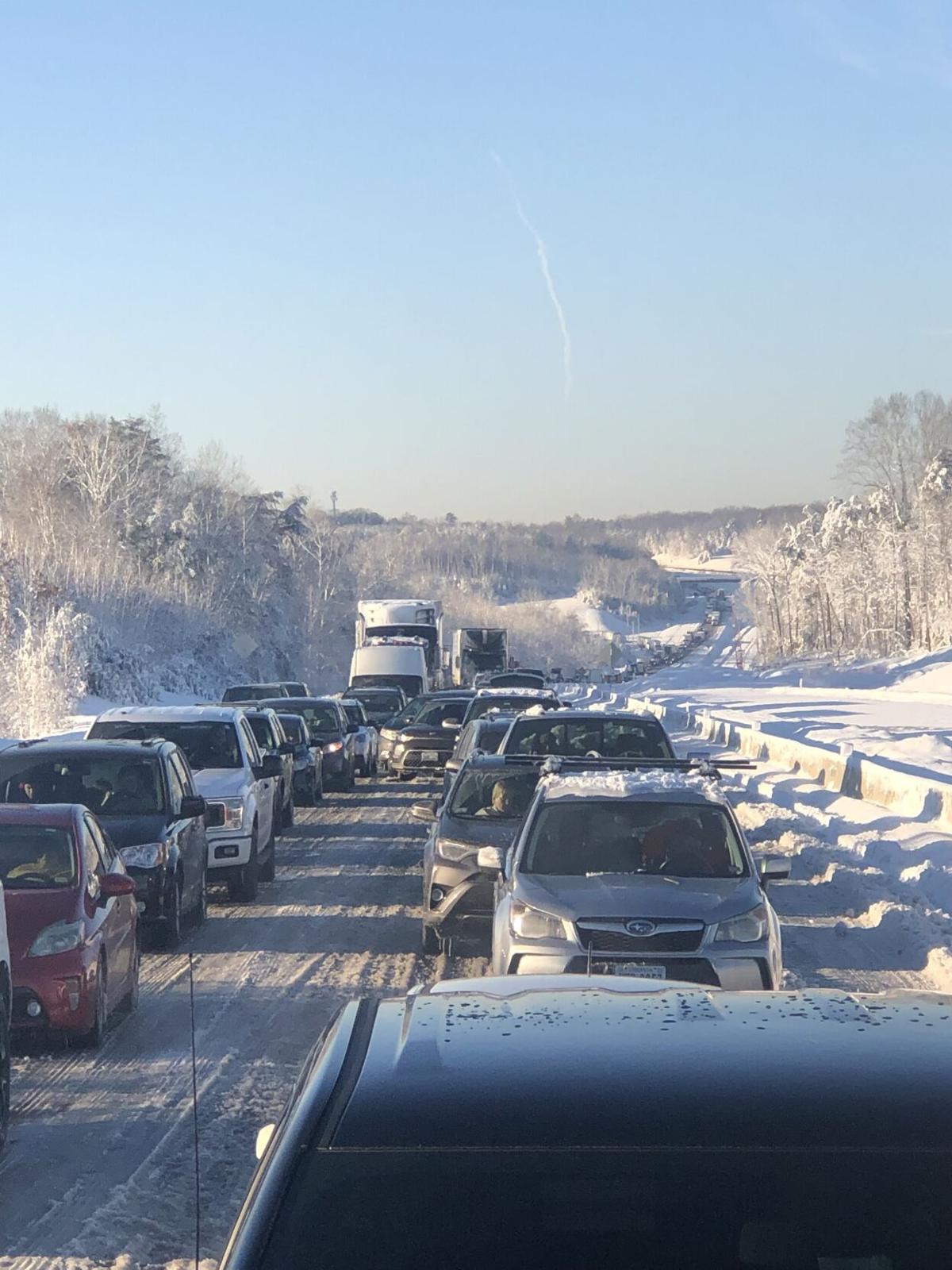 The view from Interstate 95 exit 137.8, where New York resident Alison Bradshaw was stuck in her SUV overnight  with her four children. 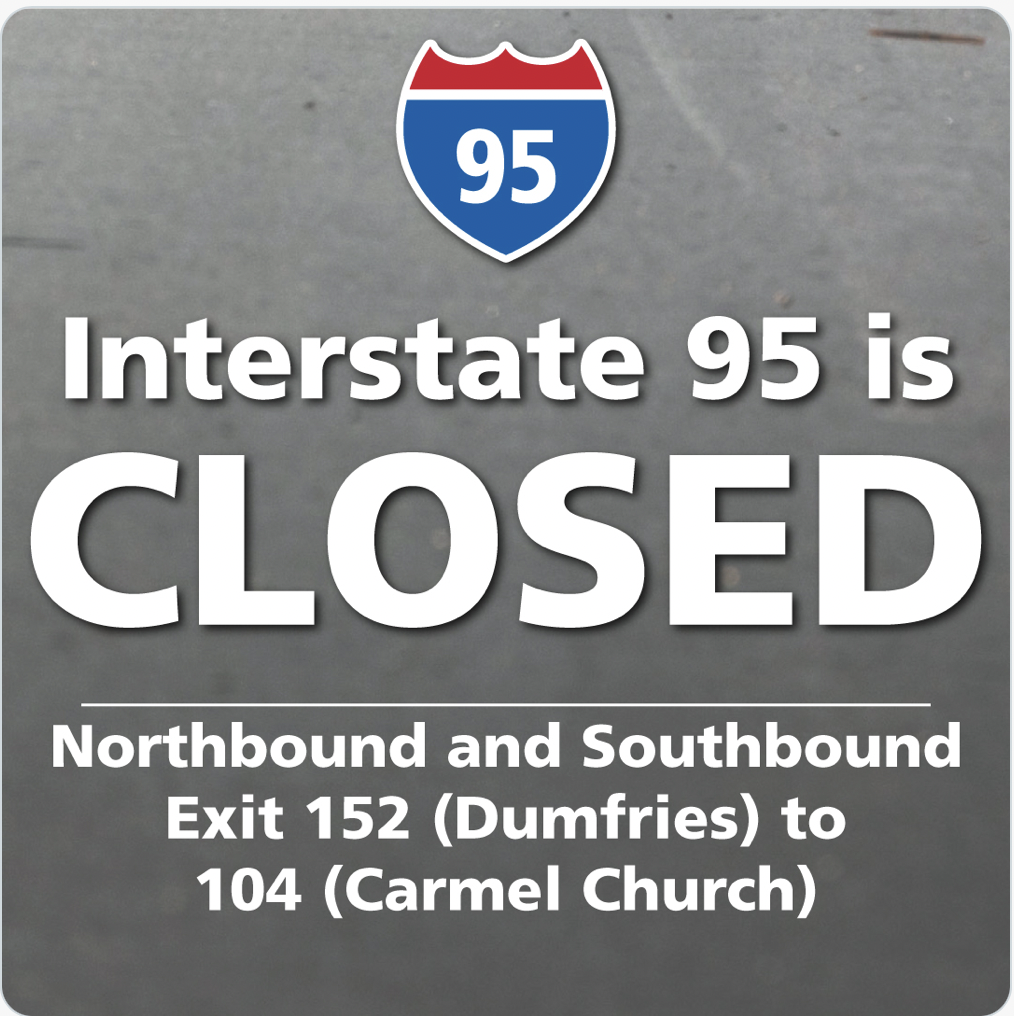 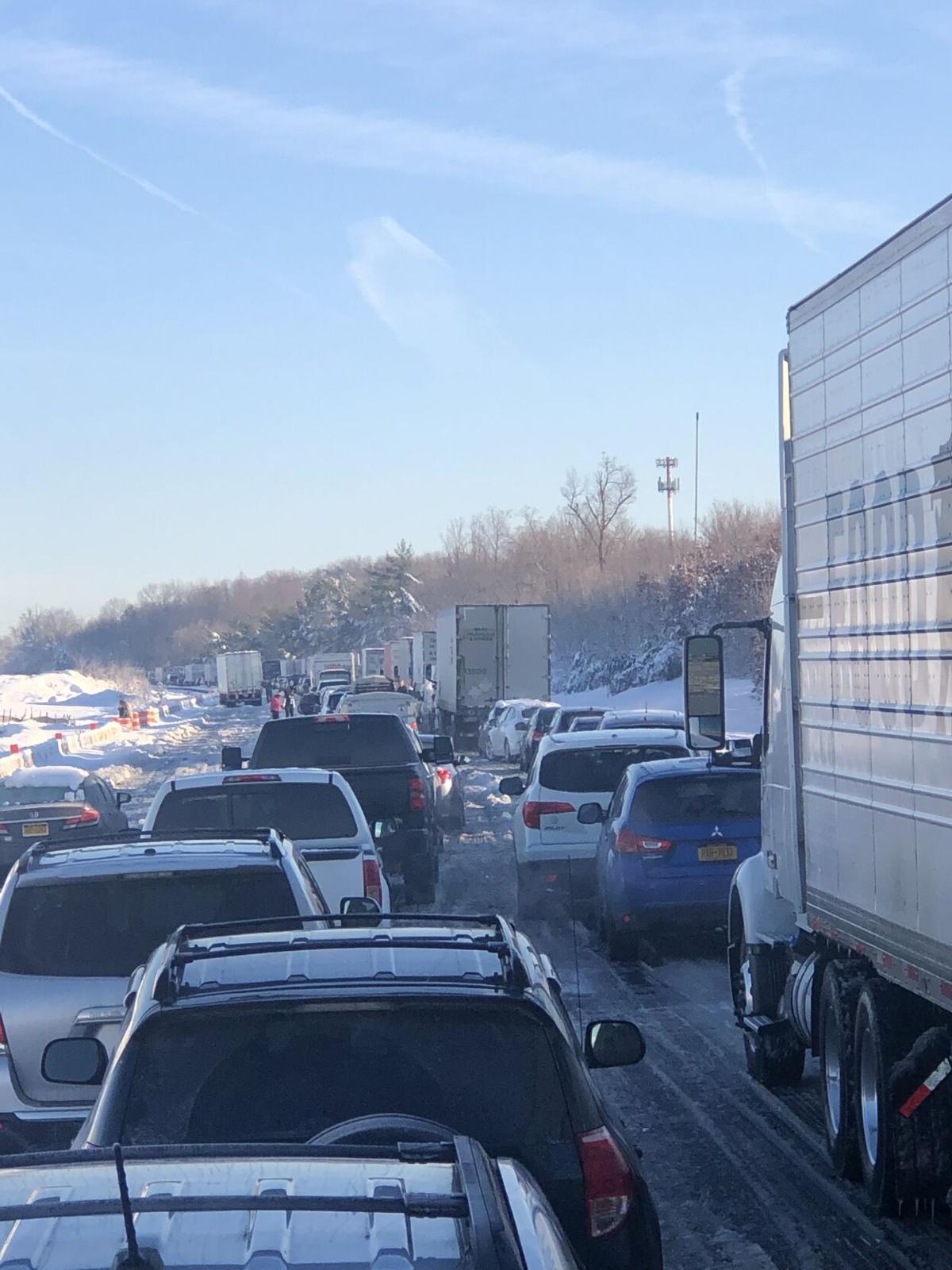 The view from Interstate 95 exit 137.8, where New York resident Alison Bradshaw was stuck in her SUV overnight  with her four children.

Stranded on Interstate 95 since about 10 p.m. Monday night, Alison Bradshaw says she has a message for Virginia officials: "We need help!"

"We need food and water. People need gas," Bradshaw said at about 8:40 a.m. Tuesday morning in an phone call from her SUV, which was stuck in traffic at the 138.5 mile marker, south of Fredericksburg.

Bradshaw, her husband and her four kids -- ages 10, 8, 5 and 4 -- had been on I-95 for about 10 hours. They pulled off the interstate briefly, on Monday night, to get something to eat. The surface roads in the area were bad, however, so they felt they had no choice but to get back on I-95.

They managed to get only about 2 miles down the road, however, before becoming stuck in a traffic standstill. The family spent the night in their Escalade, turning on the engine only periodically to reheat the car.

The family is traveling back home to New York from a holiday trip to Florida. They stopped in South Carolina on Sunday night and had heard about the storm in Virginia but didn't know how bad it would be. She said they thought the roads would be cleared by the time they reached the state.

But that was not the case. Bradshaw said they had yet to see a snowplow or any sort of emergency vehicles since becoming stranded.

Thankfully, Bradshaw said, her four kids mostly slept through the night. But they had only two bottles of water to share between them and were getting worried.

"It seems they were completely unprepared for this storm," Bradshaw said of Virginia officials. "There's no help for these people. There's no movement."

By about 9:45 a.m., the family had begun creeping forward, making it about two miles, Bradshaw said.

"There's lots of stalled trucks off to the side, but one lane of traffic is moving very slowly in the middle lane," she said. "Haven't seen any workers/crews yet."

My team has been working throughout the night alongside @VSPPIO, @VaDOT, and @VDEM to respond to the situation on I-95.

The fire department had started sending crew members down to the highway from exits in different parts of the county to hand out water, Smolsky said in a text.

It's not clear, however, what those efforts will entail. At about 9:15 a.m., VDOT sent public safety alerts to all cell phones of motorists stranded along the roadway saying: "State & locals coming ASAP with supplies & to move you."

Earlier in the morning, VDOT said plans were underway to guide vehicles to nearby interchanges, where they can access alternate routes.

Meanwhile, they continued to ask all motorists to avoid I-95 until the closing is lifted.

"As soon as additional travel lanes open, VDOT will communicate updates through 511Virginia, news releases, on social media, and on VDOT's website," the release said.

A nearly 50-mile stretch of Interstate 95 was closed in both directions Tuesday morning, as crews continued to work to remove stopped trucks, treat for icing and plow snow.

The road is closed from exit 152 at Dumfries Road to exit 104 at Carmel Church Loop. Motorists are being urged avoid the entire area, the Virginia Department of Transportation said in a news release early Tuesday morning.

VDOT officials called the situation “unprecedented” as motorists remained stuck on the highway – many overnight – in freezing temperatures.

Many took to Twitter to express their frustrations and send out pleas for help. In response, VDOT tweeted that crews “are actively working to get everyone off 95” and that plans were underway to guide vehicles currently stopped to nearby interchanges.

Several emergency vehicles are staging at I-95’s exit 150, which is near Quantico, Smolsky said.

"We know many travelers have been stuck on Interstate 95 in our region for extraordinary periods of time over the past 24 hours, in some cases since Monday morning. This is unprecedented, and we continue to steadily move stopped trucks to make progress toward restoring lanes,” Marcie Parker, P.E. VDOT Fredericksburg District engineer, said in news release.

“In addition to clearing the trucks, we are treating for snow and several inches of ice that has accumulated around them to ensure that when the lanes reopen, motorists can safely proceed to their destination," Parker said.

VDOT says motorists should avoid travel on I-95 in this area until lanes reopen and significant congestion clears the area.

"Even as travel lanes reopen, additional time will be needed to assist motorists who have been stopped for extended periods on I-95 overnight, and in some cases since Monday morning," the release said.

Plans are underway to guide vehicles currently stopped on interstate to nearby interchanges, where they can access alternate routes.

As soon as additional travel lanes open, VDOT will communicate updates through 511Virginia, news releases, on social media, and on VDOT's website.