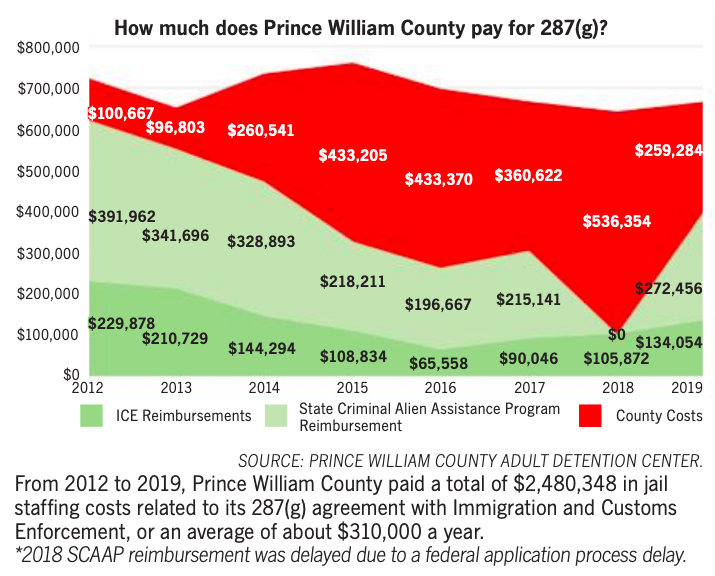 Hill renewed the county’s ICE agreement for another year effective July 1 with approval from the Prince William-Manassas Regional Jail Board. King, who currently works as a sheriff’s deputy in Fairfax County, says he plans to end the partnership if he’s elected.

The program, known as a 287(g) agreement, allows the jail to deputize its officers as ICE agents to access federal databases and issue detainers to hold inmates for 48 hours past their release date so ICE can take them into custody if it chooses.

Prince William and Culpeper counties are the only localities in Virginia that currently hold 287(g) agreements with ICE. The Prince William County Adult Detention Center has transferred 6,503 inmates to ICE custody since 2011, according to jail records obtained by the Prince William Times in a Freedom of Information Act request.

King, an Iraq war veteran and the first Democratic candidate to run for Prince William County sheriff in 16 years, says the program has become a public safety issue for the county because undocumented residents are less likely to contact local law enforcement to report criminal activity. King also contends the agreement effectively separates families who live and work in Prince William.

"Criminals embed themselves in places where people, including survivors of domestic violence and sexual assault, are afraid to report crime,” King said. “Furthermore, 287(g) increases the risk of racial profiling and has cost the county millions … Local law enforcement should focus on keeping people safe, not on tearing families apart and making people afraid to report crime.”

Hill, who has served as Prince William County’s Sheriff since 2004, has pushed back on King’s claims about the program. He says the county’s ICE agreement has helped increase public safety in the county since it was implemented in 2008 and has said he would not stop federal law enforcement officers from detaining undocumented residents.

“We use all the tools in the box to try to keep our community safe, and that’s one of them,” Hill said. “I’m quite sure that there have been people detained with ICE detainers that gave us some good information about gang activity, drug activity and human trafficking that’s going on in the county and the surrounding area.”

The two candidates have also clashed over the cost of the ICE program. Hill has said the program costs the county a very small sum of money, while King alleges the total cost to be in the millions.

The county’s ICE agreement costs the jail about $300,000 on average every year – only a small fraction of the jail’s total operating cost, according to records jail officials provided in response to the FOIA request.

The cost of the program would be much higher if it weren’t for federal reimbursements from ICE and from the State Criminal Alien Assistance Program, which cover about 60% of the costs associated with the program, records show.

The total staffing costs to implement the program between 2011 and 2019 was $6.3 million, of which $3.9 million was reimbursed by the federal government. The rest of that money, about $2.4 million, was paid for by the jail, whose operating costs are funded by Prince William County and Manassas City.

Maj. Amanda Lambert, director of support services, said staffing costs were the primary costs incurred by the jail under the 287(g) program. ICE provides jail officers with the necessary computer equipment and training to implement the 287(g) program at no cost to the jail. Hill has maintained that the amount of money needed to implement the ICE agreement is a good deal for the county.

As of 2017, about 22% of Prince William’s population is Hispanic or Latino, according to the U.S. Census Bureau.

Outgoing Board of County Supervisors Chairman Corey Stewart, R-At Large, has championed the county’s partnership with ICE and was a vocal supporter of the agreement when it first went into effect in 2008. Stewart announced in January that he would not seek re-election in 2019.

Board chairman candidates disagree on 287(g)

The four candidates running to take his place at the helm of county government are on opposite sides about the agreement.

Republican John Gray is an outspoken supporter of the county’s 287(g) agreement and wants to “maintain the removal of criminal illegal aliens” in the county by continuing to enforce the county’s ICE program. But he also said the decision to continue the agreement can only be made by the sheriff.

“We need to enforce 287(g) and we need to support the sheriff,” Gray said. “Prince William County residents have an absolute right to be safe, to enjoy their liberty and their pursuit of happiness—that is governments’ declared responsibility. The fact is, I do welcome legal immigrants and all they can do to better our community.”

Ann Wheeler, the Democratic candidate for board chairman, said she wants to ensure that no local dollars are going to the federal responsibility of immigration enforcement, and that Gray’s candid support for the ICE program amounts to “fear-mongering.”

“We need to have a comprehensive look at what we’re doing with immigration, but the belief that 287(g) has anything to do with being a ‘sanctuary county’ is just divisive rhetoric,” Wheeler said.

Independent candidate Muneer Baig, himself an immigrant from Kashmir, is staunchly opposed to continuing the county’s 287(g) agreement and opposes the separation of families in Prince William County that can result.

“I will not let ICE come into this county. Families belong together,” Baig said. “It is not something I’m going to support.”

Independent candidate Donald Scoggins said the county should obey the law but criticized the tone Stewart has used over the years to discuss the county’s agreement with ICE.

“We should follow the law but at the same time we should do it in a way that … doesn’t appear to be mean-spirited,” Scoggins said. “I think people should feel comfortable living in this county wherever they came from, but if they’re here undocumented, I’m not in favor of that.”

Inmates transferred to ICE from jail

Everywhere that these agreements have ended has resulted in death and violence caused by illegal aliens. Don't even get me started on places that are sanctuaries for illegal aliens like California, New York, Maryland, the carnage just from illegal alien drunk drivers is disturbing, let alone murder, rapes, and violence. In addition, you have these same sanctuaries releasing violent criminal illegal aliens even when ICE detainers have been obtained.

How about you show the crime stats in Virginia to back that claim up?

Did you even read this article? It reports that Prince William is one of only two Virginia counties that participate in the 287g program?

Keep the agreement with ice. If your illegal you should not be here. Go thru proper process to become legal. Maybe that democrat sheriff can take the illegals in and pay for them to be here. Why is the tax payer always on the hook for everything these beurocrats come up with. Just look at Montgomery county md. How is deteriorating. No thanks sheriff!!!

You mean the same proper process that 45 is trying to shut down?