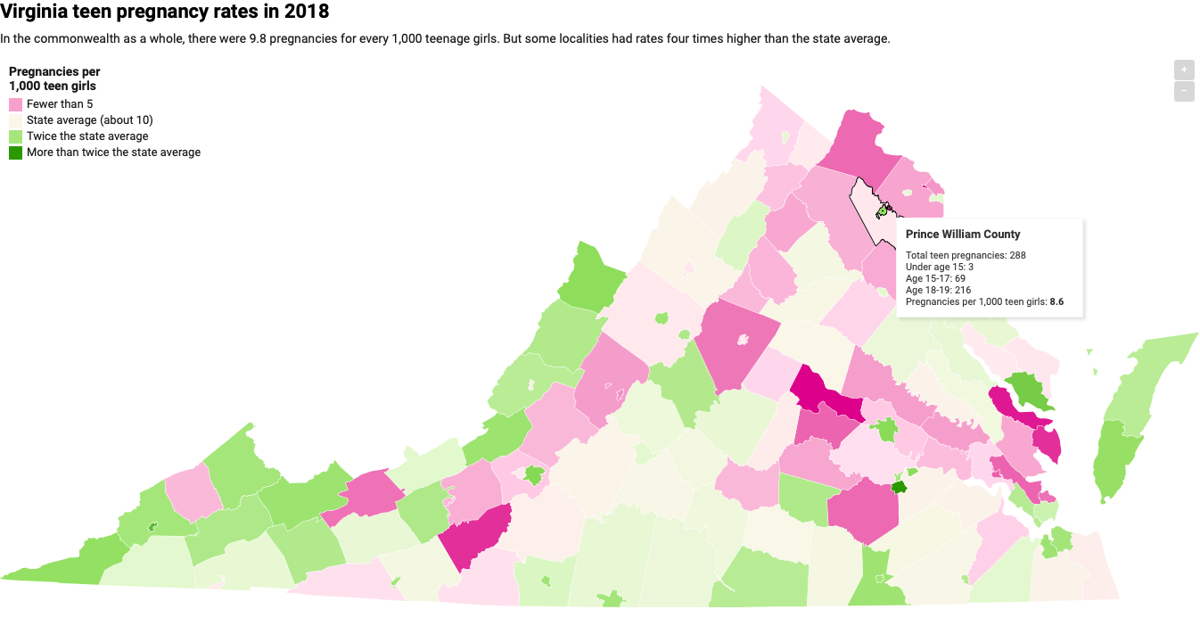 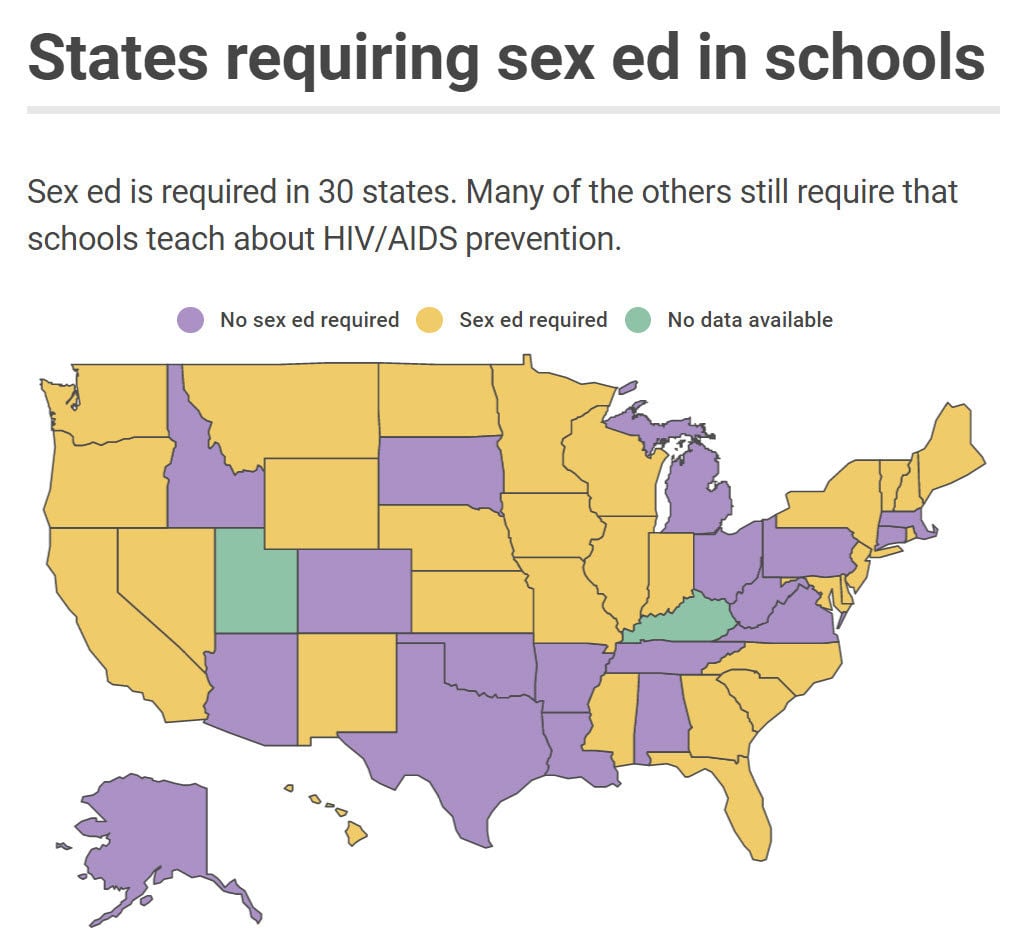 RICHMOND — In the early 2000s, Martinsville, a city of about 13,000 near the North Carolina line, had one of the highest teen pregnancy rates in Virginia. In a typical year, nearly 75 of every 1,000 teenage girls got pregnant.

More than a decade ago, the school opened a teen health clinic, which provides birth control and treats sexually transmitted infections. Since then, the city’s teen pregnancy rate has plummeted.

“It’s just been amazing because I’ve seen success,” said Beth Holyfield, the clinic’s health coordinator. “I think everybody was a little nervous about it because it was Bible belt area, you know, offering birth control for children.”

According to new data from the Virginia Department of Health, among the state’s 133 localities, Martinsville ranked 16th in teen pregnancy rates in 2018. For every 1,000 teen girls, there were about 21 pregnancies.

Within Virginia, the rates vary widely, according to data obtained by Capital News Service from the Virginia Department of Health through a Freedom of Information Act request.

The data showed the number of pregnancies for every 1,000 adolescent girls in each city and county of Virginia. That way, it’s possible to compare localities regardless of population.

Except for the city of Manassas, teen pregnancy rates across Northern Virginia were lower than the state average of about 10 pregnancies per 1,000 teen girls. In Prince William County, the teen pregnancy rate was 8.6, while it was 4.6 in Arlington County, 2.1 in Falls Church, 5.9 in Fauquier County, 3.5 in Loudoun County and 5.6 in Stafford County.

Petersburg, 30 miles south of Richmond, had the highest teen pregnancy rate in the state in 2018: about 44 pregnancies for every 1,000 teenage girls.

Sex education is optional in Virginia

Under the Virginia Standards of Learning, the state’s public school curriculum, schools in the commonwealth may teach sex education but are not required to do so. State law requires an emphasis on abstinence, but the SOL curriculum also includes recommendations for teaching about contraception and condom usage.

More than 90% of Virginia schools teach abstinence. Fewer than 40% of the state’s high schools teach contraceptive methods recommended by the CDC, according to the Sexuality Information and Education Council of the United States, or SIECUS.

Pyle said classes “include age-appropriate instruction in family living and community relationships, abstinence education, the value of postponing sexual activity, the benefits of adoption as a positive choice in the event of an unwanted pregnancy, human sexuality and human reproduction.”

Dr. Samuel Campbell, an obstetrician-gynecologist at the Virginia Physicians for Women health-care service, says pregnant teens need more than that.

Pregnant teenagers encounter a specific set of problems because of limited resources and support, Campbell said.

“They have difficulty with transportation. They frequently will seek care later because they are afraid to tell their parents (or) family. They have to continue with their schooling,” Campbell said. “And they have to deal with the social stigma of being a teen mom.”

Thirty-two states require schools to teach sex education, according to the most recent statistics from SIECUS. Eighteen states — including Virginia — do not.

There are seven types of recommended contraception: the birth control pill, patch, ring and shot; implants; intrauterine devices; and emergency contraception. In 2017, no states reported that all of their schools were teaching about all seven methods as well as how to properly use a condom.

According to SIECUS, 19 states reported more than half of school districts teaching students about a variety of contraceptive methods. Fifteen of those states had teen pregnancy rates below the national average of 18 pregnancies per every 1,000 adolescent girls.

Of the 10 states with the lowest teen pregnancy rates, eight required sex ed in all school districts. They include New Hampshire, Wisconsin and Minnesota, which had pregnancy rates under 15 per 1,000 teenage girls.

The six states with the lowest teen pregnancy rates — Massachusetts, New Hampshire, Connecticut, Vermont, New Jersey and Rhode Island — reported that three quarters of their schools taught students how to use a condom.

On the other hand, of the 10 states with the highest teen pregnancy rate, seven do not require sex ed in schools. Those states include Arkansas, Texas and Alabama.

Nationwide, 89% of school districts teach abstinence, which recommends that teens put off having sex until marriage. Many schools teach both abstinence and contraceptive methods. That is the case in New Jersey and New Hampshire, where teen pregnancy is below the national average.

“Abstinence is an excellent way to prevent pregnancy and sexually transmitted infections,” Broderick said. “But eventually, many people choose to become sexually active, and they should have accurate and complete information so they can make the best decision that fits their beliefs and values.”

Broderick says long-acting and reversible contraceptives are generally best for adolescents, but they can be hard to get.

“Access to contraception is difficult for most teenagers,” Broderick said. “Education about anatomy, physiology, contraception, sexually transmitted infections and consent is appropriate at school and at home.”

‘Educate them on the facts’ to make good decisions

The CDC’s teen pregnancy prevention guidelines say implants and intrauterine devices, or IUDs, are the most effective and reversible birth control methods. Broderick says these are more difficult to obtain than condoms or spermicide because they require a trip to the doctor and a prescription.

Dr. Natalie Dogal, an OB-GYN with Virginia Physicians for Women, said talking about contraception is important for preventing teen pregnancy. She said she discusses contraceptive options with all her teen patients.

“They tend to have heard good or bad stories from friends, parents or from reading online, and I like to educate them on the facts to help them make good contraceptive decisions,” Dogal said.

According to SIECUS, about 40% of male and female high school students nationwide report having had sexual intercourse.

Nationally, the teen pregnancy rate has decreased in recent decades. According to data from the CDC, the rates dropped by 50% from 2005 to 2017.

“Many teenagers think they are invincible,” Dogal said. “That includes thinking they will never be the one who gets pregnant or gets an STI.”

Resources for teen moms in Virginia

The Virginia Department of Health has resources for first-time teen mothers.

In the “Resource Mothers” program, a community health worker develops a supportive mentoring relationship with the teen and her family. The free resources include information about prenatal care and health care, assistance finishing school and tools to avoid drugs and alcohol. Mothers can also sign up for free text messages on prenatal and infant care.

The Healthy Teen Network has a variety of resources for teen parents across the country, including #NoTeenShame, “Mom, Dad — I’m Pregnant,” and Healthy Families America.

The U.S. Bureau of Maternal and Child Health has resources for women nationwide. The programs and initiatives include home visiting, which provides at-risk pregnant women tools for mother and child health, raising children and preventing neglect. The bureau seeks to promote child development and encourage positive parenting.

Planned Parenthood has a webpage for teens to get information about sex, puberty, pregnancy and birth control as well as a private chat function for additional questions.

For this report, we downloaded teen pregnancy rates for each state from the U.S. Centers for Disease Control and Prevention.

In addition, we needed the teen pregnancy rates for each city and county in Virginia. The Virginia Department of Health posts such data on its website; however, at the time, the most recent statistics available were for 2017.

We filed a Freedom of Information Act request with the VDH, asking for the 2018 data. The department emailed us the file we requested and then posted it online.

The VDH provided the data as PDFs. We exported the data as an Excel file and cleaned up column headings and other formatting. We have posted all of the data we obtained from the VDH and CDC.

One question we wanted to explore was whether there is a relationship between teen pregnancy rates and the sexual education curriculum taught in schools.

To examine this on the national level, we used 2017 data from the Sexuality Information and Education Council of the United States.

We compared the council’s data, which explains how comprehensive sex ed is in each state, with the pregnancy rates from the CDC.