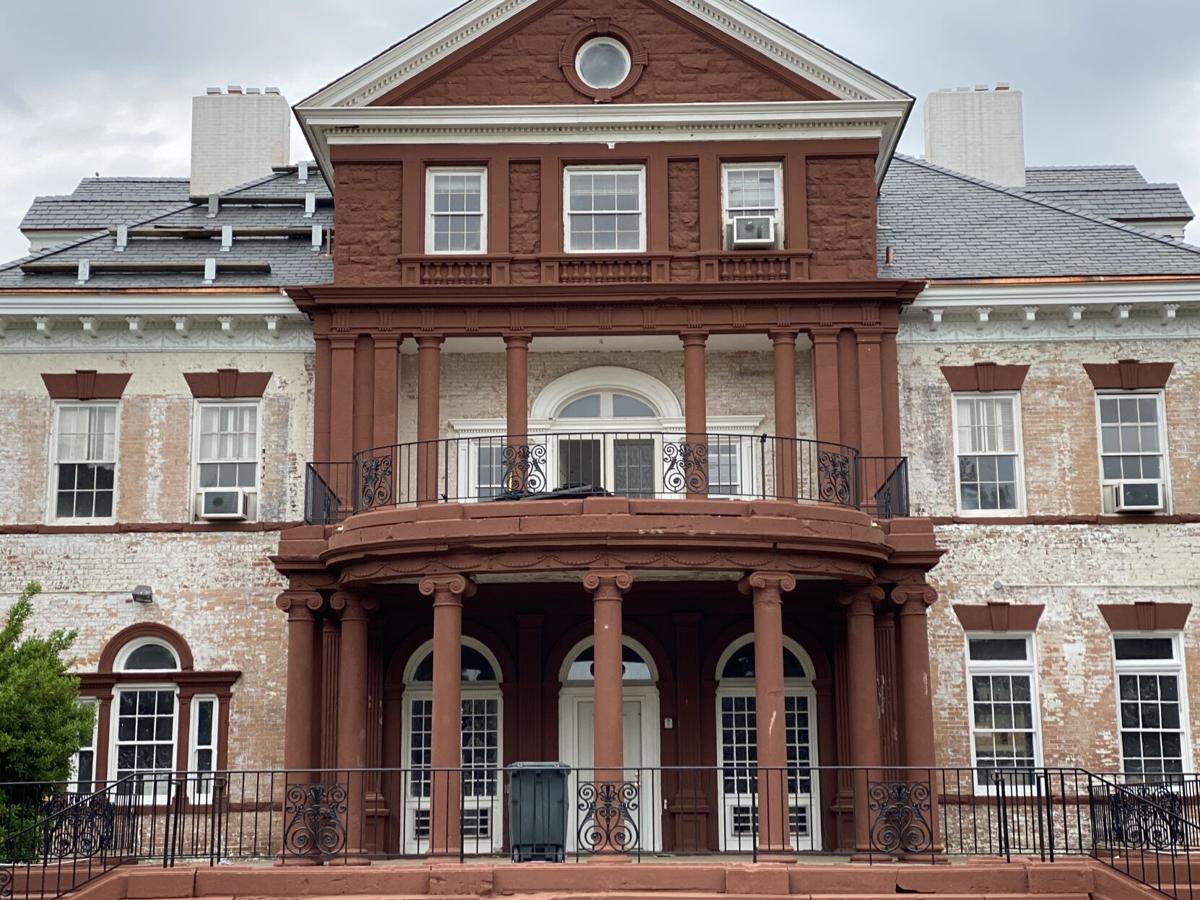 Annaburg Manor’s white paint has been stripped away as part of ongoing work to preserve the mansion, which was built in 1892.

Not always white: Annaburg Manor, built in 1892, was painted white sometime between 1964 and 1979, when it was owned by John Kennedy Sills, according to documents filed with the Virginia Department of Historic Resources.

Where is the intersection of beer, refrigeration and health care in Manassas? Why, Annaburg Manor of course. Annaburg Manor is the 35-room mansion that Alexandria brewer Robert Portner built as a country home for himself, his wife, Anna, and their 11 surviving children in 1892. Portner named his home after his wife and Annaburg Castle on the Rhine in his native Germany.

After years of deterioration due to abandonment, use as a nursing home, and then more deterioration, the City of Manassas acquired the mansion and the 3.67 acres surrounding it in 2018. Citizen input played a large part in this decision. It was unclear what would happen to the grand old structure when it was put up for sale, but area residents expressed a strong desire to save the stately old property and the city stepped up.

Now the city is moving forward with plans to stabilize the building, enhance the grounds and formulate a plan for the future of the property.

Beer originally paid for Annaburg Mansion and the surrounding estate. Robert Portner made a lager, Tivoli, which was quite popular in its time. Lagers are fermented for a longer period of time, and Portner’s benefitted from his pioneering use of refrigeration that allowed his lager to ferment and age without spoiling.

It also removed the requirement of constantly hauling block ice to his brewery from as far away as New England in the summer. His use of refrigeration in the brewery and in his train cars that carried the lager to market allowed him to both perfect his lager and expand sales of his product throughout Virginia and down into the Carolinas and Georgia. Robert Portner was ahead of his time in a number of areas, as we’ll see.

It cost about $150,000 to build Annaburg at the time, well over $4 million in today’s dollars. The Portners moved there from Washington, D.C. in 1903, and Portner died in 1906. The home was air-conditioned with Portner’s  system, one of the first home uses of home air conditioning in the country. The mansion had electric lights, also rare at the time. There was a stable, a six-car garage, a swimming pool, a stone tower, an ice house and a play house on the property.

Portner made his own wine with grapes grown on the property. He and his winemaker, Christian Xander, won awards with his wine at the Paris Exposition in 1900. There was a fenced hunting preserve, complete with a lodge and fishing lake there. This was truly one of the most beautiful and innovative estates in Northern Virginia. He won prizes with horses raised at Annaburg. He had a dairy farm there. Portner was a man of many interests, and he found time to innovate in many areas.

The Portner land was once 2,157 acres and stretched from Bull Run to Main Street in Manassas and included all of the Liberia and Yorkshire estates. The Portner family were big boosters of Manassas and held many public and private events on their property, including a luncheon for President Taft when he was in town for the Peace Jubilee in 1911 on the 50th anniversary of the Battle of Bull Run

Other Portner family members lived at Annaburg, but the last one moved out in 1924. The building was vacant from 1929 until 1947, when it was sold to I. J. Breeden, who sold off much of the surrounding property for development.

For many years the house was empty and unprotected and suffered the consequences. People would just enter the house and take what they wanted. During the scrap drives of WW II, much of the interior was stripped, particularly for copper and other metals during the scrap drives, according to documents filed with the Virginia Department of Historic Resources.

John Kennedy Sills owned Annaburg from 1964 to 1979, selling it to Prince William Hospital. Sills removed the home’s beautiful side porches and carriage area and added wings to each side of the building to create a nursing home. The mansion was painted white in this period, the VDHR documents said.

Now, the City of Manassas is removing the white latex paint that prevented the stone from breathing, trapping moisture and speeding its deterioration. A restoration firm hired by the city has already repaired the roof and taken steps to mitigate the mold issues caused by leaks.

Adding landscaping and a gazebo-like structure to the property where the foundation of the tower exists are possibilities if funding can be secured. Replacing the wrap-around side porches is also a desire of residents, according to city officials.

Some features of the original mansion that showcase the beauty of the building, such as the Italian marble mantles, still remain on the first floor of the mansion. It is hoped that at least that floor can eventually be opened for community events.

The city will hold a community conversation meeting on Saturday, May 8, from 11 a.m. to 1 p.m. More information on the draft master plan is available on the city website.

What: Learn about the draft master plan that will guide its future use and see recent exterior restoration work.

The meeting will be held outdoors; drop by anytime between 11 a.m. to 1 p.m. (In case of inclement weather, the event will be rescheduled.)