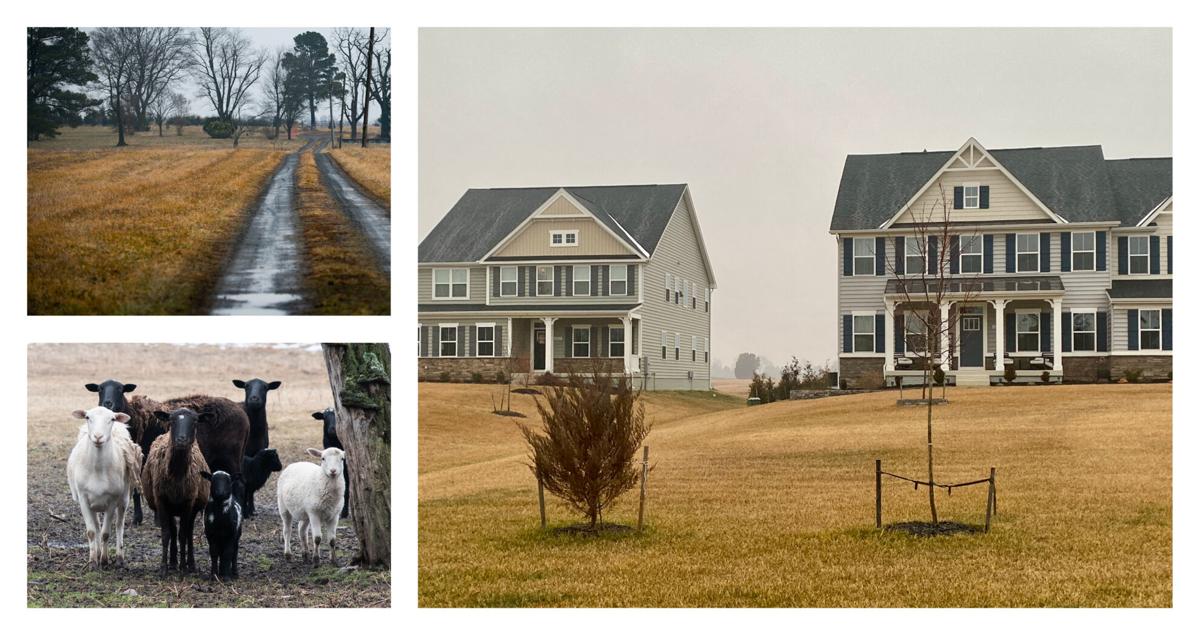 Prince William County's rural area, known as the 'rural crescent,' is home to small farms, like this one, left, on Aden Road, as well as new $700,000-plus homes built on oddly-shaped 10-acre lots. The county is considering a plan aimed at incentivizing the permanent conservation of rural land by allowing higher density development and public sewer in some parts of the rural area in exchange for placing acreage in permanent conservation easements. 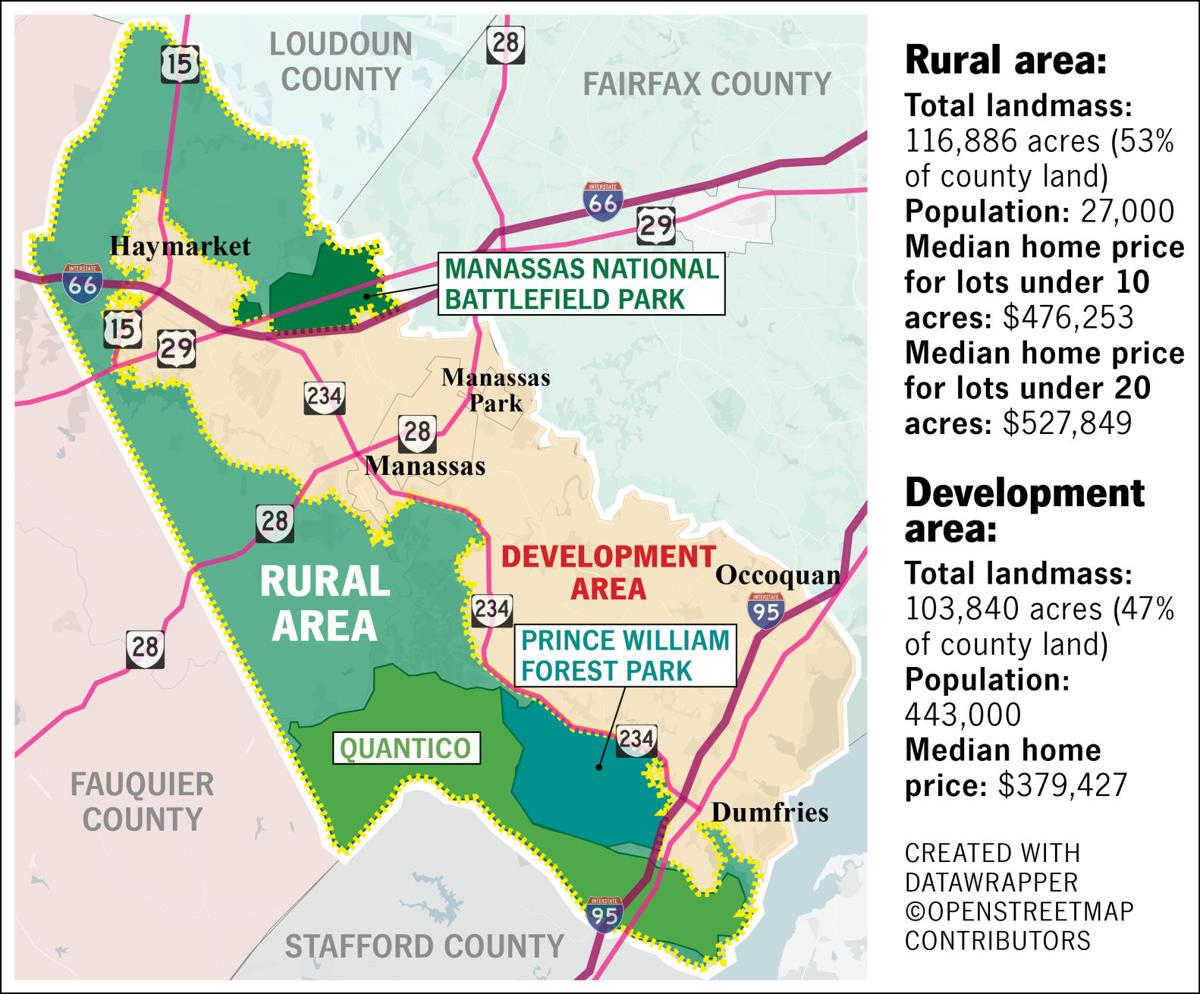 All three are recommended by county staff as a way to incentivize the permanent preservation of more rural and open space. The plan is derived from the recommendations of a rural preservation study conducted back in 2014, which has been the subject of on-and-off debate among county officials for nearly seven years.

The Prince William County Planning Commission recommended that the supervisors approve only one part of the plan: the purchase of development rights program.

A purchase of development rights program would allow landowners with more than 20 acres to voluntarily sell their properties’ development rights to the county to permanently shield land from any future development. Currently, about 18,000 acres of land in Prince William County are eligible for the program.

The purchase of development rights program is the only program to receive widespread support from both conservation groups and some local farmers. The county has not yet determined how much the program will cost or how it would pay for it.

The Prince William Conservation Alliance said in a press release last Friday that a purchase of development rights, or PDR, program is “an effective way to provide long-term protection for farmland while also providing additional funds for the farmer to reinvest into the agricultural operation.”

“The purchase of development rights program, if that were to go through, that would be a great win,” Yankey said.

The proposed transfer of development rights program and a new residential zoning designation known as “conservation residential,” which would allow higher housing densities in specific parts of the county’s designated rural area, have proved more contentious.

The development rights would be purchased by developers in exchange for the right to pursue higher-density development in receiving areas than would be allowed by right.

The TDR program is controversial because two of the proposed receiving areas are located within the county’s “rural crescent” and would allow higher density housing than is currently allowed -- up to one home per three acres with public sewer. Others receiving areas are around Potomac Mills in Woodbridge; around the Virginia Gateway shopping center in Gainesville; within Potomac Shores, outside Dumfries along the Potomac River; and around Innovation Park, outside Manassas.

The third part of the plan -- “conservation residential” zoning -- would allow residential development with densities of one home per three acres with public sewer in designated parts of  the rural area bordering the county’s “development area.” It would require developers to put 60% of a proposed development into a conservation easement while allowing the remaining 40% to be developed.

In total, the conservation residential designation as planned would allow 216 more housing units above what is currently allowed in those designated areas, according to county officials.

The Prince William Conservation Alliance is opposed to both the TDR program and the conservation residential zoning proposals.

“Extending sewer into the rural crescent to accommodate higher density is costly for taxpayers and will encourage further leapfrog development and loss of farmland, wildlife habitat, and degradation of natural resources,” the Prince William Conservation Alliance said in a press release.

Yankey, along with some retiring large-lot farmers, say they are in favor of adopting those tools. Yankey said adding programs that incentivize preservation will give the county the best shot at conserving the most amount of farmland.

“The localities that have the most tools in the toolbox for doing farmland preservation tend to be the most successful,” Yankey said.

The Prince William Board of County Supervisors are scheduled to vote on the rural preservation plan during their Tuesday, May 4 meeting at 7:30 p.m.

In the 'rural crescent' debate, some see conservation, others see exclusion

There is a line in Prince William that carves the county into two halves. On one side, there…

And don't forget the General Assembly in Richmond. I just renewed my vehicle registration online. It was $52. It included an additional $22 for the "highway use fee." If your car gets greater than 25 mpg, you're penalized with this fee. You'll discover this when you renew your vehicle registration. The Democrat-Socialists in Richmond snuck that fee in last year. BTW, I'm sure the PWC County Board will vote to develop the rural crescent. All the money in the world isn't enough for these socialists.

And my personal favorite....MORE TAXES that they arent telling you about.

Those things wont come to the area for free or by the good fairy Chair Wheeler.

Higher taxes must follow...less green will follow and more cars and buses on the road will follow.

However I do believe that the Demos have already cashed their Chamber and developer checks and will vote for explosive growth and higher taxes for us.