Prince William County was once ranked second in the country for sending people to death row. Now, the county’s Commonwealth’s Attorney Amy Ashworth and 11 other Virginia commonwealth’s attorneys are calling for an end to the death penalty in Virginia.

The Virginia Progressive Prosecutors for Justice, a group of commonwealth’s attorneys who advocate for criminal justice reforms, published a letter to General Assembly leaders on Monday outlining the reforms they’re supporting for in the upcoming legislative session, which begins on Jan. 13. 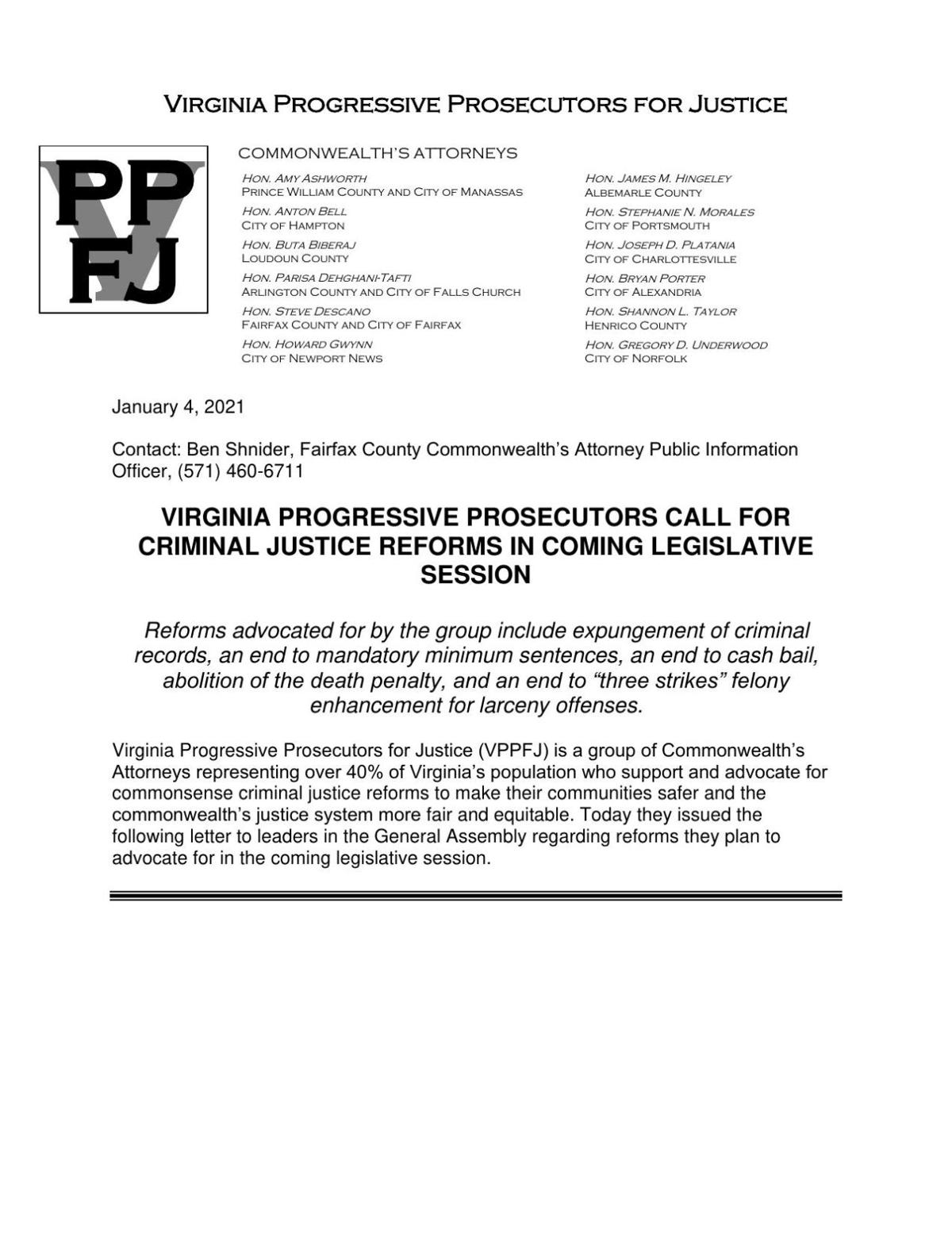 “The death penalty is unjust, racially biased, and ineffective at deterring crime,” the letter said. “We have more equitable and effective means of keeping our communities safe and addressing society’s most heinous crimes. It is past time for Virginia to end this antiquated practice.”

The group includes the commonwealth’s attorneys from the counties of Prince William, Loudoun, Fairfax, Arlington, Henrico and Albemarle, and the cities of Alexandria, Charlottesville, Norfolk, Hampton, Portsmouth and Newport News. Together, the group says they represent about 40% of Virginia’s 8.5 million residents.

In addition to abolishing the death penalty, the group is also advocating to end cash bail, mandatory sentences and the “three strikes” felony enhancement for larceny offenses. They’re also calling for the automatic expungement of criminal records once offenders have completed their sentences.

Ashworth, who was elected commonwealth’s attorney in 2019, has been vocal about her opposition to the death penalty. She said in an email Monday, that while it is legal in Virginia, she remains “morally opposed to it.”

“It is clear to me that this policy, like many policies involving criminal justice, disproportionately affects low-income individuals and people of color. Furthermore, repeated studies have shown it does not deter future criminal activity, which is a frequently cited justification,” Ashworth said.

More than 1,500 people have been executed in the United States since 1976. Virginia ranks second in the nation for executions with 113 executions, behind only Texas. There are currently two people on death row in Virginia.

Nationwide, the death penalty has disproportionately impacted African Americans. African Americans account for 34% of all executions while making up only 13% of the country’s population, according to the Death Penalty Information Center.

Ashworth noted that “the government sanctioned killing of a person who no longer poses an imminent threat to anyone” is also a costly process that could be better spent on crime prevention and deterrence. The state currently operates four capital defender offices that represent poor people charged with capital murder and facing the death penalty.

“The prosecution of these cases costs taxpayers hundreds of thousands to millions of dollars, money that I suggest would be better spent on more effective strategies for preventing and deterring crime, which I wholeheartedly support,” Ashworth said.

Prince William County was once notorious for its frequent use of the death penalty. Former county commonwealth’s attorney Paul Ebert, who served from 1968 until 2019, sent more killers to death row than any other prosecutor in Virginia.

In 2013, the county was ranked in the top 2% of jurisdictions responsible for most of the executions that have taken place in the United States since 1976.

Del. Lee Carter, D-50th, and state Sen. Scott Surovell, D-36th, both of whom represent parts of the Prince William County, introduced bills in the 2020 General Assembly session to ban the death penalty in Virginia. But both bills were killed.

Carter, who is running for Virginia governor and for re-election in the 50th district, has re-introduced his bill ahead of the 2021 meeting of the General Assembly.

Amy Ashworth, the death penalty IS for no other reason than JUSTICE for the victim who is DEAD at the hands of the convicted murderer.

How can you be in the leadership position you have with that kind of stinking thinking?

Oh, yeah. The others that have the same stinking thinking put you there...

" Woe to those who call evil good and good evil, who put darkness for light and light for darkness, who put bitter for sweet and sweet for bitter."

what is wrong with people jesus

The death penalty is not a deterrent. It is justice for someone who committed a capital crime. What they should do is find a way to speed up the process once the convicted person was sentenced. Waiting on death row for decades is inexcusable and a waste of tax payer money.