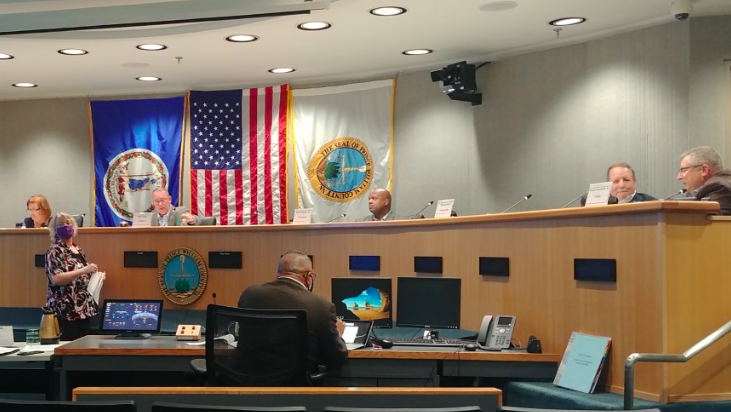 The Prince William County Planning Commission voted early Thursday to recommend the supervisors deny a rezoning for the 118-home development, "The Preserve at Long Branch." 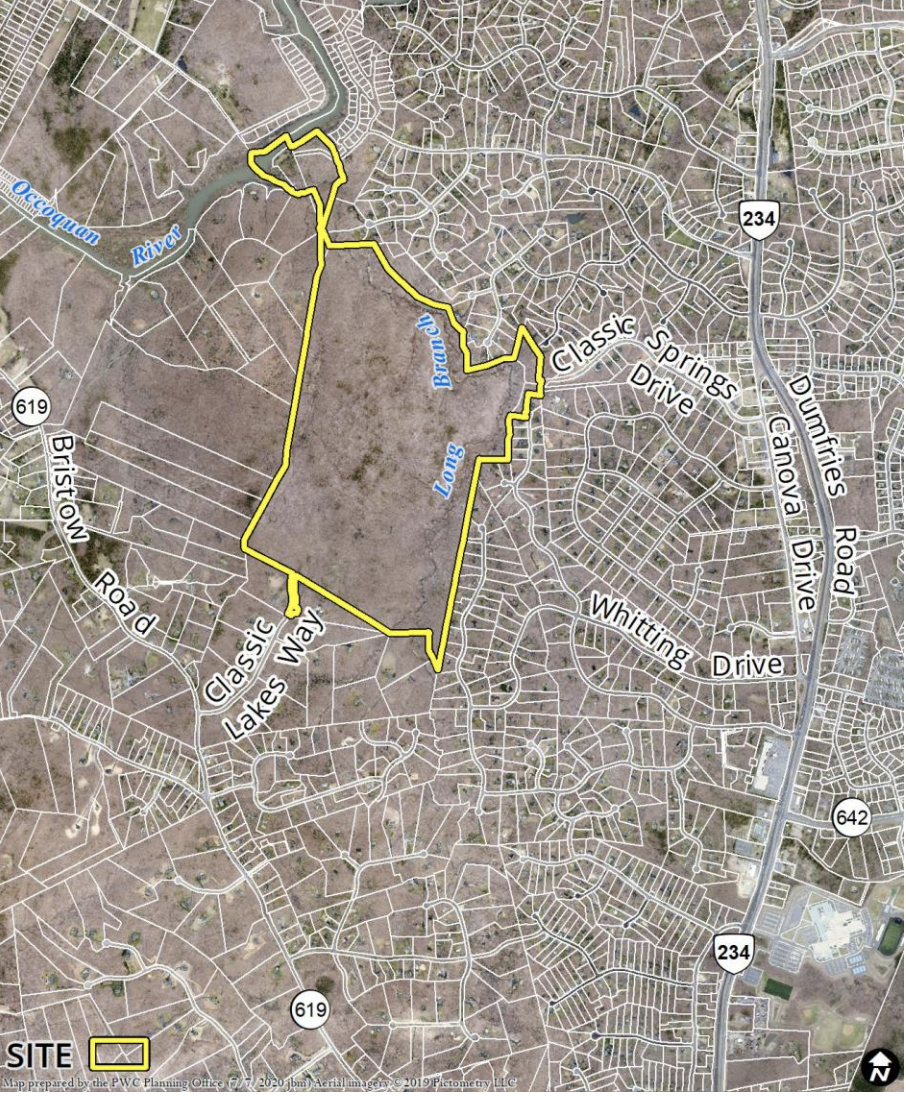 A map of the proposed "The Preserve at Long Branch," a 118-home development that would be located between Va. 234 and Bristow Road in an area of the county's "rural crescent."

The Prince William County Planning Commission voted early Thursday against a comprehensive plan amendment and rezoning application for “The Preserve at Long Branch,” a 118-home development proposed for the county’s designated rural area.

Developer Mark Granville-Smith proposes to remove 166 acres from the county’s designated rural area, known as the “rural crescent” to rezone the land to allow for construction of 118 homes on lots of between one and four acres.

The county’s current rural area policy allows only one home per 10 acres in the designated rural area. Without the proposed comprehensive plan amendment and rezoning approval, only 31 homes are currently permitted to be built on the 339-acre property.

The project also includes plans to give 175 undeveloped acres of the property to Prince William County to be utilized as public parkland with a trail and non-motorized boat access to the Occoquan River.

Commissioners rejected both the comprehensive plan amendment and the rezoning application for the property, both of which are necessary to move the project forward. The commission voted 6-1 with one abstention to recommend denial of the comprehensive plan amendment, and 7-0 with one abstention to recommend the denial of the rezoning application.

The Prince William Board of County Supervisors will have the final say on the project. A hearing before the board has not yet been set.

Dozens of residents who live in the area of the proposed development urged commissioners to deny the project Wednesday evening, citing concerns about increased traffic in the area and impacts to the existing sewer system in nearby neighborhoods.

County staff estimated the new development would add as many as 1,200 daily vehicle trips on nearby roads and would require a sewer line to be extended into the rural area, which is not allowed under the property’s current zoning.

Chris Dorces, a Coles District resident, said his family lives in a house at the edge of the proposed development and would be impacted by traffic from the 118-home development.

“We are probably one of the most affected families by this plan. We live on the very last house on Classic Springs Road. When we originally purchased our home, we purchased it for the quiet, plain, small neighborhood we have. If you add 1,200 trips to our street that would be gone,” Dorces said.

Peter Rodford, a Coles District resident, said he is concerned that introducing sewer into the rural area would “set the precedent for opening the rural crescent to more development.” Rodford said the development would be “detrimental to an already stressed infrastructure.”

Many residents also expressed skepticism about whether a new park is needed in the area. Lorrie Finn, a Coles resident, said there are already several parks nearby, including Prince William Forest Park and Doves Landing, both which are within a few miles of the new development.

“The tradeoff for the park is just another effort to unload the undevelopable land,” Finn said. “The proposed park has limited public access. There aren’t any amenities provided, not even a restroom.”

Kim Hosen, executive director of the Prince William Conservation Alliance, also opposed the project. Hosen questioned the need for a new park, saying that more than half of the land proposed to become a park is “already protected by local, state and federal rules.”

“While the green open space would provide a great amenity for people who live in the new community, it has little public value,” Hosen said.

“For every dollar we spend expanding roads and schools into the countryside, that’s a dollar we can’t spend to create attractive sustainable communities near transit,” Hosen said.

Some residents spoke in favor of the development and the accompanying proposal for a new county park. Jim Hollis, a former member of the Prince William County Trails and Blueways Council, said he owns a parcel of land adjacent to the proposed development and is in favor of adding more parkland to the area.

“This will provide two-and-a-half miles of trails and water access,” Hollis said. “Water access is precious, and that’s a huge deficit in the county inventory … This a unique opportunity.”

Commissioner Joe Fontanella (Coles) led the opposition to the development. Fontanella said the approval of the comprehensive plan amendment to remove land from the rural area would “undercut one of the county’s most unique and successful land use tools that has played a key role protecting citizens the most negative impacts of sprawl.”

After the commission voted to recommend that supervisors reject a comprehensive plan amendment to remove the property from the rural area, Fontanella moved to deny the associated rezoning because the extension of sewer “would not be consistent with the comprehensive plan’s sewer policy.”

Commissioner Patty McKay (Brentsville) said the development would be better suited for the county’s development area, but is “not meant to be in the rural crescent.” However, McKay said she would welcome a cluster development on the property that fits within in the current rules.

“With our current land use regulations today, this is grossly inconsistent,” McKay said. “This is not worth destroying any of the rural area.”

UPDATED: 102-home development proposed for the rural crescent on hold for now

....most unique and successful land use tools.........? Seriously? LMFAO!!! Only someone who doesn't understand land use would say that. How do these people get these jobs?

The arrogance of the developers never ceases to amaze me.

From their covert effort in trying to slip one by us all with the latest BOC mtg to this effort.

LEAVE the Crescent alone, as is, too bad if you cover thy neighbors property.

Keep the candles nose from the tent.

You need to have a word with the makers of your auto-correct software :) You shall not cover they neighbors candle with your tent... I agree about the crescent though.