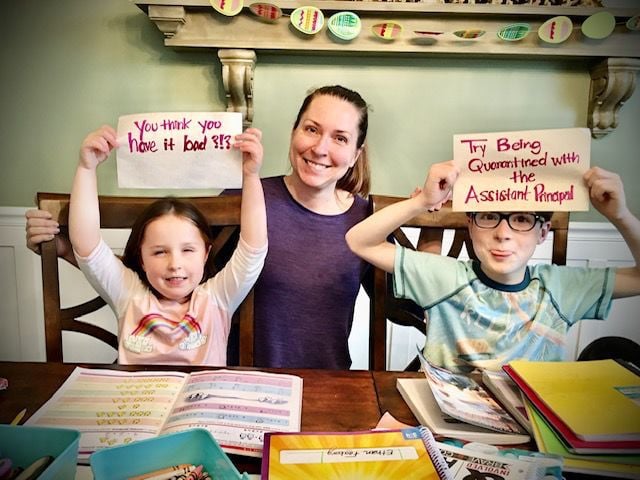 Ashley Faaborg, an assistant principal at Weems Elementary School, with her two children, Eleanor, 5, and Ethan, 9. 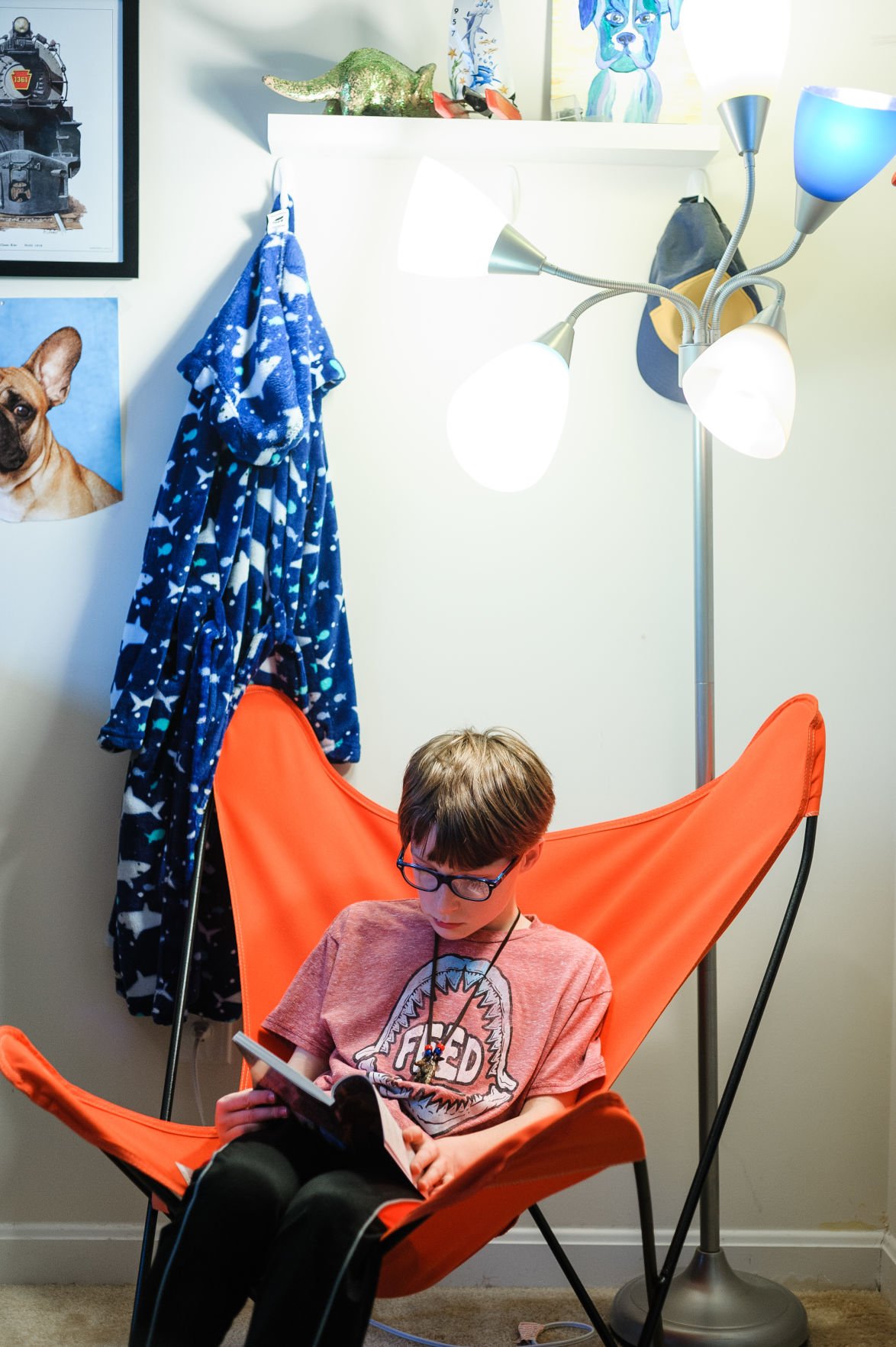 Ethan Faaborg reads in his room. 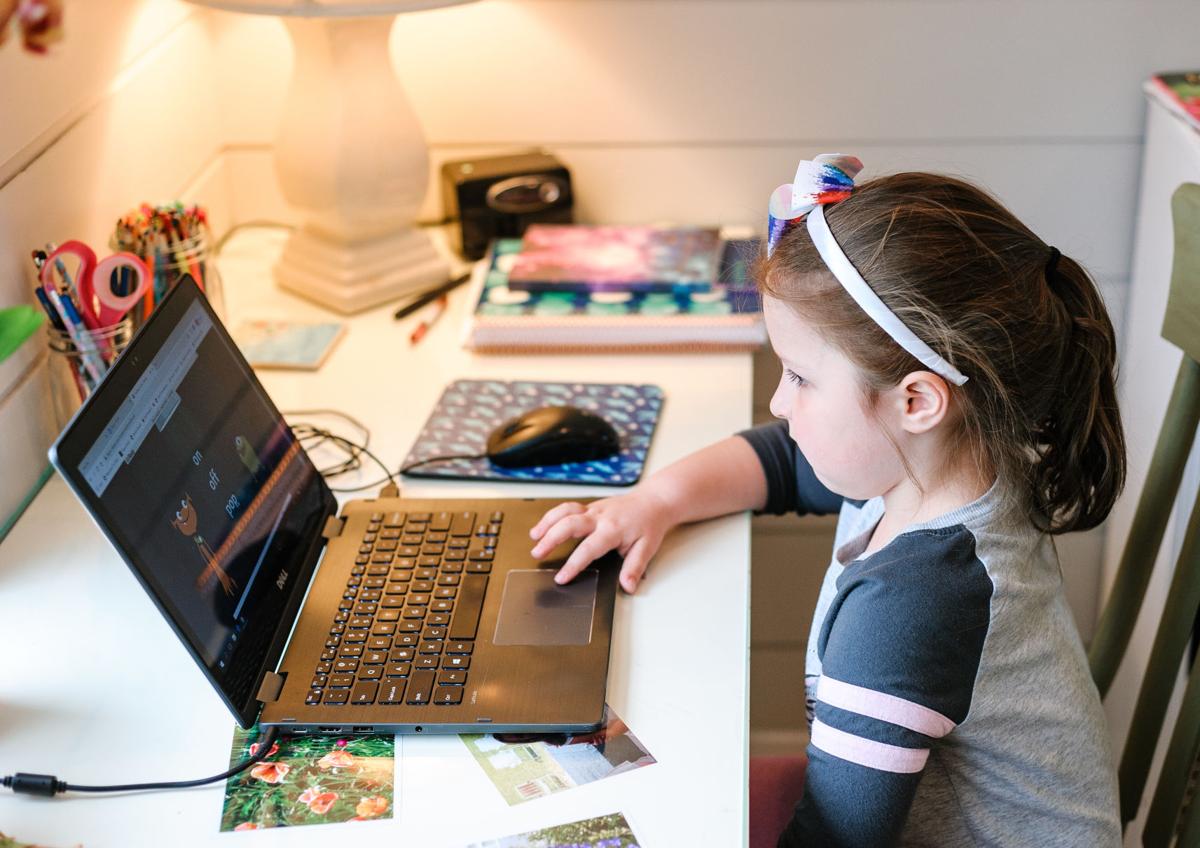 Eleanor Faaborg, 5, works on an educational program on a laptop computer in her home’s activity room. The lesson for the day was about the letter O. 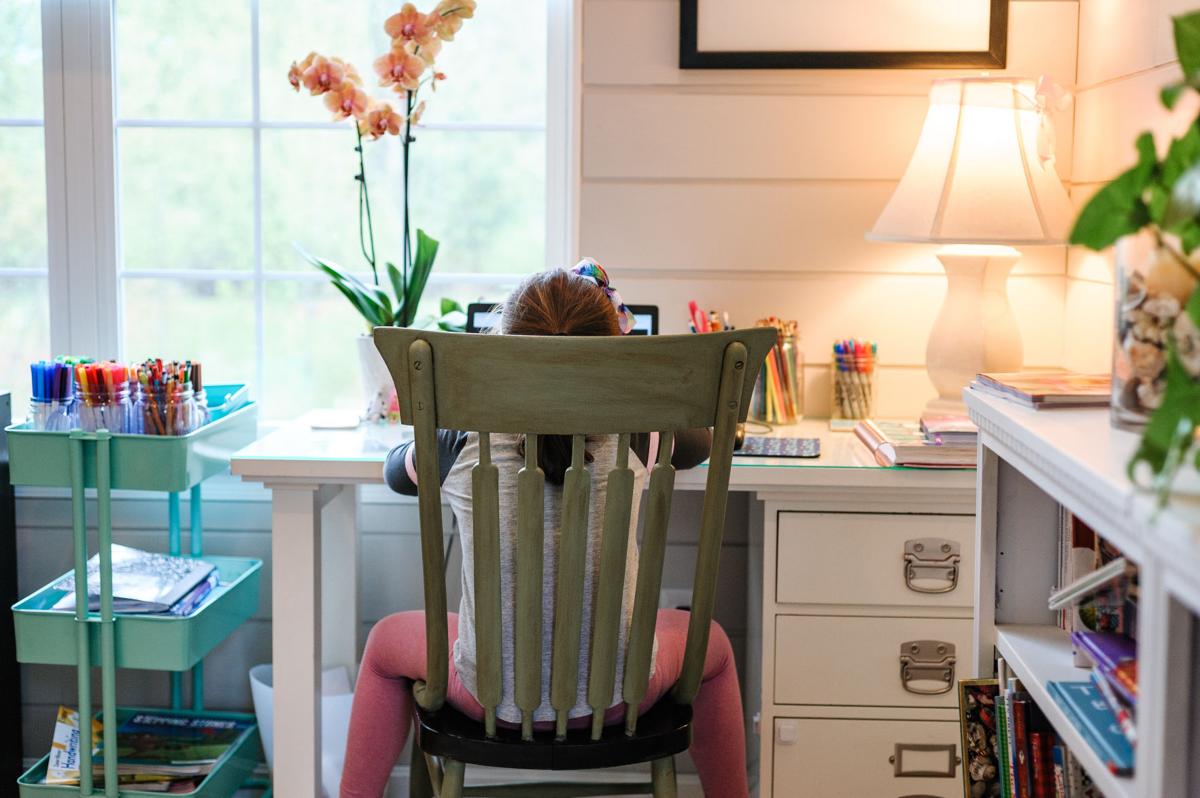 Eleanor Faaborg works on an educational program on a laptop computer in her home’s activity room. 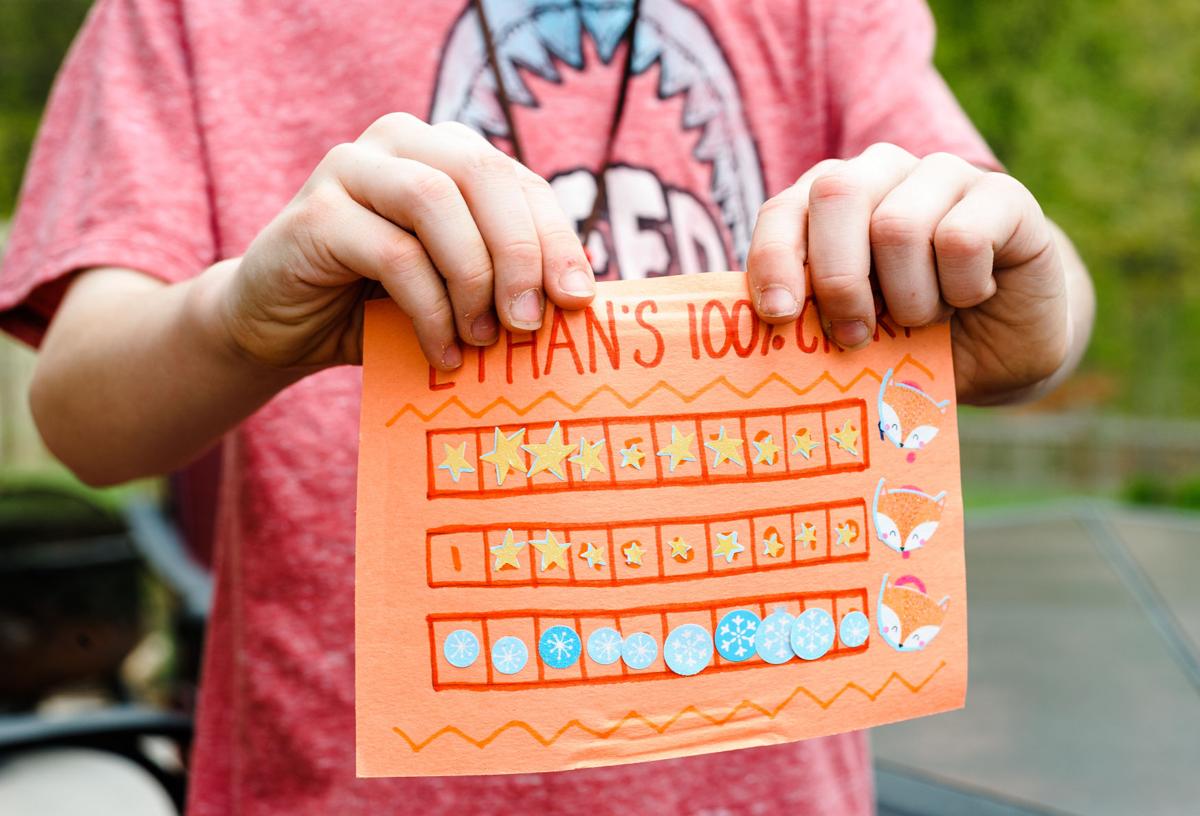 Ethan Faaborg holds up his completed star chart. He gets a star for finishing academic goals. Every 10 stars earns a reward. 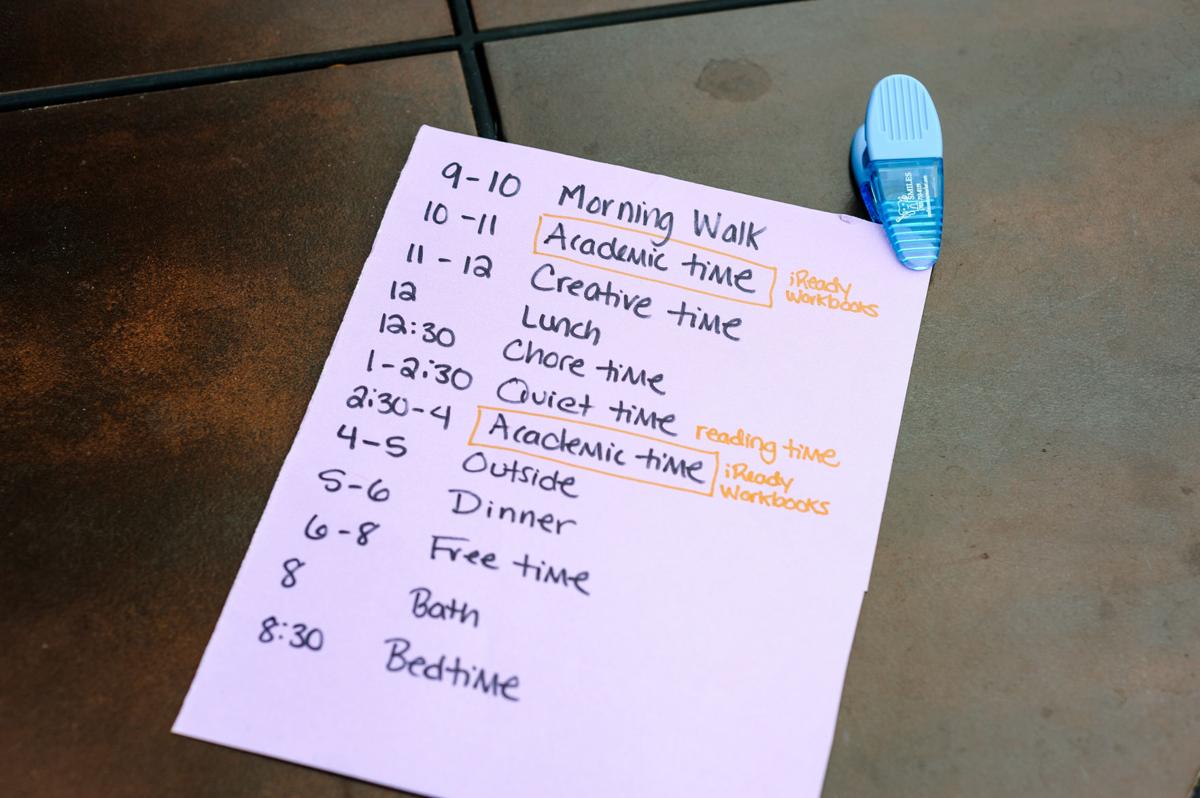 Ashley Faaborg is an elementary school assistant principal, so she knows a thing or two about creating an environment conducive to learning.

Since the beginning of the pandemic, she has worked from home and tried to create a structure and routine for her two young children, Ethan and Eleanor, and husband, Paul, as they navigate a new reality at their home in a Warrenton subdivision.

Ethan, 9, who is in third grade, and Eleanor, 5, a kindergartener, both attend Weems Elementary in Manassas where their mom works.

Getting them motivated to do their assigned classwork – about an hour a day – and other enriching activities has sometimes been a challenge, said Ashley Faaborg, but it’s been manageable overall.

Especially for Ethan, she said, having a goal, accomplishing that goal and earning something for it is important.

When the schools closed, “I went to Walmart and I just bought a bunch of cheap prizes,” she said. She has a star system – 10 stars and you get a prize – to help the kids stay engaged in their progress, and they try to stick to the daily schedule that is posted on the refrigerator.

Ethan is an early riser, and he loves to play Minecraft. If he reads an hour at night, he can play an hour of Minecraft the next morning.

“That’s been a big motivator for him,” Faaborg said. He’s read six chapter-books so far during the school closures – the “I Survived” series is his favorite right now – earning him some Minecraft time in the mornings.

Faaborg said that Eleanor is motivated more by relationships – it’s important for Eleanor to show her teacher that she is finishing assignments and understanding material.

After the kids work on reading and math assignments in the mornings, Faaborg said she tries to have a different arts and craft project for the kids to look forward to.

“When I found out all this was happening, I was like, ‘Oh my gosh, I need more arts and crafts!’” she said. The craft projects don’t have to be elaborate or significantly different every day, just different enough to keep things fresh and interesting.

Especially when the weather is nice, the kids spend most of their days playing outside in the fenced-in backyard, Faaborg said, with occasional breaks for a television show or another activity. Sometimes they watch a movie as a family after Dad gets home.

Surprisingly, she said, the amount of time the kids spend in front of a screen has reduced since schools closed, since the kids have more energy for other activities than they did after seven hours of classroom time.

Plus, she said, the kids have become closer as siblings, incorporating each other into their respective worlds in ways that they didn’t before schools closed.

“They’ll go play for half an hour – I feel like that didn’t happen before,” she said.

In the end, the most important thing has been establishing a structure to each day. Ethan has a specific chair in his room where he reads each night. Eleanor always watches instructional material at the same laptop at a specific desk in their home’s activity room.

“The biggest thing has been just having a routine,” Faaborg said. “People just need a routine. They need to feel secure.”