Photographed in 1950, the barracks could accommodate 1,000 enlisted men. Seen in the background at left are some of the four-unit officers’ quarters built in 1947.

The apartments in the proposed Vint Hill Lofts will be similar in design to those in the Imperial Lofts project in South Boston, Virginia, completed by Echelon Resources Inc. last year. 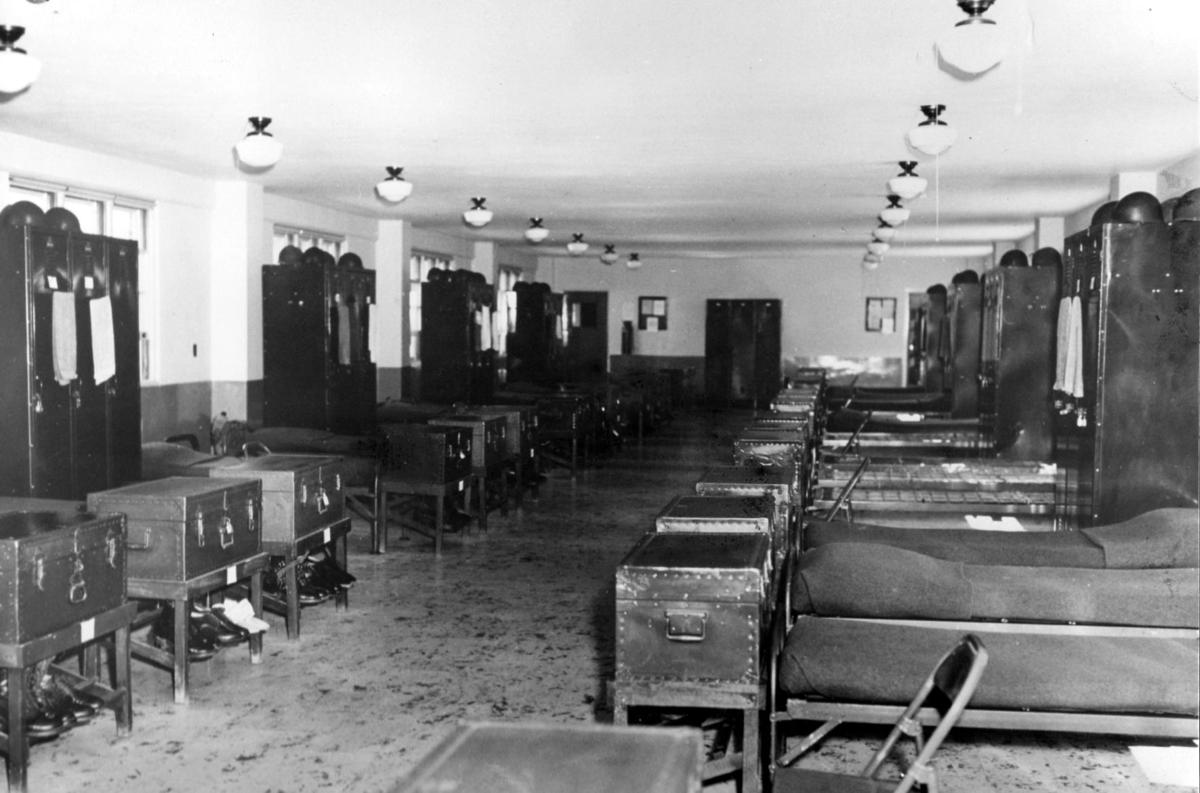 The interior of the men’s barracks in 1952 was typical military, with foot lockers, boots, cots, wall lockers with helmets lined up on top – ready for inspection.

Photographed in 1950, the barracks could accommodate 1,000 enlisted men. Seen in the background at left are some of the four-unit officers’ quarters built in 1947.

The apartments in the proposed Vint Hill Lofts will be similar in design to those in the Imperial Lofts project in South Boston, Virginia, completed by Echelon Resources Inc. last year.

The interior of the men’s barracks in 1952 was typical military, with foot lockers, boots, cots, wall lockers with helmets lined up on top – ready for inspection.

Recently announced plans to renovate the large brick barracks buildings at Vint Hill into apartments by Echelon Resources Inc. of Richmond recall the scope of the original project, which began more than 72 years ago.

Vint Hill Farms Station was established by the U.S. Army in 1942, and initially, some of the existing housing and agricultural buildings on the farm were put to use.

Soon, a number of “temporary” military-specification buildings were erected – one- and two-story wooden structures with wood or concrete floors and composition roofs.

Due to its critical role in World War II, Vint Hill Farms was designated a permanent military base in early 1947. But by then, facilities on the post, especially classrooms and housing, were greatly overcrowded.

As part of a long-range development plan, two projects were started -- totaling almost $1.4 million -- that would greatly expand the facilities at the base.

Blackwell Engineering of Warrenton was awarded a $400,000 contract to construct recreation facilities, including the gymnasium, and seven units of officers’ quarters with four apartments to each unit. Ground was broken in late July 1947.

Later, it was announced that a contract totaling $948,000 had been awarded to the Laburnum Construction Co. of Richmond to build barracks and mess hall facilities that would accommodate 1,000 men.

Final cost of this project was $1,040,101 (in 1947 dollars). According to Col. John H. Featherston of the Virginia Military District, the barracks would be “…two stories high, 29 feet wide, and of the new type developed by the Corps of Engineers.”

The barracks were completed in 1949. In 1951, a T-shaped addition was built on the east side of the kitchen to accommodate all of the personnel on the post. To meet changing personnel needs in the 1960s, a three-story barracks for enlisted women was built west of the men’s barracks.

Vint Hill Farms Station was a U.S. Army post that gathered intelligence during World War II and researched and developed intelligence equipment during the Cold War. The post was closed in 1997. Fauquier County designated the post an economic development area.

After the base closed, the barracks fell into disrepair and were vandalized. To stop trespassers, a chain-link fence was installed around the complex and the windows and exterior doors were boarded up.

Pending final approvals – starting with a zoning text amendment that would enable Echelon Resources Inc. to redevelop the buildings for rental units and later, condominiums – the company will commence design and construction planning, which must be approved by the Virginia Department of Historic Resources and the U.S. National Park Service.

“It has been 22 years since the military’s Vint Hill Farms Listening Post #1 closed and these abandoned buildings are a blight to the area and have attracted vandals. With the rehabilitation and reuse, the old barracks will offer working professionals an upscale market rate housing opportunity and the old barracks buildings will be an asset to the neighborhood,” Edwin Gaskin, owner of Echelon Resources, told the Fauquier Times last April.

Described by Gaskin, it is a project with “many moving parts” with issues of financing and qualification for Historic Rehabilitation Tax Credits to be worked out. Gaskin has conducted several public outreach meetings to discuss the project with residents in nearby communities.

According to Gaskin, the Imperial Lofts project in South Boston, completed in 2018, is most like the project envisioned at Vint Hill. Originally the c. 1890 Imperial Tobacco Company warehouse complex, it was used as a garment factory in the 1960s and totally shut down in 2000.

On to Vint Hill

Gaskin notes that redevelopment of the Vint Hill barracks, which would be called the “Vint Hill Lofts,” starts off with several notable assets.

The brick-and-masonry men’s barracks are, “Robustly constructed and architecturally interesting,” said Gaskin. “The history they’ve passed through and participated in is quite compelling. These factors certainly drive our interest in the site.”

The interior spans of the bays are 27 feet wide, allowing for a wide range of popular open-concept apartment designs. In addition, hook-ups for utilities, water and sewer already exist and are available for updating.

The three-story women’s barracks will have some design and layout differences, “But the overall residential product type should feel congruent between the two buildings,” according to Gaskin.

There is ample space for parking around the complex, and the final landscape design will focus on preserving the open-space areas surrounding the property.

“To us, the most intriguing aspect of this redevelopment project is its location within the overall Vint Hill community,” noted Gaskin. “We see a tremendous synergy being created by converting the blighting influence of the current condition of the barracks into a vibrant contributor to the Vint Hill campus, adding to its vitality and energy.”

There are several pre-construction requirements that must be met.

According to Gaskin, once the permits and approvals have been granted, the construction phase will take about two years.

A public hearing will be held by the Fauquier County Planning Commission on Thursday, Oct. 17, on a zoning text amendment to allow the former military barracks at Vint Hill to be converted into housing units.

Echelon Resources Inc., a Virginia company that rehabilitates historic properties, proposes to convert former men’s and women’s barracks into 22 studio and one-bedroom rental and for-sale condominiums at what would be called Vint Hill Lofts.

Echelon has applied for tax credits for historic building rehabilitation from the state’s department of historic resources.

Vint Hill Farms Station was opened because that specific location had the most active radio frequency properties in the United States needed for the primary communications equipment used during World War II.

Without any doubt it should have been closed as the Korean War ended because there was no military communications equipment operating at the “active” frequencies which justified Vint Hill Farms Station operation.

From that day forward to it's final closure Vint Hill Farms Station engaged in a quiet countryside boondoggle while at the same time hosting several sorts of surreptitious activity and programs that the Prince William Times would be petrified with fear to publish.

If you want to know more then buy a copy of The Puzzle Palace written by James Bamford.