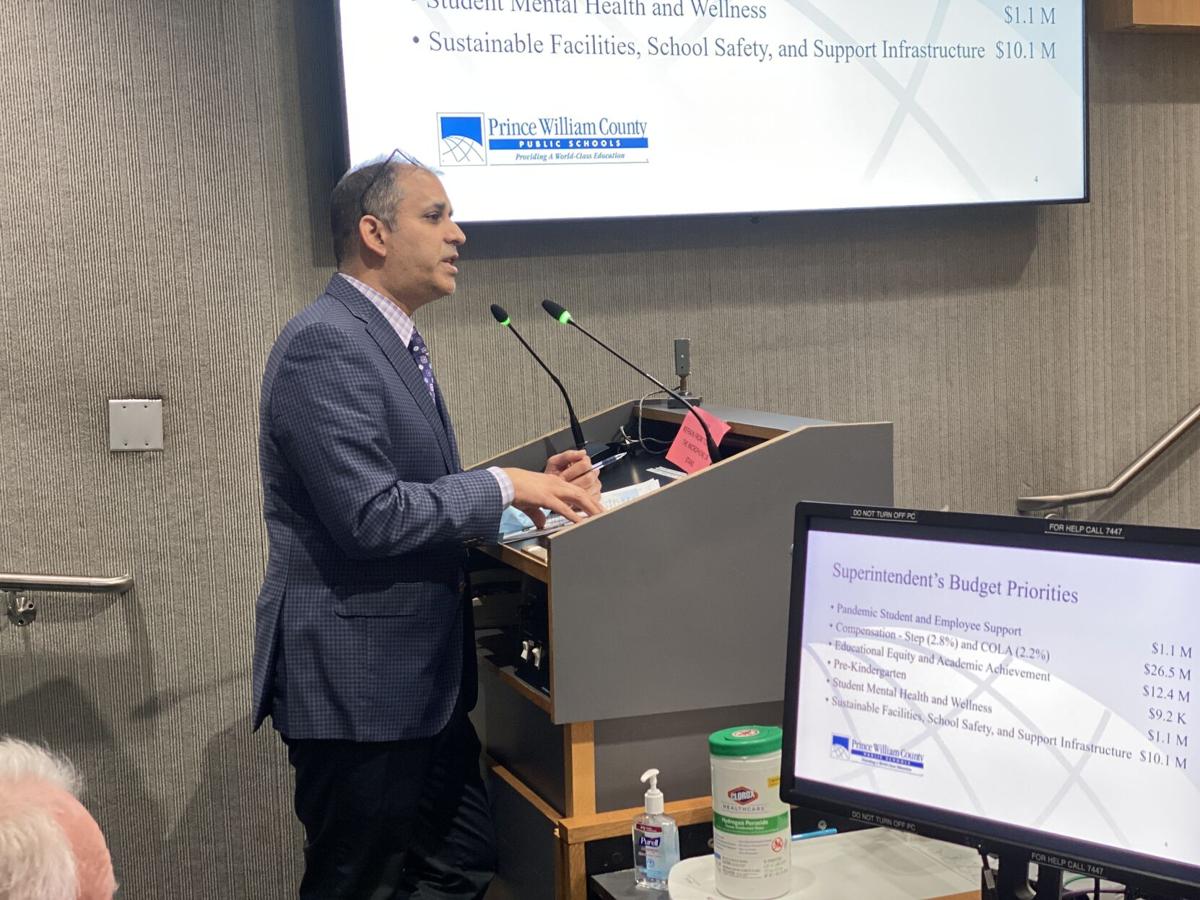 School Board Chairman Dr. Babur Lateef presents the school board's 2021-22 budget to the Prince William Board of County Supervisors on Tuesday, April 6. 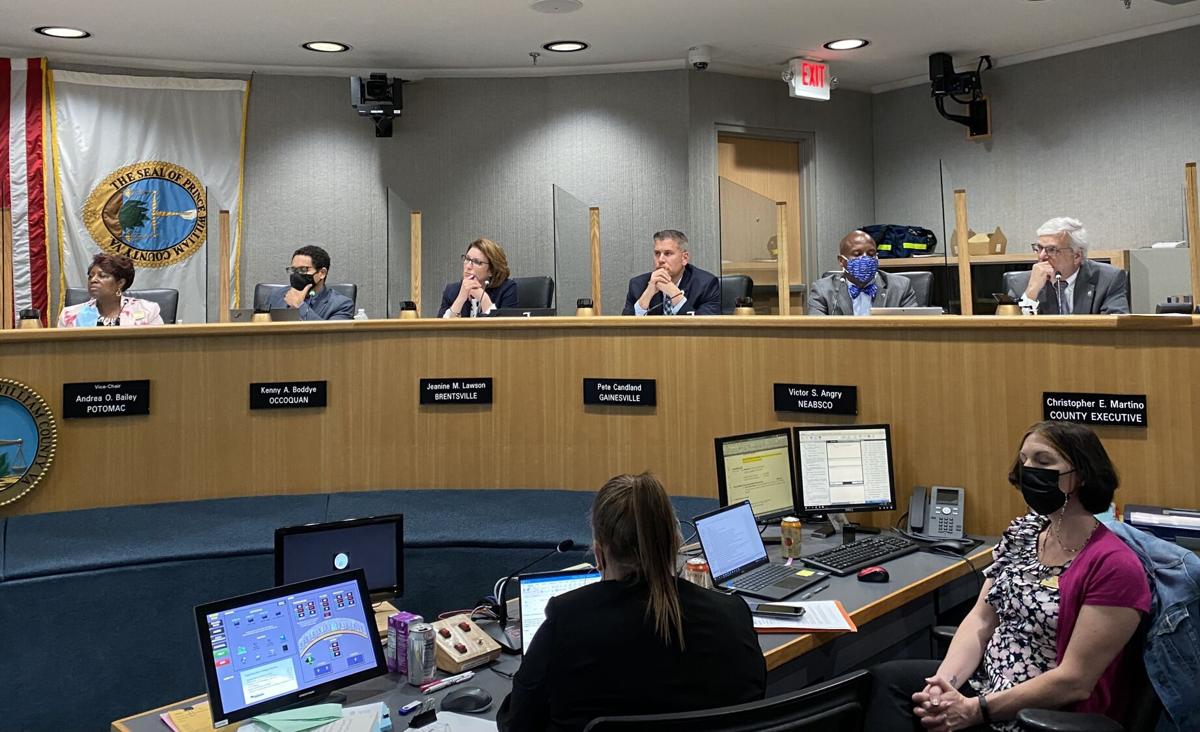 The Prince William Board of County Supervisors listen to a presentation during the board’s April 6 meeting.

Despite the pandemic, or maybe, in part, because of it, Prince William County teachers and staff are on track to receive their largest annual raise in more than a decade.

The Prince William County School Board is committed to giving its teachers and staff a 5% raise next school year even if the county board of supervisors doesn’t fully fund the school division’s fiscal year 2022 budget, School Board Chairman Dr. Babur Lateef said Tuesday.

“We’re going to try to do it no matter what,” Lateef said in an interview after delivering the school board’s $1.6 billion budget to the county supervisors during their April 6 board meeting.

The school board’s budget for next school year, approved by the school board last month, relies on the long-standing revenue-sharing agreement that directs 57.23% of the county’s general fund tax revenue to county schools. The budget is also based on the supervisors’ five-year spending plan as well as County Executive Chris Martino’s proposal to keep real-estate tax rates flat at $1.125 for the coming fiscal year, which begins July 1.

Because residential property values have risen by about 7% since last year, average real estate bills are expected to rise by about $306. The 7% assessment bump was higher than expected and driven in part by an increased demand for single-family homes after the pandemic forced families to work and attend school from home.

The three Republican supervisors have been pushing for a “flat tax bill” that would push the real estate tax rate down to $1.052 and require about $51 million in cuts from Martino’s proposed county budget.

But there seems to be little appetite on the Democratic-controlled county board to reduce the tax rate that much. The supervisors voted March 2 to advertise the current tax rate with the idea of possibly trimming the rate before passing the final budget.

The supervisors have until the end of April to refine their budget, which must be adopted by May 1. Lateef said he doesn’t expect the kind of changes that would cause the school board to reduce the proposed 5% raise for teachers and staff.

“I think within the context of what the supervisors may be entertaining, I still believe we can do our raise. And it’s really important, because we’re among the lowest paid teachers and staff in the region,” he said.

But the local school division lags behind most other Northern Virginia jurisdictions in average teacher salary. In Prince William, the average salary paid to teachers is $69,252, which is ahead of only Manassas Park ($64,489), according to the 2021 Washington Area Boards of Education Guide of local school division data.

The school board was initially set to deliver teachers and staff a 4.8% raise last year until the pandemic struck in March 2020, forcing the school board and the supervisors to cut tens of millions from both the county and school division budgets. Still, teachers and staff received an average 2.8% raise last year, meaning they could advance on the school division’s stepped salary scale, which ties teacher pay raises to years of experience and academic degrees.

But the school board eliminated a planned cost-of-living increase, cutting the planned raise almost in half.

During the 2019-20 school year, teachers and staff received a 4.8% raise, which Superintendent Steven Walts called the largest employee raise “in a decade.”

For the 2021-22 school year, Walts initially proposed a 3.8% raise, which included a 2.8% average raise in the form of a step increase and a 1% cost of living adjustment. The school board then asked Walts to increase the COLA to 2%. Walts returned with a plan to bump it to 2.2%, resulting in the 5% raise.

Since then, the Virginia General Assembly increased its funding for local school divisions to provide teachers and staff with a 5% raise over two years. But the funding bump requires a local match to reach the full 5%.

Prince William is providing the match as well as extra funding to allow teachers and staff the 5% raise in just one year’s time, John Wallingford, the school division’s associate superintendent for finance and risk management, explained to the supervisors Tuesday.

Lateef and Wallingford explained that the relief money cannot be used for ongoing expenses and that much of the money received in the first two allocations has been largely spent. The school division has so far used COVID-19 relief money to purchase about 98,000 laptops for students and staff; purchase personal protective equipment and plexiglass; provide free home internet to students in need; and to upgrade the school division’s internet network from 10G to 100G, among other expenses.

The school division will need to submit applications to the state for specific projects to obtain the $89 million for which it may be eligible under the ARP plan recently approved by Congress, Lateef said. The school board has not yet decided how it will use the money but will be considering options in the coming weeks, Lateef said.

Prince William County Public Schools delivered the board of supervisors a $1.6 billion budget that includes an additional $34.3 million in local funds, an increase of 5.45%, over last school year. Some of the new money will fund:

If they worked in the private sector they would have been fired for poor performance.

My child is at Battlefield and I sometimes sit in on the class. They work from home, they have Monday off, they are sometimes in class for the allotted time but often they get on zoom and teach for 15 or 20 minutes.

They leave early to fix their car or tend to their dog.

There has been a big jump in grading failures as I read here a handful of days ago.

They hold the school hostage with their selfish union demands.

Oh please...discharge them all andet them reapply tossing out what are clearly the deadwood.

They strive to teach the mantra of telling the kids WHAT to think and fervently avoid teaching how to think.