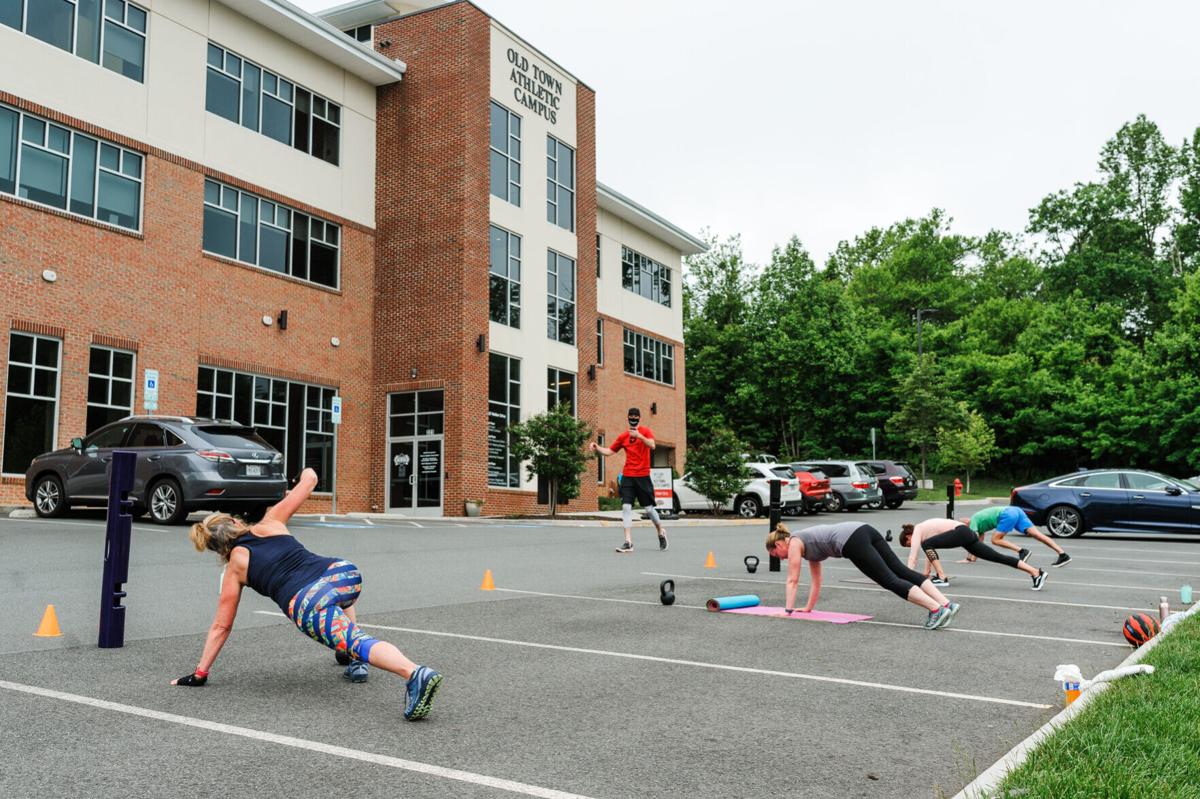 Matt Davenport (in the red shirt), a trainer at Old Town Athletic Campus, leads a workout session in the gym’s parking lot on Wednesday. 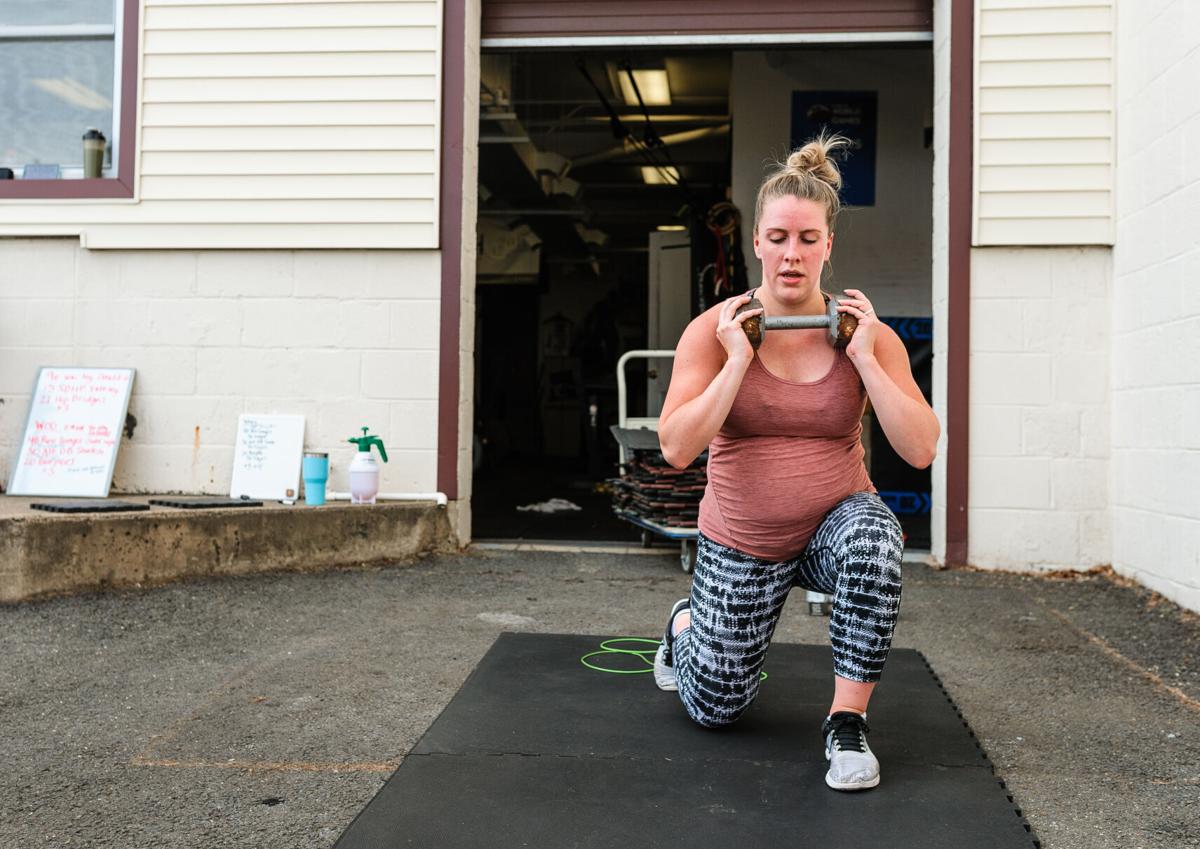 Kelsea Andresen, 29, of Warrenton, performs a lunge with weights during a workout session outside of CrossFit Warrenton on Tuesday. 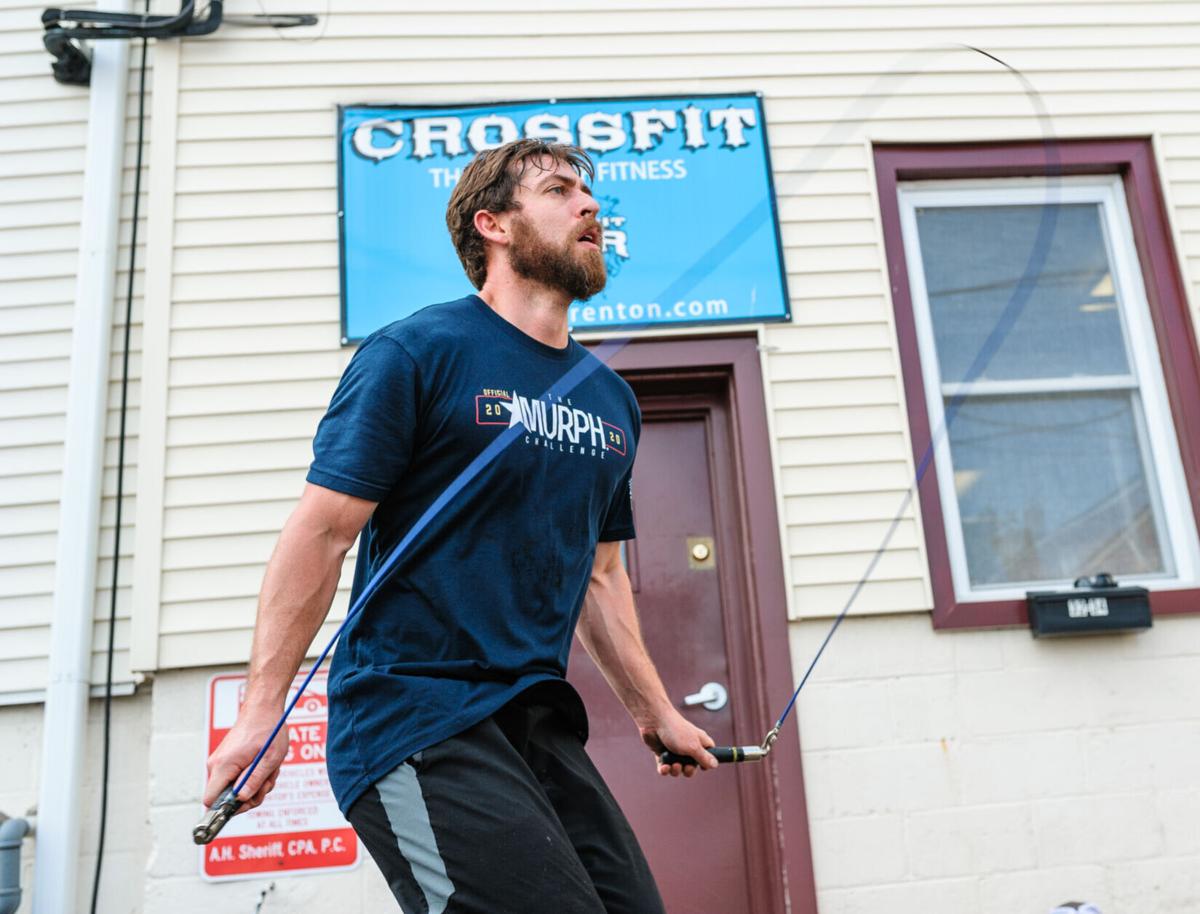 Jesse Hebert, 39, of Broad Run, jumps rope as part of a workout routine outside of CrossFit Warrenton on Tuesday. 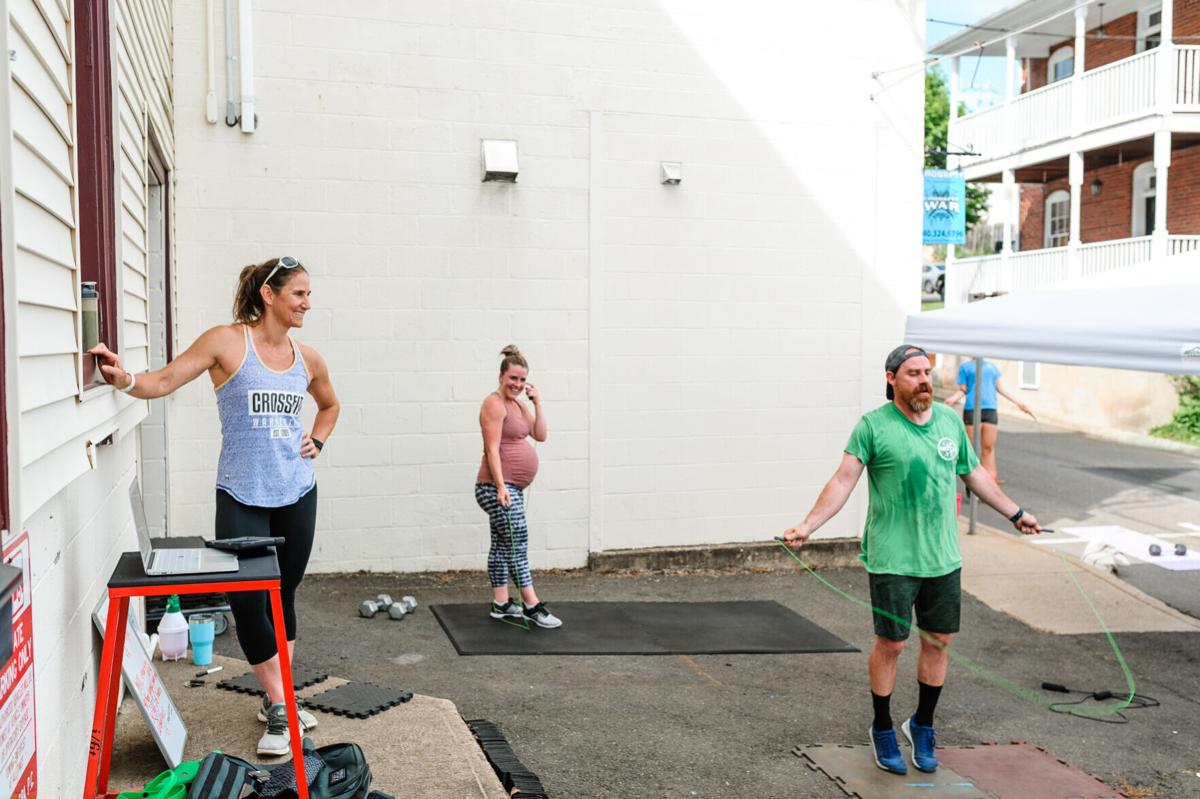 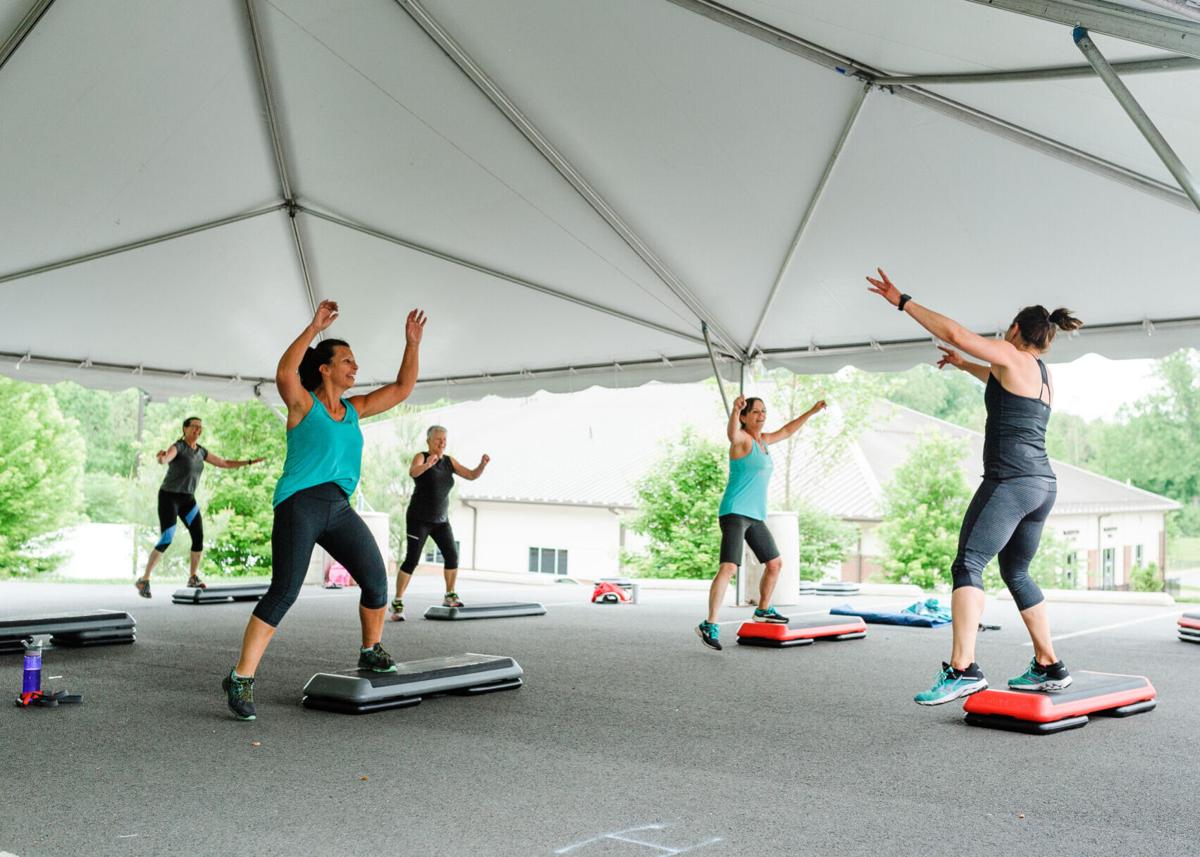 Christina Fischer (right), a trainer at Old Town Athletic Campus, leads a workout Wednesday under a tent set up in gym’s parking lot.

Fitness facilities are now able to reopen after two months of being closed to any onsite operations. But with many restrictions remain in place. Workouts can only be conducted outdoors and in groups of not more than 10 people.

On May 15, most of Virginia – including Fauquier County – entered Phase 1 of Gov. Ralph Northam’s plan to lift restrictions imposed during the novel coronavirus pandemic. Fitness centers in Virginia had been closed since March 15.

In practice, the many restrictions now in place for Phase 1 mean that relatively few of the most dedicated exercisers are able to access in-person workouts; the businesses face an uncertain future.

Kim Forsten, the owner of the expansive Old Town Athletic Campus in Warrenton, said that the two-month closure of the gym has made her realize how important exercise is to her clients.

“I have never believed more in what we’re doing than now,” she said. Since Phase 1 began, five areas in the parking lots surrounding the gym facilities adjacent to Walker Drive have been converted into workout spaces, complete with large event tents to keep rain and sun off the exercisers.

“It’s not the greatest situation for our membership, but it’s a start,” Forsten said, explaining that because of the Phase 1 restrictions only 45 members and five staff – 10 people total in each area – can participate in workout sessions at any given time.

Although the outdoor sessions are “a really positive stepping stone” toward normal operations, she said that a lack of guidance from the state government about what the future will look like makes planning difficult.

“We’ve made plans and then they’ve been changed,” she said, citing the fact that the beginning of Phase 1 was moved from its original date of May 8 to May 15. She has received “no clear guidance on Phase 2 from the governor’s office,” she said.

Owners of gyms in particular, “have a very deep concern for public health,” she said. “I believe so deeply in what we do,” she elaborated, citing the benefits to both physical and mental health that regular exercise can bring, along with the stringent sanitation practices that were in place even before the pandemic.

For the people who exercise regularly, “it is essential to them,” she said, a not-so-subtle reference to the divide between businesses deemed “essential” and “non-essential” by government entities during the pandemic.

Forsten was careful to express positivity, however, despite the uncertainty and general frustration with the situation. “We are going to figure it out. We’ve got to keep focusing on what we can do – keep fighting.”

Chestnut Forks Athletic Club, off U.S. 29 outside of Warrenton, has a fitness center, pool, café, tennis courts and a golf simulator. “It’s almost like having five businesses at once,” said Derek Maloney, who manages the club with his wife, Beth. They are in regular contact with the health department to try to navigate the regulations governing each facet of the business.

The Maloneys said that the spacious parking lot, some of it shaded by trees, has proved a popular workout space with trainers and members alike as the fitness center has offered outdoor exercise classes outdoors since May 15. The club’s outdoor tennis courts are now open – the indoor courts remain closed - and the pool is set to open this month provided government regulations do not change.

While being prohibited from using indoor spaces is not ideal from a business or fitness standpoint, both Maloneys stressed the importance of reopening to the long-term viability of the club. “We have to do it sooner than later, because it comes down to the bottom line,” Beth Maloney said, adding later, “As a business we’ve got to keep pushing on or else we’re not going to be here anymore.”

Live and recorded video workout classes, along with at-home challenges, have been available to members of CrossFit Warrenton during the pandemic, said Crystal Willis, who owns the specialty gym with her husband, Justin. “But you can only do that for so long,” she said.

On May 27, Willis was outside her Second Street gym leading six members in a workout session. The setup was improvised; Town Manager Brandie Schaeffer facilitated an arrangement with an adjacent accounting firm so that the gym could utilize two cramped parking spaces for outdoor workouts.

Those participating in the session were spread out, some under tents, others in a blocked off space in the street. They had brought their own equipment, most of which had been loaned to them by Willis for at-home workouts while gyms were closed.

Jesse Hebert, 39, of Warrenton, was one of the members participating in the workout. “It sucked” when gyms closed, he said. “It was hard, especially at first.” He credited Willis for making video classes available online and keeping communication open between members. “I love [CrossFit],” he said. “It’s my therapy, my outlet. I’m not motivated to do it by myself.”

Kelsea Andresen, 29, of Warrenton, was also there working out. Now eight months pregnant, she said she began attending CrossFit classes last year in anticipation of starting a family. “I was determined to be in the best shape of my life,” she said, adding later, “I've felt phenomenal throughout my pregnancy and I believe the gym has been a major contributing factor to why I feel so good.”

The community aspect of CrossFit is also important, she said, making the gym closures especially difficult. “We're wired to live in community, and I think the last few months of separation have been difficult for most of us in some capacity.”

Mike Stumpo, 57, of Warrenton, was part of the next session. He agreed about the value of the community that forms around regular group workouts in addition to the more direct benefits, which he credits with improving his mental and emotional health as well as his physical health. “You really do develop a bond with the people who come here,” he said. The inability to come to the gym has been “dreadful.”

Jackie Elo, 27, of Warrenton, also attends regular workouts at CrossFit Warrenton. Now that outdoor workouts have resumed, “I feel a lot better. I’ve been sleeping better.” She added with a laugh, “and losing the weight I gained over quarantine.” She said that since May 15 she has more greatly appreciated the benefits of the regular workouts and has come to classes more regularly than before the pandemic.

Another area gym, CrossFit Vint Hill, is owned by Rob and Caitlin Jenkins and is also offering outdoor workout sessions. “Outdoor workouts have been working well,” Rob Jenkins said in an email, “but there's nothing like being inside our space and having access to our facility.”

Like other gym owners, he said, “In my opinion, fitness and health are essential,” citing the emotional and mental benefits of exercise.

Richie Parsons owns the Anytime Fitness franchise in Warrenton with his wife, Charissa. In normal times, the gym is open 24 hours a day, seven days a week. The gym is offering limited outdoor workout sessions on the sidewalk in Warrenton Village Center; they are usually attended by the same core group of individuals, he said.

While the ability to host outdoor workouts is a nice step for a small number of gym-goers, “for a lot of gyms, it’s not really that helpful,” he said, especially those who do not have large outdoor spaces they can utilize. “On the surface, [allowing gyms to operate outdoors] seems like a concession, but it’s not really a long-term solution,” he elaborated.

On the financial side, because of the extremely limited revenue being generated now, “it’s really not that different from being closed,” he added. “No one should think that this is, in some way, helping gyms stay in business.”

He said later, “We are offering [outdoor workouts] because we can, but somebody needs to get in the governor’s ear and explain the situation to him,” referencing the sanitation practices already in place before the pandemic.

Since the pandemic began, members have had access to an array of online workout classes, he said, “but working out at home is just not really a good solution for most people.”