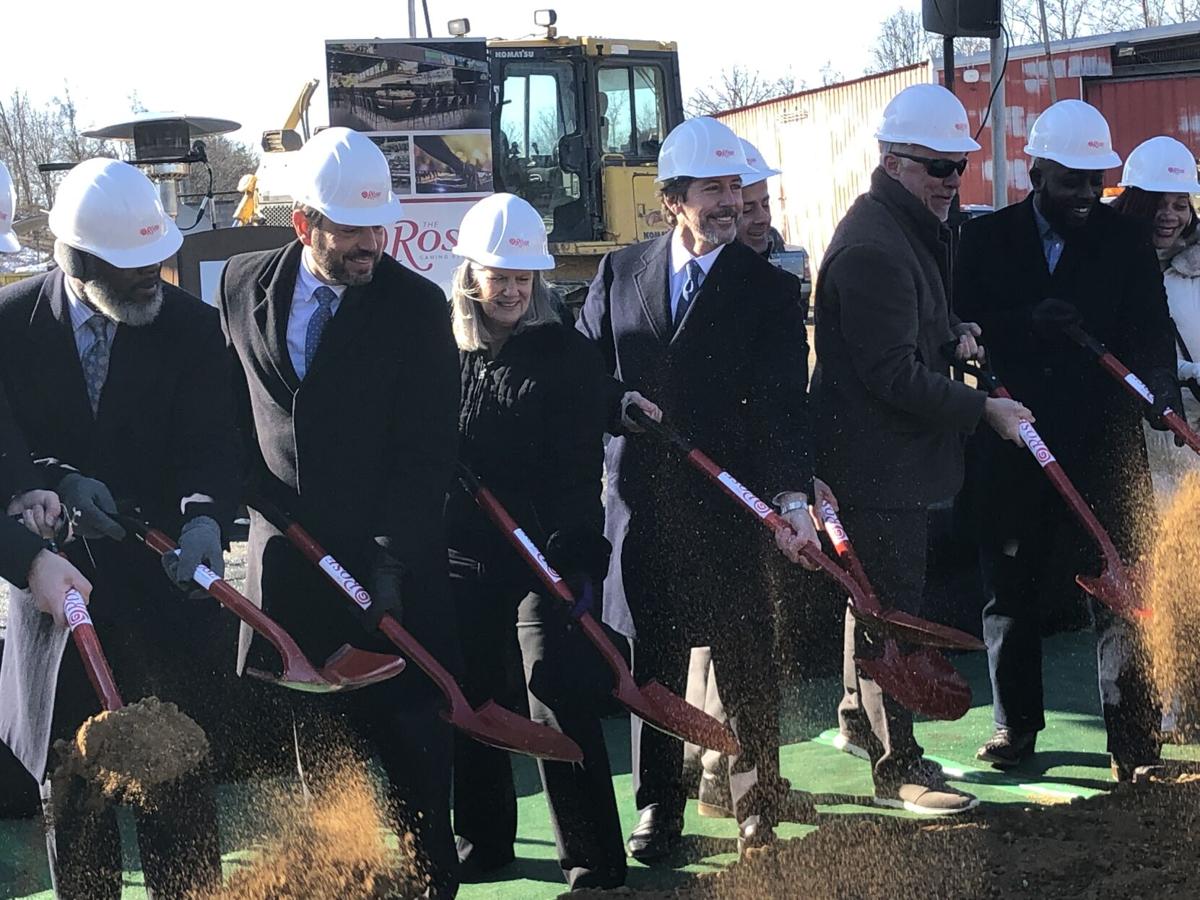 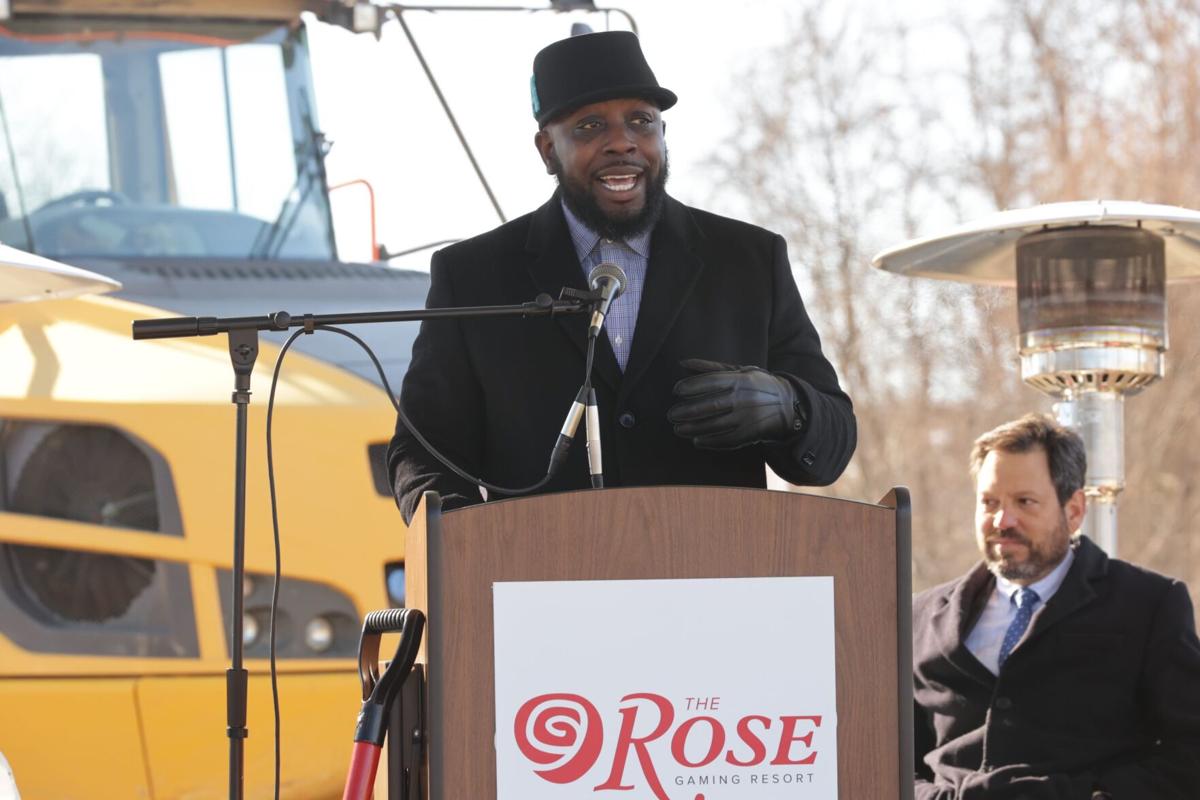 Dumfries Mayor Derrick Wood speaks during a ground-breaking ceremony for The Rose on Tuesday, Jan. 11.

Prosperity is coming to Dumfries and Prince William County, according to those who spoke at the ground-breaking ceremony Tuesday morning for “The Rose Gaming Resort,” a nearly $400 million gaming facility, hotel and public park set to open in 2023.

“We couldn’t be more excited to take this next step towards bringing more well-paying jobs, increased tax revenues to this region and the commonwealth,” said Aaron Gomes, chief operating office of Colonial Downs Group, which is building The Rose. “We will do it by building a top-notch tourist destination right here.”

The ceremony was held at the Potomac Landfill, a longtime construction debris landfill located at the southwest edge of Dumfries bordered by Va. 234 and Interstate 95, agains the backdrop of dump trucks still hauling trash to the site. About 50 people braved the frigid, 25-degree weather to attend the event.

The landfill is closing at the end of January, about 10 years ahead of schedule. It has been in operation since 1984. Work on the new gaming facility will begin with capping the landfill, which Colonial Downs Group must do before construction can begin. That process is expected to start within the next few months.

The gaming resort will feature a hotel with up to 305 rooms, eight restaurants, a 1,500-foot conference and meeting space, a cultural events center and 50,00 square feet of gaming space. Colonial Downs, which will own the gaming facility, has promised the project will be accompanied by a new public park. The park will be built atop the closed landfill, which encompasses 80 acres of the 93-acre site. Colonial Downs will maintain the park for 10 years before turning it over to the town.

Colonial Downs opened Rosie’s Gaming Emporium, a smaller gaming outlet, a year ago in the Triangle Shopping Center in Dumfries. It will close when The Rose opens.

“That’s why we know we can do more and create something that is even bigger and better” in Dumfries, he added.

“It’s time to create something new and exciting that will benefit our community,” said Dumfries Mayor Derrick Wood. In addition to the tax revenue The Rose will generate, Wood said he’s “most excited about the green space that will come.”

“I believe it will be a centerpiece of our community. I’m extremely hopeful for what Dumfries will become in the years ahead,” Wood said.

The park will include more than two miles of hiking and fitness trails, historical preservation sites, sport areas, playgrounds and a dog park.

State Sen. Scott Surovell, D-36th, said The Rose will allow Dumfries and Prince William County to get a share of the tax revenue generated by Virginia residents who travel to Maryland to gamble.

“What has always bothered me is the $350 million going across the bridge every year” to the MGM National Harbor Casino in Maryland, Surovell said. “What this does is create an opportunity for Virginia money to stay in Virginia and go to Dumfries.”

“Twenty years from now, Prince William County is going to look like a very different place,” Surovell said. “This creates a real opportunity to maximize that.”

“We are committed to Virginia, Dumfries and Prince William County and we are in it for the long hall,” said Brent Stevens, founder and chairman of Peninsula Pacific Entertainment, the parent company of Colonial Downs Group.

The Rose is Virginia’s first casino-sized gaming facility that’s technically not a casino. By state code, gambling at “The Rose” will be limited to off-track betting and historic horse race betting machines, which are similar to slot machines.

The Rose is projected to employ about 600 people and generate an estimated $11 million in annual tax revenues for the town of Dumfries and an additional $8 million for Prince William County when fully operational, according to an economic development study prepared for Colonial Downs.

With COVID-19 vaccinations just getting under way in December 2020, the new year held the pr…

“The Rose” gaming facility and hotel in Dumfries is one step closer to becoming a reality.

The article states the Potomac Landfill is located on the southwest side of Dumfries. It looks more like the northwest side to me.