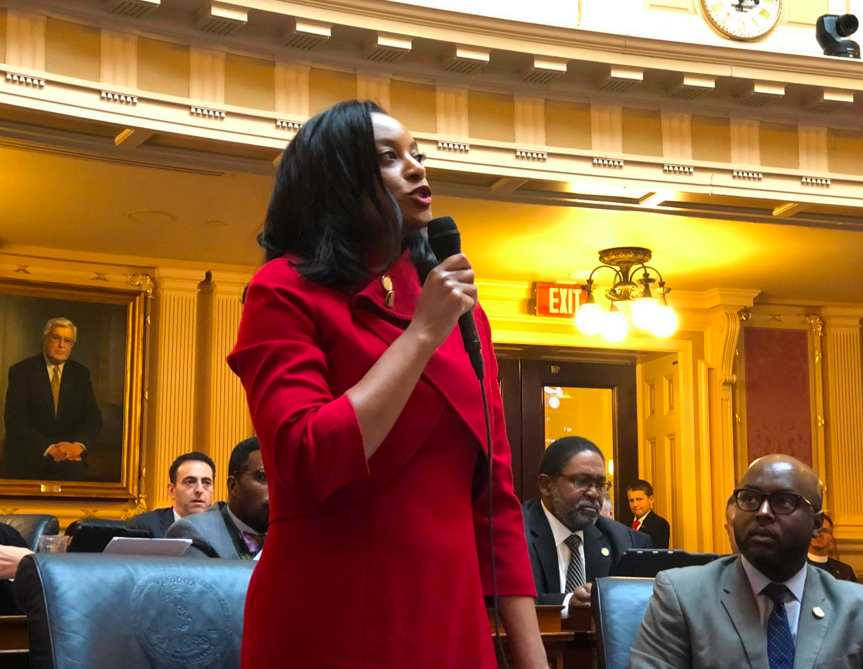 Del. Jennifer Carroll Foy, D-2nd, speaking on the floor of the House of Delegates. 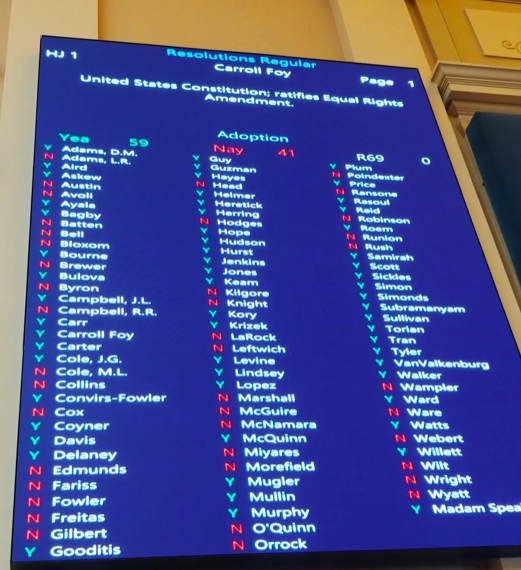 The Virginia House of Delegates voted 59 to 41 to ratify the Equal Rights Amendment on a mostly party-line vote. Four Republicans cast votes in favor of the measure. 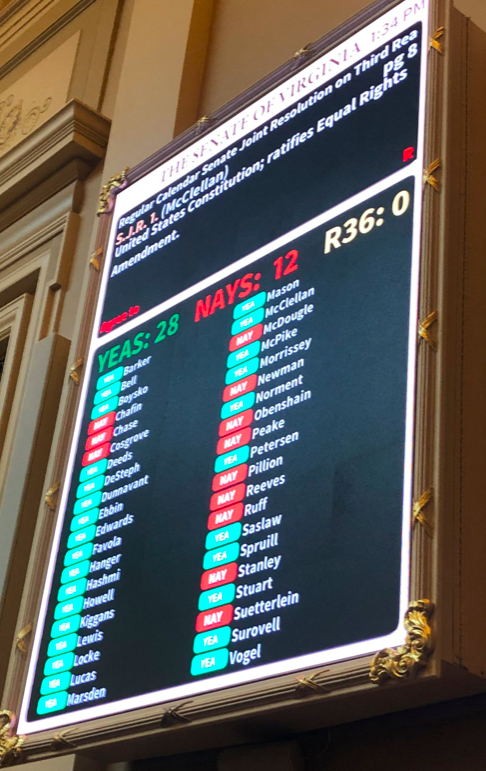 In the Virginia state Senate, the ERA amendment was ratified in a 28-to-12 vote with all Democrats and seven Republicans voting in favor.

The Virginia House of Delegates and state Senate passed the Equal Rights Amendment Wednesday, putting Virginia on track to become the 38th state to ratify the amendment.

The state Senate voted 28-12 to pass the measure, with 21 Democrats and seven Republicans voting in favor.

All 13 members of Prince William County's state delegation voted in favor of ratifying the ERA, including Sen. Richard Stuart, R-28th. Stuart  voted against the amendment in 2019.

BREAKING: The House of Delegates just passed HJ1, my resolution to have Virginia be the 38th and final state to ratify the Equal Rights Amendment. pic.twitter.com/kJhv5SmgaA

The Virginia House of Delegates just voted to ratify the Equal Rights Amendment as the 28th Amendment to the Constitution of United States of America.
“Equal rights under the law shall not be denied or abridged by the United States or any State on account of sex.” pic.twitter.com/irIF1NkayJ

“As the House sponsor of the bill, it is an honor to lead the effort in this historic moment for women,” Foy said. “This vote demonstrates how greater female representation in government can significantly improve the lives of women across the country. We are here and will be heard.”

Ayala, who has centered her legislative priorities around providing equality and equity in Virginia, said the ratifying the ERA is a major step forward in achieving equality for all Americans.

“As a single mother and Afro-Latina woman, I have personally witnessed and experienced the discrimination that impacts marginalized communities,” Ayala said in a statement issued after the vote.“We cannot sit still as these problems rage around us. Today, we stood up and spoke out to make sure women are shown equal respect under the Constitution.”

The ERA, if approved by Congress, will provide women the same recognition as men under the United States Constitution and would end legal distinctions between men and women in issues such as divorce, property, employment and other matters.

The ERA was passed by Congress in 1972 but needed to be ratified by 38 states by 1982 to be adopted into the U.S. Constitution. At the time, only 35 states had ratified it, and the amendment was never taken into the Constitution.

Virginia will become the 38th and final state needed to ratify the amendment once it’s signed by Gov. Ralph Northam -- 38 years past the deadline.

It’s not clear yet whether the amendment will be ratified by Congress given the deadline. Also, five states that passed the ERA prior to 1982 – Kentucky, Nebraska, Idaho, South Dakota and Tennessee – have since rescinded their ratifications, further adding to the uncertainty surrounding the proposed amendment.

Foy said in an interview with Prince William Times in December that legal challenges were expected but that she was “more than confident that the Equal Rights Amendment will survive any type of legal challenge and become a part of the United States Constitution.”

This is a good day for Virginia the ERA is long overdue, and it is important that this is enshrined into our constitution. To those saying woman have equal rights already, that is in theory however it is still legal, to make laws that harm equality, with a constitutional amendment this is very hard to challenge and equality can be much more easily enforced.

Don't women already have equal rights or is this more hogwash?