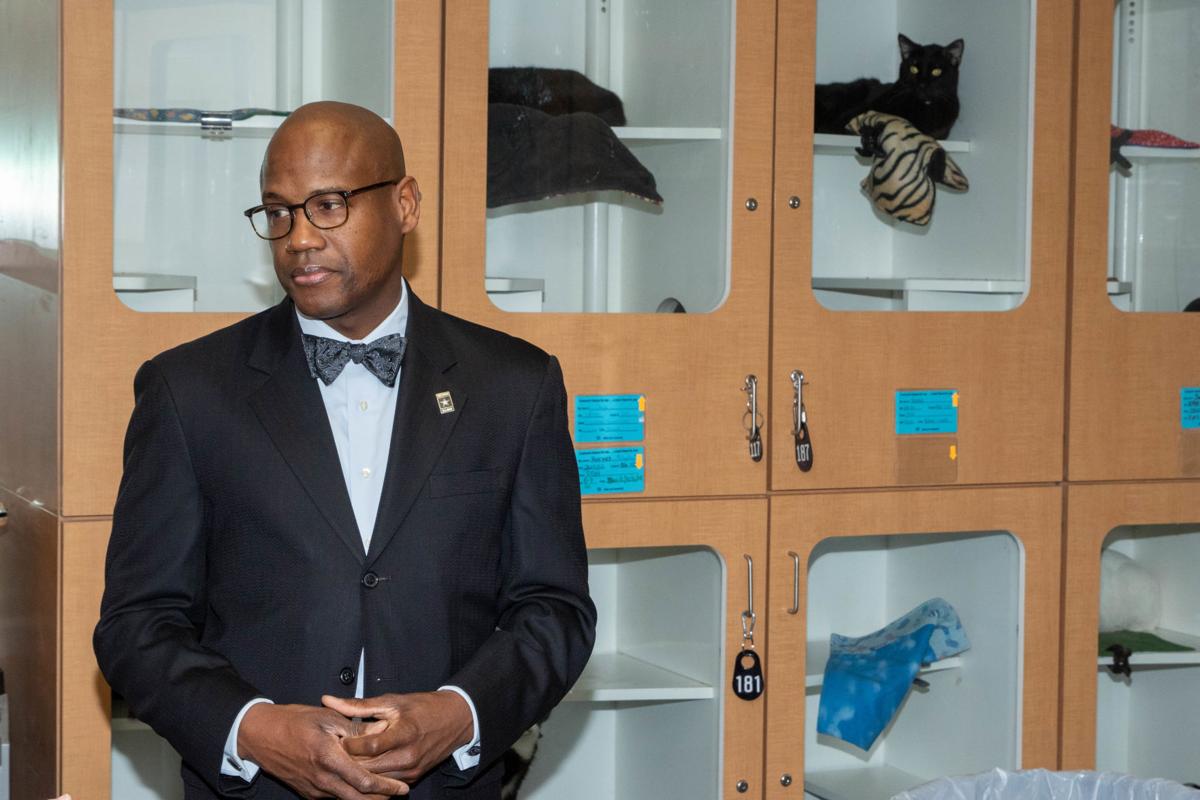 Supervisor Victor Angry, D-Neabsco, hears about the "cat condos" at the Prince William County Animal Shelter. Angry's visit was prompted by concerns about a delay in the new shelter because of higher-than-expected construction costs and the cuts county staff are proposing to bring the new shelter to fruition within the project's $15.1 million budget. 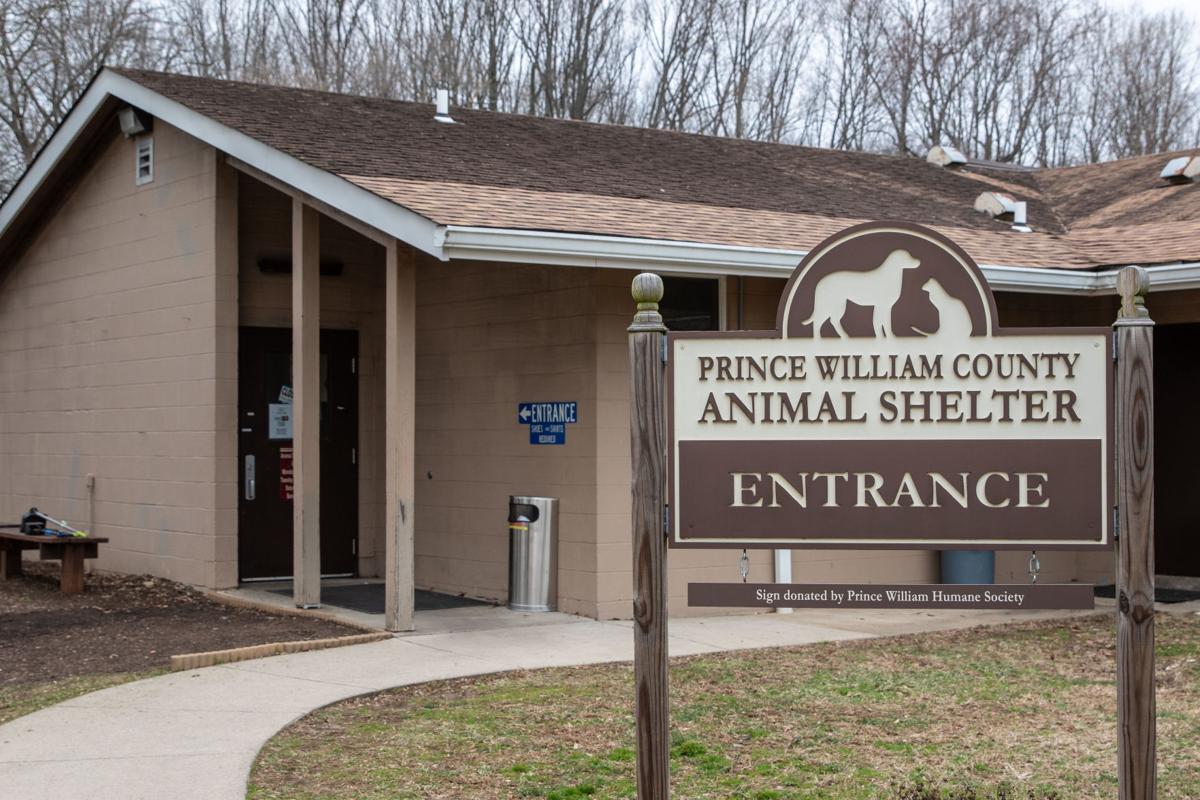 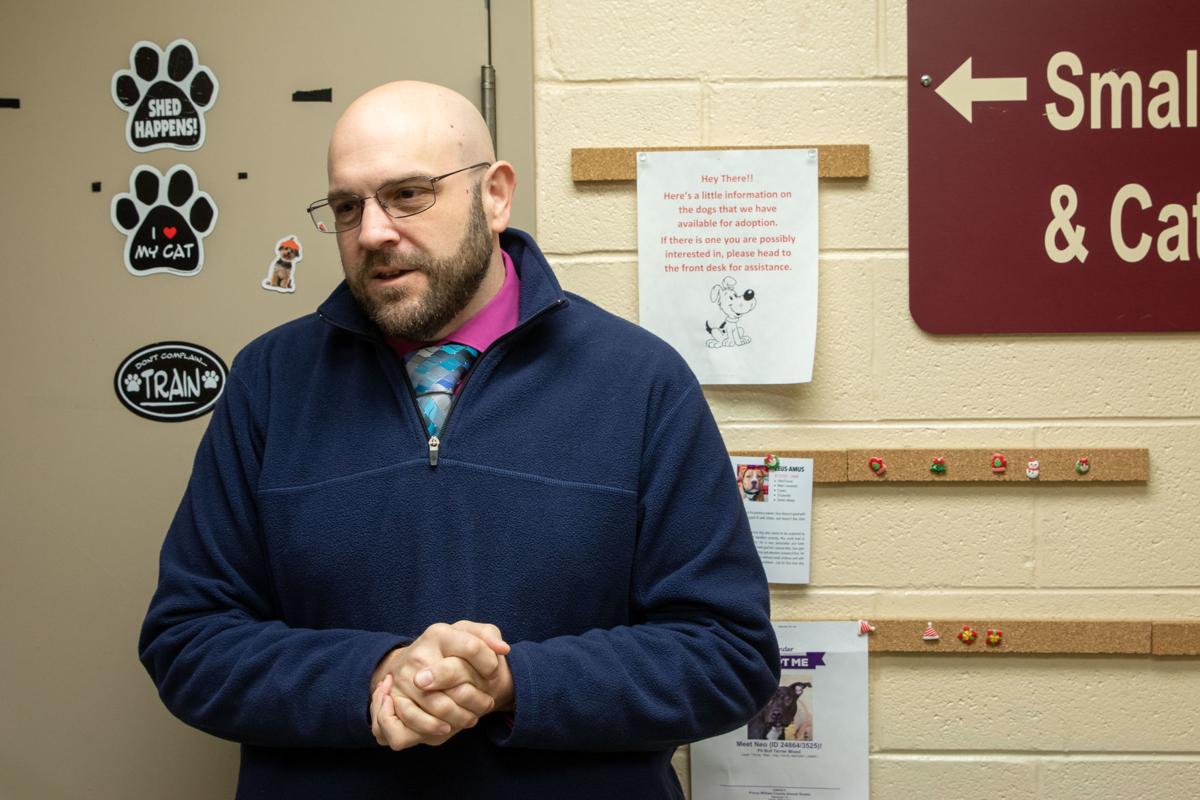 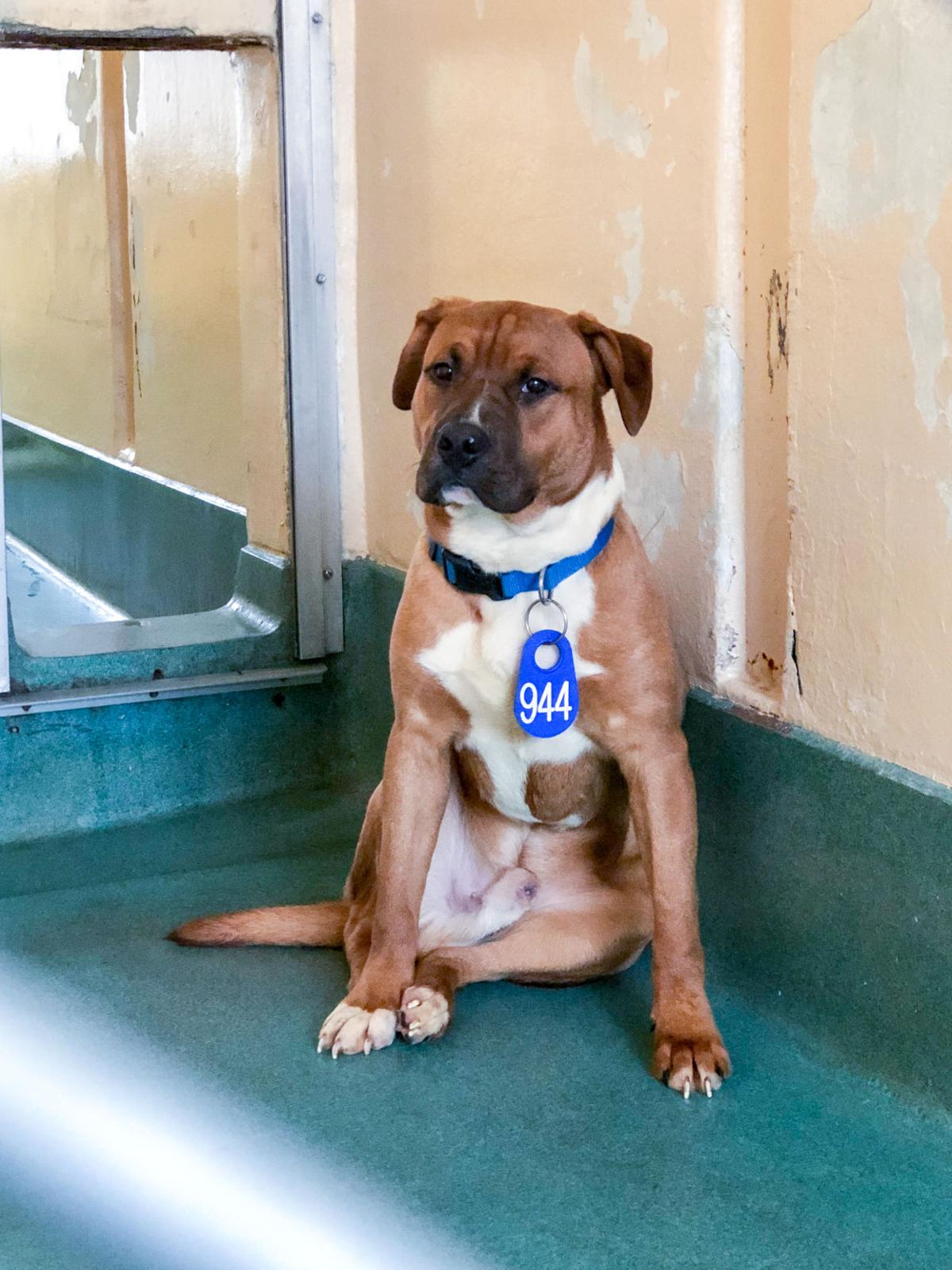 A dog housed at the Prince William County animal shelter in January 2020. 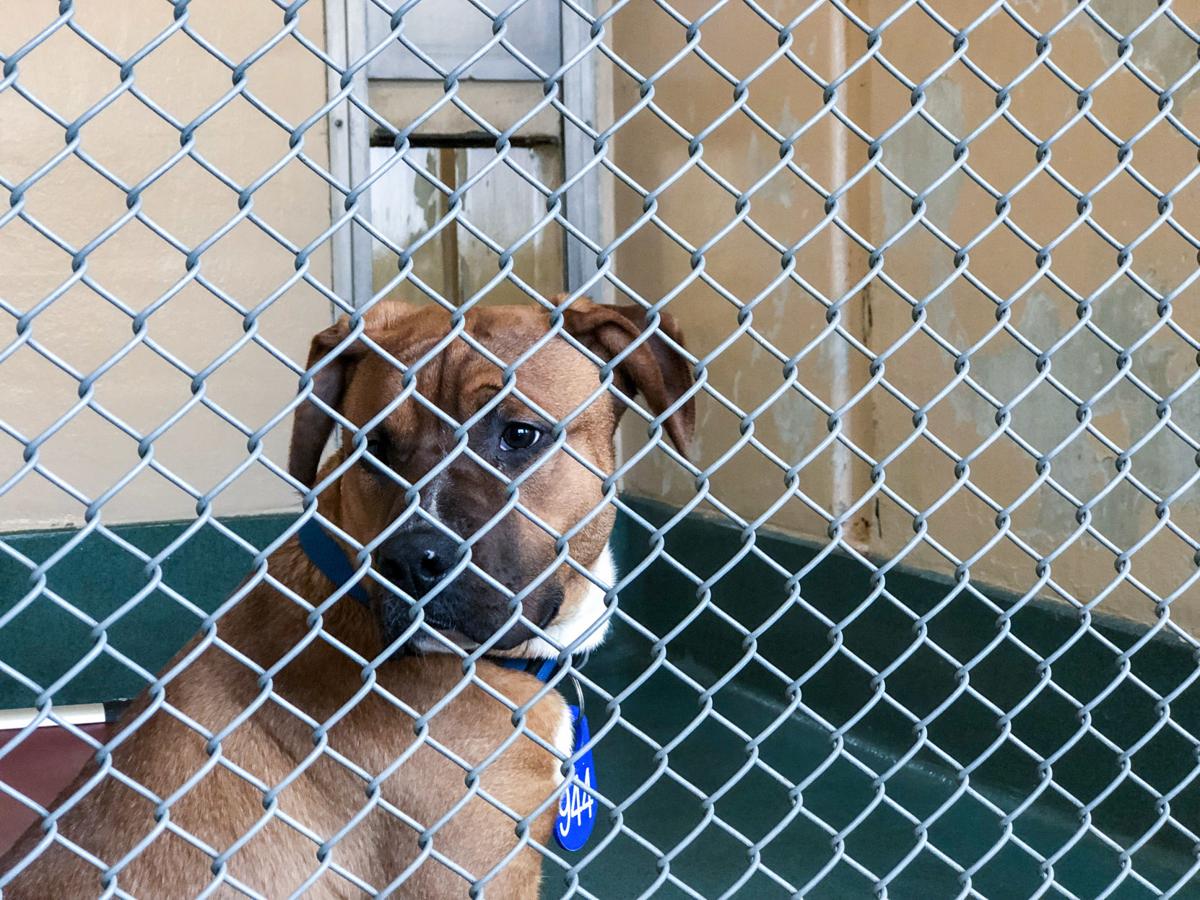 A dog housed at the Prince William County Animal Shelter in January 2020. 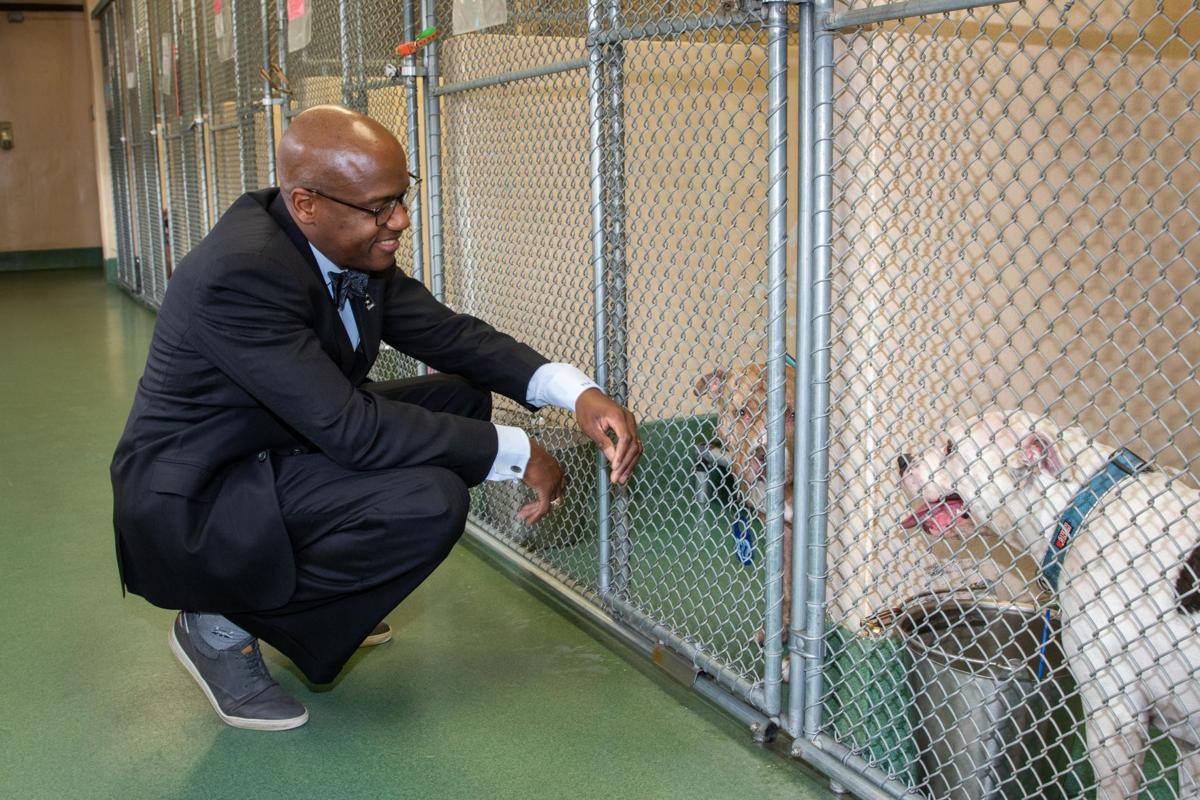 Supervisor Victor Angry, D-Neabsco, visits with some of the dogs housed at the Prince William County Animal Shelter on Friday, Jan. 31.

Supervisor Victor Angry, D-Neabsco, hears about the "cat condos" at the Prince William County Animal Shelter. Angry's visit was prompted by concerns about a delay in the new shelter because of higher-than-expected construction costs and the cuts county staff are proposing to bring the new shelter to fruition within the project's $15.1 million budget.

A dog housed at the Prince William County animal shelter in January 2020.

“Unacceptable” is the word Supervisor Victor Angry used to describe the Prince William County Animal Shelter after touring the facility Friday. But Angry was quick to praise the shelter staff for doing the best they could in a cramped building that’s 44 years old and clearly in need of a major upgrade.

“We can talk about it all day, but when you see it, it makes it a reality,” said Angry, D-Neabsco, who was elected in April 2019 but had not previously visited the animal shelter. “It’s a very clean environment, but it’s very packed in there. It’s too tight for what they are doing.”

The animal shelter, built in 1975, has been slated for replacement since about 2015. That’s when the former board of supervisors began discussing a new shelter after allocating about $30,000 to upgrade the facility’s heating, ventilation and air-conditioning system after it was partly blamed for an outbreak of the highly contagious calicivirus, also known as FCV, that forced the shelter to euthanize 73 cats.

In 2017, the supervisors voted to spend $15.1 million to demolish the existing shelter, at 14807 Bristow Road near Independent Hill, and build a new one about four times its size on the same site.

At the time, a county audit of the animal shelter showed the shelter was taking in as many as 4,000 animals a year but euthanizing about 20 percent of them, sometimes due to overcrowding.

The design the supervisors approved for the new shelter, dubbed “option C,” is intended to address that problem by not only providing more space but also by following the Association of Shelter Veterinarians’ guidelines for standards of care in animal shelters.

Angry’s visit came about 10 days after the supervisors learned construction on the new shelter will be delayed until at least late 2021 because of higher-than-expected costs. The lowest bid came in about $13.2 million, which is $2.7 million more than the $10.5 million the county allotted for general construction.

Now, county staff is working with the lowest-bidding contractor to make cost-saving adjustments that are intended not to significantly alter the new animal shelter’s features, according to Tom Bruun, director of the county’s department of public works.

Changes include using a flat instead of sloped roof, omitting a barn for surrendered farm animals, installing a less costly HVAC system, paving less of the gravel parking lot, buying stormwater credits instead of building a retention pond, trimming allowances for cost overruns and switching out some of the interior finishes that were recommended by the animal shelter expert the county hired to consult on the new shelter, Bruun said.

As an example, Bruun said the shelter will use ceramic-faced concrete blocks for the dog kennel walls instead of glazed block, which is preferred because it is easier to clean and resists bacteria.

Regarding the shelter’s overall delay – it was initially hoped to be under construction in 2019 – Bruun said rising costs were a challenge at each stage of the design process.

“The biggest issue was managing the project to keep it within budget, as the cost of construction rose significantly in this area and nationwide,” Bruun said in an email Monday.

“At each point, costs exceeded the budget, and value engineering was performed to bring the project back in budget,” Bruun said. “…Some of these [value engineering] sessions were time-consuming and required the designer to redesign and tighten up the building.”

Bruun stressed the shelter will still meet ASV guidelines. But some supervisors and residents, alike, are raising concerns about the delays and the possible ramifications of all the cost-cutting.

Melissa Korzuch,president of the Prince William SPCA, says her group worries the new shelter will be too small and that the county won’t be able to afford key items that have been cut, including the barn and equipment for the veterinarian suite.

“The shelter we wanted to have built … is not the shelter we are getting. It’s been reduced dramatically and we are disappointed,” Korzuch said Monday. “Our worry is that the things you cut out, you may never be able to get funding for.”

Supervisor Jeanine Lawson and Supervisor Margaret Franklin joined Angry in expressing similar concerns this week. All said they are still talking with county staff to get a better understanding of the cuts.

“I absolutely have angst about how this has been handled and the 18-month delay,” Lawson, R-Brentsville, said Monday.

“If the purpose [of building a new shelter] is to prevent the problems we’ve had with the current shelter, it doesn’t make sense,” Lawson said of the decision. “It defeats the whole purpose.”

The shelter needs to satisfy the community’s expectations, Lawson added, “not just for the animals cared for there, but for the staff who works there.”

“I am equally concerned about the steep cuts to this project,” Franklin, D-Woodbridge, said in a statement. “Any new animal shelter built in our county should be complete with the necessary resources that can safely house our animals and provide the highest quality of services and care.”

Animal shelter Director Anthony Cleveland declined to comment on the changes the county is considering to save money on the new shelter, referring all such questions to county public works.

But Cleveland noted the shelter has reduced the number of animals it euthanizes each year through a “managed intake” policy he implemented in 2018.

To avoid overcrowding, which stresses the animals and can lead to aggressive behavior, the shelter maintains a waiting list of 10 days or more. People who want to surrender their animals are referred to rescue organizations or encouraged to find other ways to rehome their pets, Cleveland said.

“Essentially, managed intake is asking the public to help us help their animals,” Cleveland said.

The new policy has coincided with a significant drop in both the number of animals accepted at the shelter and the number euthanized.

Over the past two years, the number of dogs and cats accepted at the shelter dropped from 3,179 in 2018 to 2,738 in 2019, a reduction of nearly 14%. In the same period, the percent of dogs and cats euthanized dropped from 14.9% to 11.5%, according to annual reports compiled by the Virginia Department of Agriculture and Consumer Services.

Cleveland said the shelter now has an adjusted euthanization rate of less than 10%. The adjusted figure doesn’t count the number of animals that must be put down because they are terminally ill when they arrive at the shelter, Cleveland said.

Carol Litchfield, a volunteer with the SPCA and a former member of the county’s animal advisory committee, said the organization is doing all it can to ensure the shelter successfully rehomes as many animals as possible, including raising money for adoption, spay and neuter fees and special medical care.

“It just simply proves the shelter doesn’t have enough space for all the animals it needs to take in,” Litchfield said. “It’s just difficult for the residents because it forces them to go to other shelters or it forces them to abandon their animals rather than using a public service.”

Litchfield’s husband, David Litchfield, said he’s convinced the county needs to scrap whatever plans it’s using for the shelter and start over.

“They’ve taken so much out of it, and they still don’t have the money to sign the contract,” David Litchfield said, adding: “The county needs to start a new bidding process that includes every iota of what was in option C.”

At the existing shelter, Angry spent about an hour touring its “cat condos” and chain-link-fenced dog kennels, which were loud with barking but mostly held the recommended one dog each.

Afterward, Angry said he was most alarmed by an area off limits to the public (and the press) dubbed “the break room.”

It’s actually a portable trailer the shelter uses not only for employee break space but also laundry and animal food storage. The trailer was damaged by flooding and suffers from a mice infestation that’s been tough to beat, said shelter manager Suzette Kapp.

Angry said the area has a pungent smell that was almost intolerable. “Oh my god, oh my god,” Angry said to Cleveland after seeing the space. “That’s just unacceptable. That has a smell I don’t think is ever going to go away.”

Angry said he’s willing to spend a bit more on the shelter to deliver the kind of facility the community needs because taking care of animals is an important part of taking care of county residents. Many of the county’s more vulnerable residents, including veterans, benefit from having companion animals, Angry noted.

“There’s money we want to spend on everything,” he added. “But we’ve already allocated this money to do this, so my thing is: Let’s just do this.”

With 130 felines in its care, Prince William shelter says no more cats

Prince William County is getting a new animal shelter and it will be the much-touted, $14.2 …

After long delays, plans for Prince William County’s new animal shelter are moving forward with about $1.1 million in cost-savings adjustments…