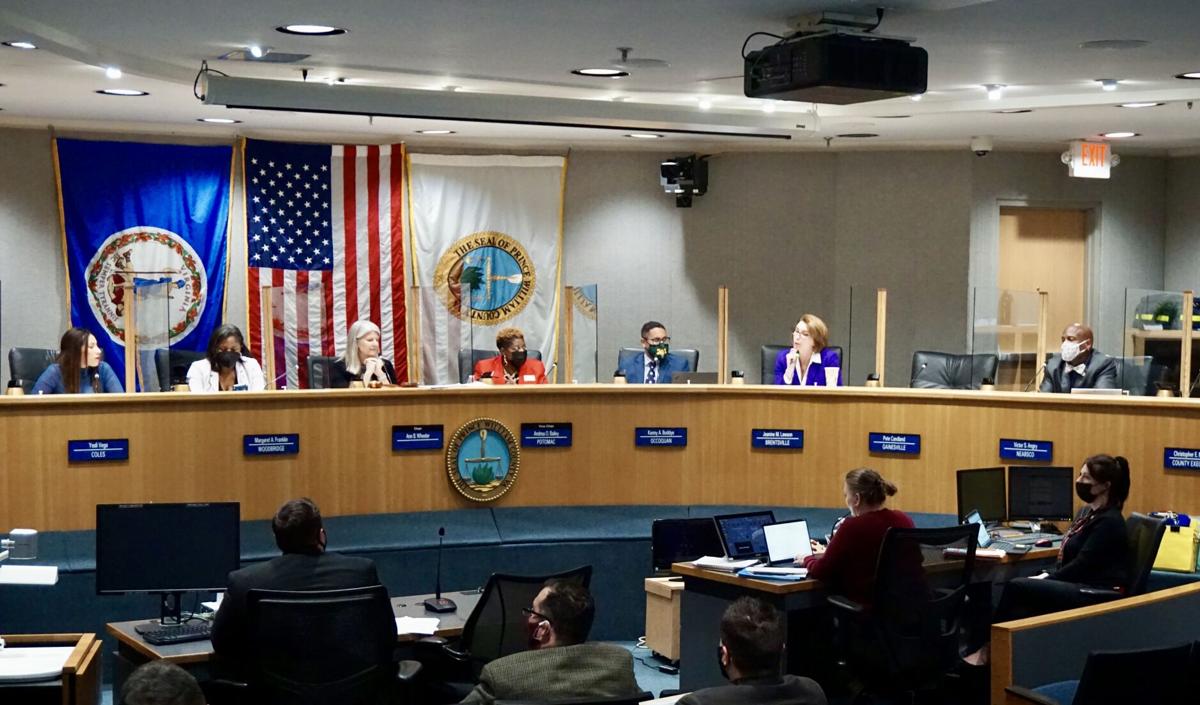 The Prince William Board of County Supervisors during a recent meeting at the James J. McCoart Administrative Building. 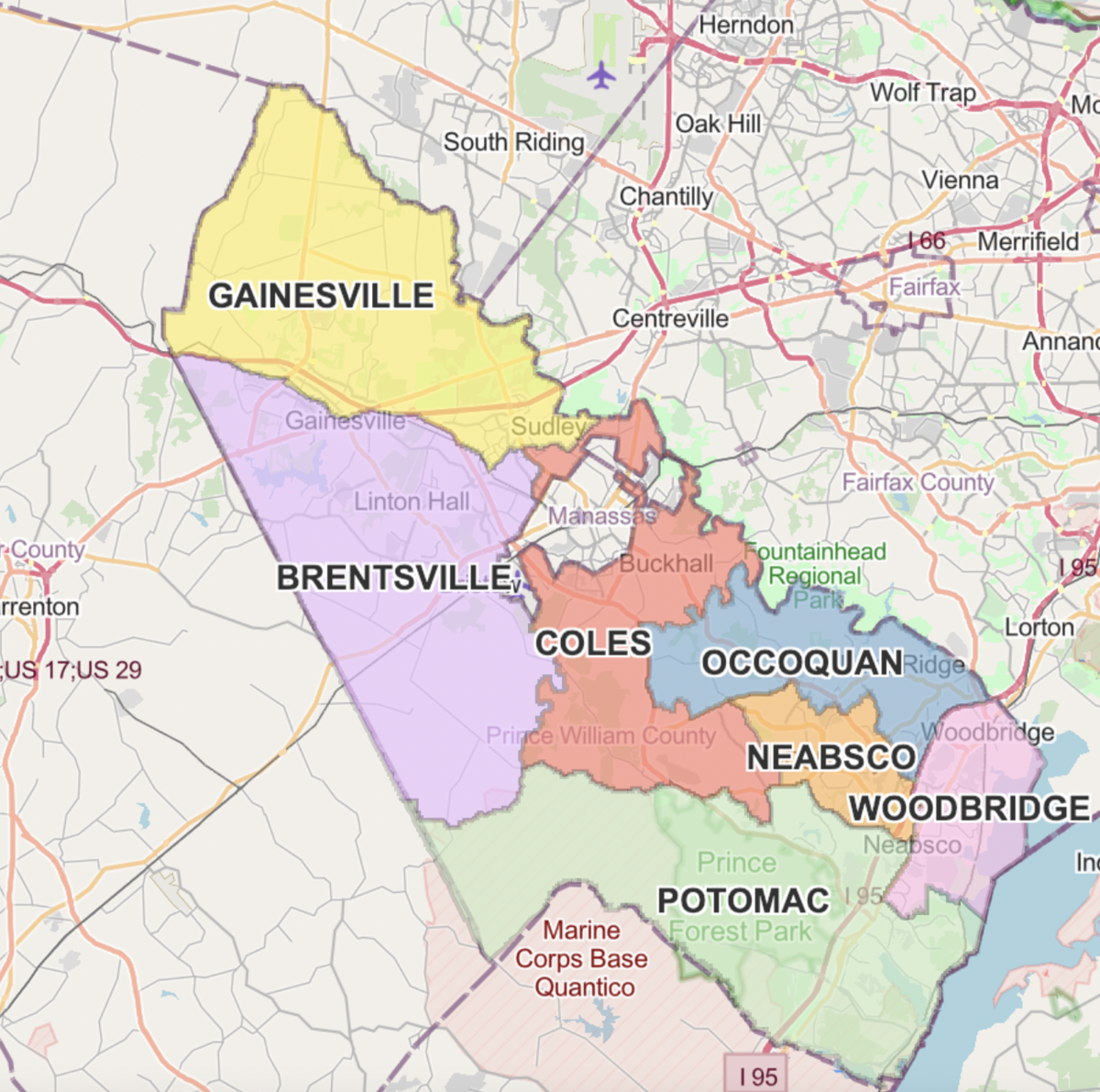 A map of the new Prince William County magisterial districts approved by the supervisors on Tuesday, Dec. 21. 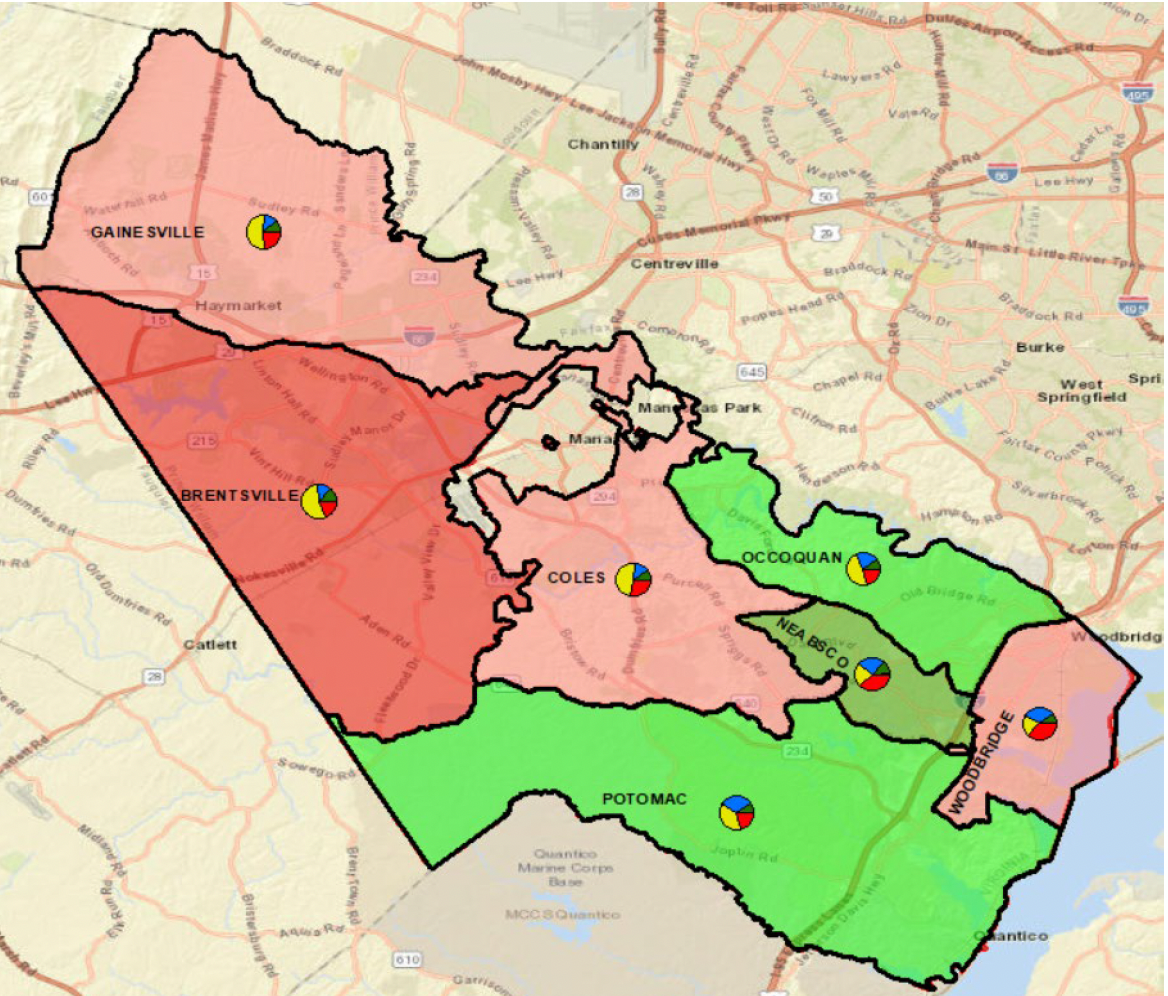 A map of the current Prince William County magisterial districts.

Thousands of Prince William residents – although only a small percentage of the total population – will live in new county magisterial districts under redistricting maps recently approved by the board of county supervisors. The biggest changes occurred in the Coles and Occoquan districts and sparked accusations of partisan gerrymandering from the board’s Republican minority.

The county must redraw its magisterial district boundaries every 10 years to coincide with the U.S. Census. Existing district lines were adjusted so that each magisterial district’s population will be roughly equal. The new districts will take effect in the 2023 local elections for the board of county supervisors and school board.

Prince William County supervisors voted Tuesday, Dec. 21 along party lines, 5-3, to adopt the new district lines. The maps were drawn by independent redistricting firm ARCBridge Consulting and Training Inc., and adjusted by some of the supervisors before the vote.

Prince William County’s redistricting process required the shuffling of residents between districts because some districts in the county have grown much more quickly than others. Based on the current population of the county, each district needs to have about 69,000 residents.

“Are the maps fair representations of the people in the county? I think they are. I truly believe that,” said at-large board Chair Ann Wheeler (D). “The maps actually changed very little, which is ironic. We could have had sweeping changes throughout the county like we did with our state and delegate districts and there were very few changes.”

The boards three Republicans, Supervisors Yesli Vega, R-Coles, Jeanine Lawson, R-Brentsville, and Pete Candland, R-Gainesville, voted against the new district boundaries over what they said was political manipulation by the board’s Democratic majority. The dispute arose over the redrawing of the Occoquan District, which took in several thousand residents from the Coles District to make the populations of both districts close to equal.

The Occoquan District takes in an estimated 7,000 new residents west of Hoadly Road who are currently in the Coles District, and the Coles District takes in an estimated 2,500 residents from the Yates Ford precinct, which is currently in the Occoquan District, according to Vega. Both of those areas typically vote for Republicans based on past election results.

The two Hoadly Road precincts added to the Occoquan District from the Coles District voted for Vega by more than 20 points each in the 2019 election, which was the last time the county’s supervisors and school board members were on the ballot.

Vega said she did not agree with how the new lines were drawn, however. She accused Wheeler and Boddye of manipulating the political boundaries in the Coles and Occoquan districts to benefit Boddye in the upcoming 2023 election and accused Wheeler of interfering with the work of the independent redistricting team hired by the county.

“Who does the map benefit the most? Supervisor Kenny Boddye, who won his last election in 2019 by a little more than 200 votes,” Vega said. “This is why I cannot support this sham of a redistricting process. This process was going beautifully and it should have kept going the way that it was without the interference of the chair.”

Lawson said the changes were made for “political gain” and “political manipulation.”

Boddye responded that adding precincts west of Hoadly Road would not be politically advantageous for any Democrat running in the Occoquan District and would actually benefit Republicans. Boddye said the changes add a total of 472 Republican voters to the Occoquan district based on recent election cycles.

“The additions to the Occoquan district in no way secure a more friendly environment for Democrats. As such, I am a much more interested in discussing how we can best ensure that the schools, businesses and communities in these areas may thrive in the future,” Boddye said.

Supervisor Victor Angry, D-Neabsco, said the precincts added to the Neabsco District from the Occoquan District would help keep several communities in the “Dale City small area plan,” a planning blueprint approved by the supervisors last year, within the Neabsco District.

The Neabsco District also gained several precincts from the Coles District in the mid-county area so that its population will be closer to equal to that of the other districts in the county.