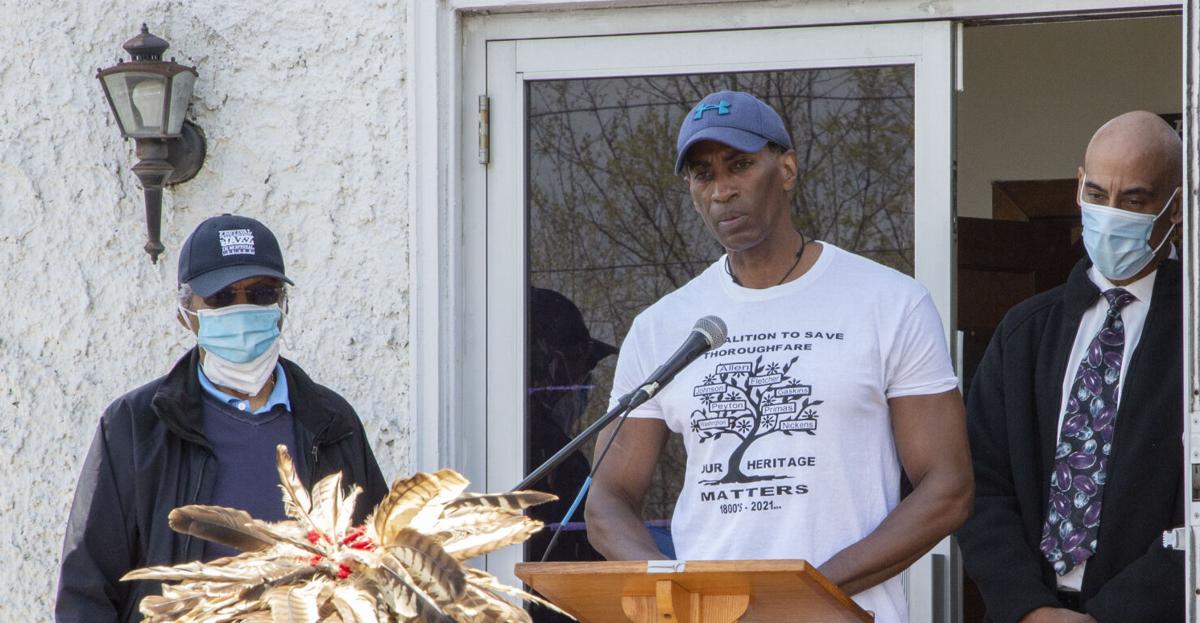 Frank and Dulany Washington answer questions from those assembled outside Oakrum Baptist church on Sunday, April 25, for an update on the cemeteries in Thoroughfare. 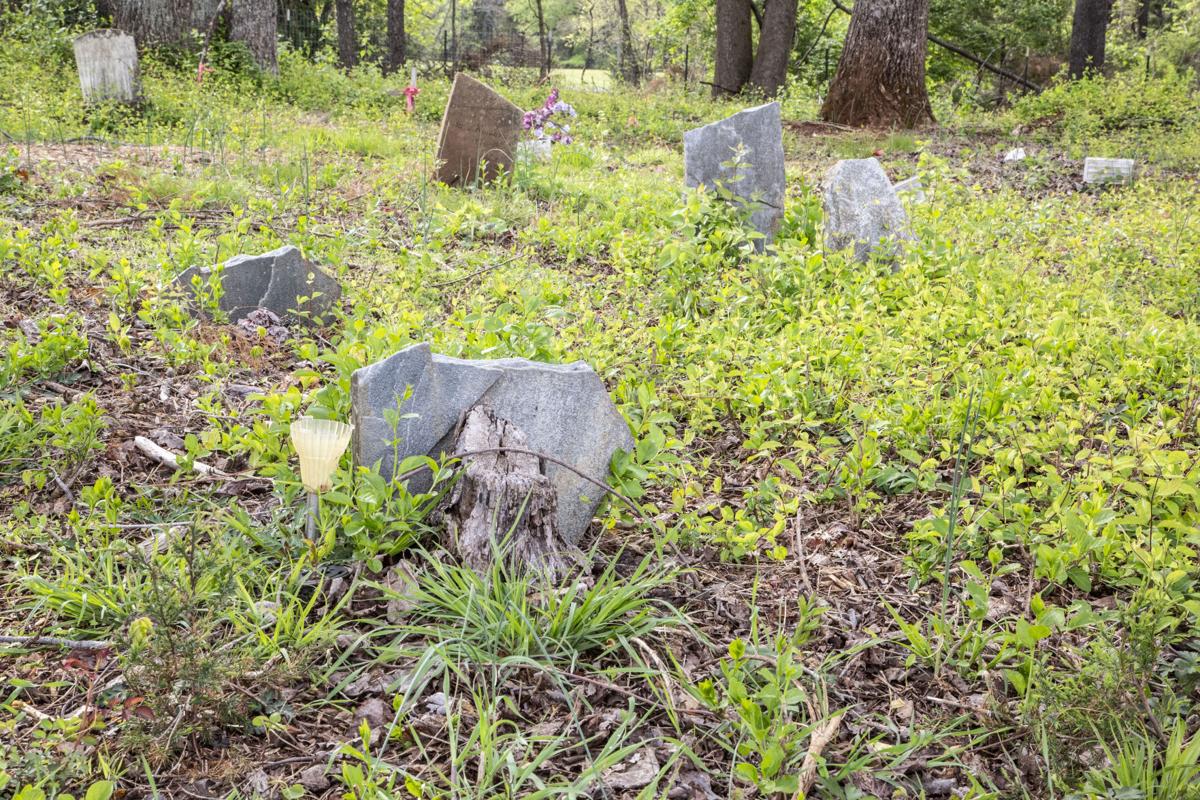 Thoroughfare community members first became concerned about blocked access to gravesites in the Peyton Community Cemetery. Most burials there are marked with unmarked field stones. Photo by Robin Earl.

Prince William supervisors pledged Tuesday to change how the county protects historic cemeteries and gravesites after it was discovered that a local brewery cleared land believed to hold an estimated 75 to 100 century-old graves with ties to Thoroughfare – a historically African American and Native American community near Haymarket.

Supervisor Pete Candland, R-Gainesville, promised during the board’s May 4 meeting “to hold the county accountable” for not preventing the damage and asked county staff to determine how the land was cleared -- apparently without the owners of the Farm Brewery at Broad Run knowing the gravesites were there.

Candland said the county must determine if new policies are needed to prevent such actions from happening again.

“It angered me and it broke my heart to see what happened there,” Candland said of the damaged gravesites. “Part of the accountability is understanding how the county fell short and how we can address it.”

Several other supervisors similarly expressed their regrets about the damaged historic gravesites and agreed with the need for more protections. They tentatively agreed to discuss the matter further during their May 18 meeting.

“I think we are all very sorry when anyone’s family gravesite is desecrated,” said Board Chair Ann Wheeler, D-At Large.

The supervisors’ pledge was welcome news to Frank Washington, who grew up in Thoroughfare and began sounding the alarm about threats to family cemeteries in the area last month. Thoroughfare was a community of former slaves and their descendants, as well as Native Americans, that current residents say was largely self-sufficient after the Civil War and well into the 1900s. The area is now best known by Thoroughfare Road and Oakrum Baptist Church, which is led by Frank Washington’s brother, R. Dulany Washington.

Frank Washington became concerned weeks ago about some older family cemeteries when he found a boulder and a locked gate blocking a gravel road used to access the Peyton Thoroughfare Community Cemetery, which is located on land adjacent to the Farm Brewery at Broad Run at 16015 John Marshall Highway.

Washington also found surveyor’s flags around a nearby group of gravesites, leading him to believe the area is threatened by pending residential development.

But Washington said Tuesday that even he did not initially realize that the area recently cleared by the brewery contained what is known as the “Scott Cemetery.” Washington said he was informed of the damage by county archeologist Justin Patton while the two were investigating a different cemetery.

Washington said the clearing happened, however, at about the same time the boulder and locked gate appeared.

“[Patton] and I were there looking at a different cemetery,” Washington said. “But I started putting the pieces together and connecting the dots because the boulder appeared and the access was blocked at about the same time they bulldozed the lot.”

The Scott Cemetery is included on a county map of historic cemeteries but is not noted on the parcel’s deed. Patton said Tuesday the county would have told the brewery’s owners about the Scott Cemetery if they had applied for the required permit before clearing the land.

“When the clearing was done, they did not get a land-clearing permit, so there was no county review,” Patton said.

Bill and Michelle DeWitt, the owners of the Farm Brewery at Broad Run, have been cited with a county zoning violation because the land was cleared without a permit. The clearing was also investigated by the Prince William County Police Department, which handed its findings over to Commonwealth’s Attorney Amy Ashworth to consider for possible criminal violations.

As of Wednesday, April 28, Ashworth determined there was no evidence “to indicate any willful intent on the part of the property owner to desecrate gravesites” and that no criminal charges would be filed, according to a statement Ashworth’s office emailed to the Prince William Times.

In his remarks Tuesday, however, Candland said the matter is still under investigation by Ashworth’s office.

In an interview last month, Michelle DeWitt said the land was cleared to plant sunflowers near the brewery. She also said the brewery never intended to permanently block access to the Peyton Thoroughfare Community Cemetery, which would be a violation of Virginia law, and that the brewery offers an alternate access point. DeWitt also said she was not aware – at that time -- of any gravesites on the brewery’s property.

Frank Washington says he never knew about the alternate access to the cemetery and said his calls to the brewery to inquire about the boulder and locked gate were not returned.

‘It deserves its place in history’

The DeWitts purchased the 1-acre lot containing the Scott Cemetery for $120,000 in July 2020 at a public tax auction, which was conducted because real estate taxes had not been paid on the property since its last resident, a member of the Scott family, died in 1995, according to an April 26 email Deputy County Executive Rebecca Horner sent to the board of supervisors that was obtained by the Prince William Times through a Freedom of Information Act request.

The county began efforts to sell the land in 2017 to recoup more than $43,000 in back taxes. Heirs of the final owner were contacted prior to the sale, Horner’s email said.

The Scott Cemetery is believed to cover just a portion of the 1-acre lot. It was first documented by local historian Ron Turner, who was hired by the Prince William County Historical Commission in the late 1990s to identify and inventory historic cemeteries in the county as a means of protecting them from future development.

In a recent interview, Turner said he called the cemetery the "Scott Cemetery,” because the Scott family owned the land at the time. But Turner said it is “a very old cemetery” that likely pre-dates when the Scotts purchased the land in the mid-1940s.

Turner said he was able to identify the cemetery only by ground depressions and field stones, which were commonly used to mark burials. Turner said he doesn’t know who might be buried there. “Could it be a cemetery of slaves or former slaves? I have no idea,” he said.

There was no mention of the cemetery on either land records or deeds for the property dating back to at least 1892, according to a search performed recently by Don Wilson, a local historian with the Prince William Public Library System’s Ruth E. Lloyd Information Center.

The zoning violation has not yet been resolved. The DeWitts are in talks with county officials regarding hiring an archeology firm to delineate the cemetery, map individual burials, erect fencing around its perimeter and preserve access, Horner told supervisors in a May 4 email, also obtained by the Prince William Times via a FOIA request.

Horner said the county would be contacting the Thoroughfare community through Frank Washington to involve them in the process.

“Outreach to Frank Washington and through Frank Washington to the Thoroughfare community is necessary to get their opinion on what they think the Scott Cemetery should look like,” Horner wrote.

On Tuesday, Washington said he would first and foremost like to see the Scott Cemetery restored. Beyond that, “the whole area,” meaning Thoroughfare, “should be deemed historical,” Washington said.

“We’re looking for a historical designation as well,” he added. “It deserves it. It deserves its place in history.”

‘Even in death, they have to fight for a name'

Frank Washington says he has visited ancestors, buried in family cemeteries in Thoroughfare,…

Glenn Youngkin, the GOP nominee for Virginia governor, held a campaign event Thursday evening at a brewery at the center of a local controvers…

The unincorporated Town of Thoroughfare is small but rich with history. It’s home to the Oakrum Baptist Church, which was founded by former sl…