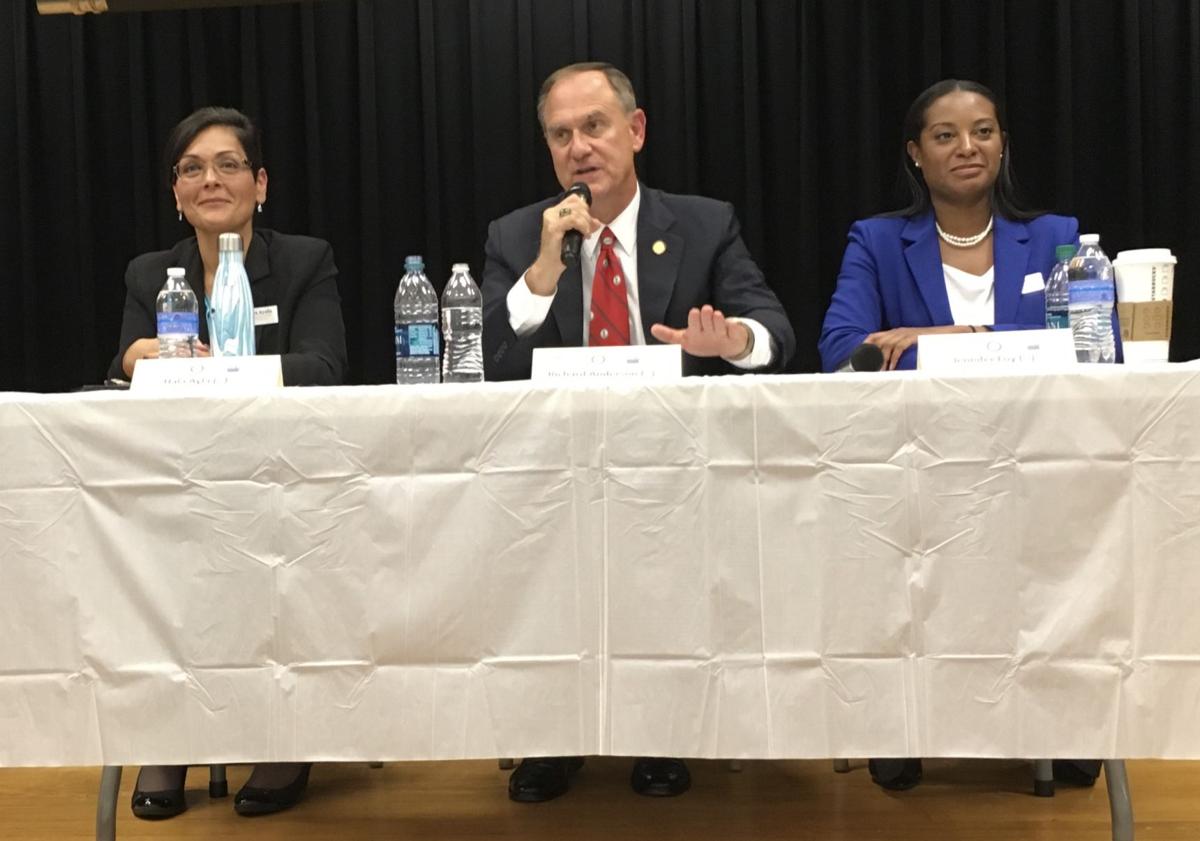 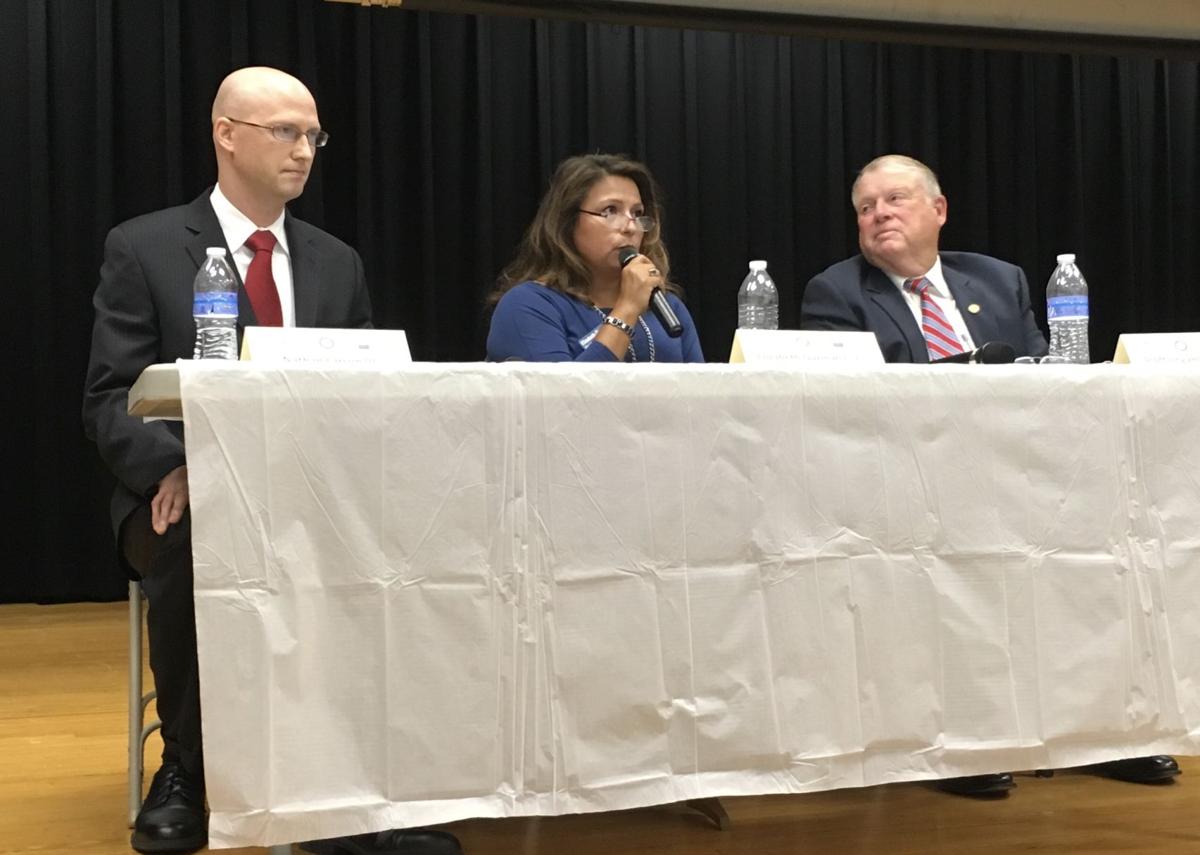 The panel discussion, held Oct. 6 at George M. Hampton Middle School in Dale City, was hosted by the Prince William Committee of 100 and local branches of the NAACP and the League of Women voters. The forum offered voters the first chance to hear from most of the candidates vying for the 2nd, 31st and 51st district delegate seats.

The three races are among the most closely watched in the state this year because they feature candidates of diverse backgrounds and because all three districts are among the “Clinton 17” -- seats held by Republican incumbents in districts Hillary Clinton won last November. If elected, both Elizabeth Guzman, a Democrat trying to unseat Del. Scott Lingamfelter in the 31st District, and Hala Ayala, a Democrat vying to defeat Del. Rich Anderson in the 51st District, would be the first Latinas elected to the Virginia General Assembly.

In the 2nd District race, only Democrat Jennifer Carroll Foy attended the forum. Foy, 36, is an Arlington County public defender who lives in Woodbridge. She faces Mike Makee, a 48-year-old retired Navy commander who works as a defense contractor and lives in Stafford. In an email, Makee said he could not attend the forum because of a scheduling conflict. Both are vying to replace Del. Mark Dudenhefer, a Republican who is not seeking re-election.

Medicaid and state lawmakers’ refusal to expand the program in Virginia was a hot topic during the discussion.

All three Democratic candidates argued in favor of expanding Medicaid under the federal Affordable Care Act. An estimated 400,000 Virginians, including about 12,000 in Prince William County, would be eligible for Medicaid coverage if the state agreed to allow adults making up to 138 percent of the federal poverty level, about $26,350 a year for a family of three or $15,420 for individuals, to enroll in the program. Currently, no non-disabled, childless adults in Virginia are eligible for Medicaid no matter how little they make.

Ayala teared up while discussing her own experience as a Medicaid recipient. Ayala, 44, left a 17-year-career a cyber-security analyst with the U.S. Department of Homeland Security and the Coast Guard to run for office. But while pregnant with her now college-age son, she was working at a gas station for minimum wage. Medicaid was “lifesaving” for herself and her son, who suffered several medical complications, including childhood diabetes, she said.

“When we have folks in the General Assembly voting against life-saving legislation, I take it personally,” Ayala said. “This is a humanitarian issue. It should not be politicized.”

Anderson, 62, said Medicaid is already claiming 23 percent of Virginia’s budget and will need a $300 million boost next year. Anderson said he supports funding what he called the state’s “health care safety net,” money the state sends free clinics that treat the uninsured.

Lingamfelter, a 66-year-old retired U.S. Army colonel who has held his seat since 2002, said the state would need to commit an additional $560 million to expand Medicaid.

But Foy, who recently endured her own difficult pregnancy and delivered twin boys prematurely in July, shot back, saying, “People are dying because of partisan politics and obstructionism and it must stop.”

“How do we say no to 400,000 people who need access to quality health care?” Foy added. “You should not have to make a decision between paying your mortgage and going to the emergency room.”

Nathan Larson, an independent challenging Lingamfelter and Guzman, said he would cut all government subsidies to health care and abolish the Federal Drug Administration.

“Let consumers take medications at their own risk,” he said. “Let the individuals choose.”

Larson, a 37-year-old self-employed accountant from Fauquier County, told the crowd he is “running on a Libertarian platform.”

But his candidacy was disavowed by the Libertarian Party of Virginia earlier this year because of his extreme views, which include his support for legalizing child pornography and child marriage. Larson is a convicted felon who served several months in federal prison in 2009 for threatening to “kill the president” in emails sent to the U.S. Secret Service in December 2008.

During the forum, Larson also spoke in favor of abolishing public education and privatizing all police departments and the operation of highway construction and maintenance.

Anderson said he believed the state can fund charter schools without decreasing funding to public schools. Lingamfelter stopped short of advocating specifically for charter schools but said Virginians need to “stop the bickering” about whether students attend public, private, charter or homeschools.

“We need to stop the bickering and start the wickering,” Lingamfelter said. “We need to wicker a basket of solutions … so parents can decide what is best for their child.”

UPDATE: Delegate candidate convicted in 2009 of threatening to kill the president

In his opening remarks during a Friday candidate forum in Woodbridge, Del. L. Scott Lingamfe…