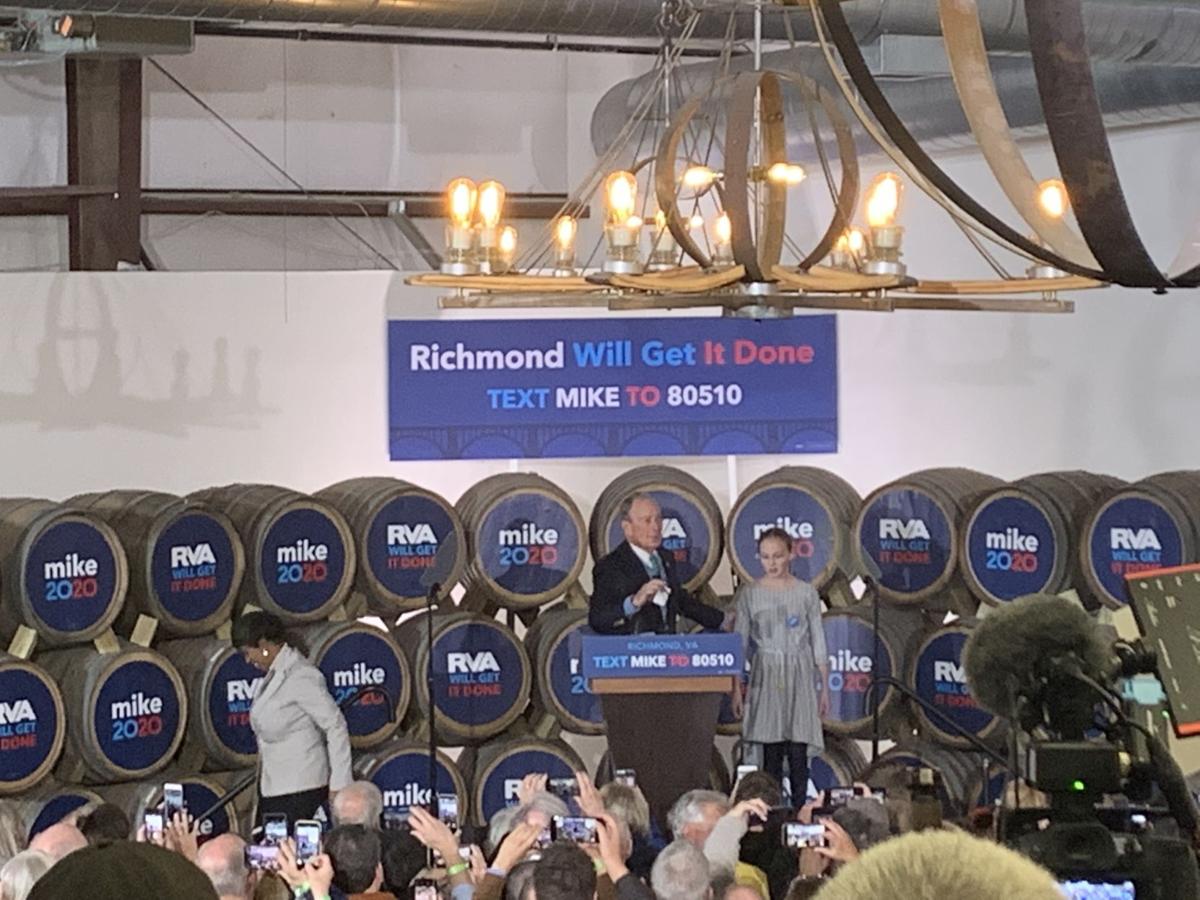 Mike Bloomberg speaks before an estimated 900 people at the Hardywood Park Craft Brewery in Richmond on Saturday, Feb. 15. 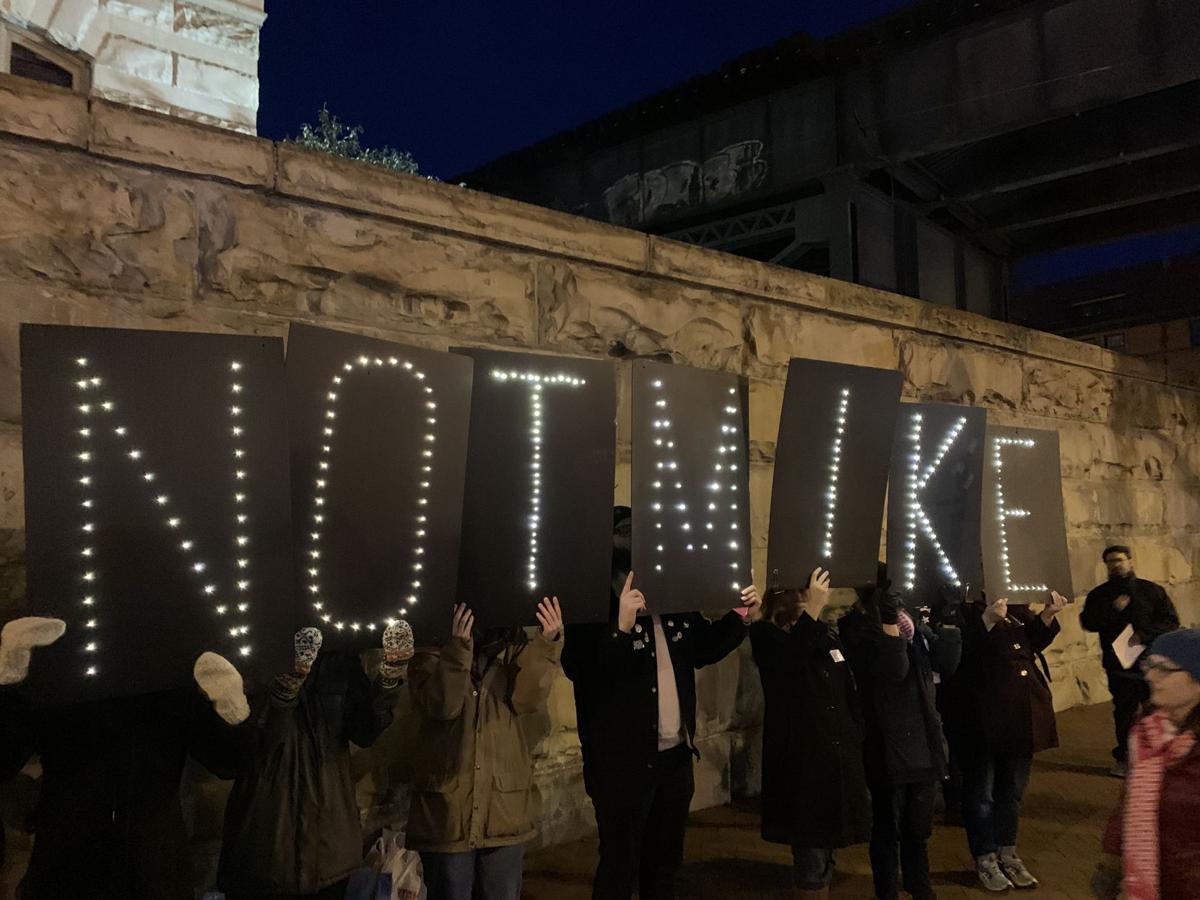 Roughly two weeks before Virginia voters head to the polls on Super Tuesday, former New York Mayor Mike Bloomberg was in Richmond looking for support from many of the lawmakers whose campaigns he helped fund.

On Saturday, Feb. 15, the Democratic presidential candidate campaigned around the city, stopping first for an afternoon speech at Hardywood Park Craft Brewery. The event attracted about 900 people, according to his campaign staff.

In the evening, Bloomberg attended the Blue Commonwealth Gala at Main Street Station in downtown Richmond. The gala is an annual fundraiser hosted by the Democratic Party of Virginia.

“This is the event that keeps the lights on,” said Andrew Whitley, executive director of the Democratic Party of Virginia.

During the Hardywood and Blue Commonwealth Gala events, Bloomberg apologized for the controversial stop-and-frisk policy in place when he was New York’s mayor. He said the policy disproportionately affected young men of color.

Stop and frisk is a procedure where a police officer stops a person on the street if they believe they’re armed and pats them down to search for weapons. In 2011, during Bloomberg’s ninth year as mayor, the New York City Police Department stopped over 685,000 people under the stop-and-frisk policy, according to the New York Civil Liberties Union.

A majority of those searches were performed on Black or Lantinx people (87%). The NYCLU said that 88% of people stopped were innocent.

“I defended it for too long, I think, because I didn’t understand the unintended pain it caused to young black and brown kids and to their families,” Bloomberg said. “And for that, I have apologized.”

Bloomberg pledged that if elected, he’d prioritize dismantling systems of bias and oppression. He did not elaborate what those systems were or how he would change them.

The Virginia Citizens Defense League, a gun rights advocacy group, protested at both of Bloomberg’s Richmond events. VCDL protesters, who are opposed to Bloomberg’s gun control policy, entered Hardywood brewery and called Bloomberg a fascist while he was speaking. They were removed from the brewery by Bloomberg supporters and staff and resumed their post outside. They did not enter Main Street Station but lined the street outside, where other anti-Bloomberg protesters were gathered.

Anti-Bloomberg sentiment was also visible inside the gala. Jasmine Leeward, a board member of Richmond For All, approached the podium while Bloomberg was speaking and attached a sign that read: “He protects racist systems, will you?”

It was quickly taken down, and Leeward was escorted away from the stage. Richmond For All is a coalition that fights for housing, education, environmental rights and racial justice.

Leeward explained the sign, saying that Bloomberg protects racist systems by only offering an apology and “not actually repaying for the harms that were caused by his stop-and-frisk policies.”

“I saw a lot of politicians, both at the city and state level, kind of forgiving or not being truthful and honest about how dangerous he would be as a president,” Leeward said. “And so I did what I felt like I needed to do, which was to talk to the people who have the power to get him elected and ask them if they support racist systems and protect them, as I feel Mike Bloomberg does.”

After the sign was removed, Bloomberg said, “It’s always nice to be welcomed.”

At the gala, six Democratic candidates for president were represented by surrogates, influential people who campaign for candidates at events, but Bloomberg was the only candidate who appeared. Virginia’s key leaders were in attendance, including Gov. Ralph Northam, Lt. Gov. Justin Fairfax, House Speaker Eileen Filler-Corn, Attorney General Mark Herring, and Virginia Congresswomen Elaine Luria, Abigail Spanberger and Jennifer Wexton, all Democrats.

Bloomberg received support from Filler-Corn during her speech at the gala.

Bloomberg said winning in Virginia is a key part of his electoral strategy.

Everytown for Gun Safety, a gun control advocacy group largely funded by Bloomberg, has spent $3.8 million since 2017 to help usher in Democratic legislators. After the 2019 elections, the Democrats gained a majority in Virginia’s executive and legislative branches for the first time since the early ’90s.

Bloomberg said that defeating President Donald Trump is one of the main reasons he entered the race.

Charles Bissett, an Army veteran who is leaning toward voting for Bloomberg, said he thinks Bloomberg will have the best chance of implementing Democratic policies. In particular, Bissett supports how Bloomberg handled education reform as mayor of New York.

Under Bloomberg’s administration, the graduation rate for high school students went from less than half to nearly two-thirds, according to a 2013 article by The Atlantic. Bloomberg also said he raised teacher salaries in New York by 43%.

Bloomberg ranks third in an average of national polls for the Democratic presidential nomination, according to polling data from RealClearPolitics that also has Sen. Elizabeth Warren closely trailing him.

This guy is tied to big business and Communist china connection. Dont be fooled do your research people.