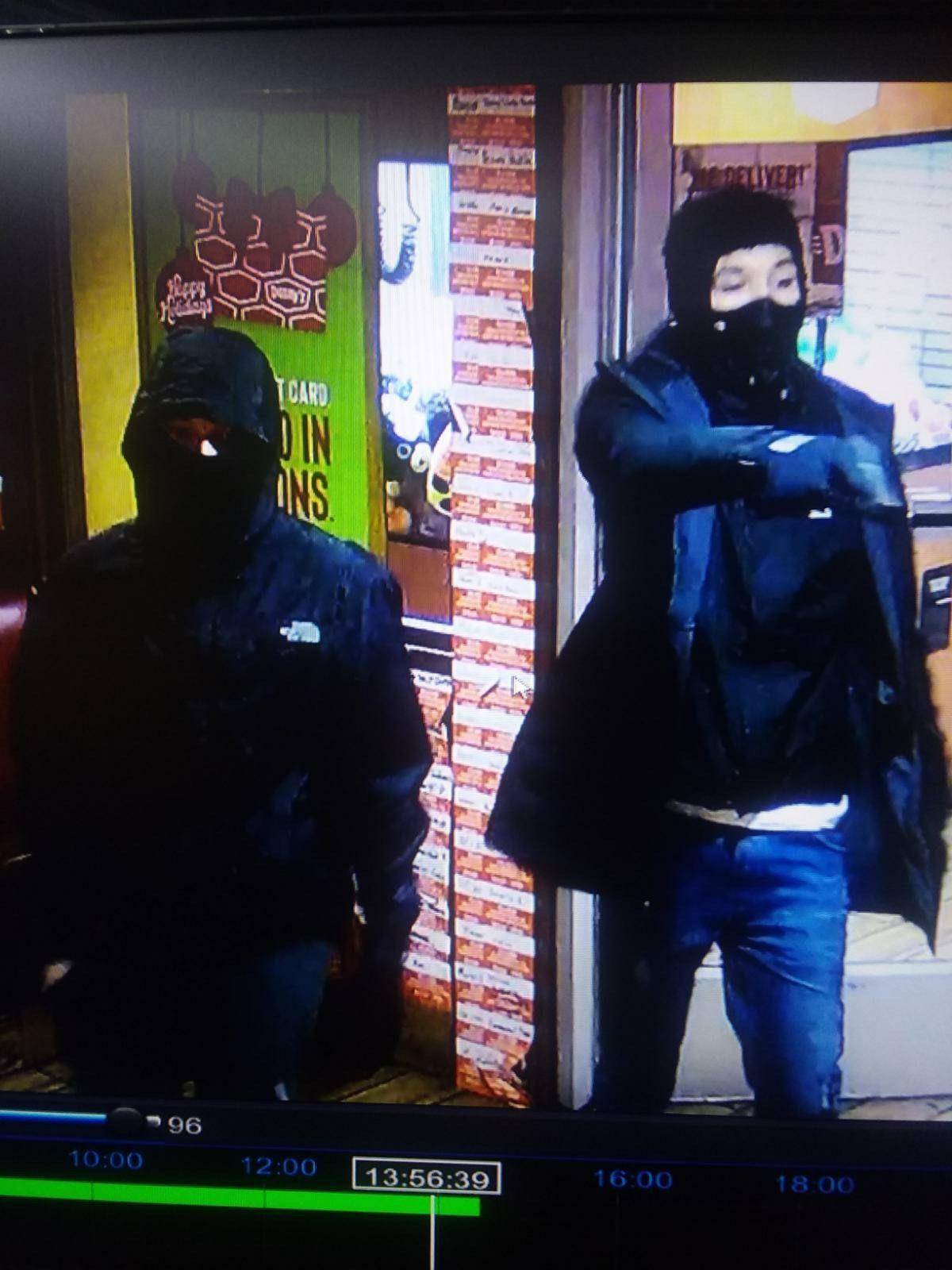 Do these people look familiar? The images of two armed robbers involved in a fatal double-shooting at Denny's restaurant early Thursday, Dec. 26, were captured on surveillance video and shared by police. 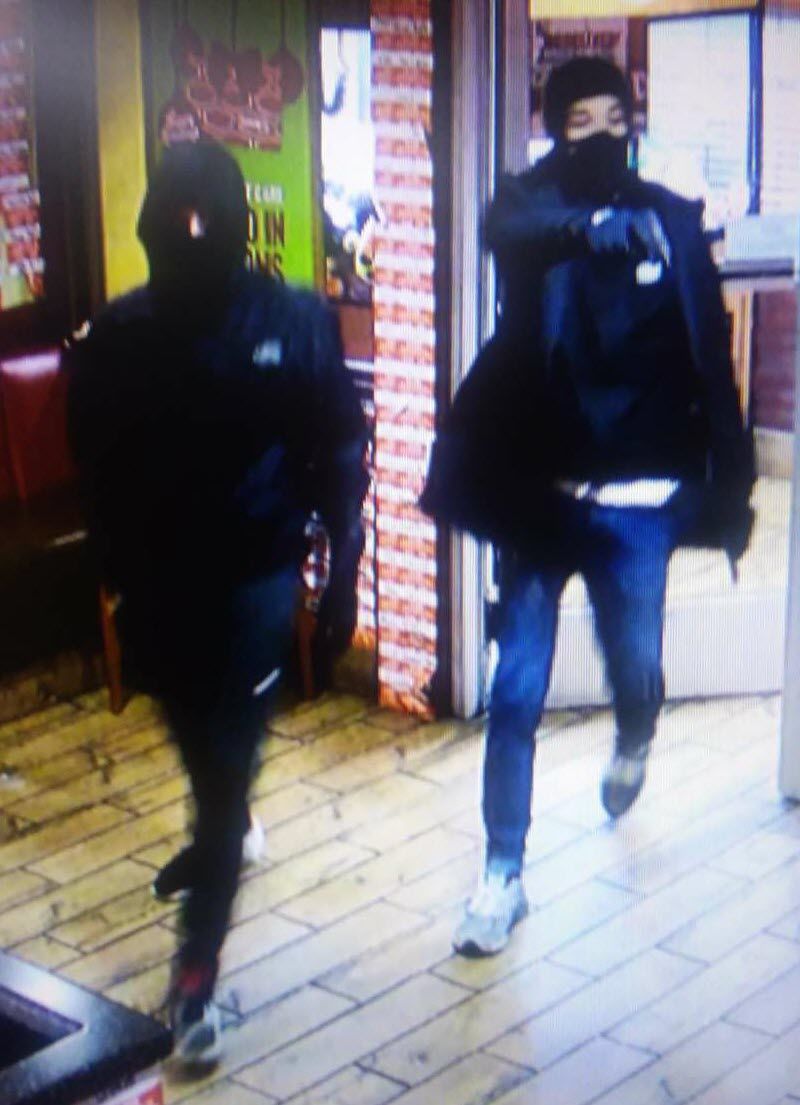 Police are looking for these two men in a double-shooting early Thursday that claimed the life of of one man and injured another.

“A heinous, callous act” is the way Prince William County Police Chief Barry Barnard described the overnight double-shooting at a Manassas Denny’s Thursday that claimed the life of a 56-year-old food-delivery man and left a restaurant patron with serious injuries.

During an afternoon press conference, Barnard described the events leading up to the shootings and said police now believe the suspects – who remained at large Thursday afternoon – might have been involved in three earlier armed robberies at Manassas-area businesses in recent days.

Barnard also announced a $10,000 reward for information leading to the arrest of the two suspects and decried what he repeatedly called a “heinous, callous” crime.

“You ought to be able to eat in a restaurant, comfortably, safely, and not have to have people come in and then rob and shoot people who are fully cooperating,” Barnard said. “It’s just a callous, heinous act.”

Barnard said the man who was killed, Yusuf Ozgur, 56, of Manassas, was shot while he was arriving at the restaurant, located at 8201 Sudley Road.

One suspect hit Ozgur over the head with a baton and the other shot him, Barnard said.

Ozgur was transported to an area hospital where he died of his wounds later Thursday morning.

The first person shot by the suspects, a 34-year-old Rixeyville man, was at the restaurant eating with other people when the gunman shot him in the upper torso, Barnard said.

The man, who police have not identified, was sitting on the floor, fully cooperating with the suspects’ demands, Barnard said.

The man is expected to survive his injuries, according to updated information police provided during Barnard’s press conference.

The suspects fled on foot shortly after shooting the second victim, Ozgur. The men were only in the restaurant “a few minutes,” Barnard said.

Officers, including a police K-9 and troopers from the Virginia State Police, arrived at the Denny’s restaurant at 2:25 a.m. They searched for the suspects, who were not located.

The suspects have been described by witnesses as two black males in their late teens or early 20s. Both are between 5’10” and 6 feet tall and weigh about 180 pounds. They were last seen wearing all black or dark colored clothing.

Police released a video of the two men that shows them entering the restaurant and immediately brandishing a handgun. The video does not include sound, but people can be seen lying on the floor as the men walk through the restaurant.

Barnard said the suspects’ descriptions, actions, weapons used and time and location of the incidents led police to believe the suspects might have been involved in armed robberies that occurred at Bowl America, the Comfort Inn and Walgreens in recent days.

If they are connected, the suspects have “increased their level of violence,” Barnard said.

Barnard urged anyone with even the smallest bit of information that could be related to the robberies to call police and report it.

“It doesn’t matter how insignificant you think the information is. Let us evaluate that,” Barnard said. “We often solve crimes with just a little bit of information.”

Anyone with information regarding this incident is asked to contact the Prince William County Police Department tip line at 703.792.7000 or submit a webtip to: www.pwcgov.org/policetip.

Police provided descriptions of the earlier incidents they now believe are related to the Denny's double-shooting:

On Tuesday, Dec. 24, at 12:10 a.m., officers responded to the Walgreens at 14095 Jefferson Davis Highway in Woodbridge to investigate a robbery. A store employee reported that two masked men entered the business and approached the counter.

During the encounter, one of the suspects brandished a firearm and escorted an employee to the back office where he demanded money. The other suspect demanded money from the cash registers. Both suspects fled on foot prior to police arriving at the business. No injuries were reported. A police K-9 searched for the suspects who were not located.

On Monday, Dec. 23 at 1:13 a.m., officers responded to the Comfort Inn Suites at 7530 Williamson Boulevard in Manassas to investigate a robbery.

An employee told police  two unknown men entered the hotel lobby where one suspect went to the back office and approached an employee. During the encounter, the suspect brandished a firearm and demanded money. The second suspect went behind the counter, opened the cash register and took money before both men fled on foot.

No injuries were reported. Officers, including a police K-9 and helicopter assistance from Fairfax County police, searched the area for the suspects who were not located.

On Saturday, Dec. 21 at 1:02 a.m., officers responded to the Bowl America located at 10641 Balls Ford Road in Manassas to investigate a robbery. The manager reported to police that the business was closed with employees still inside, when two masked men entered and approached the counter.

Yusuf Ozgur, the 56-year-old father of two who was shot and killed the day after Christmas during an overnight armed robbery at a Manassas-are…

UPDATED: One suspect arrested in connection with the fatal double shooting at a Manassas-area Denny's Dec. 26 was arrested during a traffic st…

These two are local. They came from the direction of Irongate. They were familiar with the inside of Dennys restaurant. A review of security cameras footage for the last few weeks would likely show them in the restaurant as normal customers. Same thing for the bowling alley and maybe the Comfort Inn's security cameras footage. The entire thing has the earmarks of street dealer plus at least one of them a drug user. Street dealers favor 40 caliber sigs and carry collapsible batons. The one with the gun might be a female. They both have very light colored skin. They have probably cased other nearby restaurants and businesses that have single entrances, stay open late, have no security guards and/or floor safes like 7-Elevens and service stations do.

As far as the public's ability to help goes it would work much better if the incoming Democrats worked with the public instead of against them when it comes to crime prevention. When the state and local organizations are able to reasonably protect the public from this kind of violence would be a better time than running their jaws by tyrannically threatening everyday citizens about their Second Amendment rights going into the New Year.

A “See Something Say Something” public awareness policy might help a lot but it will not do any good when the public knows that they will be greeted with a, “Mind your own business they have as many rights as you do” dispatcher. If you want to see how well in can work in action visit Quantico Marine Corps Base, dial their widely advertised See Something Say Something phone number and see if you can count to ten before there are at least ten military vehicles surrounding you or whatever / whoever you reported.

Strange about your opinion on the See Something, Say Something initiative. Every time I call the non-emergency number to check on something/someone out of the ordinary, they provide an immediate response (typically within 4 minutes, maximum was 8).

In reference to our public officials they ARE working with the public, since they are basing their actions off of what their constituents were letting them know what they wanted. I’m sure for the past 10-11 months you were in contact with your representatives (sarcasm font).

On phone calls I push one (1) instead of two (2). My Spanish is rusty and they no speak English.

As far as sarcasm goes the strangest thing is how that those who have and are selling out our county and our Country believe that they are better, swifter and smarter than everyone else.

It must be nice to have zero accountability for what you post, but I’m not a coward. That would place you in the same category as these cowards to killed an innocent man. #truth

It's time to dial down what you are saying my friend!

Quote: “It must be nice to have zero accountability for what you post, but I’m not a coward. That would place you in the same category as these cowards to killed an innocent man. #truth”